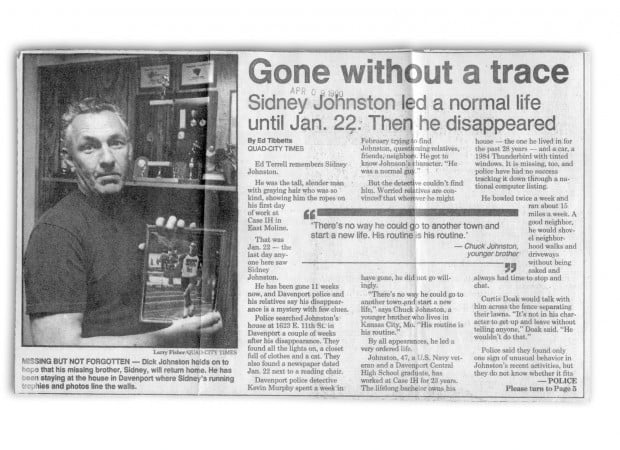 A carport built by Sidney Johnston still stands next to his old house in the 1600 block of 11th Street, Davenport.

But, Johnston and his maroon 1984 Ford Thunderbird have been missing for 20 years.

“I know something happened to him,” Valeria Doak said Friday. She and her husband, Curt Doak, lived next door to Johnston for years.

The Davenport Police Department reopened Johnston’s case this past week. Capt. David Struckman said the department tries to reopen a cold case every six months. After receiving a request from Johnston’s family, detectives decided to take another look at the case. They will begin the investigation by running his Social Security number as well as his car’s Vehicle Identification Number through national databases, Struckman said.

“You wonder where they are and what kind of death they may have met,” he said, referring to missing persons.

Curt Doak used to talk to Johnston over a fence that separates the two yards. His wife used to see him jogging around the neighborhood and working around his house. “He was out doing things all the time,” she said. “He was an outdoors person.”

Then, six months before Johnston’s disappearance, which happened around Jan. 22, 1990, she said something changed.

Late in the summer of 1989, she said a young man and woman began frequenting Johnston’s house, often on Friday nights. She found it unusual because Johnston rarely had company.

By October or November of that year, she began hearing arguments coming from her neighbor’s house that sometimes erupted into shouting and swearing. The last time she heard Johnston’s voice, he was embroiled in an argument with the young male visitor.

“I heard a car door slam,” she said. “His last words, in a real surprised voice, was ‘dirty son of a (expletive),’ then thud.” It sounded like someone had fallen down against something, she added.

“I wish to this day I would have gone out,” she said. “I told myself if I ever heard that noise again, I’d call the police.”

Sidney Edward Johnston, who was 47 when his family reported him missing, would be 67 now.

He was single with no children. He owned his home, in which he lived for 28 years, spending a portion of that time taking care of his mother before she died in the early 1980s. He had five siblings, three brothers and two sisters. Two of his siblings have since died.

“There’s only three of us left,” said the youngest, Chuck Johnston, who lives near Kansas City, Mo. He is convinced that if his brother was still alive at the time, he would have attended his siblings’ funerals.

“I can’t believe he wouldn’t have tried to make contact with us,” Chuck said. “His brother and sister died. He would try to talk to us. I can’t believe he’s out there somewhere and just forgot everything. It’s not his nature.”

The six grew up in Davenport and attended Central High School. Their father died when Chuck was 17, and Sidney, or Sid, became a father figure to the others. “He was always the one, when we ran out of money, we’d go to him,” Chuck said.

Sid, a U.S. Navy veteran, was a saver and usually tight with his money, Chuck said. That is why it seemed peculiar when he learned later that his older brother had begun giving away his money in the months before he vanished.

In fact, relatives believe that Sid may have given away nearly $30,000. Chuck also thought it was unusual that his brother would get in legal trouble involving his finances. But Sid was scheduled to appear before a Rock Island County magistrate on Jan. 23 — the day after he disappeared — for unlawful possession of a bank identification card, police records show.

Relatives told police at the time that they did not think Sid had skipped town.

“If he was in any kind of trouble,” Chuck said, “we always knew we could come to each other when someone’s down.”

A few other details trouble Chuck to this day as he struggles to put pieces of his brother’s life together.

Chuck called the Davenport Police Department early last week. That phone call piqued Struckman’s interest in the case. Like the neighbors, he also pointed to a young man and woman who became an integral part of Sid Johnston’s life in late 1989.

A review of the investigative file at the Davenport Police Department reveals that:

Johnston, a machine operator at Case I H in East Moline, stopped showing up to work after Jan. 22, 1990. His supervisor told police that, two weeks before his disappearance, Johnston had received several emergency telephone calls at work, which was out of the ordinary.

His brother, Richard Johnston, talked to Sid around Christmas 1989. He told police that Sid had asked him for money, which was out of character since the eldest brother was always the one helping out his siblings financially. Sid told Richard, “Don’t ask what it’s for.”

Sid Johnston’s niece, Debbi Crisci, discovered that he had withdrawn large quantities of money from his First Bank savings account on a daily basis over a period of several months in 1989.

During a search of Johnston’s home, police found holes punched in the walls and a door, and a stain on his bed sheets that may have been vomit. There was a folded-up copy of the Jan. 23, 1990, edition of the Quad-City Times in his kitchen and a dish full of cat food on the floor. The family said they thought the house was messier than normal.

A stack of bills showed that Johnston had been contacted by collection agencies on numerous occasions.

Police interviewed neighbors who said a man in his 30s and a young woman were seen stopping by Johnston’s house many times beginning in August 1989. They often heard arguments that included the man asking Johnston for money.

On one occasion, a neighbor heard Johnston shout at the man, “I got no more money. My bank accounts are dry.”

Police interviewed the man and the woman. The man admitted Johnston had given him hundreds of dollars. The woman said she never knew Johnston.

But because the man and the woman both passed polygraph tests, they were never arrested or charged in connection with Johnston’s disappearance.

Johnston, who often ate a late-night breakfast at Ross’ Restaurant in Bettendorf, was last seen there by a cashier on Jan. 25, 1990, three days after he appeared at work for the last time. Police interviewed the cashier, Tracy Liblin, who said Johnston appeared to be upset.

Liblin no longer works at Ross’, and efforts to reach her last week were unsuccessful.

Missing persons cases, especially when foul play is suspected, “haunt you for the rest of your life,” Struckman said.

The Iowa Department of Public Safety lists 31 missing people from Davenport. Two have been missing longer than Sidney Johnston.