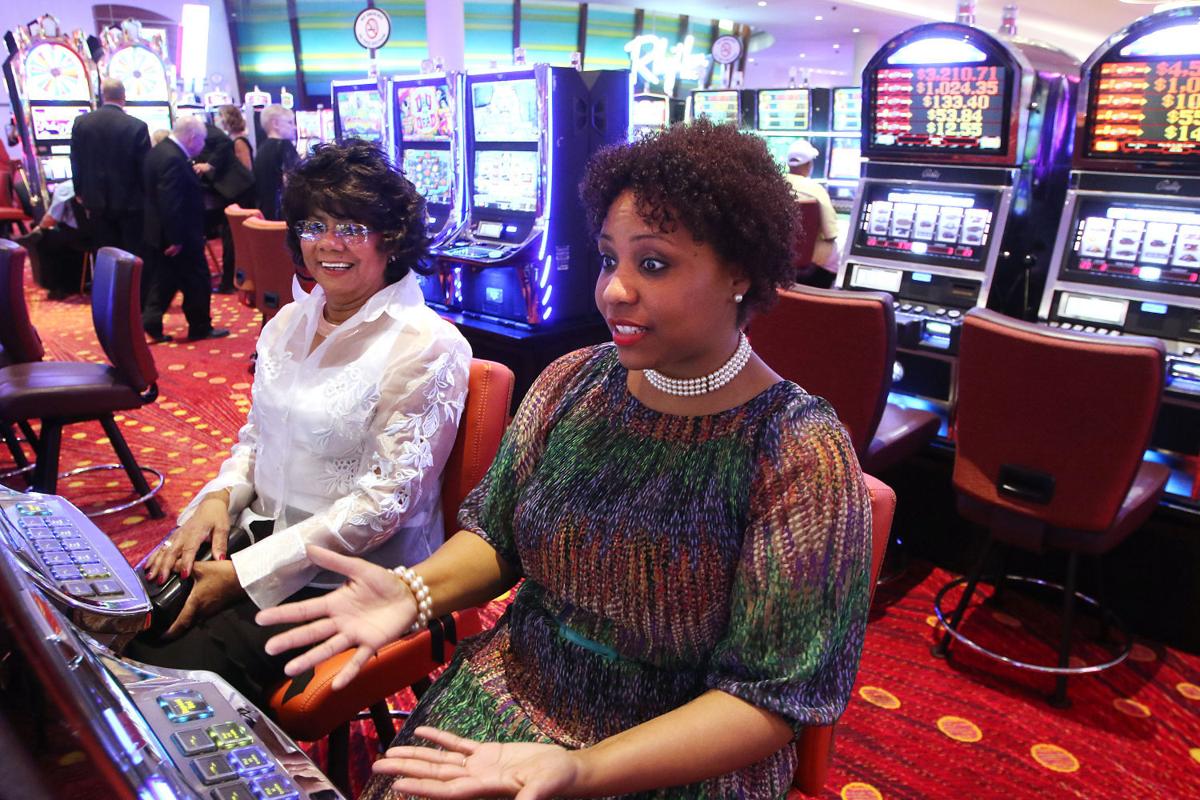 Chanda Washington, right, reacts to winning at the video slot machines Thursday night during the grand opening of the new Rhythm City Casino Resort. With her is Marie Christian; both are from Davenport. For more photos, go to qctimes.com/gallery. 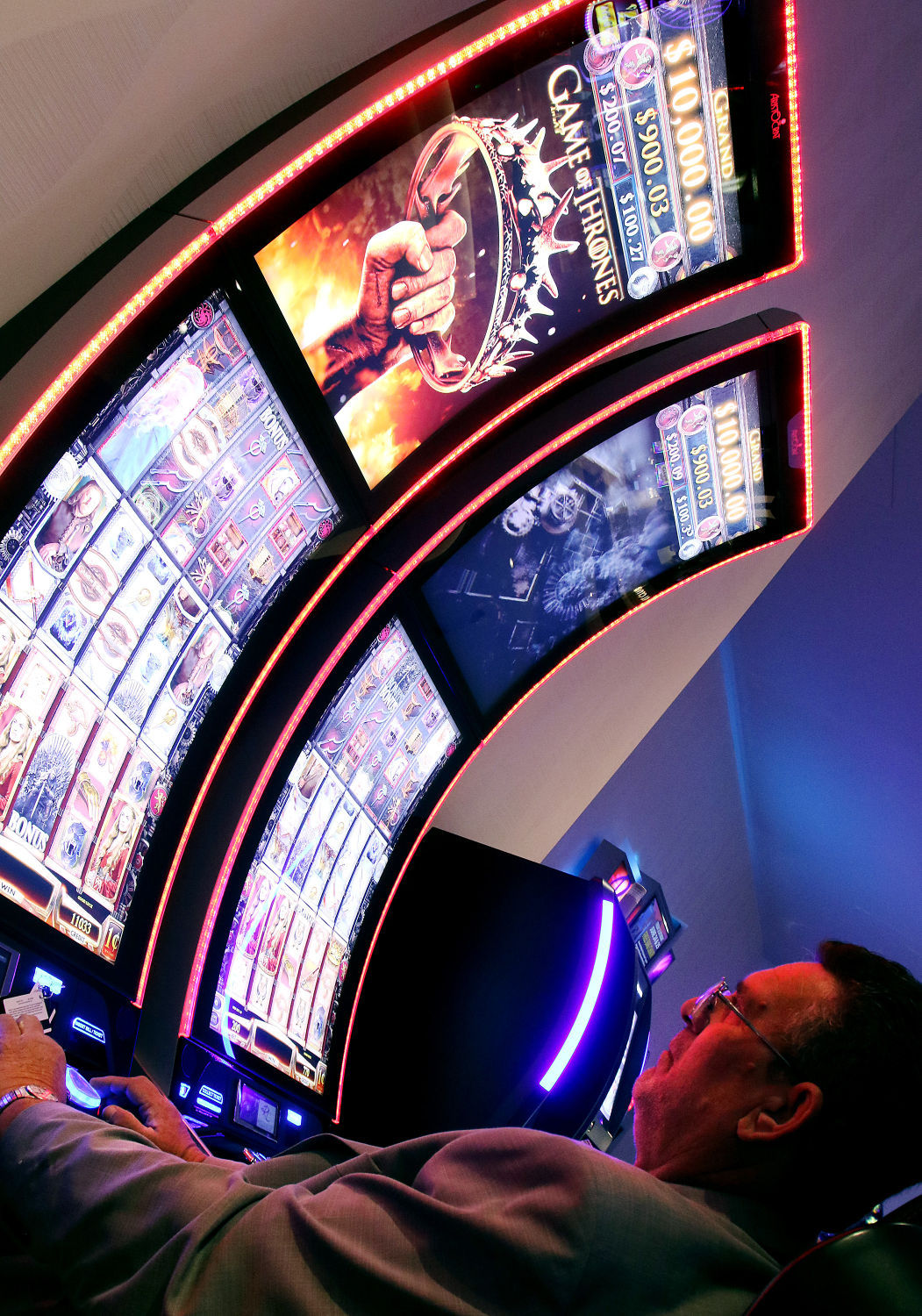 Steve Bradish of Nichols, Iowa plays the Game of Thrones video gaming machine during the grand opening Thursday of the Rhythm City Casino Resort in Davenport. 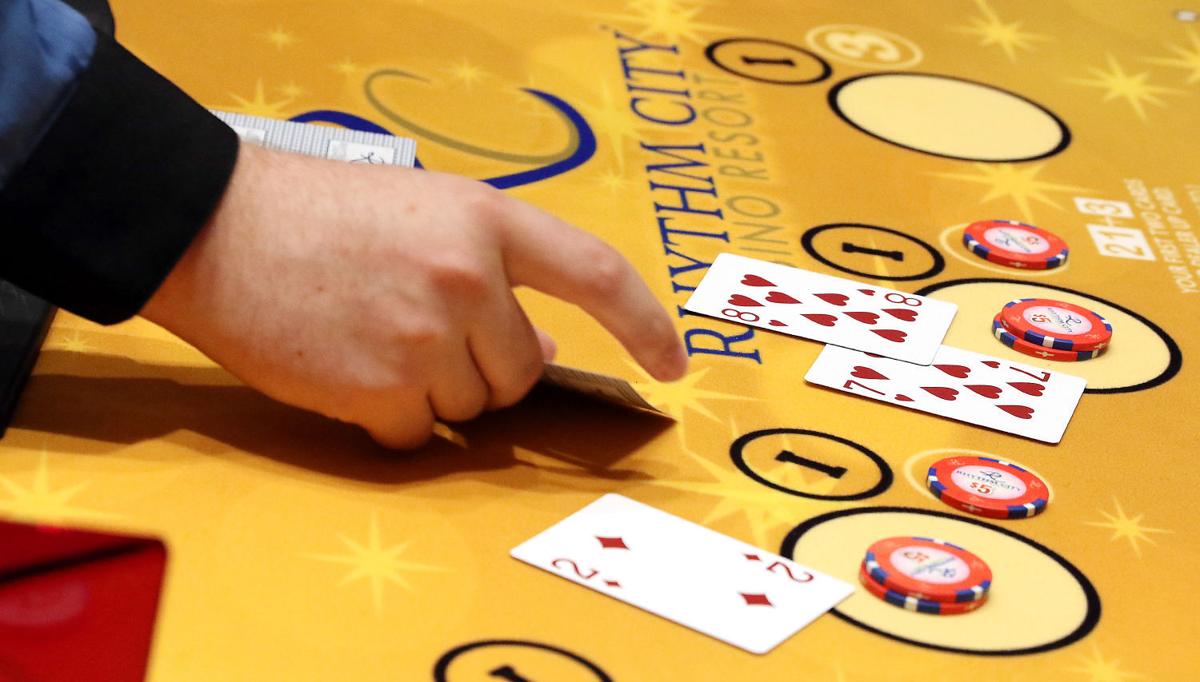 The blackjack tables were busy during the grand opening night of the new Rhythm City Casino Resort. 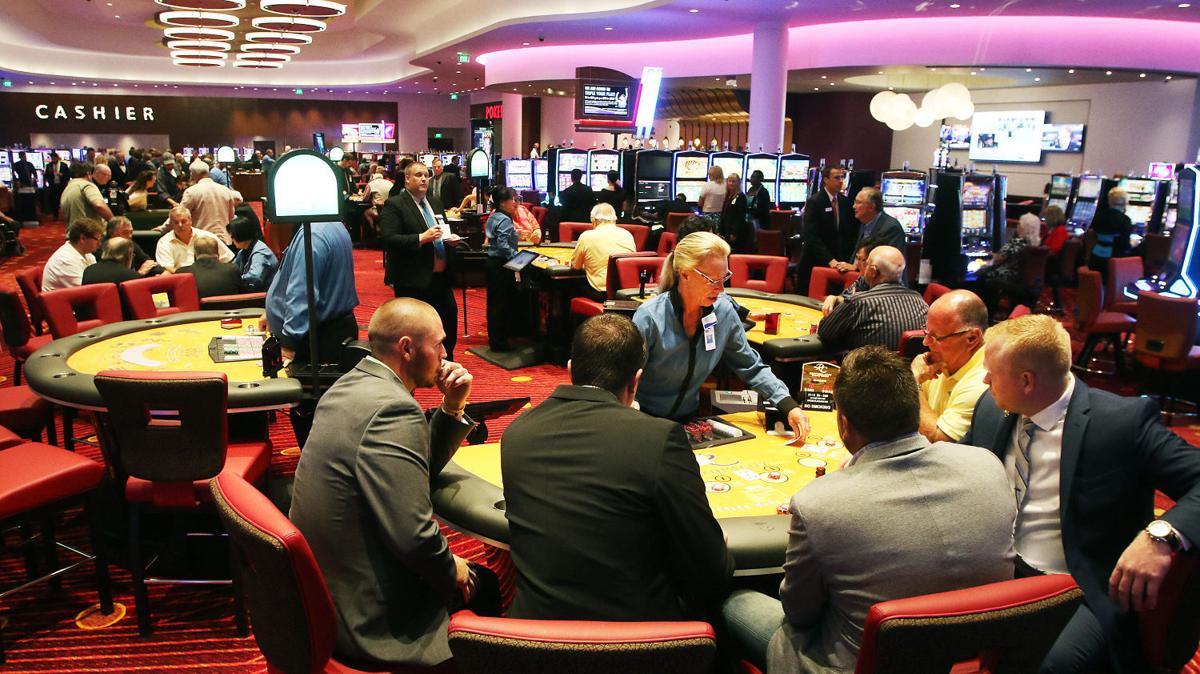 Among table games at the new Rhythm City Casino Resort are 13 blackjack tables. 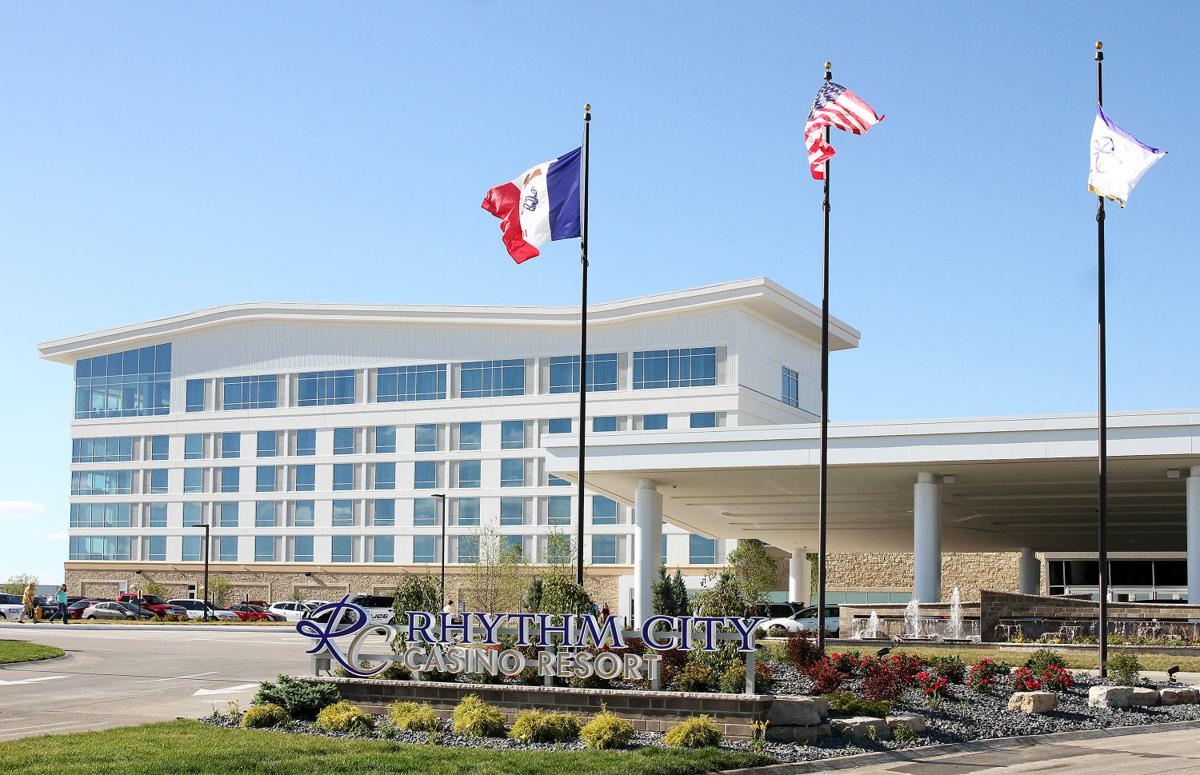 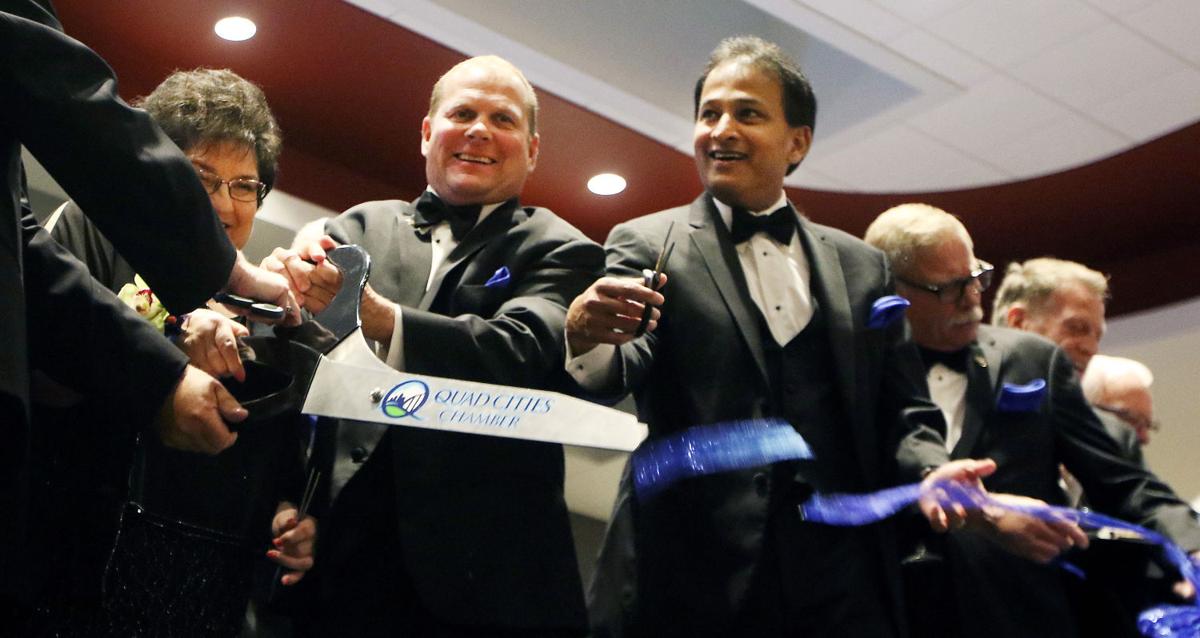 Rhythm City Casino Resort opened its next gaming chapter in Iowa on Thursday with a full house.

The event center of the new casino, hotel and entertainment complex was at full capacity as more than 1,000 invited guests and VIPs were on hand for the opening ceremony. The crowd — many of whom were dressed in tuxedos and sequined cocktail dresses — listened intently as guest speakers and casino officials spoke of the long road to Davenport's first land-based casino.

Dan Kehl, CEO of the parent company Elite Casino Resorts, said this marked the company's third new land-based casino opening in Iowa. "It seems it gets better every time."

He and others acknowledged his mother, Ruth Kehl, who sat on stage with nearly 30 company's board directors, for her pioneering role in Iowa's gaming industry.

In the glitzy, spacious new complex, two of its restaurants pay homage to the Kehls: Robert's Buffet and Ruthie's.

Rhythm City General Manager Mo Hyder told the guests that the industry has continued to evolve in Iowa and the new casino's opening "marks another milestone."

The $110 million complex, located at 7077 Elmore Ave., also includes a 106-room hotel and a gaming floor with 800 slot machines and 34 table games. The project — a $160 million investment began with the Kehls' purchase of the Rhythm City Casino for $50 million, he said.

"We have created an experience that is going to position us as the market leader," he said.

Frank Clark, president of the Regional Development Authority, or RDA, said the authority's new name reflects both the efforts of the new Regional Vision Q2030 as well as the Kehl family's business, which began in Dubuque. The RDA holds the casino's gaming license.

"The RDA has distributed approximately $60 million in this community," he said, adding "$60 million is a significant infusion in our economy and in the nonprofits. We want you to be even more profitable so we can give away more."

Davenport Mayor Frank Klipsch said the new casino will create "a synergistic energy" in the north Davenport area. "What the Kehls have done is open up another area that is going to blossom," he said.

After leading a countdown before the ceremonial ribbon was cut, emcee Gary Dolphin, "the Voice of the Hawkeyes," hollered "Touchdown Rhythm City Casino Resort! Touchdown!"

Inside the casino, guests gave the new slots and table games a first try. Connie Powell, of Rock Island, said the Rhythm City boat was her favorite casino before "and it still is."

In fact, her first dollar in a slot machine resulted in a $70 win. "Now I have money in my pocket."

Jane Lorenzen-Dietz, a dealer/supervisor, was waiting for the action to begin at her blackjack table. A longtime casino employee who has worked 16 years between Rhythm City and Jumer's Casino, she took a four-year break to work elsewhere. "This is my first opening," the Bettendorf woman said. "Everybody worked very hard. It's Vegas style now."

As the first guests gambled and toured the new complex, hundreds were outside lining up for the 6 p.m. public opening.

Sue Wren and Judy Fowler arrived at 4:30 p.m. and quickly found a spot on the curb as their husbands held their place in line in the hot sun. "We left Jumer's (Casino) to come over here," said Wren, of Shorewood, Illinois. "We had to see the new place."

Fowler, of Plainfield, Illinois, said they were hoping to win. "Because we didn't win any at Jumer's."

As she played the slots, Marie Christian, of Davenport acknowledged the jobs created by the new casino. "I love it. I think it's beautiful. It is something to do that is elegant. When you think of Iowa you don't think of elegant."

While hundreds of people were inside celebrating Rhythm City Casino Resort's grand opening, a few dozen union members were outside carrying pickets.

About 30 members of various Quad-City unions and trades stood at the entrance of the new $110 million complex with signs that read "Local Jobs For Local People."

Shaune Murray, a member of the International Union of Operating Engineers Local 150, said the group was protesting the use of out-of-town labor in the construction of the new casino.

"When we give you the money to invest in this casino, we want you to turn around and invest in local people,"  he said.

Murray, of Davenport, said the various union members have been handing out fliers at the Rhythm City Casino boat while the new casino was under construction. They contend the casino brought in half of its labor from non-union out-of-town contractors.

The casino was the fourth casino project for Fort Madison, Iowa-based Baxter Construction. The architect was Cunningham & Associates, Minneapolis.

Move marks beginning of end of an era

Riverboat gambling in the Quad-Cities has had its quarter century of fame.

Rhythm City Casino Resort is opening June 16. We have a first look.

Q-C riverboat gambling through the years

Chanda Washington, right, reacts to winning at the video slot machines Thursday night during the grand opening of the new Rhythm City Casino Resort. With her is Marie Christian; both are from Davenport. For more photos, go to qctimes.com/gallery.

Steve Bradish of Nichols, Iowa plays the Game of Thrones video gaming machine during the grand opening Thursday of the Rhythm City Casino Resort in Davenport.

The blackjack tables were busy during the grand opening night of the new Rhythm City Casino Resort.

Among table games at the new Rhythm City Casino Resort are 13 blackjack tables.