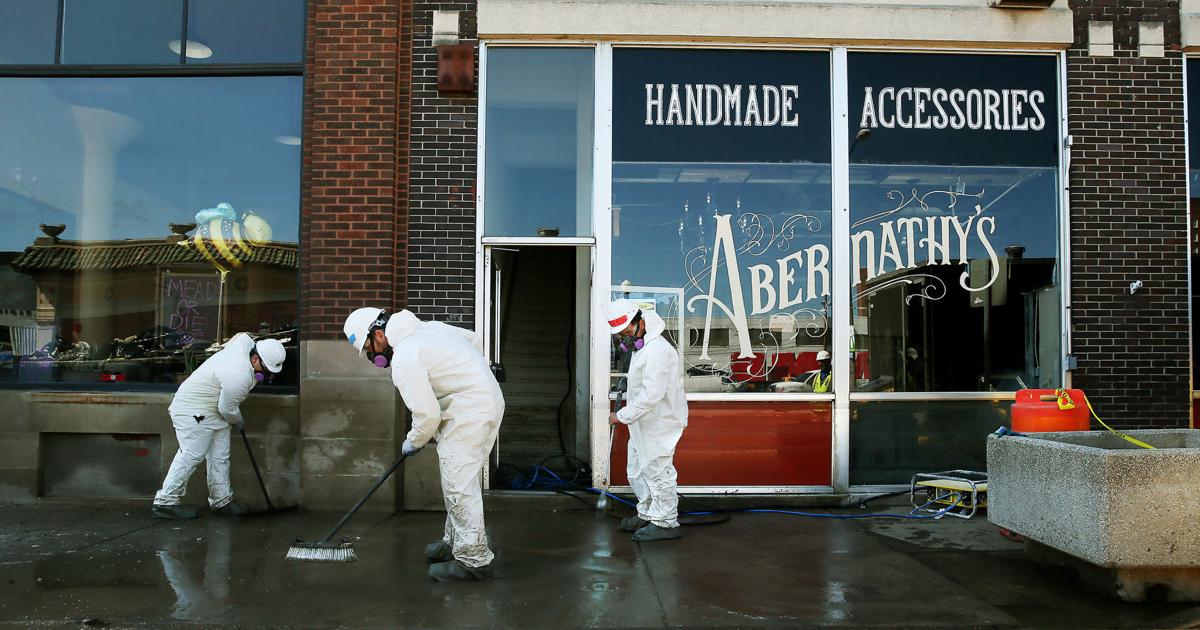 Workers from Werners Restoration of Colona clean flood damage outside and inside of Abernathy's in downtown Davenport on Monday. The area flooded on  April 30. 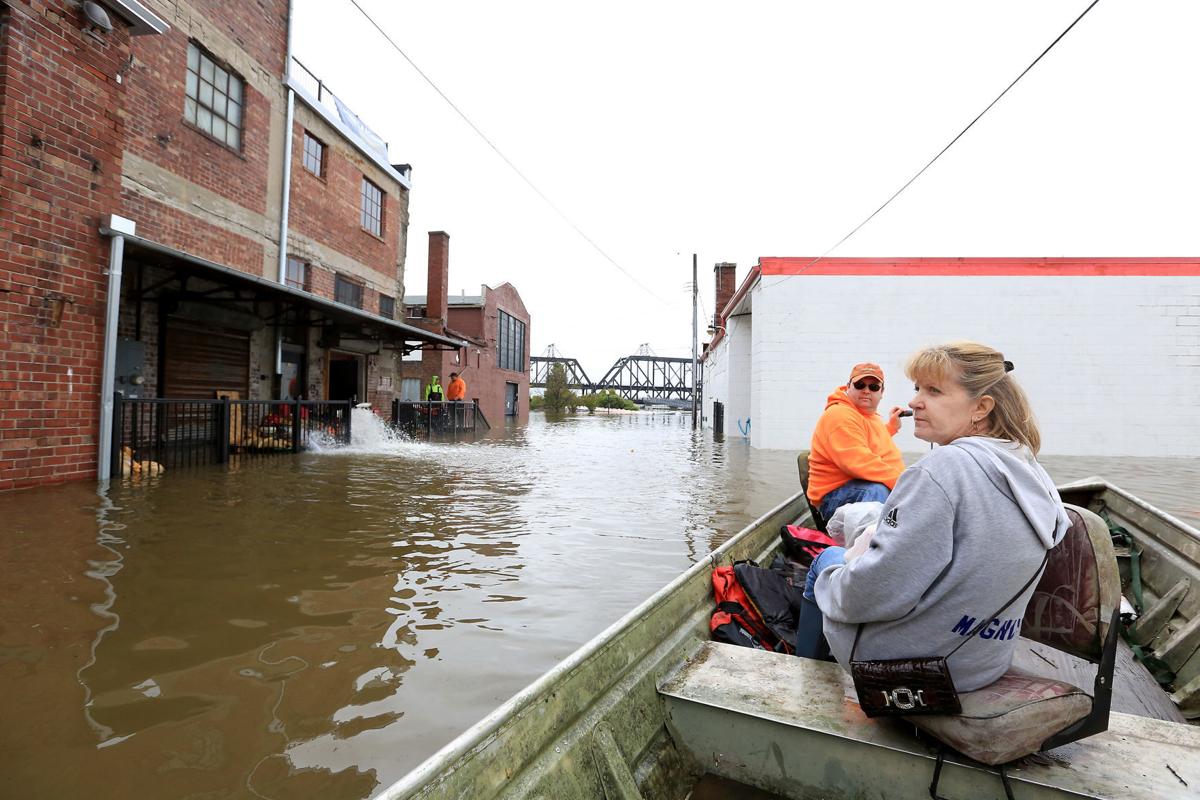 Ryan Lincoln, left maneuvers his jon boat through flood water while taking volunteer Donna Magnus to the back door of the Dress for Success location on E 2nd St. in downtown Davenport Thursday, May 2, 2019.

Vintage retailer Abernathy's and non-profit Dress for Success Quad-Cities will not return to their flood damaged downtown Davenport locations.

The owners of the two downtown staples recently announced they will not reopen in their neighboring stores, at 315 E. 2nd St. and 311 E. 2nd St. The building was severely damaged earlier this month as the Mississippi River flooded the downtown and reached a historic crest.

"It's really traumatic, is all I can really say," said Dress for Success founder and executive director Regina Haddock. "To walk in there and see everything torn out and the walls cut out. Everything that used to be something else — like our jewelry area or sorting area — is just not."

Dress for Success — an organization which dresses and prepares women for job interviews and careers — will operate out of a temporary location, at 4201 Elmore Ave., donated by Heart of America Group. The space was previously occupied by Beauty Brands, which closed last year.

Both stores are searching for permanent locations.

Haddock and Abernathy's co-owner Becca Nicke said the building is owned by the non-profit Bechtel Trust. They both thanked the organization for supporting them and offering affordable rent six years ago, when they were both starting out.

"The damage to the building outweighed having tenants there, so the trust made the decision to sell the building," Nicke said. "Right now, they're gutting the insides, taking out dry wall and trying to get it safe and habitable again."

Nicke said damage to her store is still being assessed, but she expects the estimate to be greater than $100,000.

"The Bechtel Trust really opened up the door for us to start a business," Nicke said. "Unfortunately, the first chapter of our business is coming to a close. While it's hard to swallow, we're really grateful for the opportunity we had in that spot. And we're ready for the next stage of our business."

Nicke said Abernathy's will hit the road and sell merchandise at upcoming events, including in Nashville, Kansas City and elsewhere. She's also hoping to host pop-up shops across the Quad-Cities to supplement income while searching for a new home for the store.

Despite having a temporary location to house Dress for Success, Haddock said there are still several "unknowns." Crews are tearing out drywall and flooring. Haddock said the non-profit mostly salvaged items in the front half of the store.

"The back half of the building is lower, so when the water came pouring in and the crest was going higher, we had a lot of standing water back there. Everything on the floor had to be pitched," she said. "We have a lot of stuff upstairs. We hope to find another space that's even half the size of this one that we can afford."

Haddock's biggest concern, though, is getting back to dressing women and helping them reach financial security, she said. While searching for a permanent home, Dress for Success will operate out of the store on Elmore Avenue, beginning May 21.

After being displaced by the flooding, Haddock said Dress for Success had to cancel its sale, which was scheduled for last week.

"We only have four sales per year, and we rely on that revenue. We have to raise all of our own money," she said. "So to lose revenue from even one sale is significant."

In order to recover from the losses, Dress for Success will host clothing drives at several Quad-City businesses from June 17-28. The locations will be announced next month, she said. The organization also is asking for monetary and clothing donations.

On June 17, Armored Gardens is hosting an event to raise money for Abernathy's and Crafted Q-C. Abernathy's owners also are posting events on their Facebook page, for those interested in supporting the business.

What downtown Davenport businesses are closed?

This story will be updated throughout the day.

2019 flood is highest, longest ever in the Quad-Cities

The Mississippi River rose to a record crest of 22.64 feet at 11:50 a.m. on Thursday, vaulting this year's flood to the highest and longest ev…

'We'll pull through this:' A dozen Davenport businesses reopen, others look to rebuild

As floodwater recedes and volunteers remove sandbags, a handful of downtown Davenport businesses have reopened. But many others continue to st…

Workers from Werners Restoration of Colona clean flood damage outside and inside of Abernathy's in downtown Davenport on Monday. The area flooded on  April 30.

Ryan Lincoln, left maneuvers his jon boat through flood water while taking volunteer Donna Magnus to the back door of the Dress for Success location on E 2nd St. in downtown Davenport Thursday, May 2, 2019.