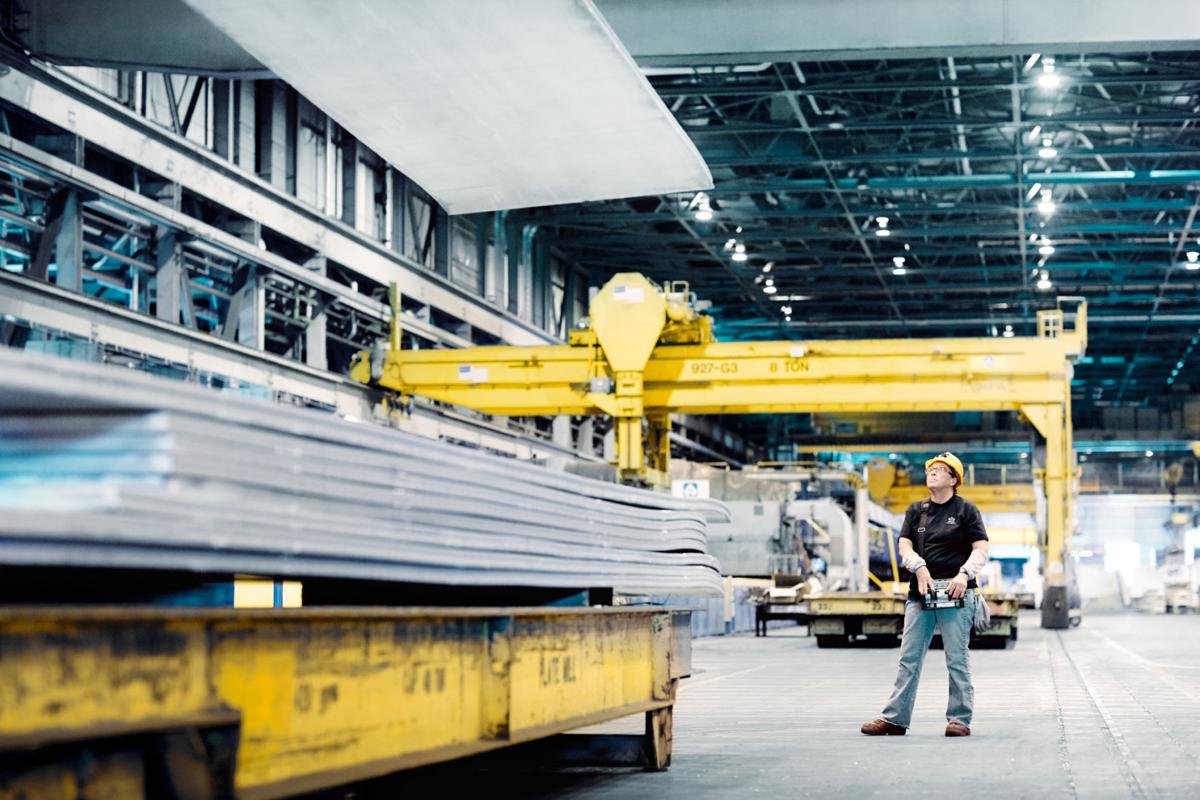 Work is performed at an Arconic factory.

Arconic is headed toward officially splitting into two separate companies on April 1 — no fooling.

That was one of several pieces of information doled out by company officials Monday morning during its earnings call on fourth-quarter and complete 2019 fiscal year financials.

The local plant features aluminum sheet and plate work for the aerospace, defense and automotive industries, including other local operations.

John Plant, chairman and CEO of Arconic, said Monday the “majority of the work has been complete” for the planned splitting of the company in 2020. Arconic Corp. will be spun off to include global rolled products while Howmet Aerospace will remain as the main company with aerospace operations.

No sign or name changes will happen at the Davenport Works facility, as it will be under the Arconic Corp. name. This comes just a few years after Arconic was formed after it split off parent company Alcoa.

Part of Monday's call was spent on Boeing. Arconic is a supplier for the 737 Max, which has been grounded for months after two fatal crashes in a span of five months. More details on Boeing are likely to emerge after an investor day in about one month.

Boeing and Federal Aviation Administration officials have recently said they don’t expect the 737 Max planes to get back into circulation until mid-2020.

“We have had many exchanges with Boeing during late December and every week throughout January, and hence have a reasonable feel for their current plans in 2020,” Plant said Monday. He declined to go into much detail on Boeing, deferring to Boeing's own earnings call this coming Wednesday.

When asked a follow-up question from an analyst, Plant said Arconic has had a $400 million revenue hit, plus or minus, for the Max.

He then discussed the overall situation, calling it “cloudy” and hoping for “greater certainty” in the coming weeks.

“It’s pretty confusing, and when we have that greater clarity, I tend to be in the optimistic camp,” Plant said.

He also said Arconic is looking to flex labor, including “looking at other means of trying to contain that labor, whether it’s by some maybe partially paid vacations, we’re looking at altering shift patterns. And also my expectation is that we will actually be reducing headcount as well.”

He noted the trouble of cutting workers and then having to bring back that same level of skill once production is back up to what it once was.

Plant said he is “trying to be as responsible and responsive as possible while protecting the future. I have to say personally I’m optimistic, even though we’re not assuming that in our guidance.”

Arconic Inc. Board signs off on split planned for April 1

Arconic Inc.’s leadership laid out its approach to 2020 while still wrestling with being a supplier to a grounded Boeing plane.

Arconic Corp. has secured a contract with General Motors to provide parts for some of its SUVs, including the Cadillac Escalade. That was one of the highlights from Tuesday's investor day about Arconic's operations once the company splits into two separate companies on April 1.

Similar to Deere & Co., Arconic is continuing its operations in the Quad-Cities after it was labeled essential critical infrastructure by …

As of Wednesday morning, Arconic Corporation shares have begun trading on the New York Stock Exchange.

Jerry Lyphout, national secretary and chief administrative officer at Modern Woodmen of America, has been appointed board chairman for Friends…

The Arconic Board of Directors this week declared a dividend of 2 cents per share on the outstanding Common Stock of the Company.

The United Steelworkers voted by a large majority Thursday to ratify a new three-year contract with Arconic, said Brad Greve, president of Loc…

People driving down Bettendorf's Grant Street during the past year might have noticed.

10 years after the Great Recession, the college class of 2009 opens up about life amid economic meltdown

They were the unlucky ones. A “lost generation,” as some economists have called them. “Generation Screwed,” others have said bitterly.

Work is performed at an Arconic factory.