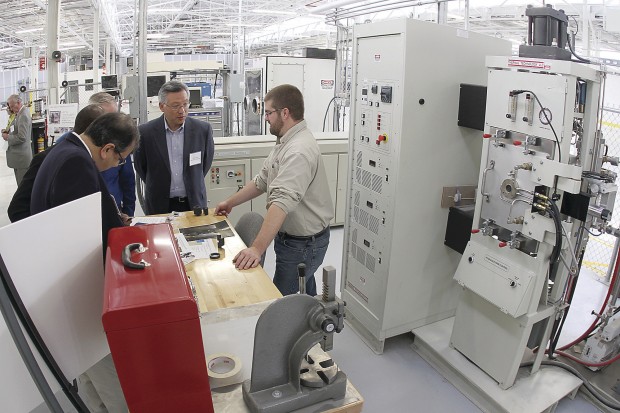 Project engineer Korbey Heisen explains how a piece of machinery works at the Quad-City Manufacturing Lab at the Rock Island Arsenal during a tour Tuesday. (Larry Fisher/QUAD-CTIY TIMES) 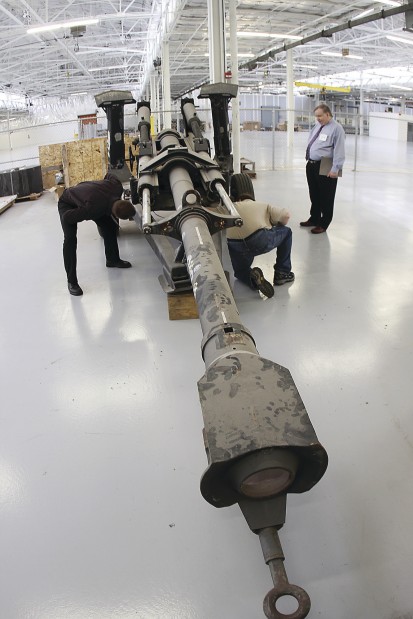 With a full house of guests Tuesday, the new Quad-City Manufacturing Lab displayed its capabilities in titanium manufacturing while touting its potential strength in adding to the Rock Island Arsenal’s workload.

About 70 people — from elected officials to business, community and education leaders — toured the facility in Building 299 on Arsenal Island. While the tour was part of the lab’s third Titanium Summit, it was the first open house since the lab opened a year ago and since titanium processing began.

“We’re a technology incubator. Small businesses can come here and use our technology and leverage us to get their products out,” said Dr. Jim Sears, the lab’s executive director.

The annual summit provided an opportunity to showcase how the lab — known as QCML for short — can assist other business partners interested in the manufacturing of titanium, lightweight composites and other advanced lightweight metals.

Located in a 3,000-square-foot space of a 96,000-square-foot warehouse, QCML will co-exist in the building with some of the partners. “We’ll become their research and development arm for the future,” Sears said, adding that several colleges and universities also are behind the lab operation.

“We will never manufacture (a product), but we will develop the process,” he said. “My goal is to surround myself with small businesses that I can support.”

Among the partners QCML will work with is Cee6Cubed, a Chicago-based startup that will become the next tenant in Building 299. Sears said some of the other partners include New Tech Ceramics of Des Moines and HF Webster, an engineering and professional services firm in Rapid City, S.D.

The building also houses an operation of the Joint Manufacturing & Technology Center and BAE, which produces armor made from composite materials.

According to Sam Kupresin, a member of QCML’s board, the lab’s goal is “to draw in business partners with Joint Manufacturing Technology Center (the arsenal’s factory) so there is a synergy between what the factory is doing and what is needed in the military with these new metals.”

He added that the lab, a not-for-profit corporation, puts the Quad-Cities and the Rock Island Arsenal at a competitive advantage as manufacturers, military and nonmilitary alike, turn to titanium, lightweight metals and composite materials. “Titanium has primarily been used in aviation but now it is migrating into other uses. There is no place you can stick a finger on in the nonaviation world that is a Center of Excellence in titanium (except QCML).”

Participating in the summit was Jim Derby, the chief executive officer of Cee6Cubed, who plans to establish a powder facility in Building 299. “We have other facilities for making full parts,” he said, adding that the parts all start out as a powder. The company produces materials for the mechanical seal, and oil and gas industries.

Locating alongside QCML, he said, “brings opportunity and exposure.”

“We plan to work with a group to train them here while we develop the processes,” Derby said.

Derby said the startup company will employ about 30 people on Arsenal Island and occupy about 2,400 square feet.

“We’ve had bad experiences trying to go down the road of small businesses … Small business has to be very reactive,” he said, adding that sometimes processes need to change in a week’s time. “We also will feed some powders to (QCML’s) needs,” Derby added.

Tim Frye, of the Rock Island Arsenal Development Group, said Building 299’s multimillion-dollar renovation was financed through the federal government’s Arsenal Support Program Initiative. In addition to updating the warehouse for future tenants, he said another section was demolished to include a common area for the tenants to share with conference and meeting rooms, locker rooms/restrooms, and a break area.

“The goal of all of this is to bring in partners with technology to provide new workload for JMTC,” Frye said, adding that they could be military-related or other commercial businesses. He pointed to the JMTC/BAE partnership as an example. “What JMTC brought was the equipment and the people. BAE brings the intellectual (knowledge) and orders.”

“As the military draws down in Southeast Asia, we need to bring in more workload for JMTC,” he added.

Comparing minimum wage to the cost of living in every state

Here's a look at how the minimum wage in your home state compares to the cost of living.

How to Boost Your Retirement When Social Security Covers Only 40%

You'll need income outside of Social Security to live comfortably as a senior. Here's how to get it.

Project engineer Korbey Heisen explains how a piece of machinery works at the Quad-City Manufacturing Lab at the Rock Island Arsenal during a tour Tuesday. (Larry Fisher/QUAD-CTIY TIMES)