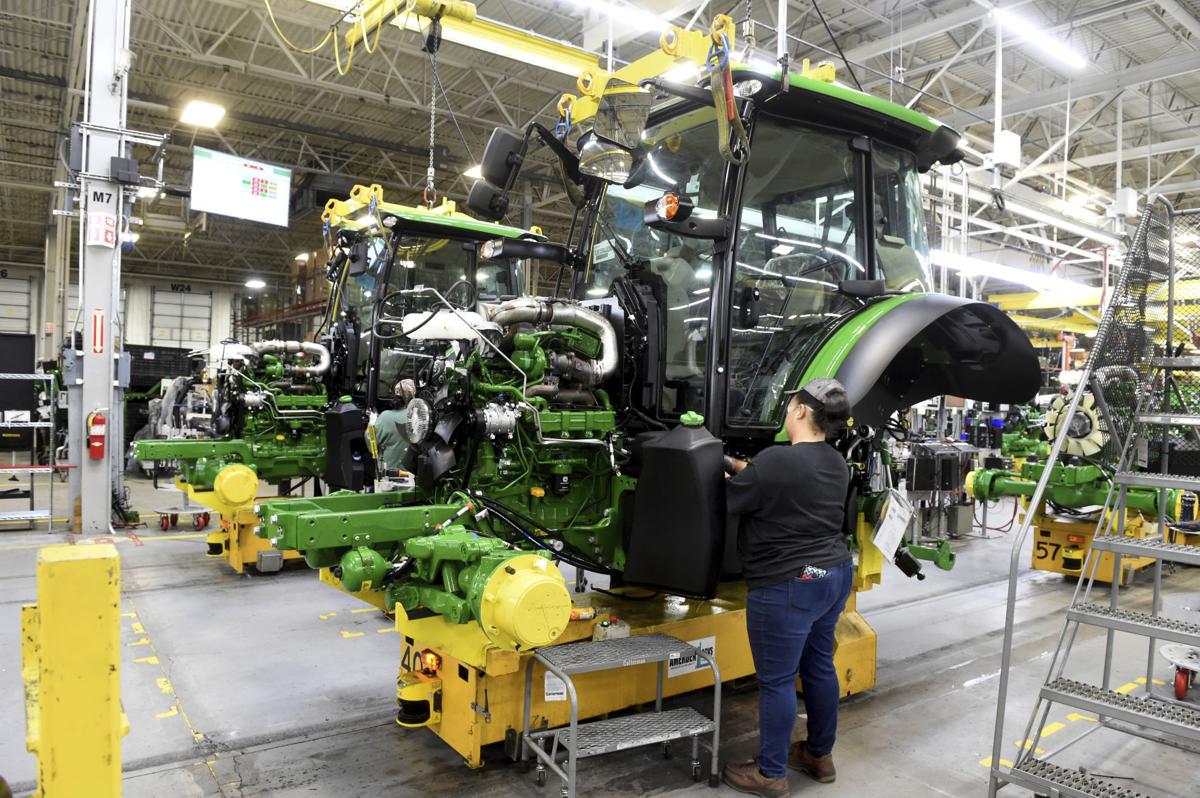 People work at the John Deere Commercial Products factory in Grovetown, Ga. Deere & Co. in this file photo. Because of supply chains, manufacturing companies such as Deere could have issues restocking. 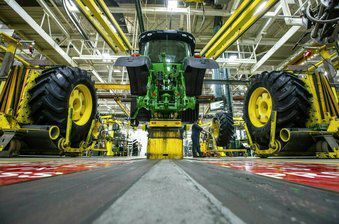 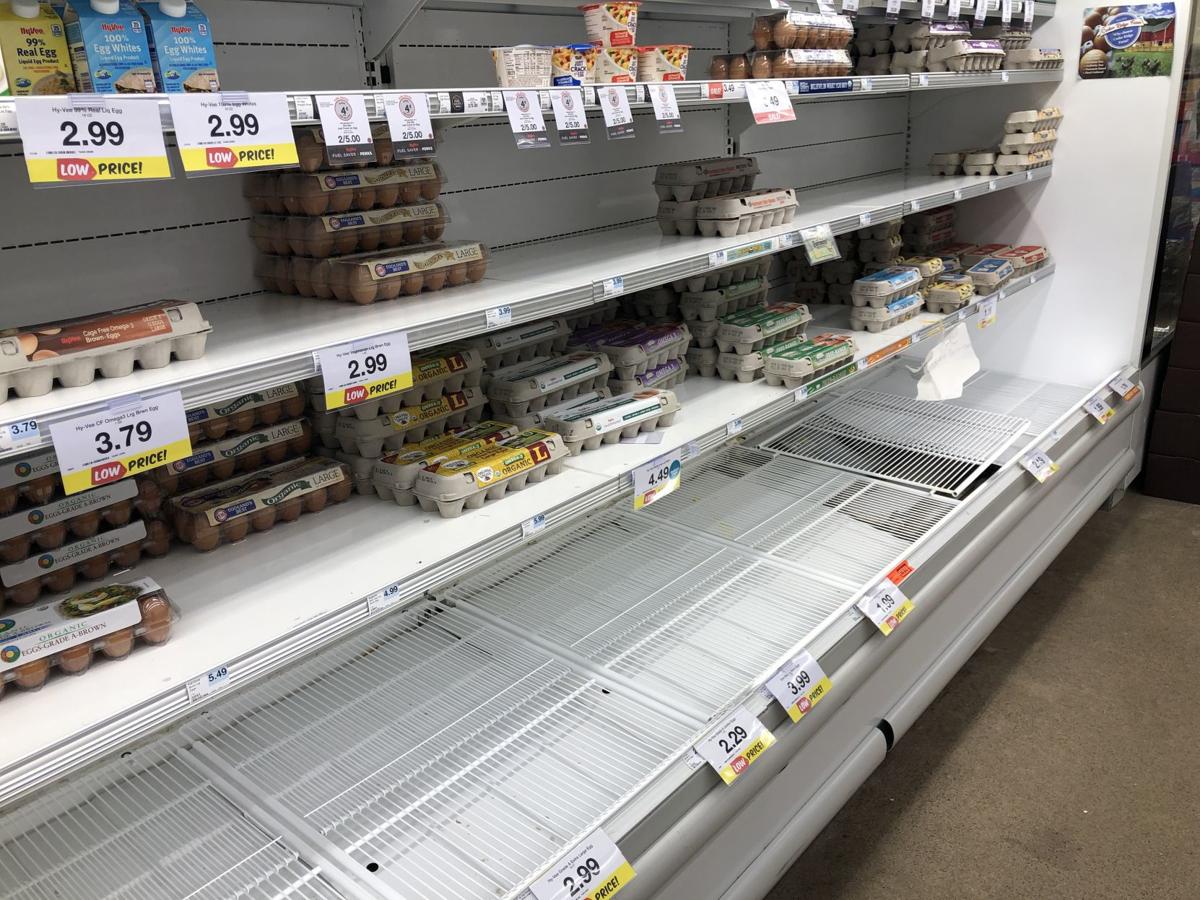 Empty shelves, like these on March 15 at a Hy-Vee store in Moline, were the result of panic buying because of the COVID-19 pandemic. The chain's CEO, Randy Edeker, said last week that supplies are getting back to normal.

Retail and grocery stores will likely restore their supply chains faster than manufacturers. Toilet paper and hand sanitizers, among others, that have seen a surge in demand will likely return to normal inventory levels at some point.

But the road for manufacturing, such as Deere & Company or Caterpillar, is going to be longer. One early sign of that is Deere recently pulling its own financial forecast for the current fiscal year.

COVID-19, or the new coronavirus, has disrupted daily life and the economy across the world but also closer to home in Illinois and Iowa, as the virus continues to spread and its death toll climbs across the world.

One silver lining for manufacturing, according to Honey Zimmerman, a supply chain management professor at Western Illinois University, is that China and the U.S. have been hit hardest by the new coronavirus at different times.

“I would imagine that there are a lot of plants in the United States that have burned up a lot of their inventory and are very, very worried because they don’t have access to their regular supply chains,” said Dave Swenson, an economist and Iowa State University professor.

“And that includes the European Union, which is right now in the midst of this crisis — Italy, Spain, Germany — those were also key manufacturers, and that could also be affecting manufacturing. We have the supply chain problem as a consequence of COVID-19, and that’s going to last for a while.”

Part of the strain on the supply chain has been the generational shift to just-in-time inventory ordering, usually only having enough on hand to get you through the next couple days. Companies going "leaner" on inventory is a way to cut costs, but "there's a lot of risk with extra inventory," Zimmerman said.

Less current inventory means companies are now scrambling. U.S.-based companies have in recent years shifted to an approach known as near-shoring, where sourcing is placed in Canada or Mexico, instead of waiting on something to travel from China on a sea vessel for several weeks.

Having to get something from North America reduces that lead time and transportation costs, Zimmerman said. Manufacturers are also grappling with the “Amazon effect,” or customers wanting something to be delivered in one or two days.

“That’s going to start to increase our inventories level again. It’s all about balance and you don’t want too much inventory because designs change, things change and it’s expensive,” she said. “But you want to be responsive, and the only way you’re responsive is if you have a little bit of inventory on hand.”

Swenson said the supply chain had “broken down” because parts can’t be had in five or 10 days.

“You can’t get your part and there is no alternative part because your systems have been engineered to only use that one part. And your own part could be as small as a specialized washer, bearing or a fitting in some sort of configuration, and that’s all it takes to shut something down,” he said.

“I saw a quote the other day that ‘it takes 2,500 separate parts to make an automobile and one missing one to not make one.’ So that’s what’s going on here.”

But trade is a two-way street; American suppliers and manufacturers for durable goods, electronics, appliances and machinery are being impacted with a decrease in demand.

When it comes to the supply chain for consumers, Zimmerman said the demand, and supply, for toilet paper and hand sanitizers, etc., will eventually level off.

“Once things die down and we’re able to go to the store on a regular basis, then we’re going to have stockpiles of inventory in our own home and we won’t be needing to buy as much in the stores as frequently,” she said. “We have to be careful, as producers, reacting to this huge spike of demand right now with people buying more. I don’t think there’s as much of an issue on the consumer side as the manufacturing side.”

In terms of Iowa industries shifting gears and producing needed items, Swenson said most industries in Iowa aren’t geared toward that.

“We don’t make medical equipment. We don’t make health care supplies. That isn’t our forte, that’s up in Minnesota,” he said, listing off companies that have been able to shift production for current COVID-19 needs.

Zimmerman said COVID-19 could lead to further automation with warehouse and transportation work, with those sectors not being able to recruit enough workers.

And while the supply chain disruption is being highlighted, in the background remains the lingering effect of the trade war between the United States and China that impacted farmers and Deere. The Phase One trade deal was signed earlier this year between the two countries, but China did not begin its promised purchase of American goods, such as farmers’ crops, because of coronavirus.

“There was a moment of hope, but there was absolutely no evidence that there had been any activity towards enacting phase one of the trade deal. The commodity market, the soybean market did absolutely not grow, it went down” after the deal was announced, Swenson said.

“It was great that we had it announced, but what really mattered was whether it was going to be implemented. Now China has a reason, perhaps, to drag its feet on the agreement by claiming poverty and/or claiming other priorities in the national economy.”

U.S. companies had begin looking to shift operations out of China, instead looking to invest in places like Vietnam and Indonesia, Zimmerman said.

"Those things haven't happened yet. They were in that process so I think we are in a little bit of a bind right now because of that. I think it's going to cause companies like John Deere and Caterpillar to really step back and think how do we want to do this moving forward," she said.

"... I don't think that they were able to transition enough away from China and bring things back to the United States, or even North America. I think it's going to be a slower transition than they had hoped because of this disruption."

Bringing production and manufacturing jobs back to the United States has been hypothesized by some, either during the trade war or with the current coronavirus outbreak.

“I don’t know where that comes from. I think that’s wishful thinking,” Swenson said. “I think that dispersion of manufacturing is a fact of life that’s going to continue to be dispersed, and as a matter of fact as more countries develop over time economically, it’s going to be even more dispersed.”

He continued, “I don’t buy a lot of the rhetoric that if X happens, we’re going to have more domestic manufacturing. I just don’t buy it. I just don’t think it’s likely.”

A worker at John Deere Dubuque Works has a probable case of COVID-19. That worker has not been to work since last week, Deere & Co. said i…

Deere & Company is temporarily suspending operations at its Dubuque Works facility after Deere was notified of a confirmed case of COVID-19 in an employee of the Dubuque facility. This confirmed case is in addition to a probable case of the new coronavirus announced late last week.

Deere & Co. is not making face shields yet, despite Iowa Governor Reynolds' claims

Deere & Co. is not producing face shields in plants across Iowa, as Iowa Gov. Kim Reynolds asserted in a press conference Monday.

WATERLOO — A John Deere Foundry Operation worker, who had not been to work since March 20, was confirmed to have COVID-19 on Wednesday.

John Deere Cylinder Works in Moline has temporarily halted production after confirmation that an employee there has COVID-19.

Deere: Waterloo contractor tested positive for COVID-19; hadn't been to work since March 31

WATERLOO — A contractor at John Deere Drivetrain Operations, who has been on self-quarantine since March 31, tested positive for COVID-19 Tuesday.

Unemployment claims continue to rise in Illinois and Iowa as the United States continues to grapple with COVID-19, and mitigation efforts to c…

A worker at John Deere Harvester Works in East Moline has tested positive for COVID-19.

Deere to pause production in Davenport and Dubuque; more layoffs in Dubuque

Deere & Co. is pausing production at its Davenport and Dubuque facilities May 11, and implementing further layoffs in Dubuque.

Economist: Many economists view full economic recovery by end of 2021

What a difference six months makes.

Deere & Co. projects earnings off $1B

COVID-19 has led Deere & Co. to project $1 billion less in income for its current fiscal year.

Quad-Cities adds 3,000 jobs in May, but it's still feeling the effect of the pandemic.

The Quad-Cities local economy added about 3,000 jobs between April and May.

Deere laying off 82 in Davenport, 35 in Waterloo in early August

Deere & Co. is laying off more Iowa workers in Davenport and Waterloo.

Grassley: Iowa will qualify for individual help from FEMA

DES MOINES — Waiters, waitresses, bartenders, hotel employees and other workers in accommodation and food services industries who were idled b…

'They're ready to get back to trading': Quad-City area farmers have received more than $121 million in aid during trade wars

More than $121 million has been funneled to Quad-City area farmers by the federal government since the U.S. trade wars began two years ago.

Market uncertainty: Companies could see some relief after U.S.-China phase one agreement, but plenty of questions remain

Two years into an international trade war, the manufacturing segment of the U.S. economy remains uncertain.

As an international trade war drags on and farmers continue to grapple with roller-coaster weather, harvest season has become a "race against time."

People work at the John Deere Commercial Products factory in Grovetown, Ga. Deere & Co. in this file photo. Because of supply chains, manufacturing companies such as Deere could have issues restocking.

Empty shelves, like these on March 15 at a Hy-Vee store in Moline, were the result of panic buying because of the COVID-19 pandemic. The chain's CEO, Randy Edeker, said last week that supplies are getting back to normal.