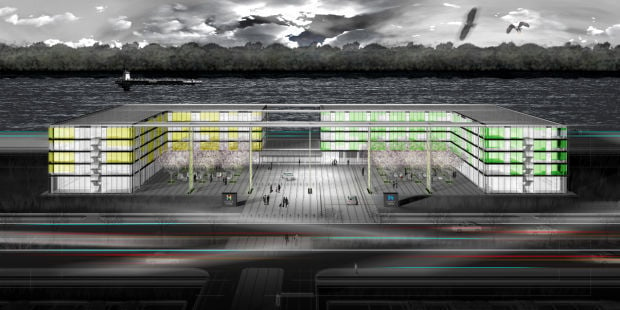 A Hyatt House and Hyatt Place, designed by Helmut Jahn, will be the centerpiece of Fountainhead Quad-Cities. The new development will be built on the former Case New Holland site in East Moline. 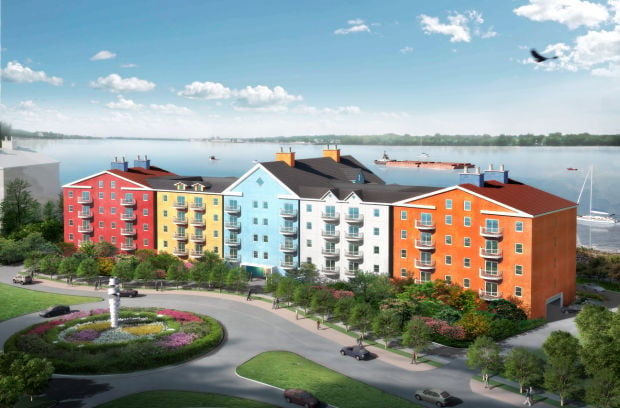 The first apartment building planned for Fountainhead Quad-Cities, development on the East Moline riverfront, will have the look of a Norwegian fishing village. The first building will be 88 units. A total of 300 units are planned in the first phase. 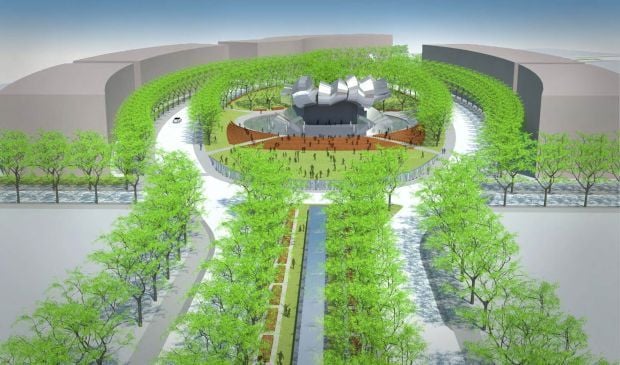 A 3.5-acre park with a festival stage will be in the center of Fountainhead Quad-Cities riverfront development in East Moline. Developers are comparing the park to Chicago's Millennium Park.

J. Paul Beitler, the Chicago developer hired by the property's owner River Eagle Investments LLC, said that in the past week the project has received signed agreements from Hyatt Hotels as well as a signed agreement for a construction loan from Bankers Trust of Des Moines, the largest privately owned bank in Iowa.

"This gives us the exclusive franchise for Hyatt House and Hyatt Place," he said of the 240-room hotels that will anchor the redevelopment. The loan agreement, he said it "will provide us with our equity and funds necessary to start our development after the first of the year."

Fountainhead Quad-Cities is a project of River Eagle Investments, an ownership group that includes state Sen. Mike Jacobs, D-East Moline, and Dan Murphy, retired and former owner of Precision Pipeline LLC. Phase One of the redevelopment includes a 128-room Hyatt Place and connecting 112-room Hyatt House, as well as an 88-unit apartment building.

River Eagle purchased the sprawling 132 acres of prime riverfront real estate for $1.5 million in December 2010 from Fiat, CNH's parent company. The property had been appraised at $4.5 million. CNH closed the 77-year-old combine plant in August 2004.

Since the redevelopment project was announced, "There were a lot of moving parts — zoning, infrastructure, an agreement with the city, negotiations with Hyatt, designing all these buildings ..., " Beitler said. "We are literally building a city."

East Moline Mayor John Thodos, who said the city has "waited a long time" for the project, said he is pleased the start of construction appears to be near.

"I loved it when we were building big red combines there," he said. "I know of a lot of people that raised kids, paid for college and paid for homes based on the big red combine company. For all the effort it has taken to get into this, East Moline — and all the Quad-Cities, for that matter — will be proud."

Thodos added that the delay actually may have been a mixed blessing.

"With all the other construction, Western Illinois University and others, the trades have been at full capacity," he said. "Now there is going to be more labor to do our project, and it's going to be a huge project."

In fact, Beitler said when construction begins "this will be the current single-largest mixed-use project in all the state."

Phase One is estimated at $150 million, while a second phase of $200 milllion is planned in the long-term.

The first phase will include the two Hyatt hotels and an 88-unit apartment building, which is one of three planned for the site. A Class A office building and boutique retail stores also are planned.

Sitting right on the riverfront, he said, the apartments will have a "Norwegian fishing village feel." Initially, development will span 40 acres of the site.

In the center of the initial development, will be a 3½-acre public park designed by world-renowned landscape architect Tom Oslund from Minneapolis.

Beitler said $10.2 million in funding provided by the city of East Moline is financing the streets, infrastructure and the park, which will include a festival pavilion.

According to Thodos, the city structured the agreement with River Eagle so construction must begin before the city's commitment kicks in. In addition, he said, "They have to have their loan commitments and Hyatt commitments, which they do, before we start building out."

"He's an East Moline kid who is one of East Moline's success stories," he said. "He built a business and did well for himself, and now he's come back to do good for his community."

The general contractor for the project is Russell Construction, Davenport. McClure Engineering, East Moline, is the project engineer.

Beitler said Phase 2 will develop "the balance of the property." Those plans call for another hotel, riverfront condominiums, an indoor sports arena and a grocery store.

Construction of the Hyatt hotels is expected to take 15 months, with the hotels and the apartments opening in spring 2016.

The project has united several world-class architects, including Helmut Jahn, Stanley Tigerman, Margaret McCurry and James DeStefano, the project's master planner. Under Beitler's vision, the project has evolved into "an architectural park of the greatest architects in the world."

Thodos, who is eager to finally get a hotel in East Moline, credited Beitler's influence and contacts for taking the project to a higher level.

"He has said on many occasions that his job is to be 'the dreamer,'" Thodos said, adding that East Moline would not have drawn an architect the stature of Helmut Jahn without him.

"But I get excited when I'm putting a shovel in the ground," he said.

Save money on holiday shopping with these simple tips

Save money on holiday shopping with these simple tips

A Hyatt House and Hyatt Place, designed by Helmut Jahn, will be the centerpiece of Fountainhead Quad-Cities. The new development will be built on the former Case New Holland site in East Moline.

The first apartment building planned for Fountainhead Quad-Cities, development on the East Moline riverfront, will have the look of a Norwegian fishing village. The first building will be 88 units. A total of 300 units are planned in the first phase.

A 3.5-acre park with a festival stage will be in the center of Fountainhead Quad-Cities riverfront development in East Moline. Developers are comparing the park to Chicago's Millennium Park.