Fortress Bank will open its new Davenport banking center Tuesday at the intersection of East 53rd Street and Interstate 74. The Peoria-based bank renovated a former frame shop into its new branch. 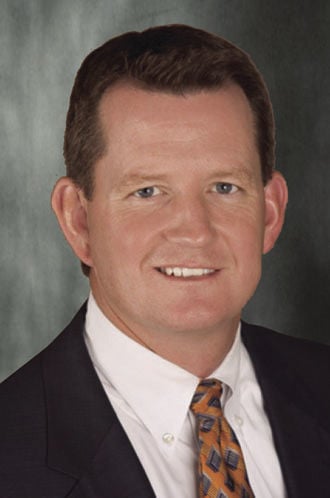 A 114-year-old Illinois community bank is expanding to Davenport with a new banking center at one of the area's most visible intersections — 53rd Street and Interstate 74.

Fortress Bank will open its doors Tuesday at the remodeled facility at 3260 E. 53rd St. As part of the expansion, the bank has relocated its original Quad-City office — a loan production office at 909 Middle Road in Bettendorf, to the new center.

The 8,000-square-foot building, built in 1999 as a Gateway Computer store, most recently was the Mimzi Art & Frame shop.

Fortress Bank, which entered the market under its previous name of First State Bank, now will be able to offer a complete array of banking products and services to the Quad-City market.

"While Fortress Bank may be new to most people, we are not new to the Quad-Cities," said Lee Garlach, the bank's chairman and CEO. "We have a number of local investors in our bank and have made more than $50 million in loans to Quad-City area businesses and consumers."

The bank changed its name to Fortress Bank on Dec. 1. Its parent company is First State Bancorp. Inc., of which Garlach is the president, principal shareholder and key organizer. Garlach, of Sherrard, is an entrepreneur with considerable experience in the merger, acquisition and operations of small businesses.

Locally, he has been joined by veteran bankers John "Omar" Bradley, Keith Worner, Sue Lerschen-Cassatt and Kristal Koberg Schaefer to lead the bank’s commercial and mortgage lending activities in the area.

"Our ability to utilize locally made products and local tradespeople makes us proud of this investment in the Quad-Cities," Garlach added.

Fortress Bank traces its roots to in 1904 in the west-central Illinois town of Burnside, where it served agricultural-based communities. Today, the bank has assets in excess $400 million and is a privately held organization serving customers across western and central Illinois, eastern Iowa, and the Midwest.

'It's kind of a jungle': Quad-Cities housing market 'bananas'

Homes in the Quad-Cities are selling within hours of listings, without inspections, and above asking price.

Could a Trader Joe's come to the Quad-Cities? Bettendorf resident hopes social media campaign pays off

The unnamed company is looking away from the Midwest to other regions of the U.S.

'It's kind of a jungle': Quad-Cities housing market 'bananas'

Homes in the Quad-Cities are selling within hours of listings, without inspections, and above asking price.

Economist: U.S., Quad-Cities economies roaring back to life. But hiring is still a concern.

The Quad-Cities economy is expected to grow by about 6% in 2021, less than the nation as a whole, due to difficulties meeting labor supply from a lack of available, skilled workforce.

Farmers needing some construction work done should be willing to open their wallets as well their calendars.

Fortress Bank will open its new Davenport banking center Tuesday at the intersection of East 53rd Street and Interstate 74. The Peoria-based bank renovated a former frame shop into its new branch.