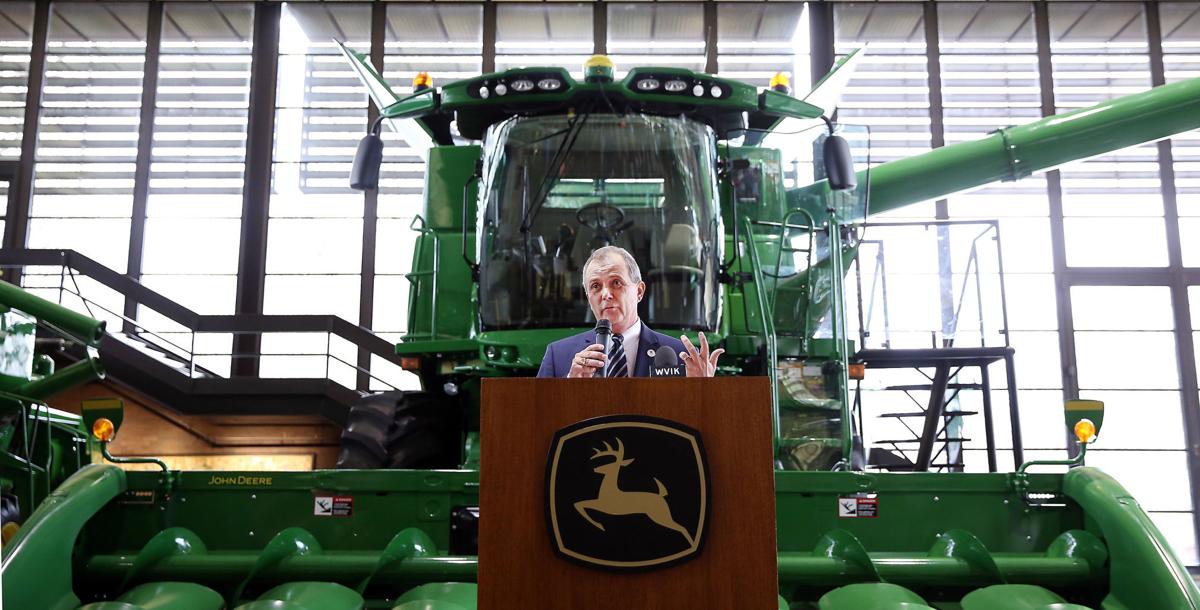 John Deere Classic Tournament Director Clair Peterson talks about the past success of Birdies for Charity on Monday during the annual kickoff event at the John Deere World Headquarters in Moline. 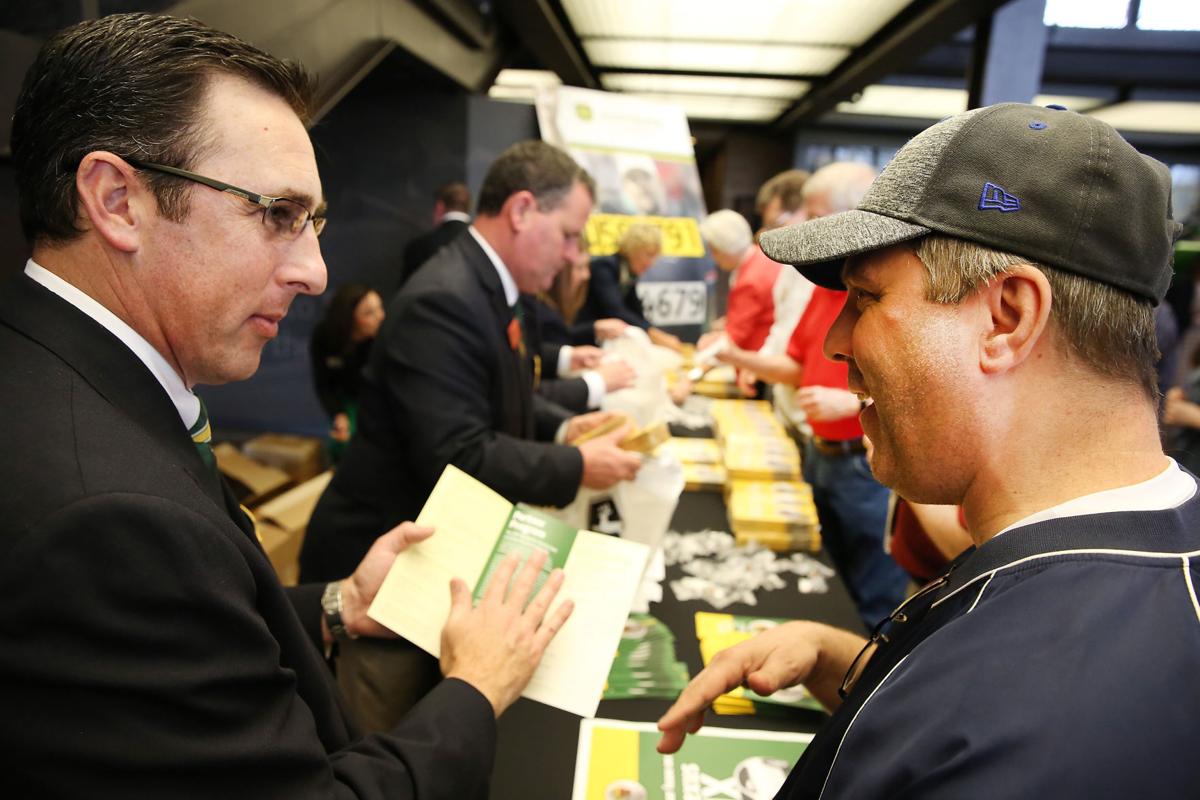 Todd Hajduk, left, a member of the John Deere Classic board, speaks with Tim Oloffson of Another Child Foundation in Princeton, Illinois, about Birdies for Charity fundraising information. 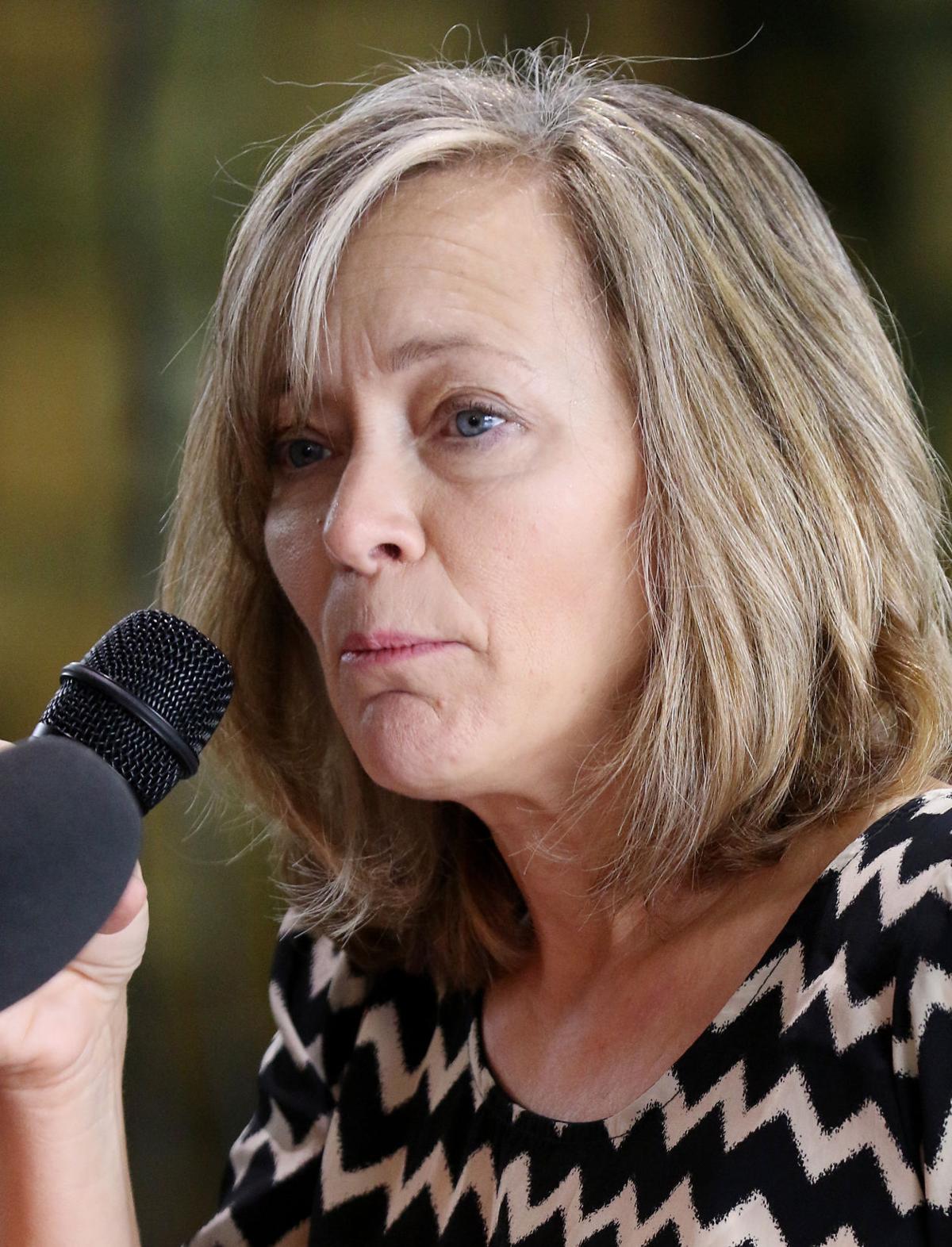 Like a rite of spring, the John Deere Classic's Birdies for Charity program kicked off Monday and is flying high for 2017.

"We are always proud and appreciative of the generous nature of this community, making the John Deere Classic one of the top charity performers on the entire PGA Tour," JDC tournament director Clair Peterson told an audience of tournament board members, media and participating charities.

The event also served as the informational pick-up event for an estimated 500 charities whose fundraising efforts support the annual Birdies program.

The 2016 total helped the JDC rank among the top four tournaments in charitable donations among the PGA Tour's 47 events, Peterson said. To date, the tournament has raised more than $81.3 million for charity since the PGA Tour's presence began in the Quad-Cities began in 1971.

The new year also begins on the heels of other accolades for the tournament, including earning the PGA's Tournament of the Year for 2016 title and its fifth designation as the Most Engaged Community by the Tour.

"That's a testament to what has been going on here since 1971," Peterson said.

In addition, John Deere now ranks as the third-longest serving title sponsor on the PGA — behind AT&T and Honda, he said. In 2015, Deere agreed to extend its title sponsorship until 2023.

Through Birdies, individual charities gather pledges based on the number of tournament birdies scored or lump sum donations. John Deere, the tournament's title sponsor, covers the program's administrative costs so that 100 percent of the money pledged and collected goes directly to the participating organizations. Last year's JDC contestants recorded 1,982 birdies during tournament play and the Wednesday pro-am.

The tournament also now adds a bonus check of up to 10 percent for each charity through the tournament's profits and other donations. For the past four years, charities have received a 10 percent bonus as the John Deere Foundation has added $325,000 to the bonus pool with a matching challenge grant program.

Peterson announced that Lexus of the Quad-Cities has again agreed to provide a free two-year lease of a 2017 Lexus NX to the donor who correctly guesses the exact number of birdies during the JDC, which returns to is regular schedule. It will be July 10-16 at TPC Deere Run in Silvis. The Davenport car dealership also will furnish courtesy cars for the golfers during tournament week.

Jackson said this year the Birdies staff has rolled out a series of webinars for the charities to learn how to make their own fundraising efforts more successful. She estimated about 500 charities will get involved this year and collect about 20,000 pledges from now until the tournament. The total raised will be announced in late October.

As charities picked up their fundraising materials, the tournament's executive board and Birdies staff were on hand to assist.

"One of the great things about this board is how every board member is passionate about the charity side," said Pat Shouse, the 2017 JDC tournament chairwoman. Reflecting on the 491 organizations that benefited last year by Birdies, she said "Just think how many lives that is."

Jenny Garlach, executive director of the Boys & Girls Club of the Mississippi Valley, was among the charities picking up this year's fundraising information. "Birdies is a tremendous help, especially with those bonus checks," she said, adding that is extra money "you don't budget for that."

The bonuses have helped the organization cover unexpected costs, including a 60-percent increase in its teenage membership.

She also applauded the extra the Club's kids get from the tournament, including a clinic with some of the pros and tickets to attend the JDC itself with their families. "We take 75 to 100 kids out there," she said.

Scott Tunnicliff, director of Hilltop Campus Village, a Main Street Iowa program in Davenport, also was picking up his fundraising materials for the new year. "We included Birdies for Charity as an element of our operating budget every year," he said. He planned to return to the office and "tell my board to get the message out."

For more information on Birdies for Charity, visit birdiesforcharity.com.

The golf tournament was in a perilous spot.

The John Deere Classic had plenty of obstacles to overcome this year.

The 2016 John Deere Classic produced more winners Monday as JDC officials announced that a record $10.5 million was raised this year for 491 c…

John Deere Classic Tournament Director Clair Peterson talks about the past success of Birdies for Charity on Monday during the annual kickoff event at the John Deere World Headquarters in Moline.

Todd Hajduk, left, a member of the John Deere Classic board, speaks with Tim Oloffson of Another Child Foundation in Princeton, Illinois, about Birdies for Charity fundraising information.