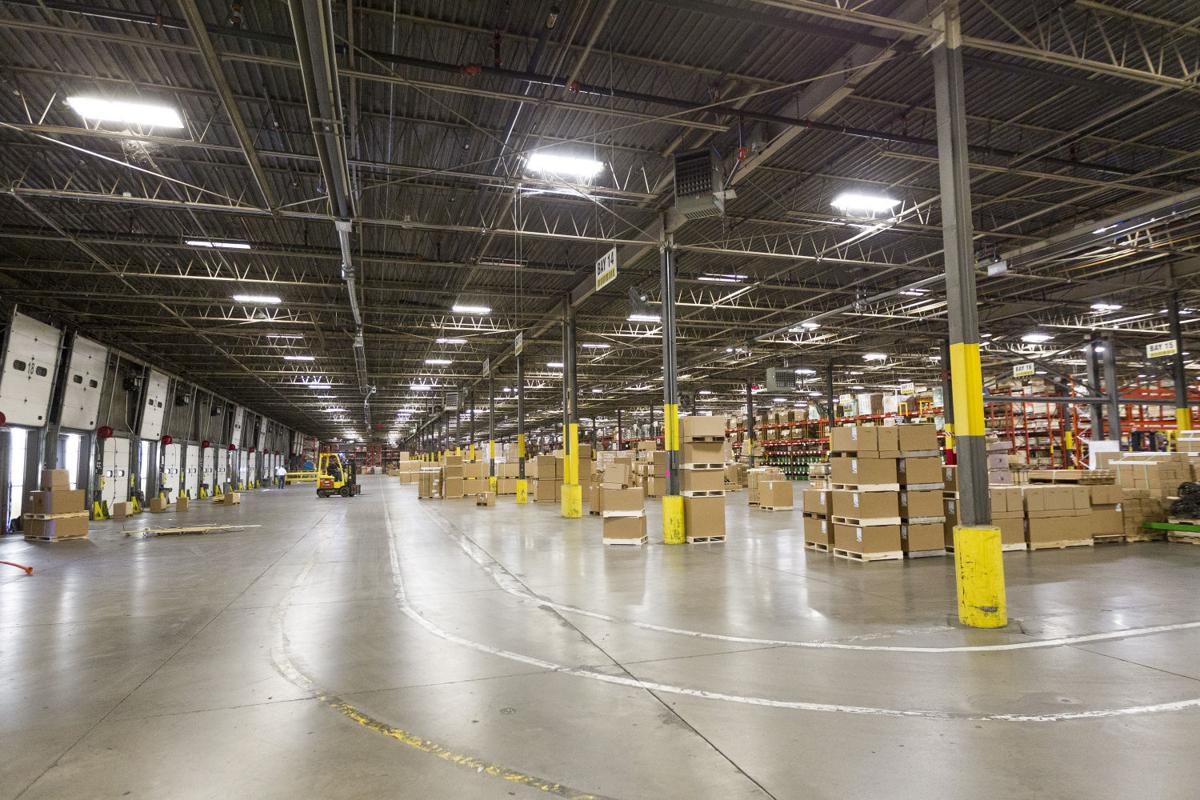 Box parts are ready to be moved and loaded onto a truck at one of the 99 dock doors, left, at John Deere Parts Distribution Center in Milan. 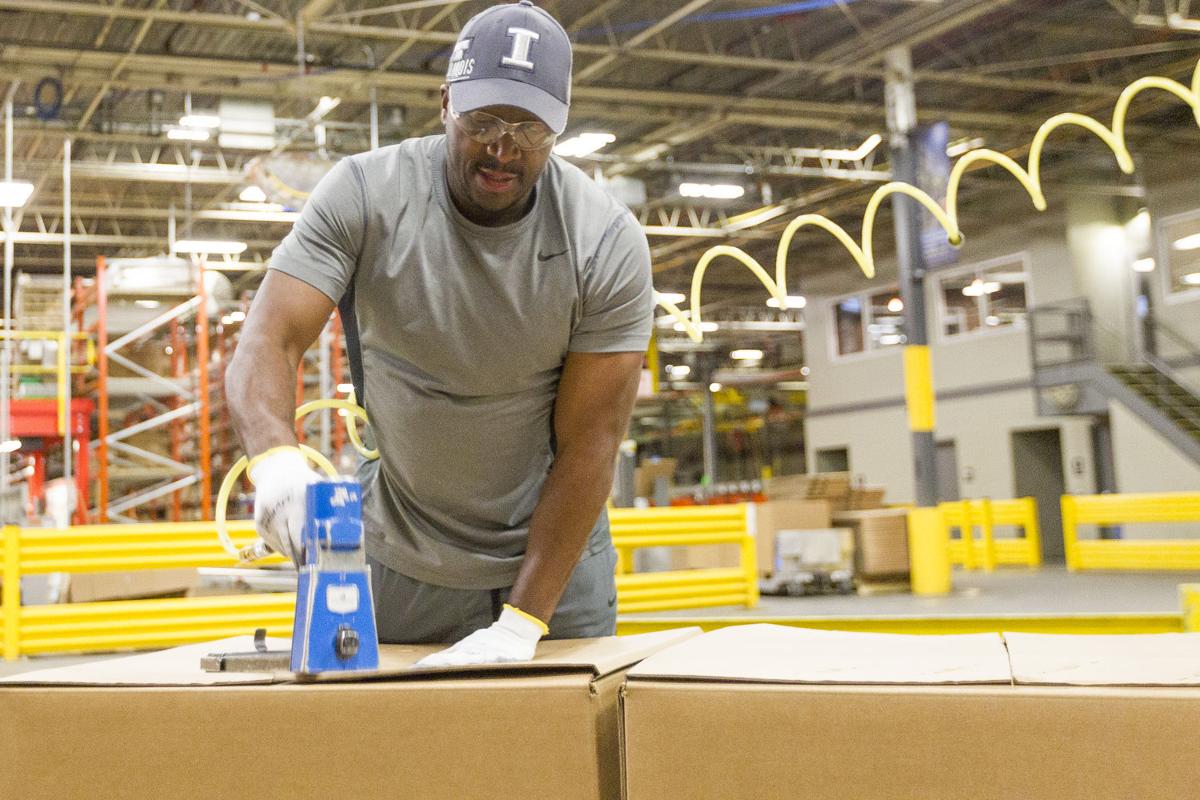 Johnnie Lathan, a D148 picker at John Deere North American Parts Distribution Center, staples up boxes of parts to be shipped out from the Milan facility. 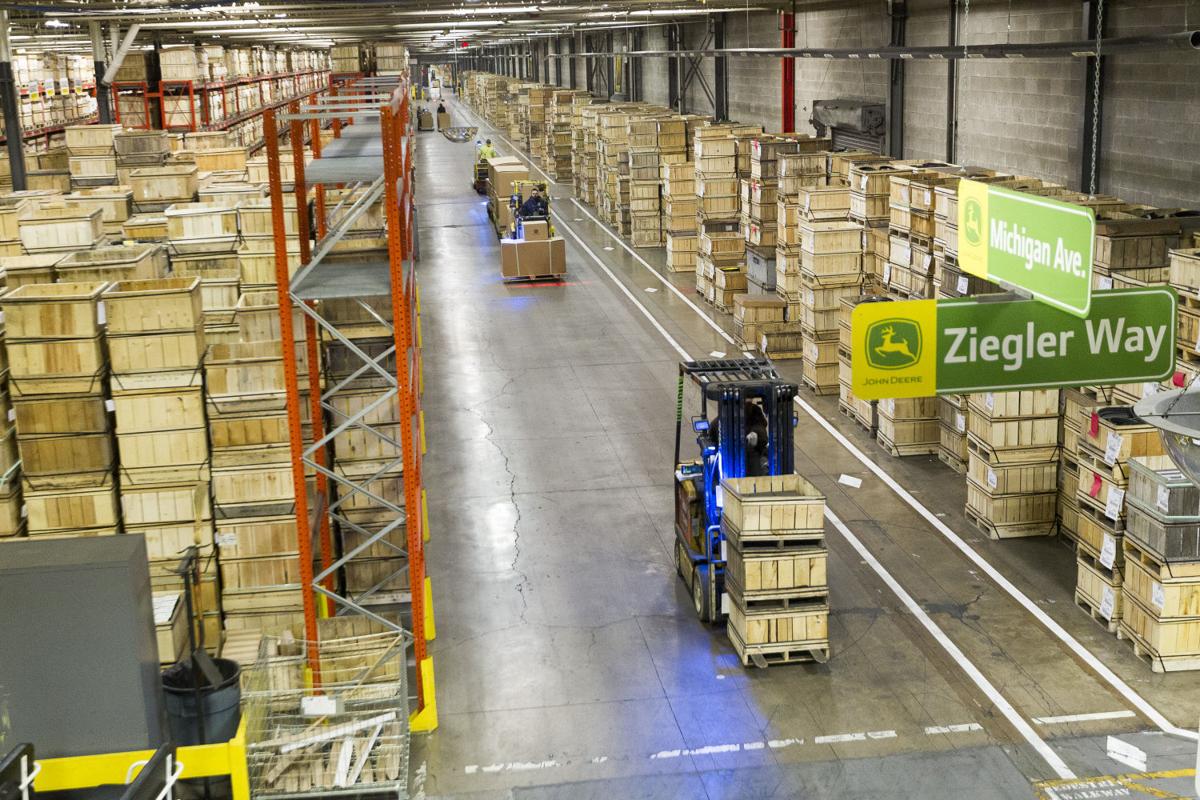 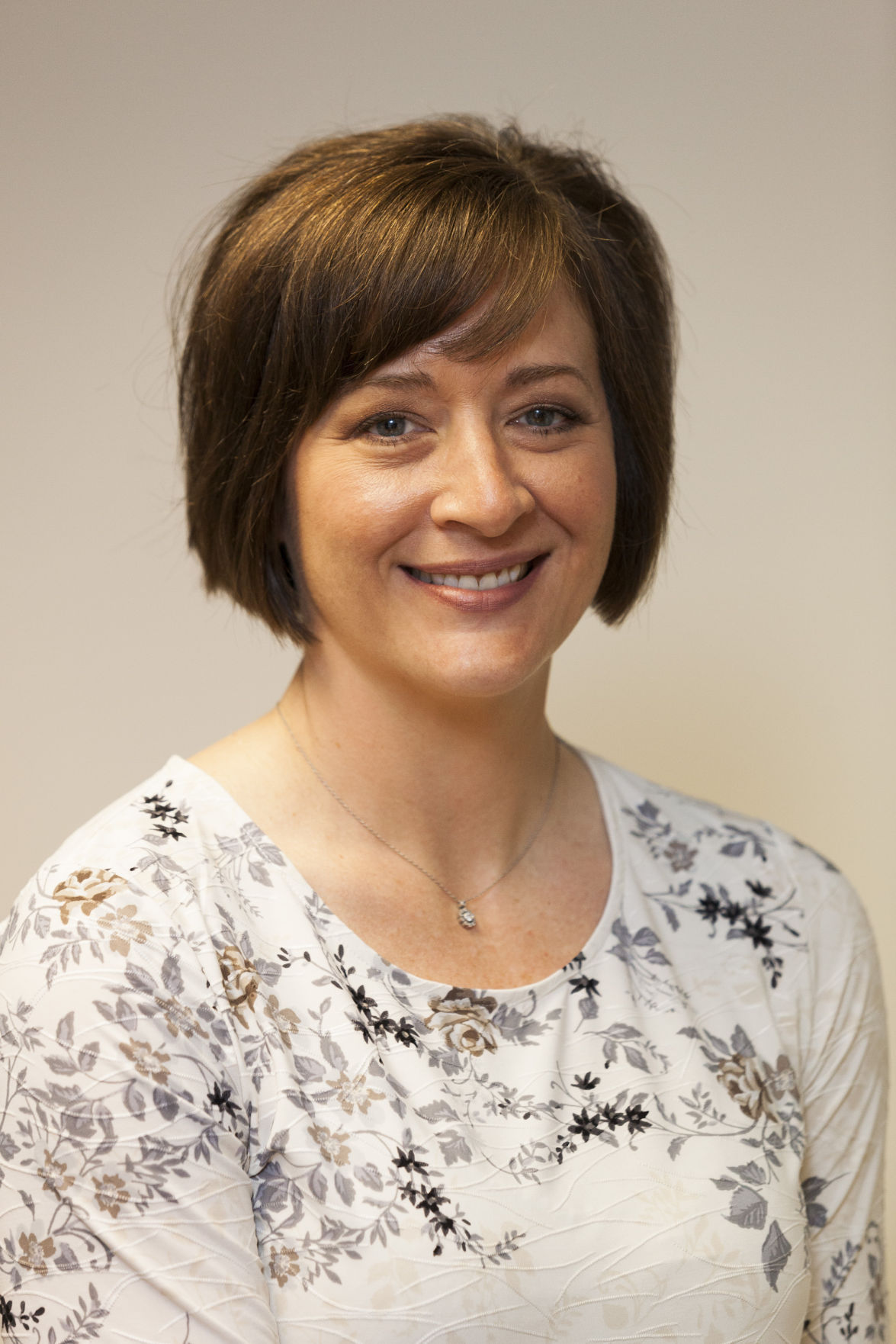 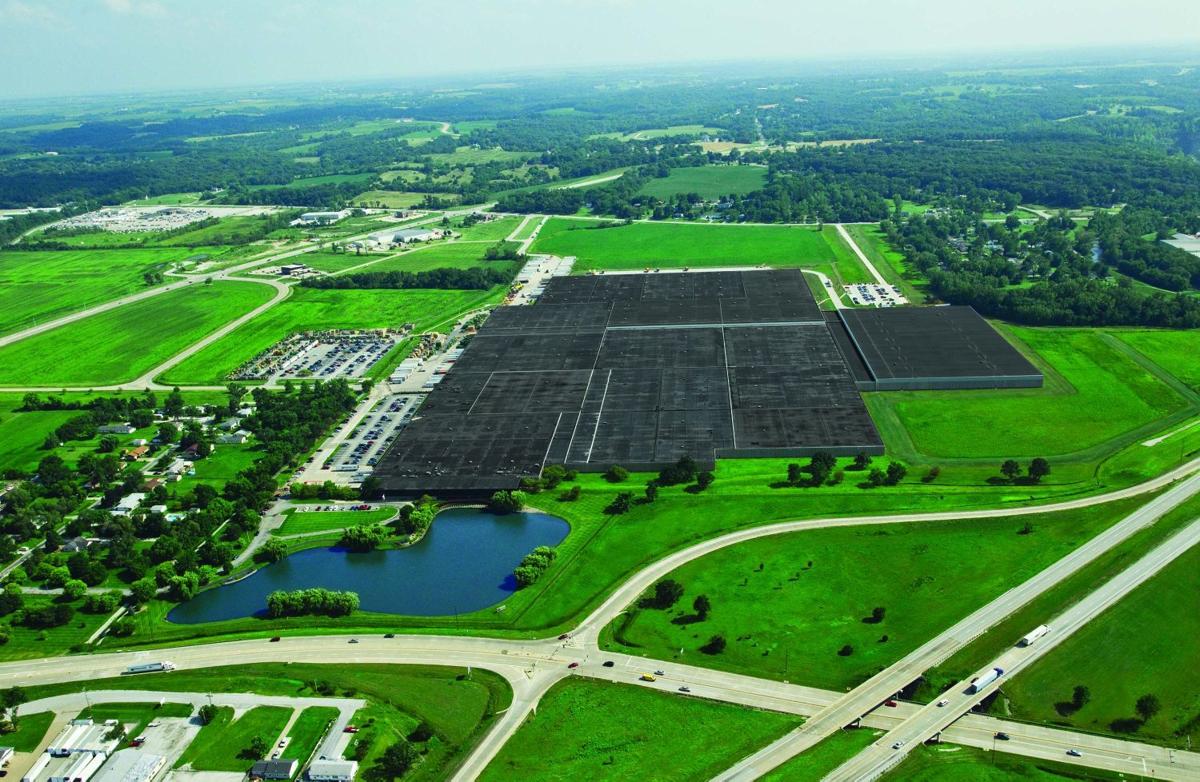 When farmers are working to get their crops in the ground — or out — it can be a race against the clock, and an equipment break can mean down time during a crucial season.

But if its a green machine, the farmer has a lifeline to the spare parts needed through the John Deere North American Parts Distribution Center in Milan. The facility is tasked with delivering the right parts whenever and wherever they are needed to keep customers running. In addition to agricultural customers, the center supports Deere's construction/forestry and turf equipment customers.

Built in 1973 along Airport Road, the Parts Distribution Center, or PDC for short, offers support to John Deere dealers and customers 24 hours a day/seven days a week. With planting season in full gear, PDC workers have a heightened sense of urgency inside the enormous, half-mile wide warehouse. Each weekday, hundreds of PDC employees cover three shifts sorting, picking, packing and shipping orders. The facility employs 1,000 people.

"Customers buy our products because of the good, strong up time," Marcia Hartman, PDC's operations manager, said of the John Deere brand. But when there is a breakdown, customers turn to their dealership for replacement parts. If a dealer does not have a certain part in stock, "we promise they will have it in 24 hours. And 90 percent of our dealers will have it pre-8 a.m. the next day."

Emergency orders, which inside the warehouse are known as FLASH, are in addition to the regular stock replenishment deliveries made daily to a network of 1,400 dealers. "We can reach 95 percent of our dealers in North America in two days or less," she added.

Traditionally, PDC workers handle more of the standard orders on a daily basis. But unexpected FLASH orders come in every day. The FLASH system stands for Fast Locating and Special Handling. FLASH+ are emergency orders that arrive after normal working hours and on Sundays. In most cases, they too can be shipped globally in 24 to 48 hours.

"We spend a lot of time analyzing parts availability," she said adding that Deere tracks the ordering pattern and volumes of dealers year-round.

Last year, PDC's fleet of 100 trucks and 200 trailers traveled more than 18 million miles across North America. She said weather, road closures and unexpected challenges, such as a port closure, can play havoc on the schedule. "With the tight timelines we have, if we get stuck on the road six to eight hours, that is a big deal."

Part of the company's Worldwide Parts Services, PDC is Deere's largest logistics operation in the world at 2.65 million square feet, or 61 acres under roof. "We're one of the two largest warehouses in North America," she said. Ford is the other. Over the years, it has had seven major expansions, the last of which was in 2009-2010 when 450,000 square feet was added.

"We support every product line John Deere has," she said, adding that the worldwide operation supports more than 3,000 dealers and 20 global parts locations.

According to Hartman, the volume of orders has risen recently as farmers have returned to the fields for planting and as the construction season gets in full swing.

With more than 500 vehicles on site, workers are constantly on the move through the rows of floor-to-ceiling storage racks. From forklifts to hand carts, trams and programmable, unmanned vehicles, workers lift and move parts through the acres of floor space to packaging and shipping and eventually out the dock doors to the fleet of tractor trailers. Vehicles all shine blue lights in addition to honking to alert others they are passing through an area.

Before the Milan facility was built, Deere's marketing units ran U.S. and Canadian parts depots receiving parts directly from the factories and suppliers. The Construction & Forestry division launched the Industrial Parts Warehouse when Milan opened. Not long after, the warehouse expanded in 1975 and the Parts Distribution Warehouse was created. It later was renamed PDC.

'Journey of a part'

Each day, PDC employees are engaged in both the stocking of new parts and the picking of parts for orders.

"The journey of a part is we receive material every day from dealers and vendors. We're always getting orders and processing, which makes us different from a factory," Hartman said. "A factory knows how many parts they are going to make ... we don't know what tomorrow is going to look like."

While some crews are receiving, inspecting and stocking parts, a majority work on the picking side of the business — filling orders. Those orders that must travel the farthest geographically are the first to be picked, she said. Orders are placed online and through Deere's computerized order management system.

According to Hartman, most her workers have less than 10 years with Deere and most start as pickers and move up to stocking. The ratio of pickers to stockers is about 3-to-1.

Nearly 100 miles of storage racks hold the hundreds of thousands of part numbers. The departments are divided by function as well as part size. But the picking process is the same, said Kim Larson, a supervisor from Moline. For each order, employees receive a pick ticket listing all the parts in an individual order as well as the order they should be picked for packaging. "We pick the heaviest part first, because you want that at the bottom of the box," she said.

Larson, a seven-year employee, leads a team that is responsible for the the largest and heaviest items. "It's parts mostly for harvest time, like augers," she said, adding that her department picks items such as rims, wheels, cabs and engines. Though much of the work involves a forklift, she said their work is very physical.

Harry Henderson, Milan, is a picker in Department 148, a small parts department, with nearly seven years there. "The set-up makes it easy for us," he said. From the pick ticket, he said workers know "where you are getting it in the warehouse, the weight and how many of it. It also tells you what size of box to use.''

With employee safety always the goal, Larson said the warehouse regularly reviews how parts are being lifted and moved to implement process improvements when it can. "We bring forth ideas that have changed methods based on employees' ideas," she said, adding the blue lights on the vehicles were a result of that process.

She also credited a new tilt table to the process improvement measures. The table used to hold boxes for packing tilts so that workers can avoid bending down into the box.

Hartman said they also regularly are improving how items are stored and considering "how we are using our space. We are really good at how we use our space," she said.

While pickers take parts from bins on the ground level, extra stock fills shelves above on the miles and miles of racks.

Alden Global Capital is making a move to buy Lee Enterprises. What does that mean?

Tienda Mexicana Abarrotes Carrillo's building was damaged in a fire on Saturday evening. The Quad-Cities community is offering the owners and their family support.

Davenport School Districts offer apprenticeships to high school students across a multitude of careers as either an alternative or precursor to college.

The Hy-Vee on John Deere Road, Moline will close permanently starting Jan. 1, 2022, according to a Dec. 1 news release. Online pick-up services at the location will be unavailable starting on Monday, Dec. 6.

CARMEL, Ind. — Byrider, one of America’s largest buy-here-pay-here used-car dealerships and franchise systems, presented a Franchise of the Ye…

DALLAS — Raising Cane’s Chicken Fingers is celebrating its signature sauce being named No. 1 in the business by giving away free Cane’s Sauce …

Dawn Schmitt has been named the general manager at WQPT of the Quad Cities at Western Illinois University, effective Dec. 1.

To celebrate the holiday season, UScellular has donated items to Humility Homes & Services in Davenport, the East Moline Police Department…

Box parts are ready to be moved and loaded onto a truck at one of the 99 dock doors, left, at John Deere Parts Distribution Center in Milan.

Johnnie Lathan, a D148 picker at John Deere North American Parts Distribution Center, staples up boxes of parts to be shipped out from the Milan facility.