Farmers are harvesting fields now, so if an integral part breaks during the strike against John Deere, they may not be able to replace it quickly enough. 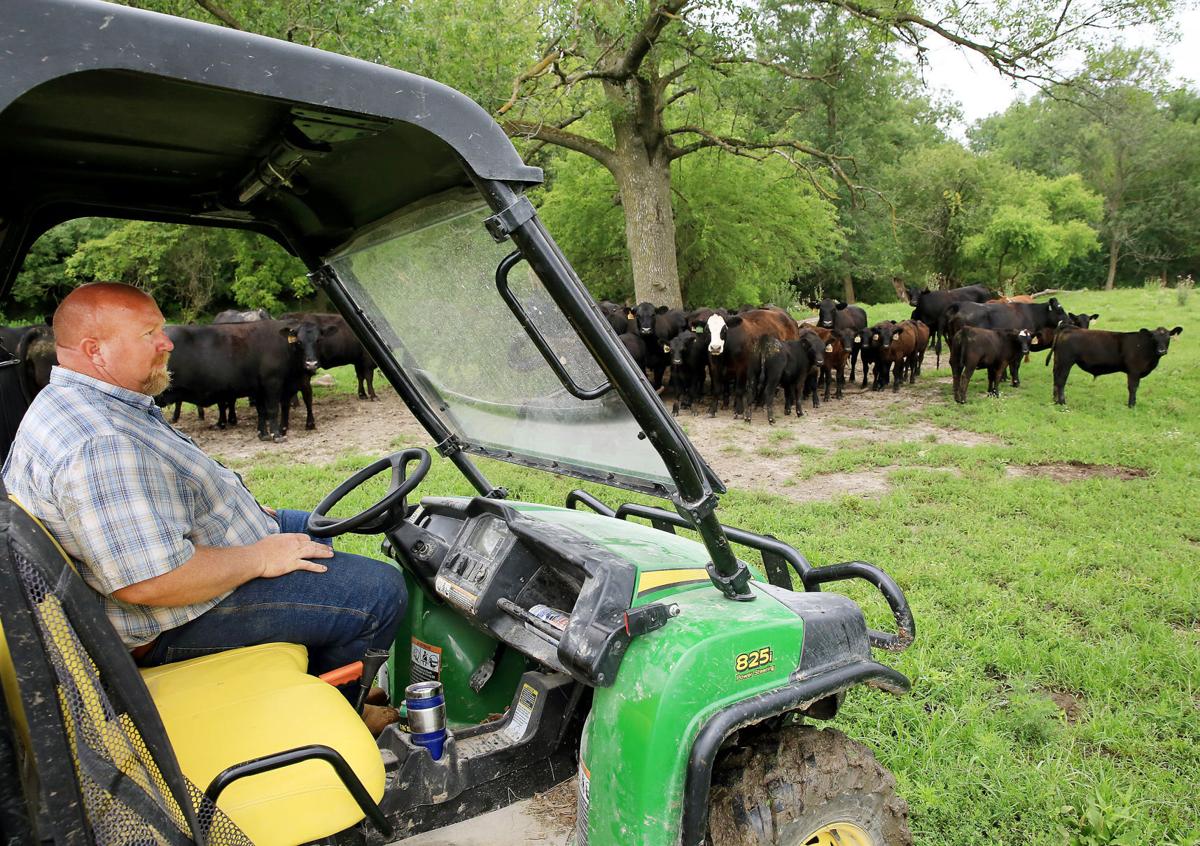 Robb Ewoldt drives out to take a look at some of the cattle on his rural Blue Grass farm Monday, July 24, 2017.

Earlier this week, DeWitt farmer Joe Dierickx ordered a new cornhead tip. He'd noticed the part was bent, and while it was still operational, it needed to be fixed.

Usually Dierickx would have the part two or three days after ordering it. However, with pandemic-caused supply shortages and a Deere & Co. strike starting this week, he couldn't even get an estimate on when it will arrive.

"I'm kind of caught in the middle of it," Dierickx said.

UAW workers in Iowa, Illinois and Kansas took to the picket line early Thursday morning after the 10,000-strong union and Deere & Co., better known as John Deere, failed to reach an agreement by Thursday. The strike, depending on how long it lasts, will hurt already struggling supply chains.

Sloan Implement has dealt with delays on orders without knowing when they'll arrive throughout the COVID-19 pandemic, and parts from all across the board have been hard to stock.

The most important thing is keeping machines working through harvest, about six weeks. The dealer has been relying more than usual on repairing parts rather than replacing them, and that practice will continue.

"We're going to just keep right on forging ahead as best we can," Maloney said.

Deere has been sending out communications to the dealers, Maloney said, and what he's heard indicates that the company is working to continue production of parts. Deere is still accepting orders, and has other employees filling in for the union workers.

Right now he isn't sure how much the strike will affect supply, but availability of parts will be the most immediate impact.

"The ideal situation is for the UAW to be able to work out an agreement and get it signed as soon as possible, get everything running back to normal," Maloney said.

Visiting local dealerships, Dierickx said it's apparent they don't have the stock they usually would. There aren't as many tractors, combines and other pieces of equipment sitting out for sale, and the shelves don't carry parts they usually have in abundance.

"This strike is just compounding kind of a bad situation," Dierickx said.

He hopes that a deal is struck before he and other farmers start ordering parts in February for planting in the spring. Once harvest is finished, crop farmers won't have to worry about much until late winter, but livestock farmers may need equipment throughout the colder months, he said.

Robb Ewoldt, a soybean and livestock farmer outside of Davenport, said he'd been lucky so far in not having issues with getting parts he needed.

While the strike isn't a situation he needs to actively deal with, it's a concern that sits in the back of his mind. There are many what-ifs that could become real problems, like equipment failure or need to replace a part that just can't be found.

Those what-ifs can snowball. If an integral part breaks, they may not be able to replace it. If they can't replace it, the equipment may not run right, or at all. If it can't run, they can't harvest, and they have only so much time before it's too late.

He knows one farmer with a broken combine and no assurances that it will be fixed soon.

"That's a crop that we grow, we sell to pay our bills, and if we can't harvest it and sell it, we're in trouble," Ewoldt said.

Dierickx said if there had been a catastrophic break on his equipment rather than a small one, he wasn't sure what Plan B would have been.

Deere is known for its availability of parts and good, reliable equipment, he said. Those are the main reasons people buy Deere products.

"If they don't keep having that (availability of parts), it'll be a concern for all of us," he said.

Farmers are harvesting fields now, so if an integral part breaks during the strike against John Deere, they may not be able to replace it quickly enough.

Robb Ewoldt drives out to take a look at some of the cattle on his rural Blue Grass farm Monday, July 24, 2017.