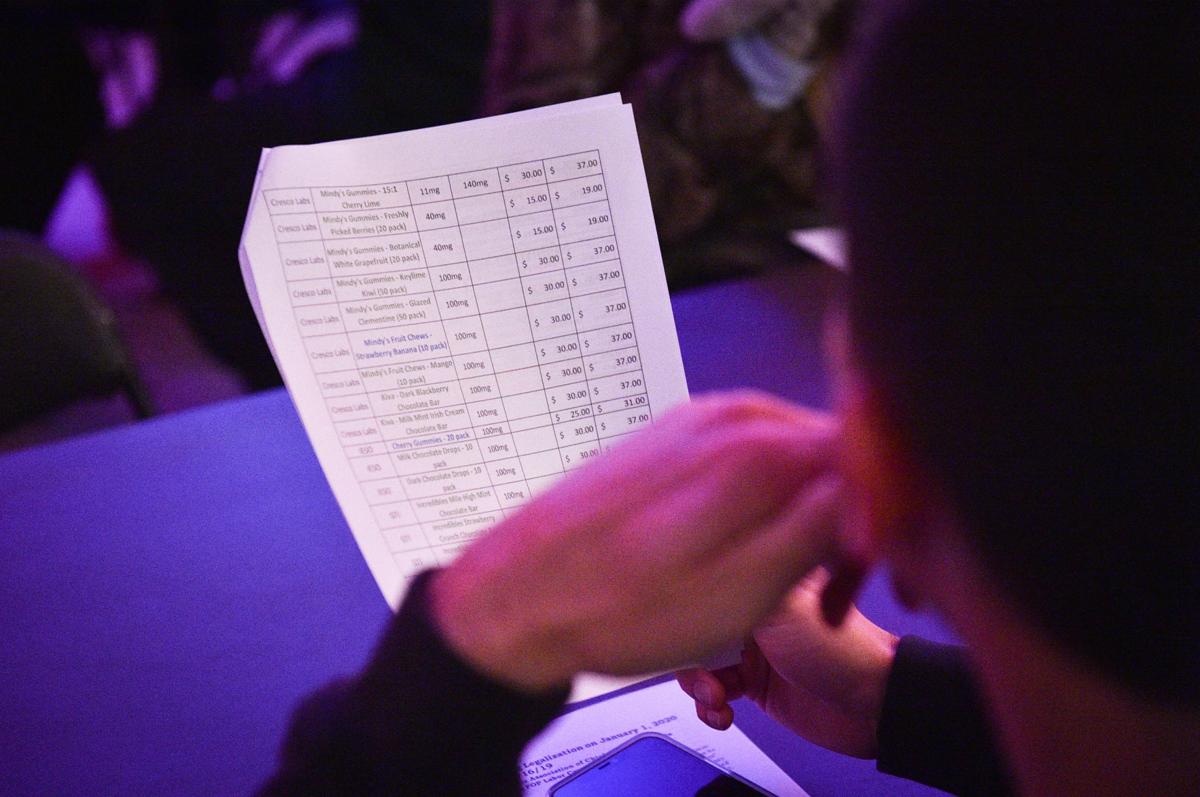 A customer looks over Nature's Treatment of Illinois' menu inside a warming tent on Jan. 1 in Milan. New Year's Day was the first day of legal recreational cannabis sales in Illinois. 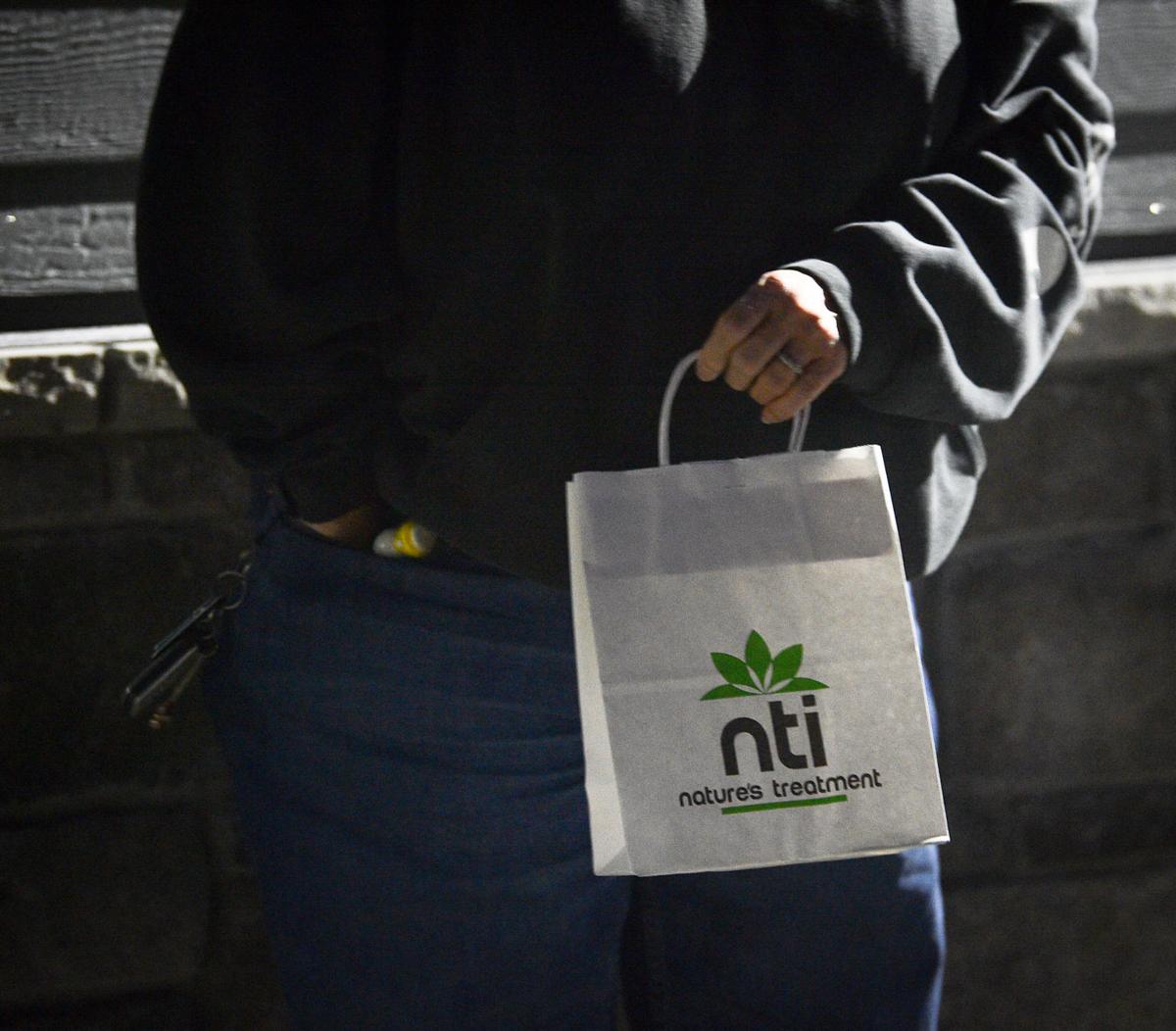 There have been 2,800 recreational marijuana transactions and counting in Milan.

That total was provided by Shannon Ballegeer, manager at Nature’s Treatment of Illinois, as of about 1:30 p.m. Monday, the fifth day of adult-use cannabis sales at the store. NTI was closed Sunday.

Tickets have continued to be distributed to customers with wait times being about two hours each day. Parking is limited at NTI as half of the lot is dedicated to medical patients, who have their own dispensary and separate entrance and exit than the recreational side.

Supplies began limited, with no cannabis flower to smoke, as customers could choose between concentrated forms of THC, the psychoactive ingredient of cannabis that produces a sense of euphoria, or a high, in users; edibles, food products that have been infused with THC; and cartridges for vaping devices. As of about 1:30 p.m. Monday, edibles were still in stock at NTI.

The Milan dispensary has a running list of what is in stock for recreational users available online for potential customers to check out before driving to the village. A limit on two edible items per customer was lifted by NTI before sales began Monday morning.

“We have plenty of edibles in stock, but everything else is running very low,” Ballegeer said Monday afternoon. “I think we would have had longer wait times and more transactions if flower had been available.”

The Illinois Department of Financial and Professional Regulation announced Monday that statewide sales, between Jan. 1 and Jan. 5, totaled about $10.8 million with 271,169 transactions. The first day included about $3.17 million in sales and about 77,000 transactions.

The state entity also announced Monday that more than 700 applicants submitted applications for almost 4,000 licenses for the dispensary window that closed Jan. 2. An additional 75 dispensary licenses will be awarded from that pool, including one for the area of Rock Island, Henry and Mercer counties.

Milan dispensary NTI runs out of adult-use cannabis products; to be restocked Thursday

For the first time, Milan-based Nature's Treatment of Illinois has run out of recreational marijuana products as of about mid-day Tuesday.

Illinois: Statewide sales of adult-use cannabis near $150 million mark for the year

Statewide sales of adult-use cannabis drew near to the $150 million threshold in April.

Six months in, the supply concerns continue for adult-use cannabis sales at Nature’s Treatment of Illinois in Milan.

'It's the end of prohibition': Recreational marijuana sales began early Wednesday in Illinois

The faces of legalization: These 4 people helped bring recreational cannabis to the Quad-Cities

As Quad-Citians settle into the legal recreational marijuana market in Illinois, new faces — and some who have been in the Quad-Cities for yea…

Recreational marijuana sales could go on for days in Milan.

Marijuana is officially legal in Illinois tomorrow. Which cities in Illinois will allow dispensaries to set up shop?

Countdown to Legalization: Read our stories ahead of marijuana legalization in Illinois

Countdown to Legalization is a week-long series about the upcoming legalization of marijuana in Illinois. Each day leading up to Jan. 1, we'll…

Illinois has a major supply shortage of legal cannabis. Could a pipeline to buy product from other states help?

“We can literally move millions of people in those states out of illicit markets years sooner, and get the industry actually up and running in a real way within a year if we could move product from state to state."

States with the largest tax burden

How PPP Rules for Small Businesses Have Changed This Time Around

How PPP Rules for Small Businesses Have Changed This Time Around

A customer looks over Nature's Treatment of Illinois' menu inside a warming tent on Jan. 1 in Milan. New Year's Day was the first day of legal recreational cannabis sales in Illinois.