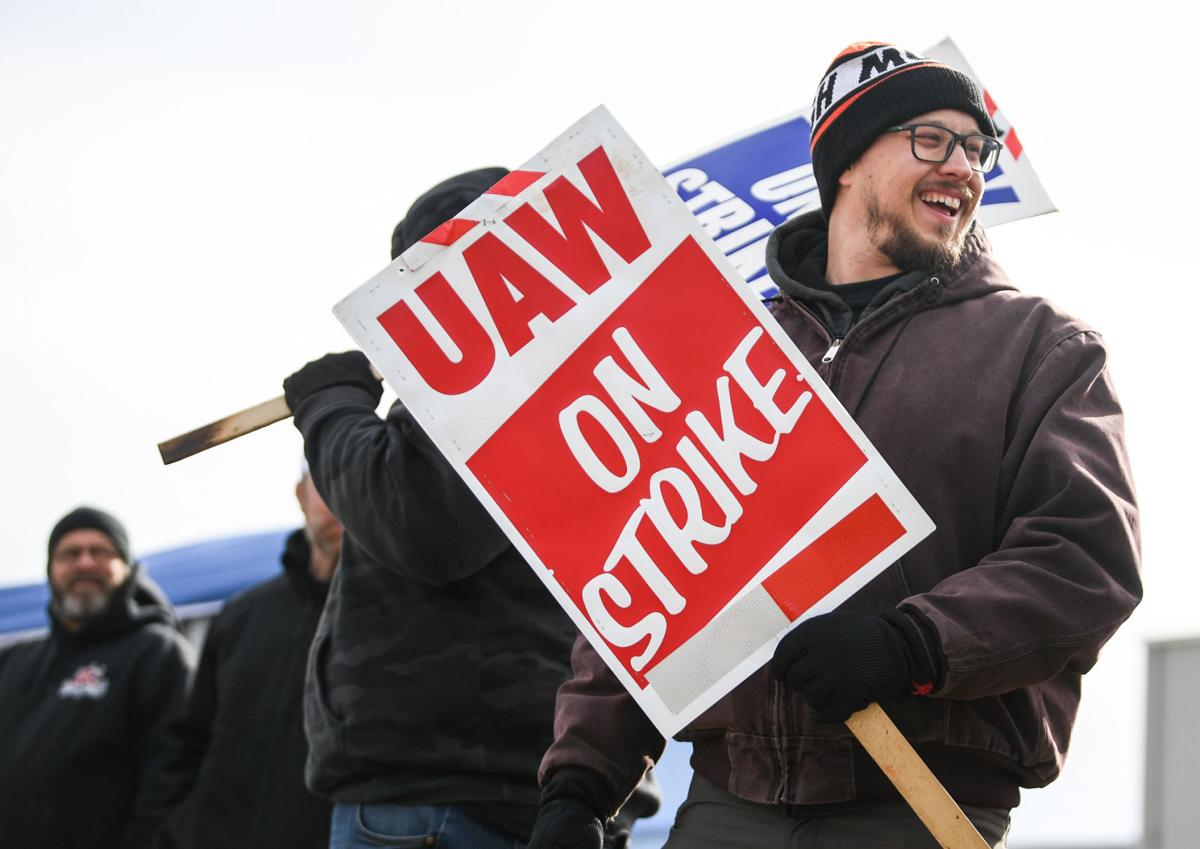 Mac Flack, of Iowa City, laughs as he and others picket outside John Deere Harvester Works on Monday in East Moline. Some UAW members are frustrated by the union's executive leadership and want to change how they are elected. 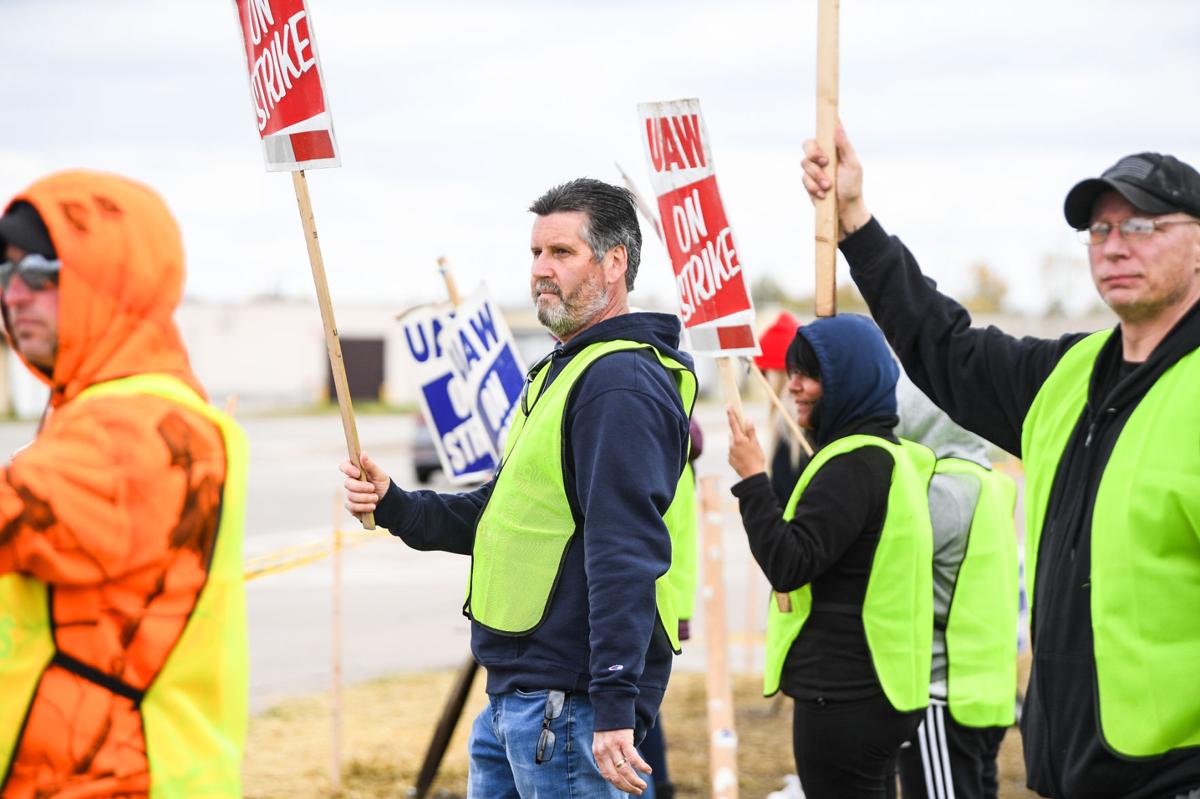 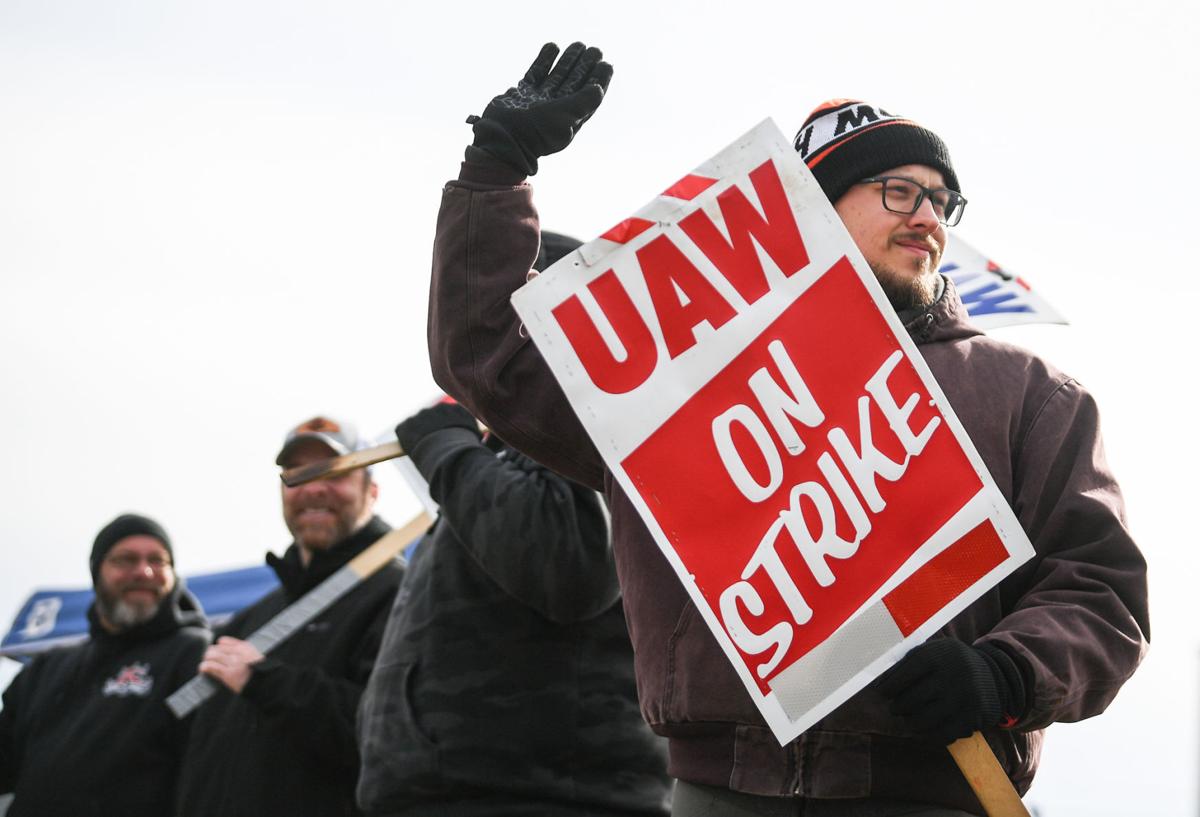 Mac Flack, of Iowa City, waves at passing cars as he and others picket outside John Deere Harvester Works Monday, Nov. 1, 2021, in East Moline. 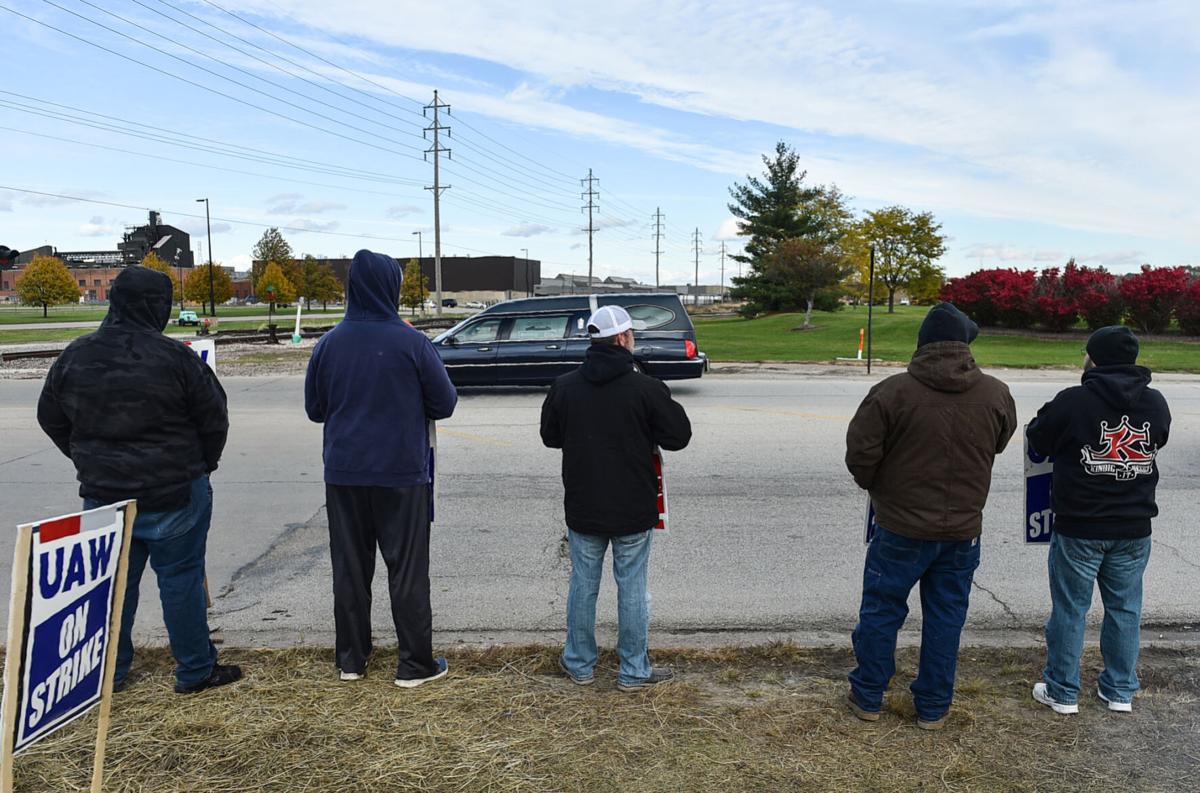 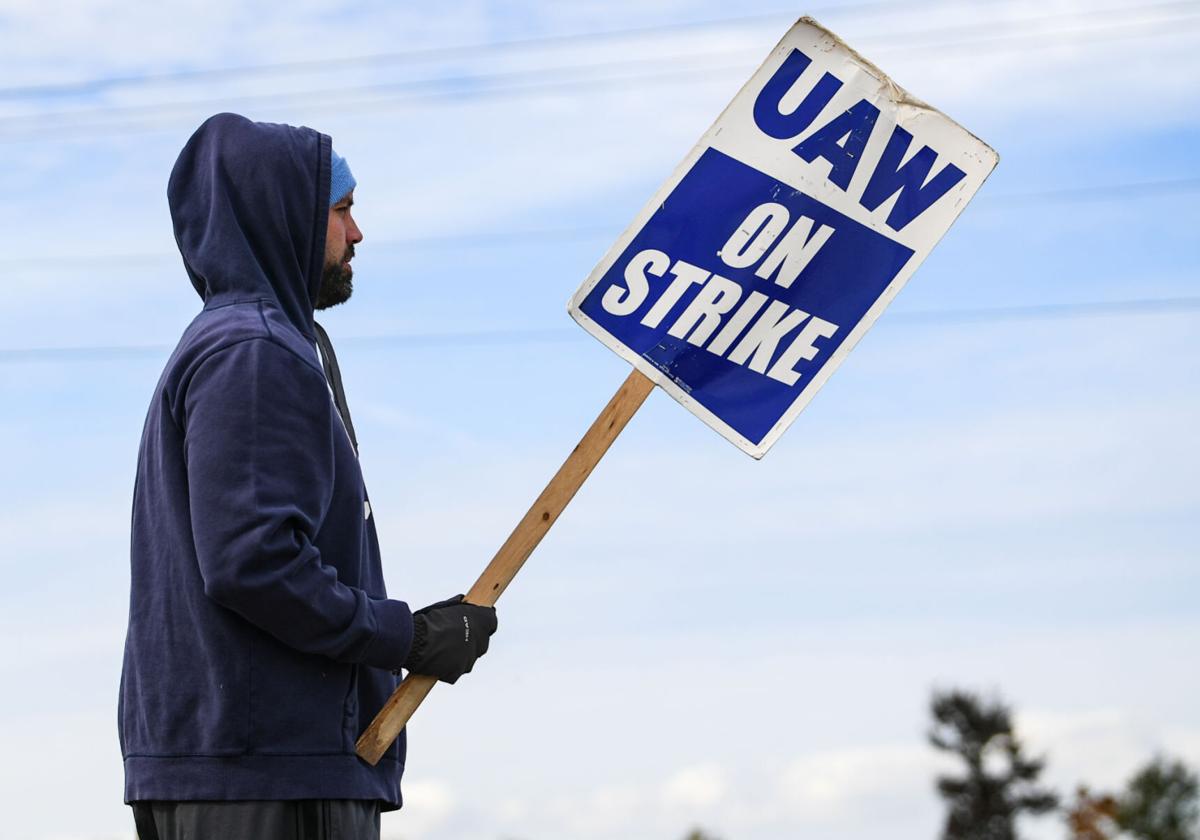 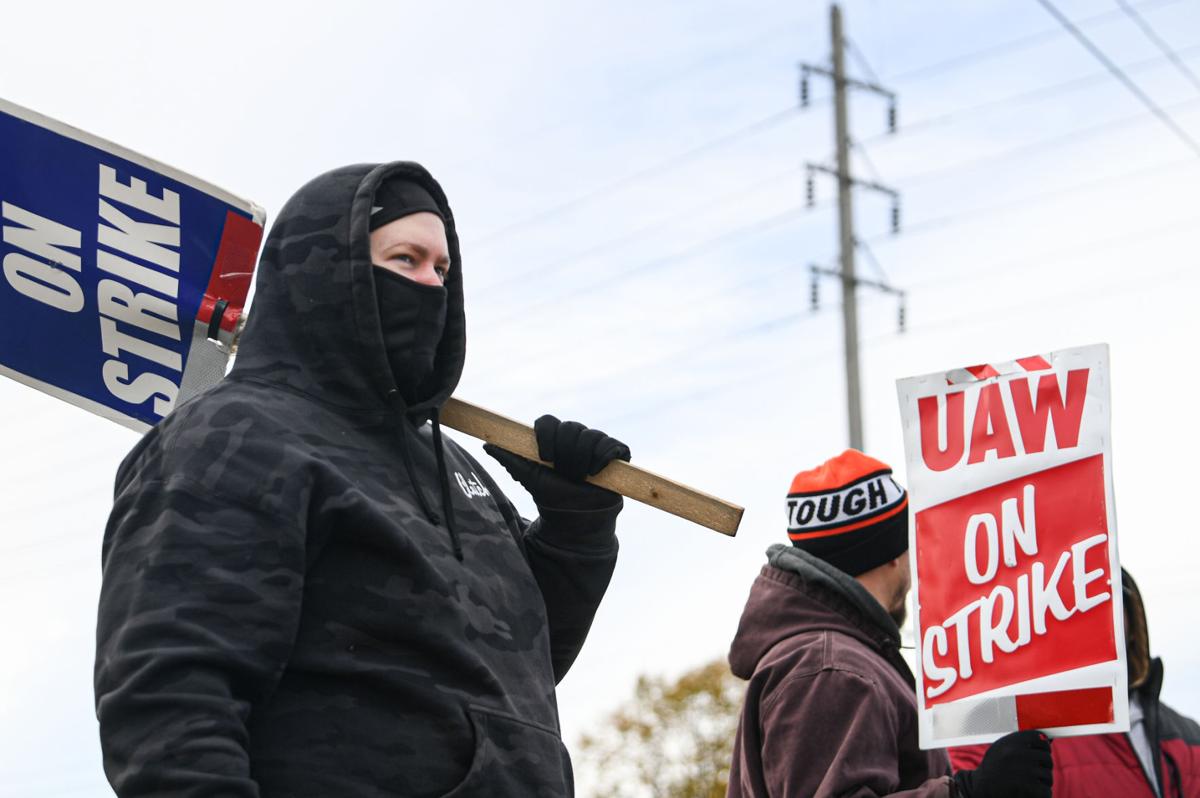 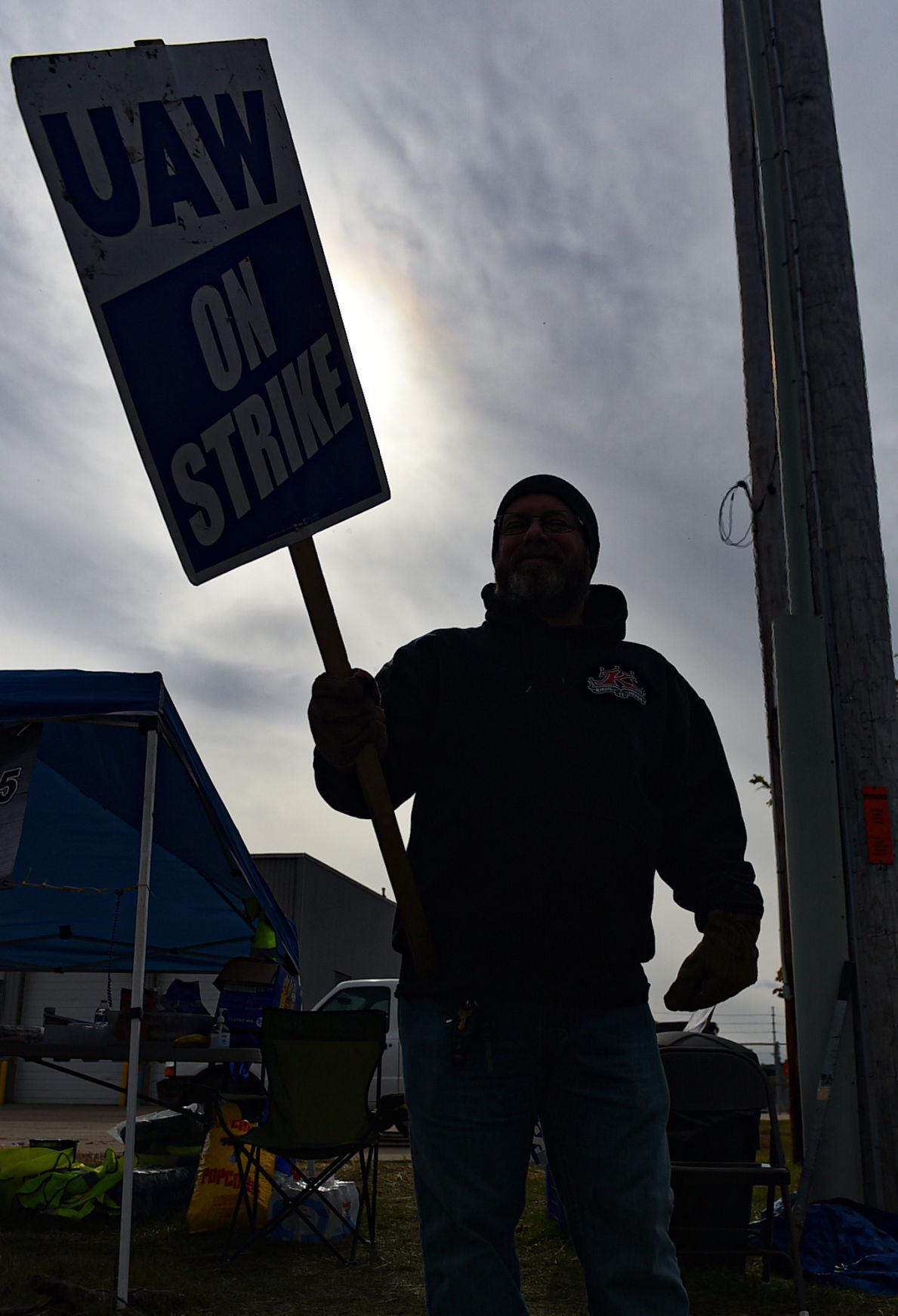 Mike Bartosch, of Geneseo, is silhouetted as he and others picket outside John Deere Harvester Works Monday, Nov. 1, 2021, in East Moline.

As UAW workers returned to the picket lines on Day 19, bundled up against the cold, they were hours away from voting on a new tentative agreement.

Deere & Co. and the United Automobile, Aerospace, and Agricultural Implement Workers of America reached a tentative six-year agreement on Saturday covering about 10,100 production and maintenance employees at 12 facilities in Iowa, Illinois and Kansas. The UAW members will vote on the agreement Tuesday.

Both sides declined comment Monday, saying they would respect the process of evaluation and voting.

Paul Iversen, labor expert at The University of Iowa Labor Center, said it is impossible to speculate how the vote will go.

“But one thing is clear that the strike has been successful in the sense that the membership has stuck together, and the community has supported them,” Iversen said. “Whatever the results of the vote tomorrow, the Deere workers can hold their head high and be proud of themselves for standing up for themselves and for future generations.”

The new tentative agreement offers improved wages and benefits from the initial agreement, which was overwhelmingly voted down Oct. 10.

According to a contract summary, workers would receive an immediate 10% increase in wages in the first year and an additional 5% in the third and fifth years.

Base rate wage increases for the second and third increase at 5% are the same as the rejected agreement, but cost of living adjustments (COLA) were added to the new one.

The proposed COLA would adjust every three months with inflation. The first adjustment would be effective in December.

One Milan union member said the reinstatement of COLA was enough to vote in favor of the contract.

“It is a huge improvement over the first contract,” they said. “It checked boxes that were what caused me to vote no the first time.”

But a worker at Davenport Works didn't like that the increase is dependent on inflation rates, which are estimated by economists. They planned to vote no, because of the uncertainty that brings.

“They're counting on something that's not always there,” the worker said. “Ten years ago, when we still had COLA, inflation increased on us, and yet, we lost something like 36 cents an hour. I brought that to the union and said, ‘Hey, what's going on, inflation went up and yet our hourly wage went down.’ And he said, ’Well, John Deere uses such and such index which hasn't taken account, say, like gas prices, or milk or things that affect us.’”

On the off years, the second, fourth, and six years, workers would get 3% lump sum payments. Upon ratification of the contract, workers would receive a $8,500 bonus.

“I'd rather see a raise every year,” the Davenport worker said. “That way, you have something to build on. The lump sum payouts basically gives them an out where they're only doing 2 to 3% of your wage. When you receive that payment, instead of it being paid as in or taxed as income, it's taxed as a gift tax. So you're seeing high levels of taxation.”

Wages that include CIPP rates, an incentive program to improve productivity in the Deere plants, are higher. But workers say that program is difficult to achieve and has flaws, so the wages offered aren’t always attainable, the Milan worker said.

“As far as I can tell (the agreement) didn’t create a path to fix problems,” they said.

There would be no changes in the cost of health insurance under the new agreement. Workers would pay $0 in premiums, have no deductibles or coinsurance, and no changes in co-pays.

New hires would receive healthcare coverage after 30 days of employment on the first of the following month.

Current and future union workers would choose between the traditional-plus and choice-plus retirement plans.

The traditional-plus plan allows employees to have a defined benefits pension, an increased multiplier for monthly pension for each year of service and would fully own their pension after three years of service.

The traditional-plus plan’s post-retirement healthcare fund offers a cash balance savings at 2.5% for one to four years of service, 3% for five to 14 years, and 4% to 15 years and over. There will also be $2,000 of seed money per year of service.

The Milan worker said having the pension option accessible to all employees , current or future, was a win for the workforce.

“So long as it's a choice you can do if you want to,” the worker said.

The choice-plus plan is offered to all employees hired after 1997. It includes a dollar for dollar 401(k) match up to 6% for 2022, then $0.70-$1 match for each year after. The specific match amount would be determined based on company profits. The company will also contribute 5% of employees’ annual wages to their 401(k).

The Davenport worker didn't like the 401(k) options and thought the company’s match should be higher.

Prior to the strike, union members worried about conditions for supplemental employees, full-time workers who pay dues, but receive fewer benefits than full UAW members.

The current union’s master agreement allows supplemental workers to be paid about $5 less than full corps members. Supplemental employees also only have three days of paid leave and sometimes work holidays and Sundays.

There is no change to that in the new offer.

“I would like to have seen the supplemental program go away,” the Milan worker said. “There are still going to be people out there that are going to be hired with a different status than me.”

Some said they were struggling to be prepared to vote on the offer on Tuesday.

The Davenport worker wanted the full contract available online — only the summary is now — because it has more complete information.

“If you read the summary everything says words, like assuming, estimated rate, and things of that nature,” the worker said.

The full contract and the summary are available at union halls, and those involved in the negotiations are explaining it to the others. And there will be a meeting before the vote begins.

“All of the little parts we won’t know until we have our meeting tomorrow,” a Milan worker said. “Maybe it just means the small things haven’t changed.”

Another Milan worker said he visited the union hall, where he learned the plan offered more than he realized from the summary.

Iverson said the UAW’s demands may not all be met, but that this offer raise the bar for future negotiations.

“It's not a loss to not get everything that you asked for,” Iversen said. “It's the overall framework, and the quality of the agreement that determines whether it's worth passing.”

Deere is only one of multiple major unions that have gone on strike throughout this past year. The UAW’s successful strike will influence other strikes and add to the increasing labor movement, according to Liz Shuler, president of AFL-CIO, who visited the Deere picket lines on Monday.

“UAW members saw the greed that was going on because the CEO was getting these big bonuses and huge paychecks and they said, ‘You know what, we're the ones that make this company wealthy, so we should be demanding more,’” Shuler said. “That is very symbolic of what's going on all across the country.”

Ratification voting is unique to each local, but will place in-person on Tuesday.

Strike duties are suspended during voting, but will resume after 2 p.m. until ballots are counted for all 11 locals. If the contract is ratified, the strike will end with the notification of results.

A Milan worker said if the contract is not ratified the strike will go on.

“It is in my opinion that it is a fair agreement,” the worker said. “But if it winds up not passing I am going to get back on the line and continue to fight.”

Mac Flack, of Iowa City, laughs as he and others picket outside John Deere Harvester Works on Monday in East Moline. Some UAW members are frustrated by the union's executive leadership and want to change how they are elected.

Mac Flack, of Iowa City, waves at passing cars as he and others picket outside John Deere Harvester Works Monday, Nov. 1, 2021, in East Moline.

Mike Bartosch, of Geneseo, is silhouetted as he and others picket outside John Deere Harvester Works Monday, Nov. 1, 2021, in East Moline.