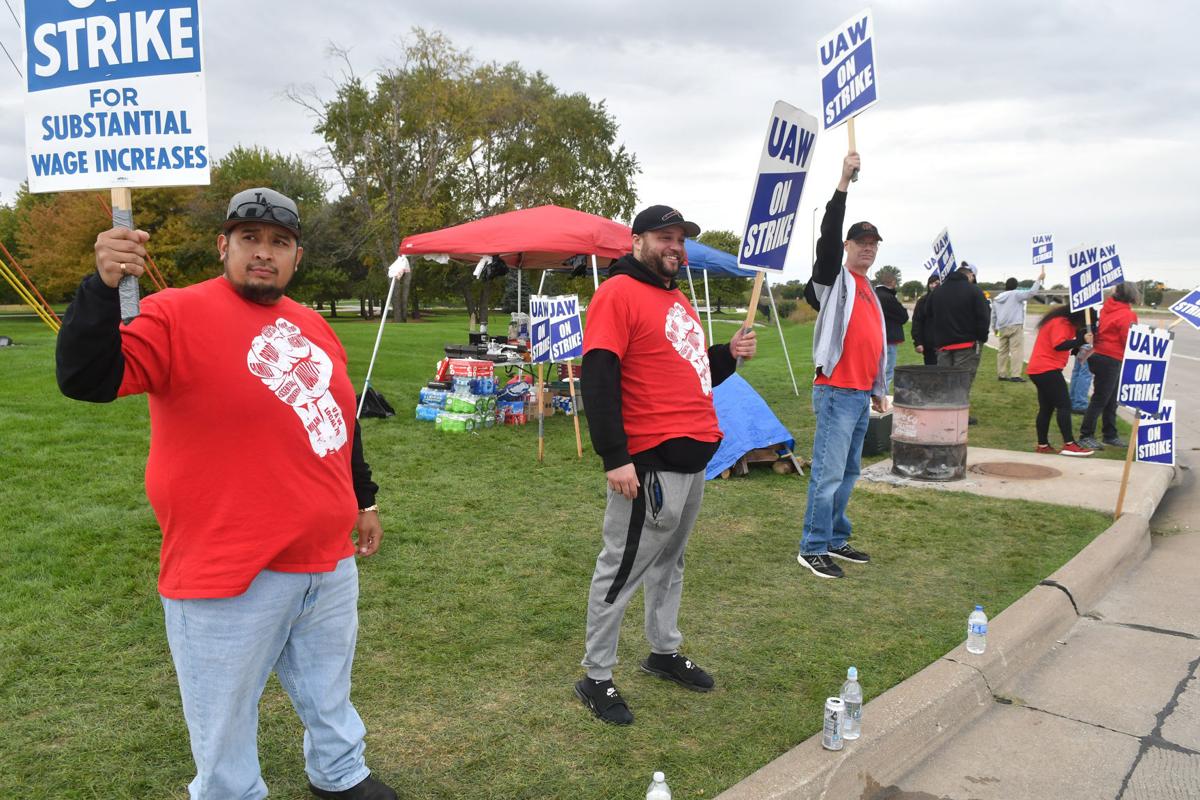 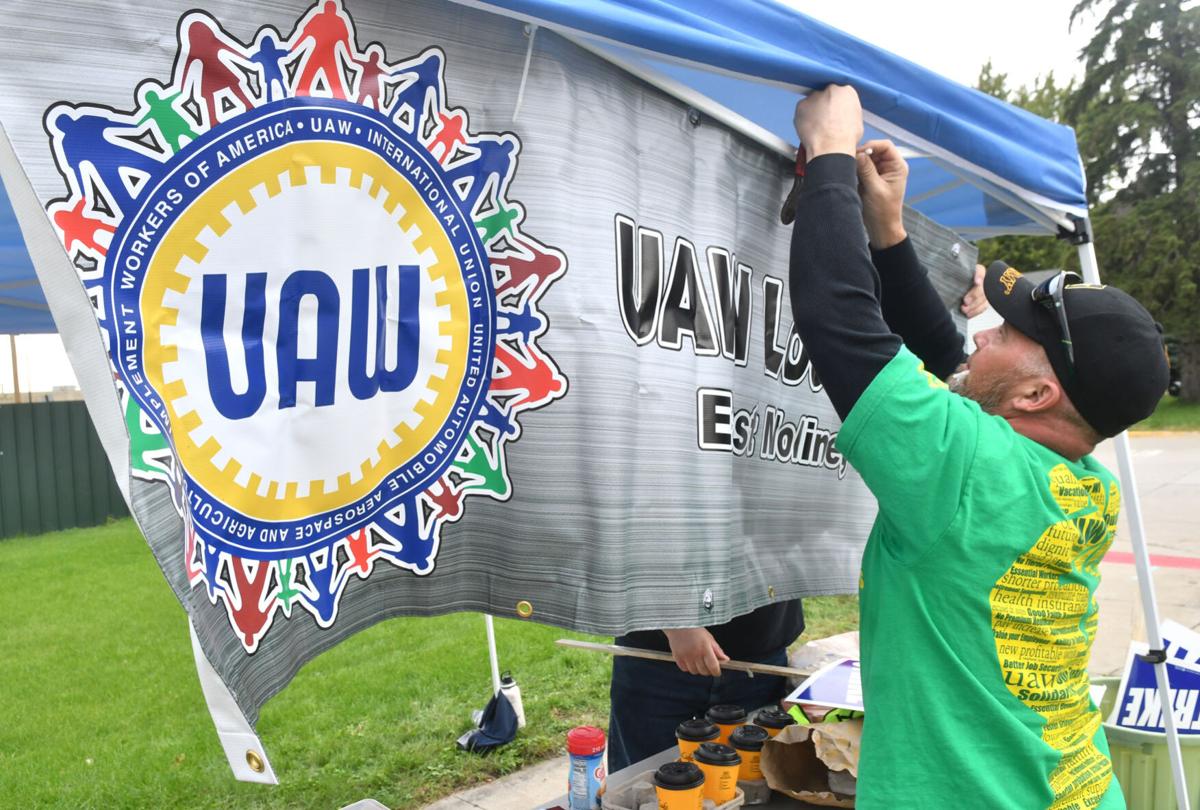 Matt DeLoose with UAW local 865 puts up a banner at the John Deere Harvester Works entrance at 13th Street and Morton Drive, East Moline, during picketing on Friday, Oct. 15. UAW members from New York, Michigan and Ohio, and local members of AFSCME, the American Federation of State, County and Municipal Employees, have been joining Deere's UAW workers on the picket line. 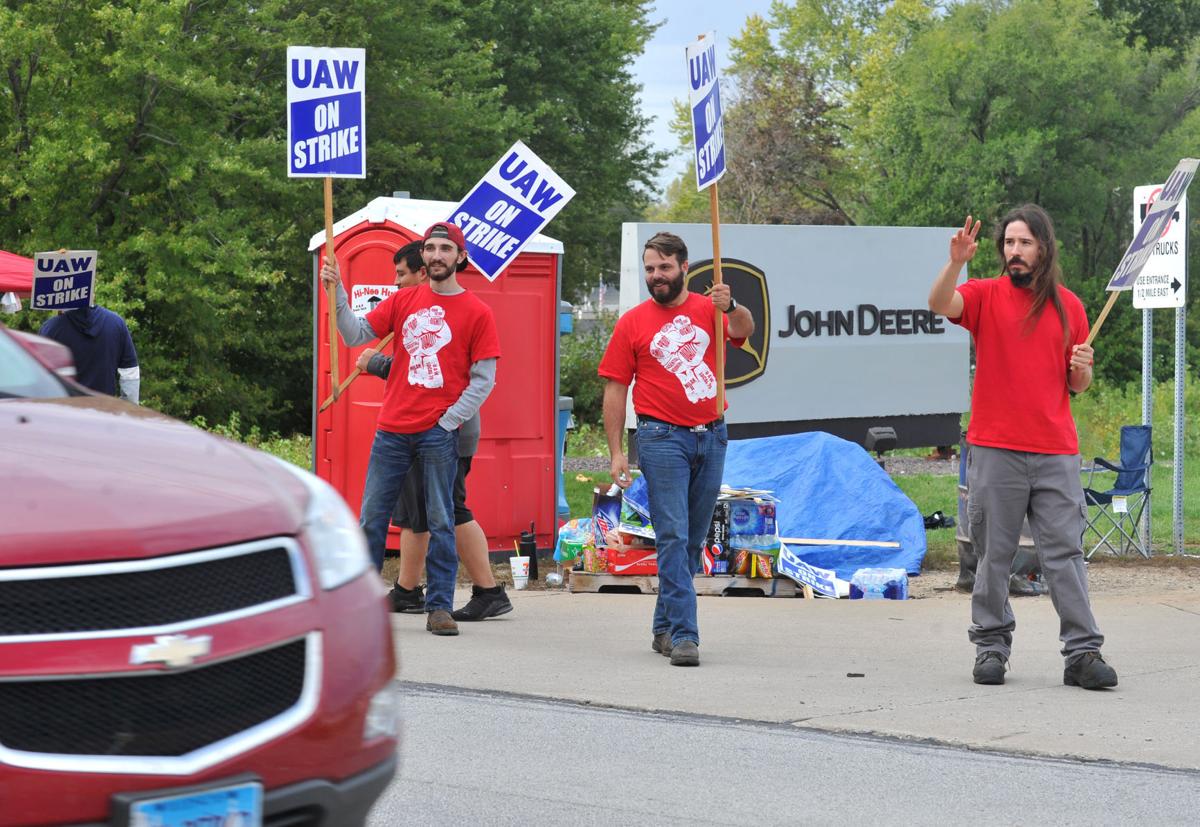 Strikers hold up UAW on strike signs as they waves to motorist in front of the John Deere Parts Distribution Center at the 78th avenue entrance on Friday in Milan.

East Moline Deere plant picketers huddled around two barrel fires at the entrance to their workplace on another gray, drizzly fall morning for the second day of the strike.

Despite the dismal skies, spirits were high among the more than 20 United Automobile, Aerospace and Agricultural Implement Workers of America (UAW) members lining their workplace's entrance on Friday bundled in jackets and sweatshirts.

“It’s only going to get colder,” one union worker remarked while talking to others who gathered in a clump of white and blue “UAW on strike” signs. Despite the impending dropping temperatures that come with late fall and early winter, the workers agreed they were steadfast in remaining in their posts.

The UAW strike crowds were smaller than Thursday, and quieter too, as more workers abided by the schedules their respective strike captains created for workers to ensure that the strike continued 24 hours a day, seven days a week, since the strikes’ start, the earliest beginning early Thursday morning.

The picket schedule is planned in advance with all employees taking one six-hour shift once a week. However, any UAW member can join the line at any time.

“I found it to be very, very relaxing, it's what everybody wanted,” said a union employee picketing outside Davenport Works, which makes construction and forestry equipment.

Striking UAW workers also picketed outside plants in Davenport and Milan. After overwhelmingly voting down a contract Sunday night, the UAW recalled its bargaining committee, effectively ending negotiations, and set a hard strike deadline of 11:59 p.m. Wednesday. The UAW and Deere have not issued new statements at the time of print.

The six-year offer from Deere would have raised wages by roughly 5% over the life of the contract. The deal also limited retirement benefits for workers hired after the contract was ratified. Deere workers have faced forced overtime and poor treatment from managers and other company leaders, multiple employees said on the condition of anonymity, fearing retribution. They said the last contract offer was unacceptable, especially considering the company’s record-high profits over the past year.

Deere is only one of multiple major unions that have gone on strike throughout this past year.

In addition to Deere, Nabisco employees went on strike for weeks before returning to work in September and Kellogg workers entered the second week of their strike on Oct. 13. Over 20,000 healthcare workers at Kaiser Permanente in Oregon and California passed a strike authorization threatening to strike over low wage increases and staff shortages. Across the nation, 60,000 film set workers are preparing to strike on Monday if they can’t reach a new tentative agreement with employers.

Todd Vachon, a labor expert at Rutgers University, said the U.S. is currently experiencing a strike wave, which some on social media have dubbed “striketober.” When a series of labor unions successfully negotiates improved benefits with an employer, it empowers others to do the same.

“You just try to ride the momentum of winning right because winning tends to breed more winning,” Vachon said. “You start to see a rise of kind of labor unrest, bubble up all over the place at once.”

Despite being across different sectors, the unions who have recently organized or discussed the possibility of a strike have one thing in common: they are all frontline workers who have worked throughout the COVID-19 pandemic, sometimes in unsafe conditions.

Paul Iversen, labor expert at the University of Iowa Labor Center, said this is a point of contention for Deere union workers who feel as though they deserve greater pay for the sacrifices they made for the company.

“Throughout the pandemic, in some ways, they literally risked their lives to keep the machines on to keep production going,” Iversen said. “They have produced for John Deere record profits, their most profitable year in history.”

The strike also marks the decline of Deere’s image through their treatment of employees, according to Iversen. Deere markets itself as a family company, taking care of employees and providing premium wages. Iversen said while Deere does have generations of families working for the company, their wages haven’t increased to match inflation and the proposed cut of benefits proves their focus has shifted to other priorities.

“A lot of people I talked to are third or fourth generation employees, it's a family tradition, they've built up this company over generations,” Iversen said. “When you're saying cut off the pension for people hired after Nov. 1, that's not nameless, faceless people somewhere in the future to them. That's their kids. That's their grandkids.”

A union employee picketing outside the Davenport plant said that retired Deere workers have stopped by the Quad-Cities plants in solidarity with current workers. According to the employees, retired workers said Deere “deserves it for what they've done.”

Nationally, workers are re-examining their relationships with employers, according to Vachon, due to shifts in the labor market. Companies’ profits, and their CEOs’ compensation, have been steadily increasing since the '70s, while worker's salaries remain stagnant. While companies relied on cheap wages to increase profits, the onset of the labor shortage, which was created out of complications from the COVID-19 pandemic, increases union workers’ bargaining power since they are difficult to replace.

Although Deere’s high profits ensure that it can survive a strike, it will definitely lose the opportunity to bring in significant income during the strike, according to Vachon.

However, the length of a strike is always unpredictable, depending on how long the company will stand by its original offer, according to Iversen. If Deere starts to sense that it is missing out on too much profit, that might lead it back to negotiate new terms with the union. Iversen said it is likely that Deere will take a few days away from negotiations to plan its next step.

“They can certainly afford a better offer,” Iversen said.

For Deere workers on the picket line, the success of other unions in the country hasn’t gone unnoticed, according to the Milan worker. They hope to send a message, too.

“What we're going after is to send a message to all these companies out here that have been lagging behind, not wanting to pay their employees a fair living wage when they're raking in millions and billions of dollars, and paying all upper-corporation (members) all this money and throwing the scraps to the workers,” the worker said. “We want to put an end to that.”

On the picket line outside Davenport Works

Photos: A look back at previous Deere & Co. strikes

Matt DeLoose with UAW local 865 puts up a banner at the John Deere Harvester Works entrance at 13th Street and Morton Drive, East Moline, during picketing on Friday, Oct. 15. UAW members from New York, Michigan and Ohio, and local members of AFSCME, the American Federation of State, County and Municipal Employees, have been joining Deere's UAW workers on the picket line.

Strikers hold up UAW on strike signs as they waves to motorist in front of the John Deere Parts Distribution Center at the 78th avenue entrance on Friday in Milan.