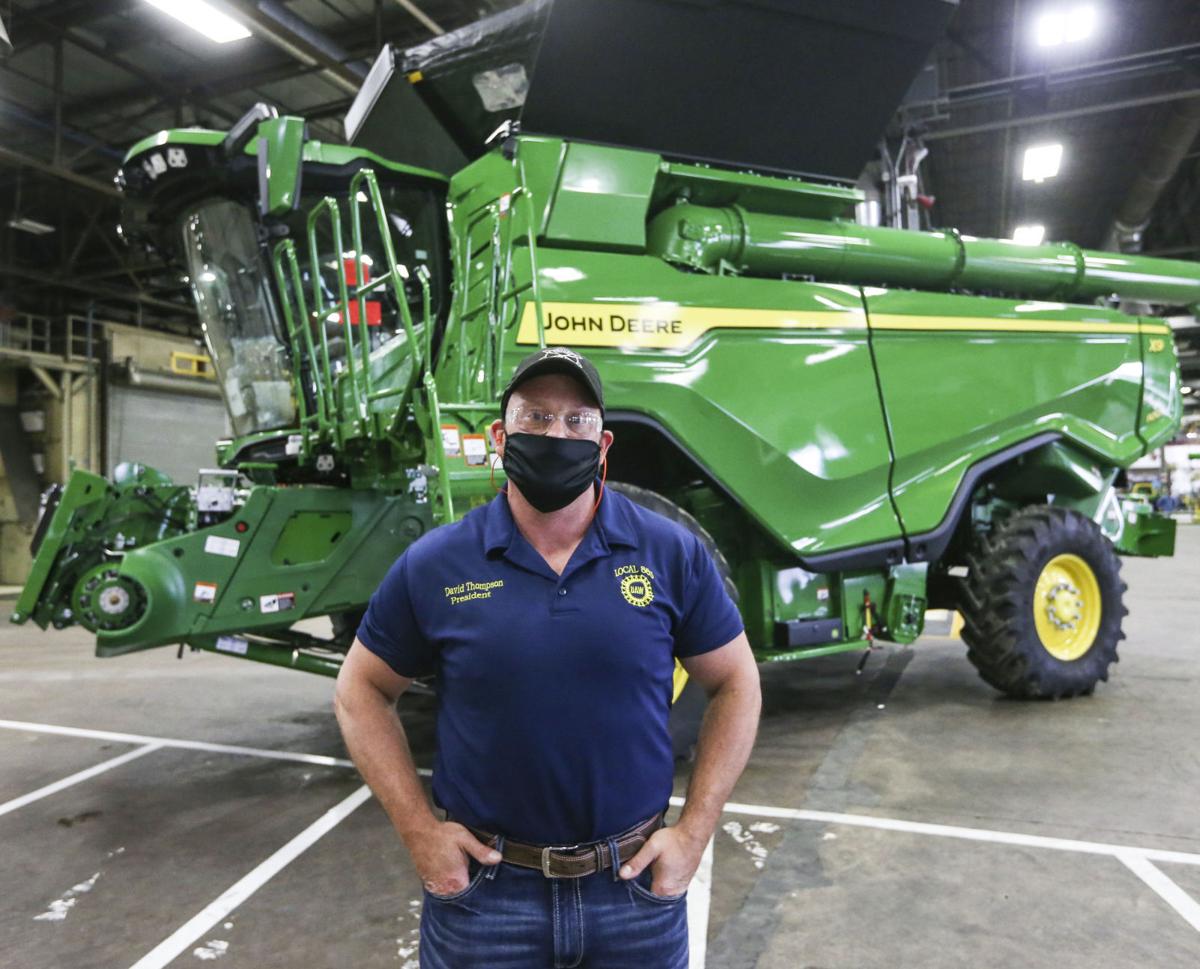 David Thompson the president of UAW Local 865 stands in front of the new X9 combine going down the assembly line at John Deere Harvester Works, in East Moline, April 8, 2021. 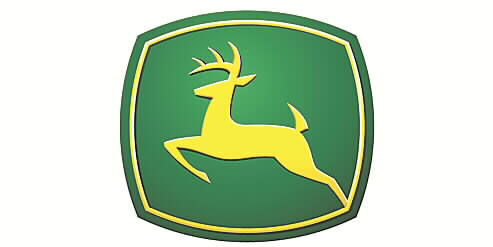 As John Deere union workers mull their first strike since 1986, some report dissatisfaction with working conditions and their union representation. They also say they feel they are empowered by the company's high profits and a national labor shortage.

After overwhelmingly voting down a contract Sunday night, United Automobile, Aerospace and Agricultural Implement Workers of America Union 281 said the bargaining committee was recalled Monday morning, and a hard strike deadline of 11:59 p.m. Wednesday was set. A strike-duty roster is in circulation.

Members of that union say they were already experiencing mandatory overtime, an increasing workload, and lack of support from managers. Then came a contract they found inadequate.

They voted down the contract because of low wage increases and decreasing retirement benefits, according to one Quad-Cities union worker, who spoke on the condition of anonymity, because of the fear of retribution.

The worker said working conditions have gone "downhill” since they started.

“Deere is not telling people what's really going on,” the worker said. “We want them to cough up and show that they care about the workers and that we're part of this family.”

At odds over contract details

The contract offered incremental wage increases over six years, equal to about a $1.20 raise in hourly pay at the end of the six-year contract, the employee said. Given the company's record profits, that raise wasn't acceptable.

“We were not being recognized as the contributor to that,” another union worker said. “I'd like to see the record profits, quarter after quarter, show some of the same love in which they show the shareholders.”

Office workers receive better treatment and more acknowledgement and appreciation for their work, while production workers are treated as “second-class citizens,” they said. Any past appreciation, like parties or gifts for exceptional employees, have disappeared.

Retirement plans were also cut back for new employees, the employee said.

Those hired before 1997 have a full pension and health care plan when they retire. Those who joined the company after 1997 have a smaller pension and a 401K, but no health care. Under the contract voted down Sunday, those hired on or after Nov. 1 would only have a 401K.

"Right now they're trying to get us to basically cut the throat of the next generation coming in behind us, where they won't even have the retirement which we have," the employee said. "And we're not happy with what we've got."

Retirement is essential because of the physical toll the jobs take on their bodies, according to union employees. They reported pressure from managers to produce 40% more tractors than previous generations of employees, and have been told they will be removed from the floor if they can’t keep up. Those with more than a decade of experience say they can feel it impacting their physical health. Workers are retiring earlier, around 60, because their bodies can’t take it anymore, according to the employees, which makes quality retirement benefits even more significant.

“The general attitude is get the parts out, and we don't care what the cost is, whether it's safety or anything else,” the first union worker said. “We can't imagine what our bodies are going to be like, we're going to be more than ready for retirement.”

“After weeks of negotiations, John Deere reached tentative agreements with the UAW that would have made the best wages and most comprehensive benefits in our industries significantly better for our employees,” Morris said.

A labor shortage changes the outlook

Union workers are dissatisfied with union representatives, citing a lack of firm advocacy for necessary benefits. One union worker said their local UAW chapter told them the results they wanted couldn't be achieved. Both employees thought the union should have called a strike after the first contract.

“We have the leverage on them for the first time in a long time,” the second union worker said. “We know that they're backed up on their assembly lines waiting for parts. Now is the time to put this company on notice that we're tired of this.”

There is a nationwide labor shortage, instigated by challenges brought on during the COVID-19 pandemic, and many corporations are raising wages and benefits to attract and retain employees. Dave Swenson, an economist at Iowa State University, said it is unusual that workers have bargaining power during a recession. Workers in the agricultural sector have an increased advantage, as the sector saw extraordinary gains due to an influx of government subsidies, Swenson said.

“In terms of the positions of strength, you could also argue that Deere cannot afford to pass up what looks like is going to be a very, very strong sales year,” Swenson said.

Swenson said if there is a strike, the local economies affected may experience a downturn because the striking workers won't have their full incomes. For Deere, production could be curtailed and that would have “a substantial impact on Deere's profitability over the next few quarters, if not the whole year.”

UAW workers make up about 10,000 workers at 14 facilities across the United States.

Both sides had reached a tentative agreement on a new six-year contract on Oct. 1. According to a Facebook post from UAW 281, which represents Davenport, 86% of workers rejected the company's offer. The agreement required 51% approval for ratification.

The current contract expired on Oct. 1, but a 14-day contract extension was approved overnight, allowing operations to continue as scheduled as negotiations went on.

Facilities impacted by the contract are Davenport Works, Des Moines Works, Dubuque Works, Ottumwa Works, and Waterloo Works in Iowa, including Tractor and Cab Assembly, Engine Works, and the Foundry. In Illinois, Harvester Works in East Moline, North American Parts Distribution Center in Milan and the Seeding Group and Cylinder Division in Moline are subject to the agreement.

The first union worker said a strike would force Deere to be accountable to its shareholders.

“They would (want) that equipment and iron to still roll out the door, making the dollars for John Deere and not take a loss on their investment,” the worker said.

David Thompson the president of UAW Local 865 stands in front of the new X9 combine going down the assembly line at John Deere Harvester Works, in East Moline, April 8, 2021.