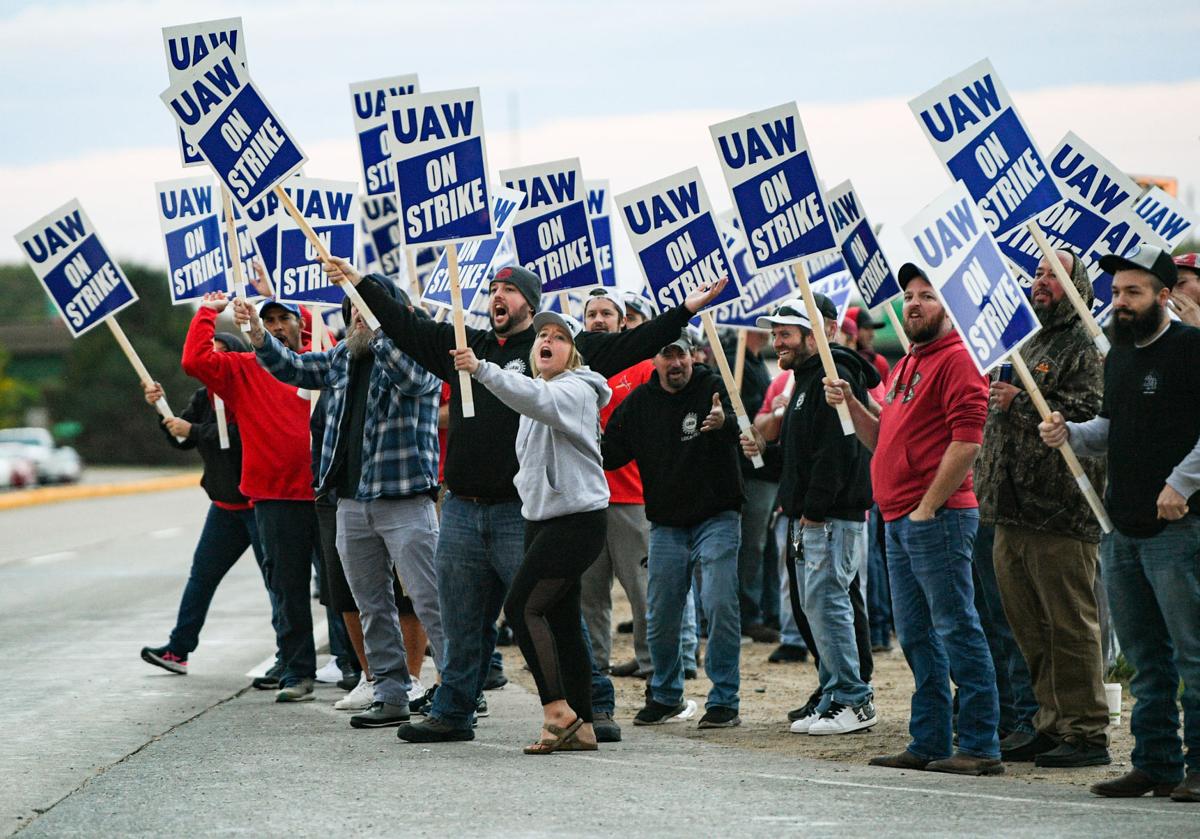 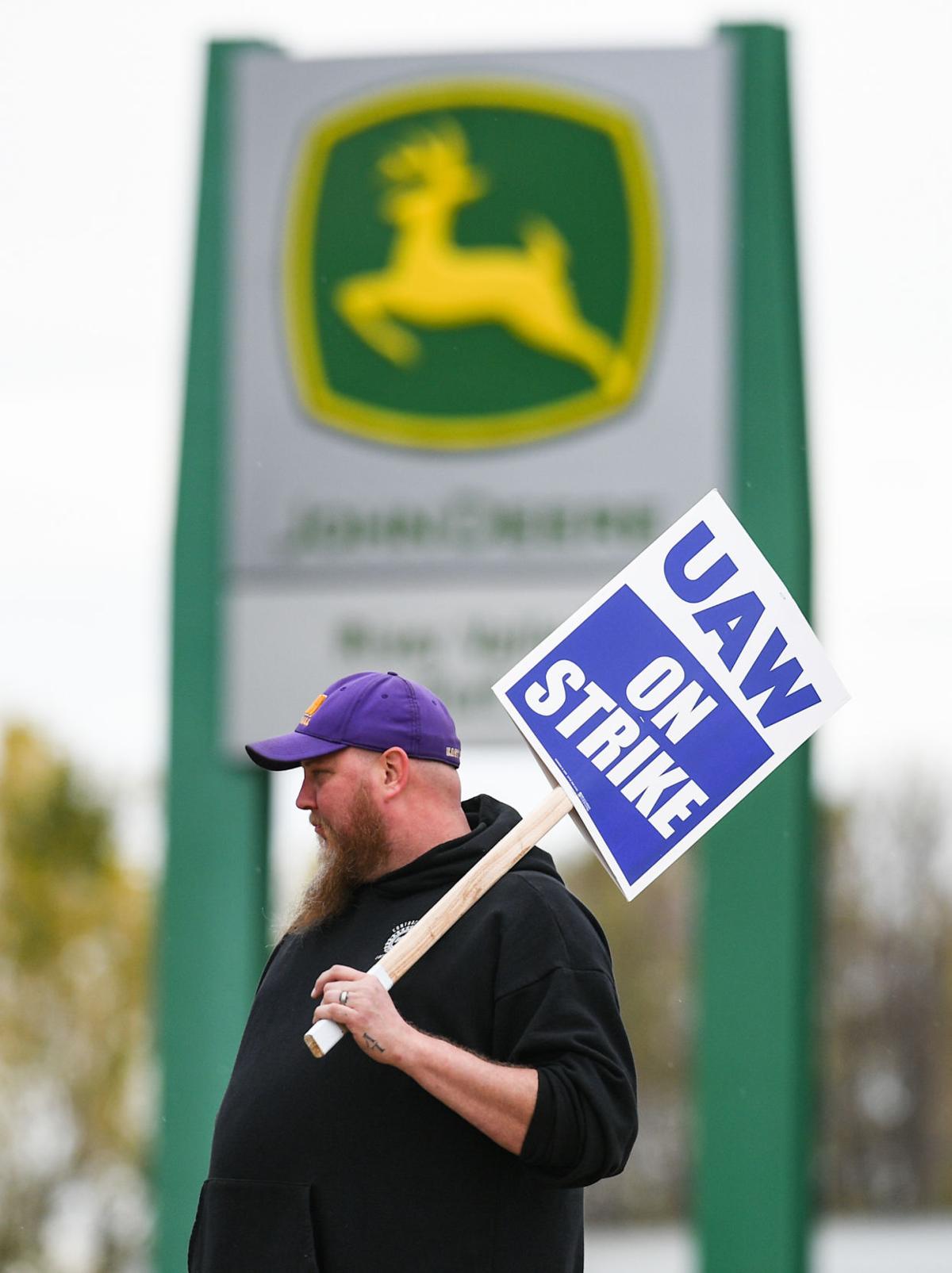 Mike Dahl woke up Thursday morning and headed to work at the John Deere Parts Distribution Plant in Milan. But he stopped at the entrance.

Dahl, and more than 20 of his union brothers and sisters in the United Automobile, Aerospace and Agricultural Implement Workers of America (UAW), joined a picket line formed at both entrances to the facility. Just before midnight, the union had called a strike in its quest for a contract with better wages and benefits. On a chilly, drizzly first morning, those on the picket line clustered around a barrel fire and pile of firewood to keep warm. Passing cars honked to express solidarity.

During his shift on the picket line, Dahl had to leave several times — he has a child in preschool to drop off and pick up. The lack of flexibility with his work schedule is hard on his family and one of his reasons for striking.

The picketers, joined by friends and family and retirees of Deere, held signs reading,“UAW on strike,” and, “UAW on strike for improved benefits."

Dahl said other local unions, radio stations and Quad-Cities organizations delivered food, water and clothing to the picket lines at Deere facilities across the Quad-Cities. The support from the community helped keep worker’s spirits high, he said.

Striking UAW workers also picketed outside plants in Moline, East Moline and Davenport. Union workers were instructed not to talk to the media.

Members of the UAW Local 281 took to the picket lines by the dozens after the union and Deere failed to reach an agreement by Thursday. After overwhelmingly voting down a contract Sunday night, the UAW recalled its bargaining committee, effectively ending negotiations, and set a hard strike deadline of 11:59 p.m. Wednesday.

The strike affects about 10,000 workers at factories in Illinois, Iowa and Kansas. Each Deere plant covered by the contract organized its own picket lines and plan to continue 24 hours a day, seven days a week until an agreement is reached, union leaders have said.

“This is obviously going to be a life adjustment,” Dahl said. “But I'll go on as long as I need to.”

The six-year offer from Deere would have raised wages by roughly 5% over the life of the contract. The deal also limited retirement benefits for workers hired after the contract was ratified. Deere workers have faced forced overtime and poor treatment from managers and other company leaders, multiple employees said on the condition of anonymity, fearing retribution. They said the last contract offer was unacceptable, especially considering the company’s record-high profits over the past year.

“What we're asking for is that it really wouldn't have taken very much for John Deere to have done it right,” said a union employee picketing outside Davenport Works, which makes construction and forestry equipment.

“Our members at John Deere strike for the ability to earn a decent living, retire with dignity and establish fair work rules,” Chuck Browning, vice president and director of the UAW’s Agricultural Implement Department said in a press release. “We stay committed to bargaining until our members' goals are achieved.”

In a statement, Brad Morris, Deere's vice president of labor relations, said the company is determined to reach an agreement with UAW “that would put every employee in a better economic position and continue to make them the highest-paid employees in the agriculture and construction industries.”

Another worker picketing at Milan said he had no interest in comparing Deere’s salary and benefits to other manufacturers. They said most other companies were not having record profits, nor did they produce as much as Deere.

“If you're wanting to come out and look like they were the shining star in all this, they would have come out and made an offer that was unbelievable to us and kept us working,” the worker said. “We never would have had to shut down.”

According to three union members, negotiations between Deere and UAW leaders have halted, with no indication of when they will resume.

"Our immediate concern is meeting the needs of our customers, who work in time-sensitive and critical industries such as agriculture and construction," the statement said.

Union workers said they heard rumblings from “disgruntled salary employees” who had been reassigned to that duty.

“We were told your old job is second fiddle. Your job will now be showing up at the factory,” said one salaried employee who spoke on the condition of anonymity because they are not authorized to speak to the media.

On the picket line, workers discussed how to remain financially stable if the strike continues for weeks, or even months. Strike pay will be available — according to UAW, weekly strike pay is $275 per week, or $55 per day, beginning on the eighth day. A bonus check is paid the week before the Thanksgiving and Christmas holidays.

One Milan worker said he was in a better position than most because he had a working spouse.

“I'm not too worried about it; we'll be fine. I don't know about others but I would like to see this get resolved quickly so we can go back to work,” the worker said. “But if I am on the other end of that scope, if it doesn't, then I'm prepared to do it.”

The impact depends on how long the strike continues. Deere stock closed at $329.65 on Thursday, up from $327.65 on Thursday morning, when Deere workers went on strike. Deere’s stock has dropped since Monday, after UAW members overwhelmingly voted down Deere’s contract offer. On Monday, Deere’s stock price was $343.02.

The Milan worker said union employees were ready for the “long haul.”

“We are standing out here, showing our display that we were willing to fight for what we feel we deserve,” the worker said.

“Hopefully, you know, they’ll work through the process and they’ll get the employees back to work sooner rather than later. I think it’s a great company that supports and appreciates its employees, and this is a process they go through. You know, especially with what we’re dealing with with workforce (issues) today … I have confidence that they’ll come to some resolution.” -- Iowa Gov. Kim Reynolds

“Union workers are the backbone of our economy and should always be treated with respect. That means earning a fair wage, having fair workplace rules and being able to retire with dignity.” -- Mike Halpin, Democratic candidate for the State Senate and State Representative for the 72nd District

"My father was a proud UAW member and took part in one of the longest strikes in the Quad Cities in 1979. I know firsthand the frustration and anger that working families experience when they see the company drawing in record profits and the CEO getting a major pay raise while they’re told to be grateful for the crumbs." -- Iowa Democratic Chair Ross Wilburn

What you should ask if retirement is just around the corner

What you should ask if retirement is just around the corner

The most important things about building credit

The most important things about building credit