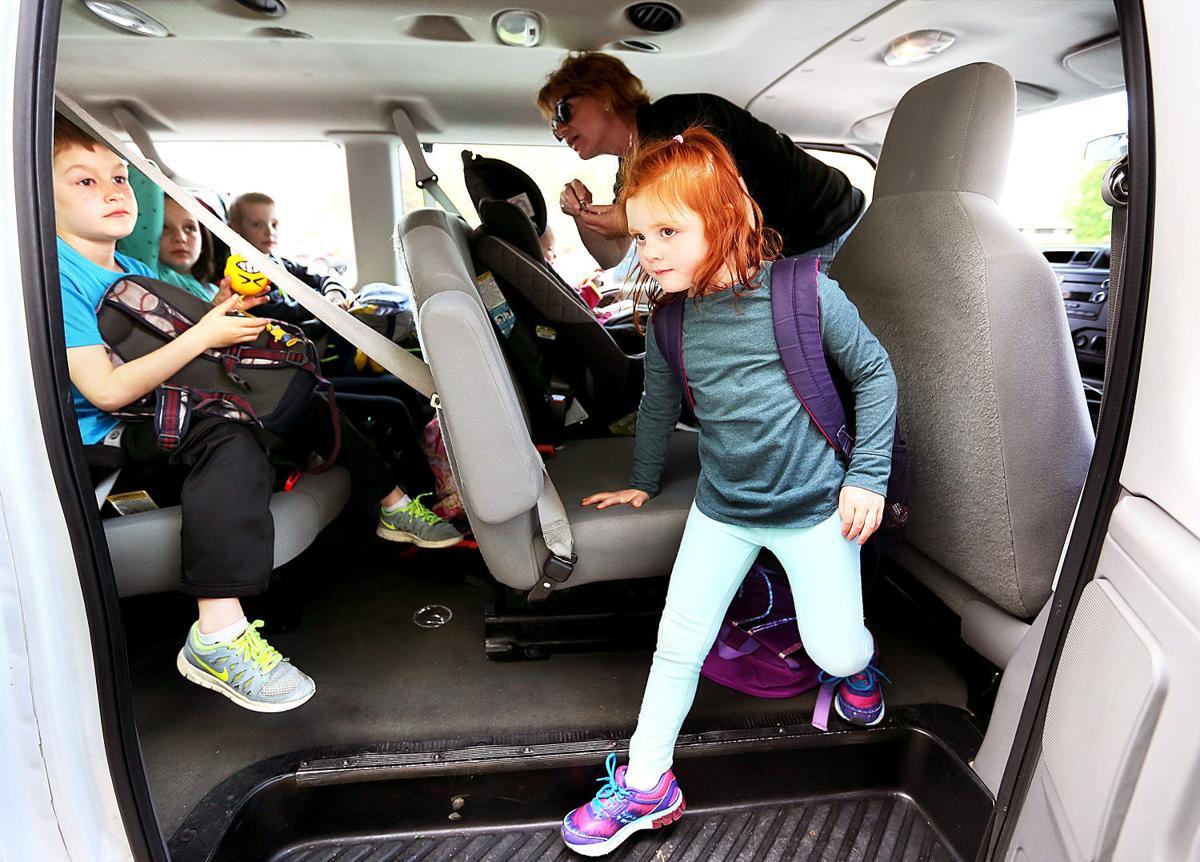 Katelyn Pitzer, 6, moves to an empty seat in the van as Heather Walker, co-owner of Tots2Teens, picks up several students from Our Savior Lutheran Preschool in Bettendorf. 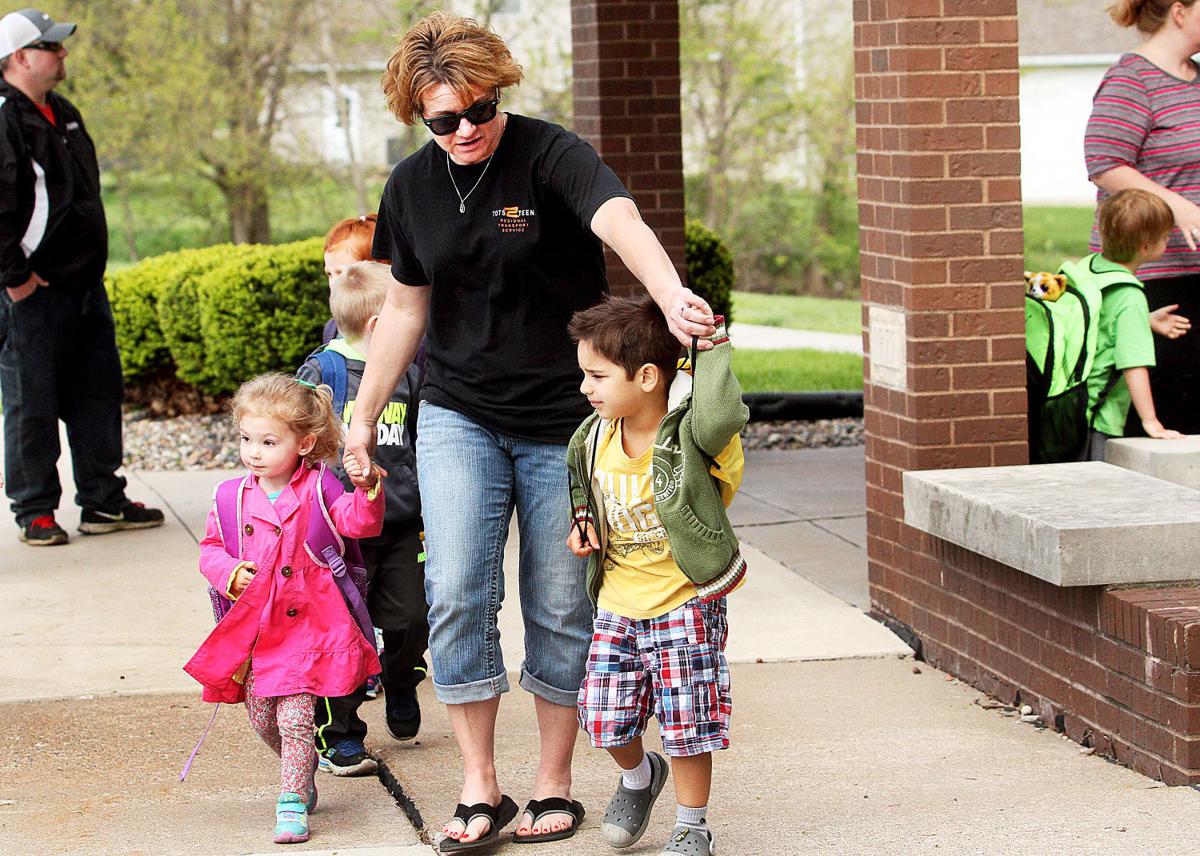 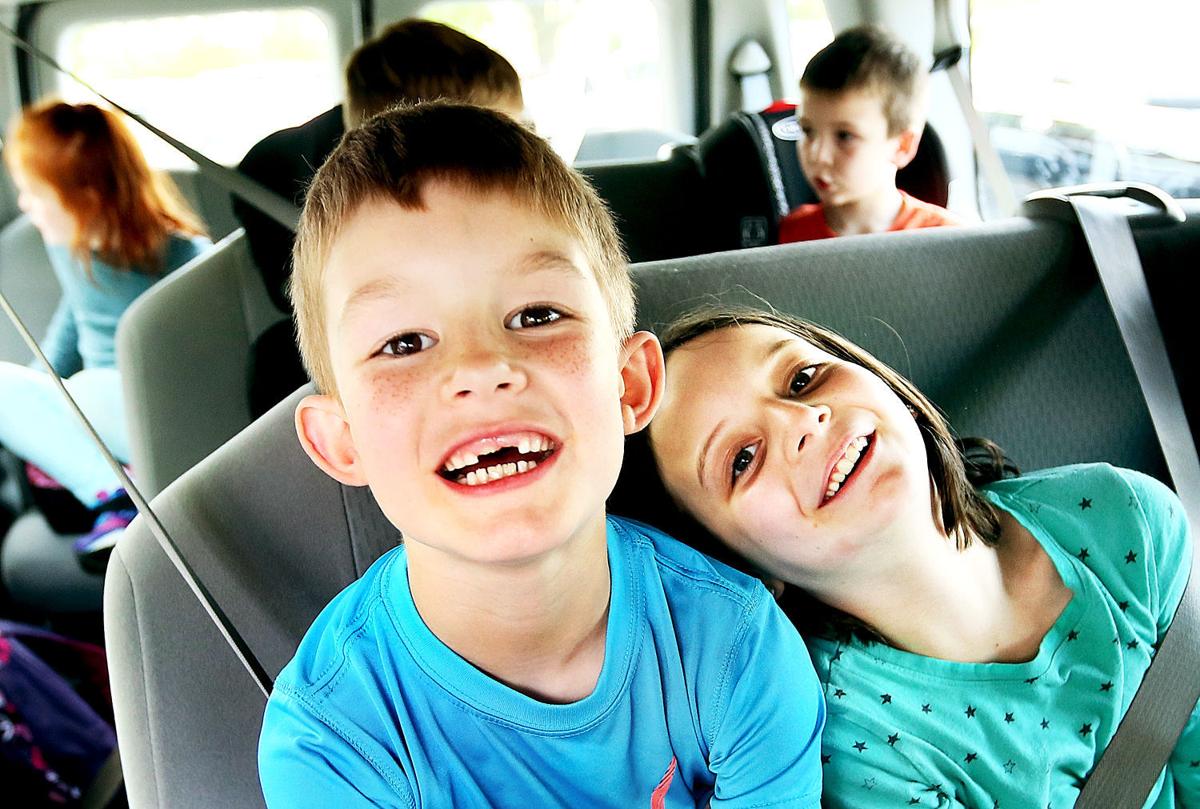 Ben Pitzer, 7, and Haleigh Strickland, 9, sit in Tots2Teens Transport's van after getting picked up from preschool to go to their day cares.

"Miss Heather!" the excited preschoolers yelp as soon as they walk out of Our Savior Lutheran Preschool to their awaiting ride.

''Oh, you finally lost that tooth," Heather Walker said as she helps four youngsters from the Bettendorf preschool climb in and get buckled into seatbelts and booster seats. Inside her shiny white van, the conversation quickly turns to favorite cookies — sugar and M&M.

Then the requests begin to turn volume up and then down on the Junie B. Jones book on CD blaring from the stereo.

It's all in a day's work for Walker, whose new startup Tots2Teens Transport is meeting a growing demand by working parents for child transportation.

"This is more fun than day care because what I'm hearing is the highlights of their day," she said. "I get to hear about the really good parts of their day."

Walker, the mother of two older sons, launched the child transportation service recognizing the dilemma facing busy parents: how to transport a child between school to day care or after-school activities in the middle of the workday.

"Most parents can't leave work," she said, adding that for day care providers, offering transportation creates a whole different set of concerns. "When I did day care, it was a nightmare. You have to pack up all the kids, maybe interrupt a nap or cut snack-time short. Most don't have the ability (to transport children)."

Tots2Teens Transport offers transportation for children ages 3-18, although Walker said the oldest child they transport now is 12. While she is busy picking up and dropping off children between schools, day cares and their homes between 7 a.m. to 4 p.m., "the crunch time" is after school, she said.

"Most of our parents are dropping kids off at school in the mornings themselves, but they are working when school gets out," she said. "We don't take as many to school as we pick up."

At a career crossroads when she was downsized by a national retailer, Walker launched Tots2Teens Transport in March 2015. By last summer, she began serving her first client — a day care provider — transporting the day care children to camp and summer school.

"At the beginning, I was an Uber driver when I had spare time ... it was fun and good practice," Walker said.

Now less than a year later, Tots2Teens has grown significantly with four vans and drivers, and it transports 43 children to 23 locations in Bettendorf, Davenport and Pleasant Valley.

"I was happy she was able to start this and to watch it grow," said Scott Neblung, her business partner/fiancee and now full-time driver. ''She kept saying, 'One of these months, I'm going to ask you to quit (his old job).'"

That day came after they got a third van. Today, they have four vans, including two 15-seat vans, a 12-seat van and a seven-seater. The couple also hired Neblung's 22-year-old daughter, Kelsi Neblung, as a full-time driver and Walker's sister, June Jones, as a part-time driver to fill in on the busy days.

Neblung, who left a retail management job to join Tots2Teens, added that they expected parents to have trust issues about allowing strangers to transport their children. To help them overcome it, he said, they meet with all the parents and, in some cases, the child care provider.

"Having the kids meeting you is the big thing," Walker said. "They don't want to just jump in a car with someone they don't know."

Parents also are provided references and resumes for Tots2Teens drivers and can inspect their fleet of vans.

While they offer to send text messages to the parents or child care provider when a child is picked up or dropped off, Walker said most clients ask for texts only on the first few rides. The Tots2Teens logo is displayed on their vans, which has raised awareness among parents who see them at the schools.

Neblung, who has bigger plans about growing the business than Walker envisions, projects they could grow to 10 vans within two years. First, he said they would want to maximize the areas they already pick up and deliver in, but he could see an expansion to Eldridge.

"But you want to grow at a manageable pace," he said.

The couple thought summertime might bring a slowdown, "but we're already getting calls from parents for rides to summer camp, sporting camps and Vacation Bible School,'' he said.

Drivers: All drivers have thorough background checks, history checks with the Department of Motor Vehicles, and extensive reference checks. They are fully insured and have chauffeur licenses. All drivers are CPR and first aid certified.

Aubrey Ratliff gets her 15-minute work breaks to herself since Tots2TeensTransport now transports her two daughters.

"I was driving 50 miles a day and would have to leave work two times a day," said Ratliff, who works registration for Genesis Medical Center in Davenport. On her morning break, she would get 5-year-old Layla from All Saints preschool to a relative's house. Then she would take a late lunch to haul McKenzee, 10, from Garfield Elementary to the sitter's.

"I have to get them to their great-grandma's, who watches our 2-year-old son, Beckham," Ratliff said. "Now they are all at one destination at the end of my day, thanks to Tots2Teens."

She didn't have to look far for help because Tots2Teens owner Heather Walker is her neighbor.

Emilee Bender of Davenport faced a similar problem working a 5 a.m. to 5 p.m. shift as a dialysis technician for the Quad-City Kidney Center in Bettendorf.

With her daughter, Elisyeh, 6, going into kindergarten last fall, she had trouble arranging transportation because her day care was not in Hayes Elementary's school boundary.

"To be honest, I don't know what I would do without Heather this year," Bender said. "She picks her up from day care in the morning and takes her to school." Tots2Teens then picks Elisyeh up after school and takes her back to day care.

"My daughter loves it," she said, adding, "Of course, she loves when I can pick her up from school."

When her daughter was in preschool, Bender worked at a car dealership in Bettendorf and used her lunch hour to pick up Elisyeh in west Davenport and take her to day care. "It's really saved me a lot of stress and time."

Watch now: Secretary of Transportation Buttigieg talks about the government response to gasoline shortage in 18 states

Corporate earnings season is the roughly six-week time period when the majority of U.S. companies release their financial results for the prio…

You'll Definitely Regret Delaying Social Security Until 70 If This Happens

Don't end up wishing you'd made a different choice.

Real estate transactions for Sunday, May 9, 2021

Facing a staffing shortage, Quad-Cities restaurants are reducing hours, raising pay and menu prices. 'I have the best staff I've ever had. You can't just burn them out. They deserve better,' says one owner.

At the Steel Plow restaurants in Moline and Davenport, Sunday dinner and all Monday hours were eliminated — not enough kitchen and wait staff to cover the shifts. Across the Quad-Cities, restaurants are having the same problem with staffing shortages.

MARK-TO-MARKET: What’s behind the rise in gas prices?

The U.S. Energy Information Administration (EIA) defines the summer driving season as April through September. The season formally kicks into …

Get the most out of your Social Security payments by doing these two things.

Real estate transactions for Sunday, May 2, 2021

5 Moves to Ensure You're a Retirement Multimillionaire

It's possible to retire a multimillionaire, but you'll need a strategy.

Katelyn Pitzer, 6, moves to an empty seat in the van as Heather Walker, co-owner of Tots2Teens, picks up several students from Our Savior Lutheran Preschool in Bettendorf.

Ben Pitzer, 7, and Haleigh Strickland, 9, sit in Tots2Teens Transport's van after getting picked up from preschool to go to their day cares. 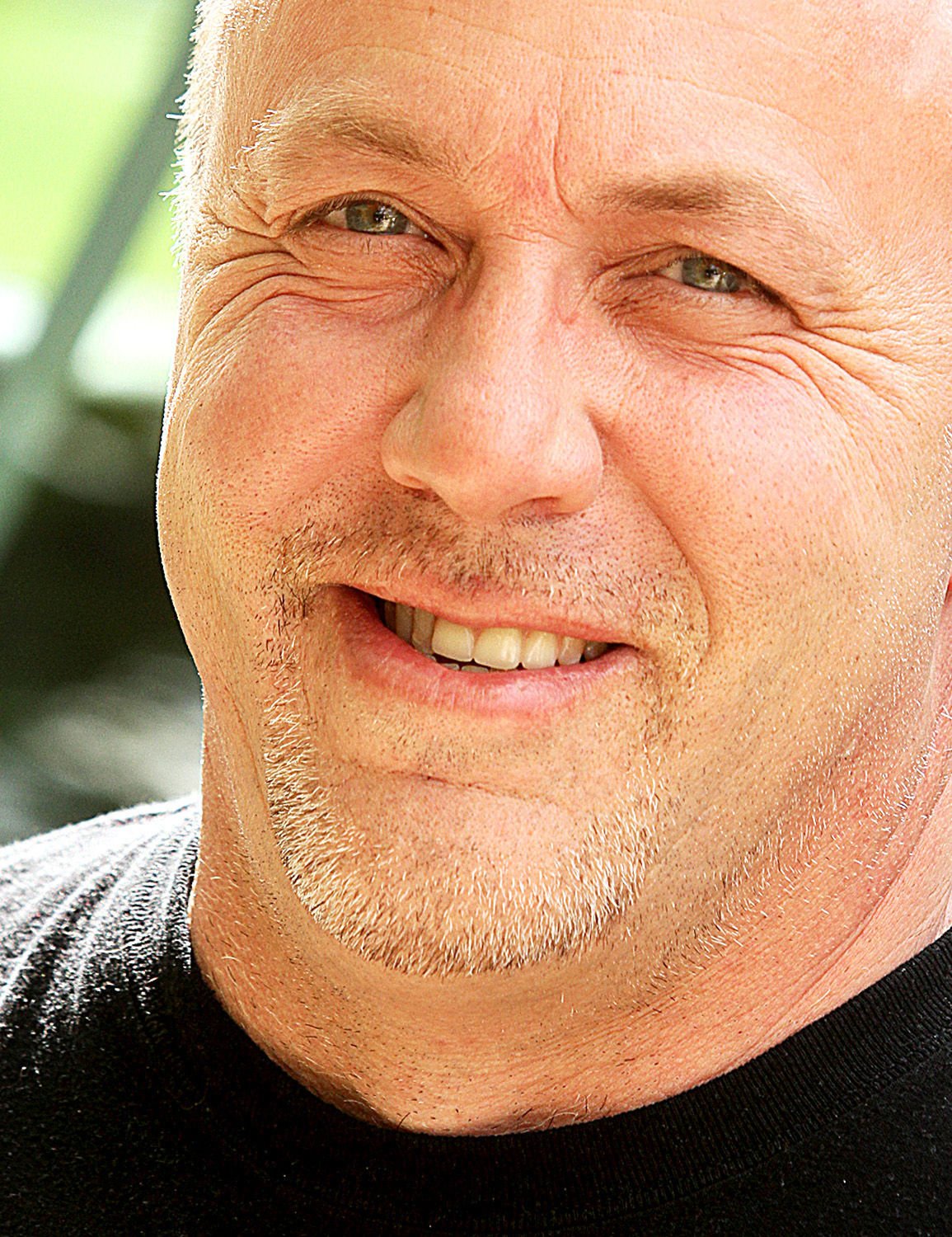