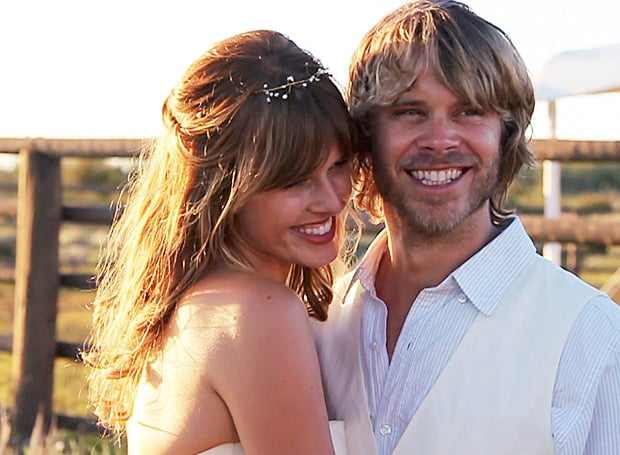 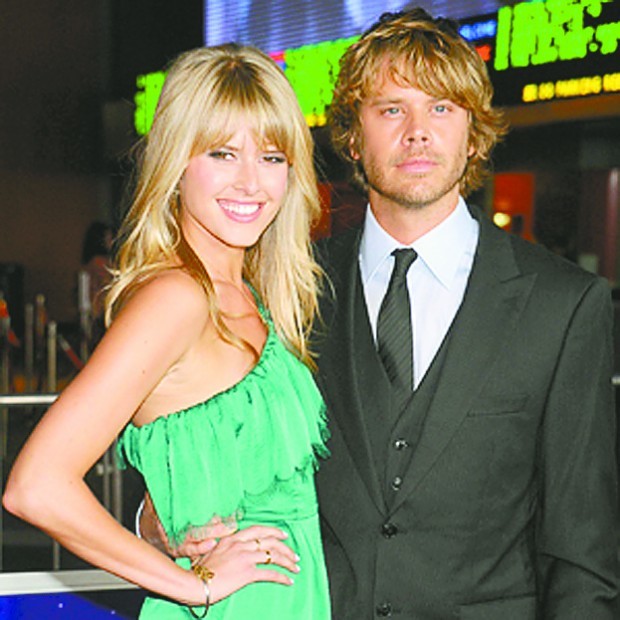 And guests to “NCIS: Los Angeles” star Eric Christian Olsen’s wedding to actress Sarah Wright got a taste of the Quad-Cites at the reception Saturday night in Tetonia, Idaho.

Olsen, who spent much of his life in Bettendorf, ordered 27 dips of four Whitey’s flavors, including Moose Tracks and Mint Chocolate Chip. White Tiger Paws is Oreo cookie chunks and fudge in a vanilla ice cream; Graham Central Station has graham cracker chunks in a similarly flavored ice cream.

Tunberg said putting individual scoops of ice cream in plastic bowls and shipping them worked better than sending larger containers. The FedEx shipment was 112 pounds, including dry ice to keep the ice cream chilled. Tunberg, who attended the wedding, said the ice cream was cold and hard by the time it was scheduled to be served as the dessert to a meal that included barbecued brisket and fish tacos.

That came after a ceremony Tunberg called “the most unique wedding I’ve ever been to.”

It took place outdoors at the farm that Olsen; his parents, Paul and Jeanne; and brother, David, own along the Teton Mountains and across from Jackson Hole, Wyo. — a “splendid background,” Tunberg said.

“They cut the grass up on a knoll and the bridesmaids and the groomsmen proceeded from the barn at least 100, 150 yards to where the ceremony was,” he said. “It was a long wedding aisle.”

Paul Olsen, a longtime Augustana College track and field coach and English professor, as well as an ordained minister, officiated at the ceremony.

After the wedding, guests were ushered through the barn and into a horse corral covered with a tent for the reception. David Olsen, a stunt double and his brother’s best man, showed a video compilation of those who could not attend the reception wishing the couple well, including LL Cool J from “NCIS: LA” and Mark Harmon from “NCIS.” Two of Olsen’s “NCIS: LA” costars, Barrett Foa and Renée Felice Smith, were in attendance, as was actor Joel Edgerton, the co-star of the movie “The Thing” and who plays Tom Buchanan in “The Great Gatsby” movie remake due out at Christmas.

Guests danced until at least 11 p.m. to music from a bluegrass band, Tunberg said.

Olsen, 35, met Kentucky native Wright, 28, in 2006 when they were both cast in the short-lived Fox TV sitcom “The Loop.” Her credits include “Made of Honor” and “House Bunny,” as well as the upcoming “Celeste and Jesse Forever.”

Tunberg and his wife, Sue, were relaxing days after the wedding and still in the mountains. Sue’s sister, Jeanne Olsen, is a chaplain for Genesis Health System in the Quad-Cities.

“It’s just clear as a bell out here, very beautiful. I don’t think it could have gone any better,” Tunberg said of Idaho and the wedding.

Quad-City jobs increase by over 2,000 from May to June

Since the start of the global pandemic, the SARS-CoV-2 virus — which causes COVID-19 — has gone through a number of mutations. Fortunately, mo…

Paul Rumler, president & CEO of the Quad Cities Chamber, has been designated as a Certified Chamber Executive (CCE) by the Association of …

Lee Enterprises and Amazon Advertising are working together to provide Over The Top (OTT) video services, according to an announcement from th…

3 Social Security Factors You May Be Forgetting

It's easy to overlook these crucial Social Security facts.

This Social Security Strategy Is Great for Couples

Staggering your benefit claims could be a great way to get the best of both worlds.