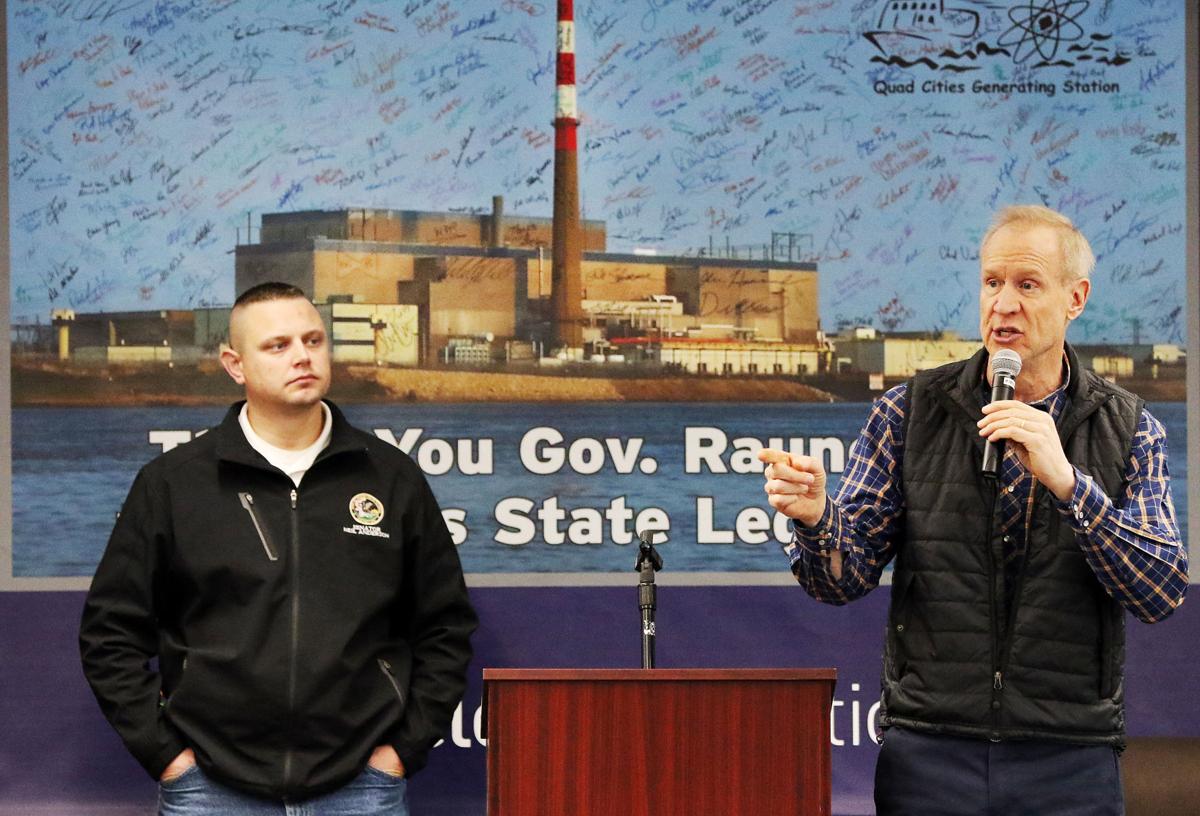 Illinois State Sen. Neil Anderson, R-Rock Island, left listens as Gov. Bruce Rauner talks during a town hall style meeting at the Exelon Quad-Cities Generating Station Cordova on Tuesday. It has been a year since Rauner signed a bill that kept the plants in Cordova and Clinton open. 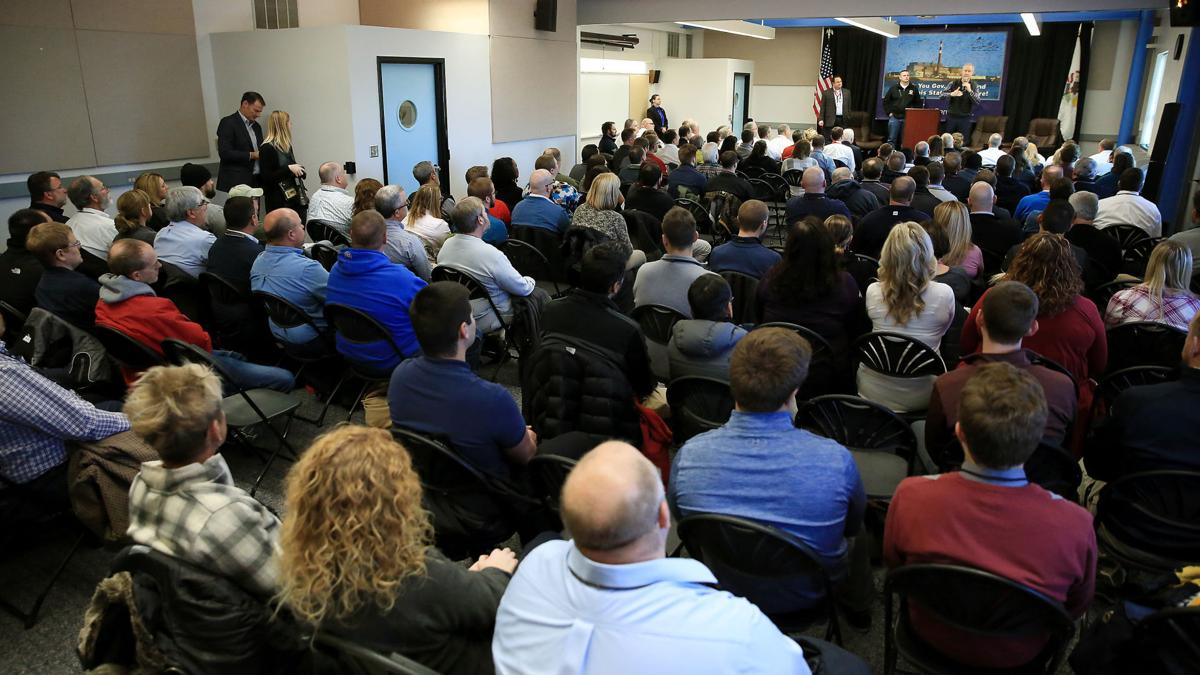 Illinois Gov. Bruce Rauner talks about the benefits of keeping the Exelon nuclear power plants open during a visit to the Cordova plant Tuesday. 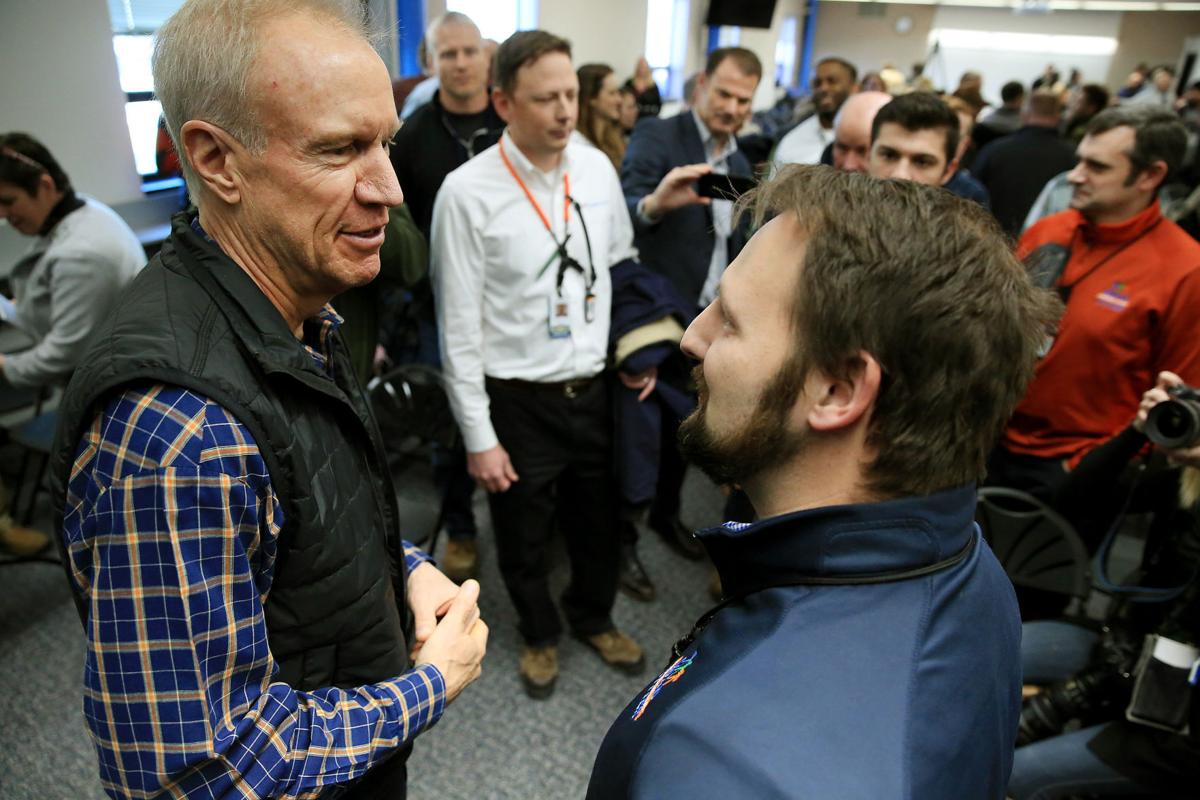 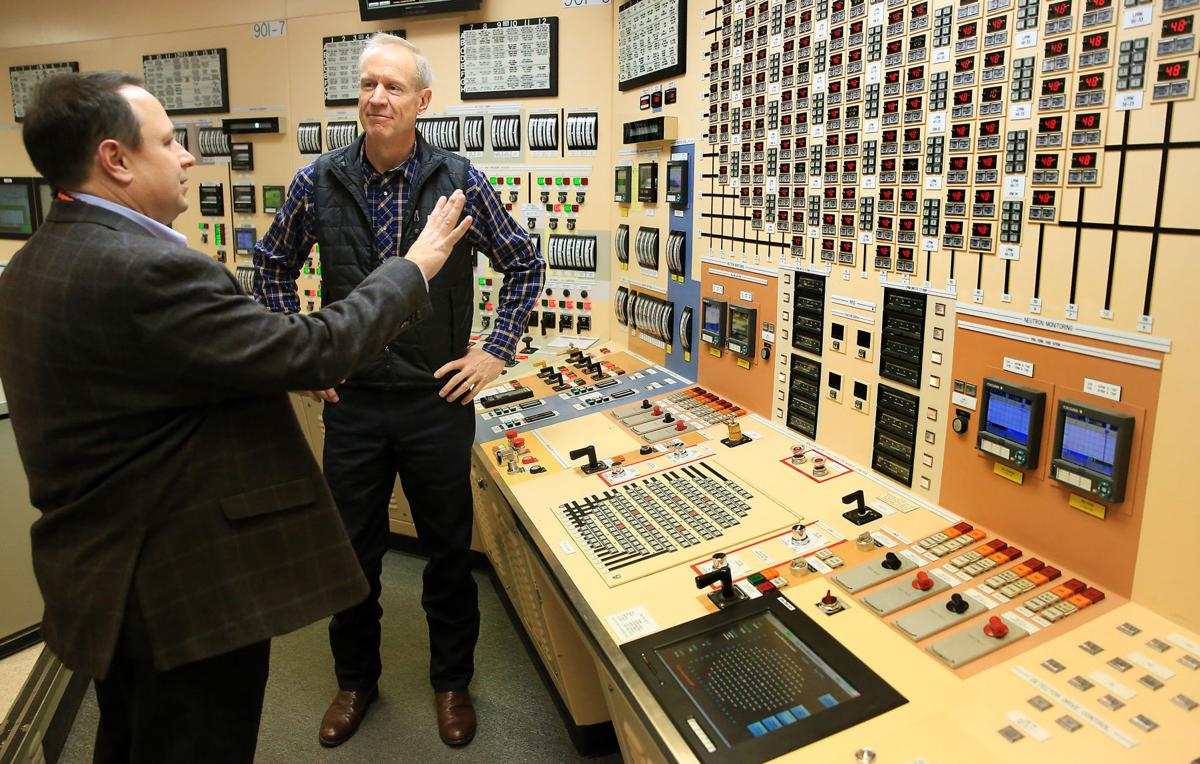 CORDOVA, Illinois — A year ago, the future of two Exelon Nuclear plants in the Quad-Cities area were in question.

On Tuesday, a year after his signature saved the plants in Cordova and Clinton from early closure, Illinois Gov. Bruce Rauner told Exelon Quad-Cities Station employees their energy generation will put Illinois on a path to job growth and prosperity.

For the Exelon employees, Rauner's visit was a chance to again celebrate the legislative win that secured their jobs. Exelon had threatened to close both plants within two years if the legislation, called the Future Energy Jobs Act, did not pass.

"If it wasn't for him, I wouldn't be here today," said Heather King, of Hampton, who snapped one of the first cell phone photos with him after his speech. She was hired as a custodian at the plant the day after the bill was signed last year.

Her co-worker Kathy Halsted, of Cambridge, Illinois, has 7½ years at the plant and remembers too well the stress level felt by the employees ahead of the bill's passage. "Nobody knew if they were going to have a job. It was difficult times. I glad it stayed open."

For Training Director Ed Pannell, who will oversee the expanded Professional Learning Center facility now under construction, the developments of the past year "are exciting." "We're investing $6 million just in this building," he said.

"This bill lays the foundation for thousands, tens of thousands, of more jobs in Illinois," he told the Exelon workers Tuesday.

According to the governor, the new law not only creates jobs in nuclear generation and across the energy sector but will make the state of Illinois more competitive in attracting new manufacturing jobs. "I want to make sure we create all energy options and protect them in the state of Illinois," he said.

Earlier this month at a reception in Chicago, Rauner said the clean energy act will allow Illinois to "compete head-to-head with any state in the nation to attract clean-energy investment and clean-energy jobs." Speaking to business leaders at the Environmental Entrepreneurs and Clean Energy Trust event, he said Illinois now is in line for $180 million in new investment in renewable resources because of the law's passage.

At Exelon, where his message met an appreciative crowd, he said the legislation already has led to the hiring of 400 new Exelon employees at Quad-Cities and Clinton (100 at Quad-Cities).

In addition, the plant is employing hundreds of construction workers who are advancing $20 million in construction projects, including the expansion of the Professional Learning Center, said Exelon Site Vice President Kenneth Ohr.

"We need competitive energy costs and we need to attract more companies, more business, from around the world to locate in Illinois and you allow that to happen...," Rauner told the workers.

After the town hall meeting, Rauner toured the plant's simulation room speaking with reporters about the law's benefits. In addition to protecting "good-paying jobs here in the Quad-Cities," he said it will lead thousands of new jobs in energy including energy efficiency and innovation.

In addition, the law keeps energy costs low "so we can keep the cost of living low for our families and businesses that want to grow here," he added.

Ohr spoke of the three-year journey, during which employees wrote letters, led social media campaigns and filled buses to travel to Springfield to have their voice heard. He recalled how Sen. Anderson was one of the early supporters in what became a bi-partisan effort. "This wasn't about politics. This was about a good business. This was about a clean environment," Ohr said.

Anderson said it was an issue that united the Quad-City community. "I think we need to celebrate the fact that public-private partnerships, unions, businesses coming together was a big deal and also the community coming together. That's how this thing got done," he said.

But the event comes as Rauner's support of the bill is receiving criticism from the Republican set to challenge him in next year's primary. Illinois Rep. Jeanne Ives, R-Wheaton, who recently filed nomination papers, had opposed the energy bill with its subsidies for Exelon.

In an interview last month with the Quad-City Times, she said the state's residents are unfairly subsidizing energy going out of state. She also questioned whether Exelon actually would have closed the plants had the law not passed.

The Rock Island County Board is scheduled to vote on a series of measures related to its fiscal year 2018 budget tonight. Included would be a …

Officials: Exelon project will aid trades and the community

Advice from Exelon Q-C Station: "Pull together as a team"

Illinois State Sen. Neil Anderson, R-Rock Island, left listens as Gov. Bruce Rauner talks during a town hall style meeting at the Exelon Quad-Cities Generating Station Cordova on Tuesday. It has been a year since Rauner signed a bill that kept the plants in Cordova and Clinton open.

Illinois Gov. Bruce Rauner talks about the benefits of keeping the Exelon nuclear power plants open during a visit to the Cordova plant Tuesday.