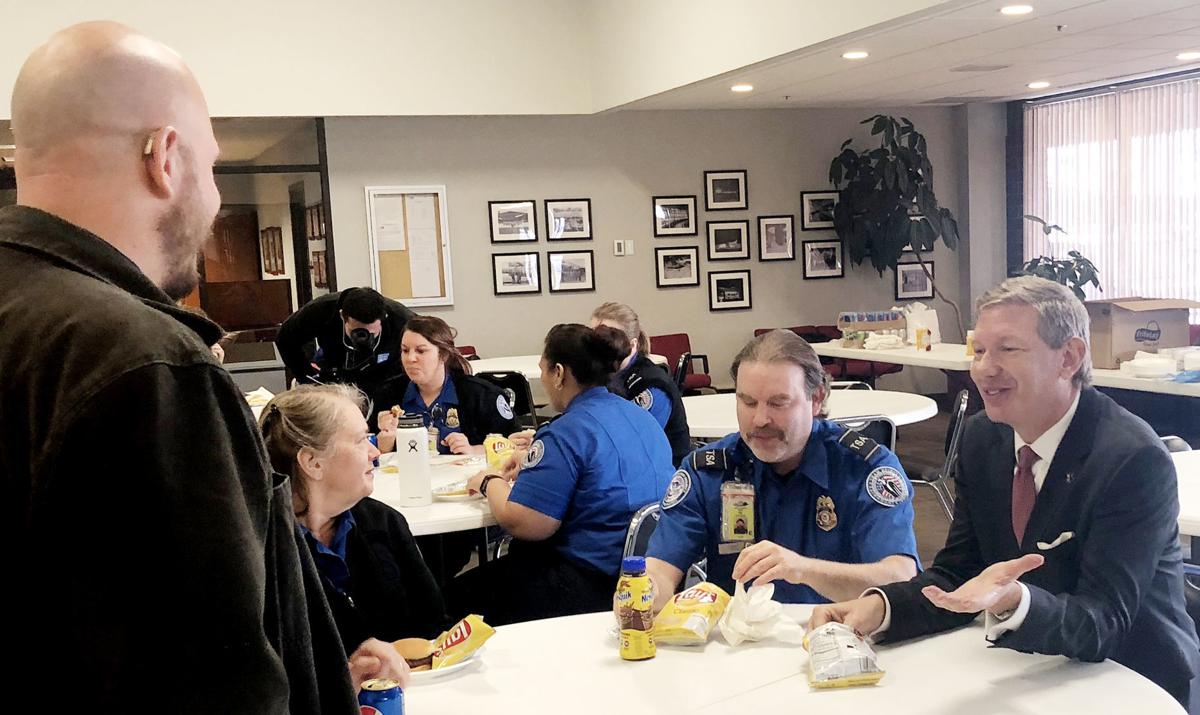 Quad-Cities River Bandits owner Dave Heller, right, eats with TSA officers at the Quad-City International Airport Friday morning. The River Bandits bought the federal employees lunch as a sign of support as they work without pay during the partial government shutdown. 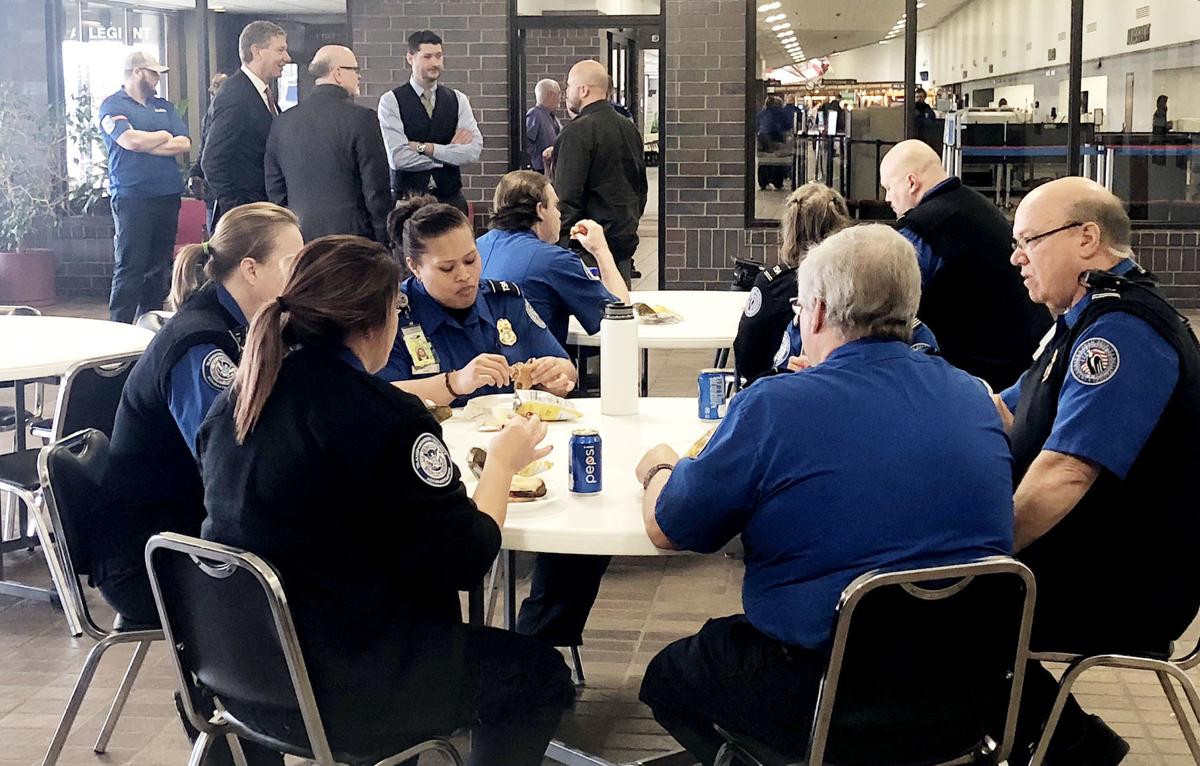 The River Bandits bought TSA officers at the Quad-City International Airport a meal as a sign of support as they work without pay during the partial government shutdown.

To show support for Transportation Security Administration officers facing their first payday without a check due to the government shutdown, the Quad-Cities River Bandits bought the federal employees a meal on Friday.

The 54 TSA officers at the Quad-City International Airport would typically receive their paychecks on Monday, said Jeffrey Hardacre, Assistant Federal Security Director for Downstate Illinois. But due to the three-week partial government shutdown, the employees have been told to continue working without pay.

River Bandits Owner Dave Heller said bringing his staff together to purchase food and grill burgers on Friday was one way to show support.

"They're working so hard without pay to keep us safe and help us enjoy our freedom. And we just want to say 'thank you,'" Heller said. "We appreciate their hard work. We really do. They're caught in the middle of a terrible thing right now with the shutdown. And without taking political sides, we just want to let them know we appreciate what they're doing."

TSA officers are among the 800,000 federal employees working without pay during the partial government impasse, which is close to breaking the record for the longest government shutdown.

Heller said his team worked quickly to pull together the meal.

"It wasn't planned long in advance because I don't think anybody expected the shutdown to happen or go on as long as it's gone on," he said.

At airports across the country, some TSA officers have called in sick in masses, the agency said in a tweet. But in Moline, Executive Director Ben Leischner said there has been no uptick in sick days, and everyone is continuing to do the work they are normally paid for.

As the River Bandits owner talked and ate with TSA officers Friday, Leischner said he is grateful to have federal employees dedicated to their jobs, plus the support of the community.

"I think it's really neat to see community leaders wanting to help other members of the community, like the TSA," he said. "And it's exciting to see the sense of community around this. It's gestures like this that go a long way with workers currently dealing with a challenging time. We all hope this gets resolved quickly, but it's awesome to see people do what they can to help."

The partial shutdown would set a record early Saturday, lasting longer than the 21-day closure that ended Jan 6, 1996.

President Donald Trump on Friday tamped down expectations that he is close to declaring a national emergency to get $5.6 billion to help pay for a border wall.

The Associated Press contributed to this report.

The Rock Island Arsenal Joint Manufacturing and Technology Center is releasing 111 of its 174 term employees from now through October.

Starting a business is tough and risky. It's even harder for Black women in the Quad-Cities.

What does the future hold for NorthPark Mall? Davenport officials are studying zoning changes to aid revitalization.

Davenport plans to create a new zoning district to aid revitalization of NorthPark Mall and adjacent property. The district could include multi-family residential and retail areas, office space, restaurants, entertainment and green space.

RIVERSIDE, Iowa — Mo Hyder, general manager of Rhythm City Casino in Davenport since 2014, has been appointed a regional vice president for El…

BIZ BYTES: Hy-Vee is looking for the "Best of Local Brands"

Hy-Vee, Inc. is looking for a few good local brands.

After months of managing operations while short-staffed, Beth Lagomarcino, co-owner of Lagomarcino’s, and her business partners decided someth…

Quad-Cities River Bandits owner Dave Heller, right, eats with TSA officers at the Quad-City International Airport Friday morning. The River Bandits bought the federal employees lunch as a sign of support as they work without pay during the partial government shutdown.

The River Bandits bought TSA officers at the Quad-City International Airport a meal as a sign of support as they work without pay during the partial government shutdown.