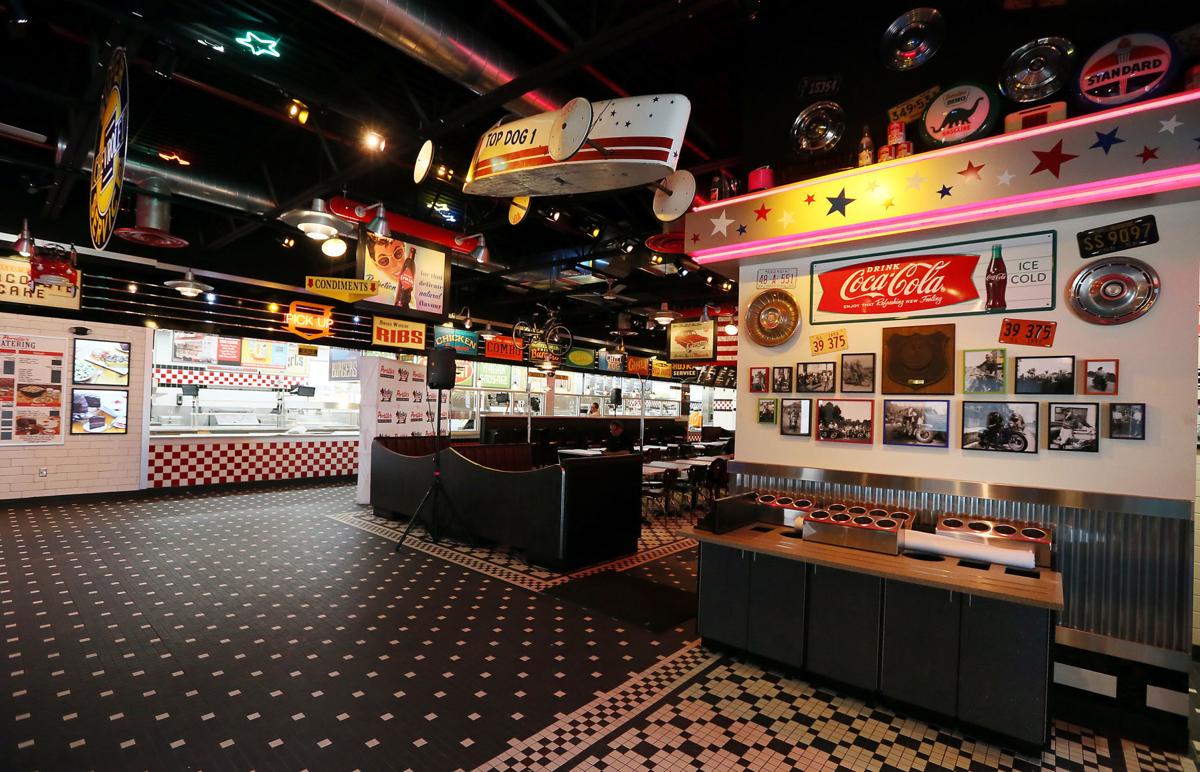 A look just inside the main entrance to the new Portillo’s located on 53rd Street across from Costco in Davenport. 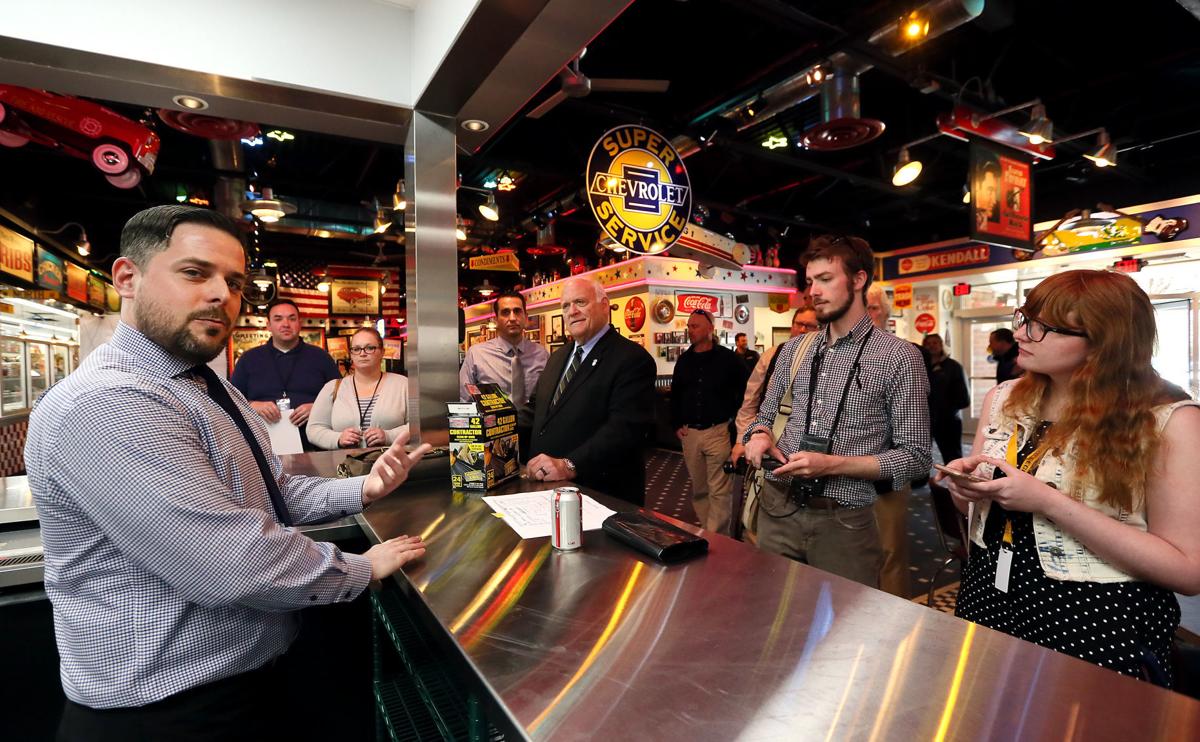 Portillo’s Director of New Restaurant Openings, Jeff Deppe, left talks about the catering side of the new restaurant business located on 53rd Street to members of the media Tuesday.

Walking inside Davenport's long-awaited Portillo's restaurant is like stepping into a 1950s diner, complete with black and white tile and posters of James Dean and Little Richard.

Adam Brown, who's managing the construction project on 53rd Street, said the 9,000-square-foot restaurant also is filled with iconic Quad-City and Iowa trademarks.

"The look of each restaurant depends a lot on the specific region we are in, so there's a lot of different things in this one related to the Quad-Cities," Brown said. "So it's a bit of a scavenger hunt to find the hidden things related to Deere & Co., the Iowa State Fair and more."

The Davenport spot, across the street from Costco Wholesale, will be the first Portillo's restaurant in Iowa. Founded as a hot dog stand in Villa Park, Illinois, by Dick Portillo in 1963, the new restaurant — expected to open in June — will be the company's 60th location.

At a preview event for members of the media Tuesday morning, Davenport Mayor Frank Klipsch touted the city's accomplishments bringing both Costco and Portillo's to the region. Both businesses were requested by residents when he first took office, he said.

The mayor also boasted the economic impact the Chicago-style hot dog and Italian beef restaurant chain will have on the Quad-Cities, as managers plan to fill up to 250 jobs.

In the first week accepting applications, Jeff Deppe, director of new restaurant operations, said around 600 people have shown interest in working for Portillo's. So far, the restaurant has hired around 50 workers. Pay ranges from $10 to $14 per hour.

"The application flow has been off the charts so far," Deppe said. "The community has really come out and embraced us."

Deppe took questions from the media, surrounded by recognizable Chicago street signs, vintage advertisements and a large 1960s-era photograph of the first Portillo's hot dog stand. A replica of the stand, called "The Dog House," also sits in the parking lot.

He said strong support from Quad-City hot dog and chocolate cake lovers —especially shown through posts on a Facebook page called "Bring Portillo’s to the Quad-Cities" — helped bring the restaurant to Davenport.

"There's been a lot of hype around bringing us out here," he said. "That's why we look at places like this, because that brand recognition is really important. It's been fantastic."

Deppe said the project is nearing the finish line, with painting, landscaping and some concrete work left to be done.

Developer William Torchia, who brought Portillo's to Peoria, said work will continue on the land surrounding the restaurant, at 2741 E. 53rd St., where nine homes were demolished last year. In the coming month, he said crews will break ground for the fast-food chain Raising Cane's Chicken Fingers, which will open next door.

First Midwest Bank will build a branch location on the other side of Portillo's, he said. And, Torchia is still seeking two other tenants to complete the five-lot development.

A few dozen neighboring Davenport residents still have a beef with the developers and the city, arguing the new businesses will increase traffic and flooding problems in the residential area south of 53rd Street.

A handful of those neighbors in September filed a lawsuit against the city concerning the re-zoning process the Portillo's developer underwent. The city has denied claims that staffers made errors during the process and failed to notify affected residents. A trial is set for July.

In hopes of alleviating heavy traffic, Community Planning and Economic Development Director Bruce Berger said the city is moving forward with plans to widen 53rd Street. He said the city is in "as good of shape as it can be" considering several major construction projects along the corridor.

Brown addressed flooding concerns, claiming any run-off caused by the development will remain on the Portillo's site. Developers are installing two stormwater detention containers underground that will collect up to 650,000 gallons and filter the water before it's released in the nearby creek.

"The neighbors shouldn't see any run-off unless there's a 100-year flood, and then everywhere will be flooded," Brown said.

Torchia said he's been monitoring the tanks in the past weeks to see the rate at which water is flowing into the creek.

"It's been at the top of my mind," he said. "There are two places where water will release into the creek, so we're watching to see how that moves along. There will always be some movement of water toward the creek. Like the neighbors said before, 'We'll wait and see.'"

After a tour, which included a sneak peek inside the kitchen and catering area, Portillo's managers provided a lunch of Italian beef sandwiches, chopped salad and chocolate cake. In June, Quad-Citians will have their first chance at sampling the menu, which also features cake shakes, burgers and cheese fries.

During soft opening, Portillo's official says 'Davenport has come out in full force'

Even before the official opening, Jeff Deppe, director of new restaurant operations, said Portillo’s is expecting record sales at its new Dave…

DAVENPORT — Even before the official opening of the new Portillo's' restaurant at 2741 E. 53rd St., Jeff Deppe, director of new restaurant ope…

After months of anticipation for hot dog and Italian beef fans, Portillo's has set the official opening date of June 13 for its new restaurant…

Ahead of its grand opening in Davenport on June 13, Portillo's partnered and raised money with the Quad-Cities Community Foundation and River …

A look just inside the main entrance to the new Portillo’s located on 53rd Street across from Costco in Davenport.

Portillo’s Director of New Restaurant Openings, Jeff Deppe, left talks about the catering side of the new restaurant business located on 53rd Street to members of the media Tuesday.