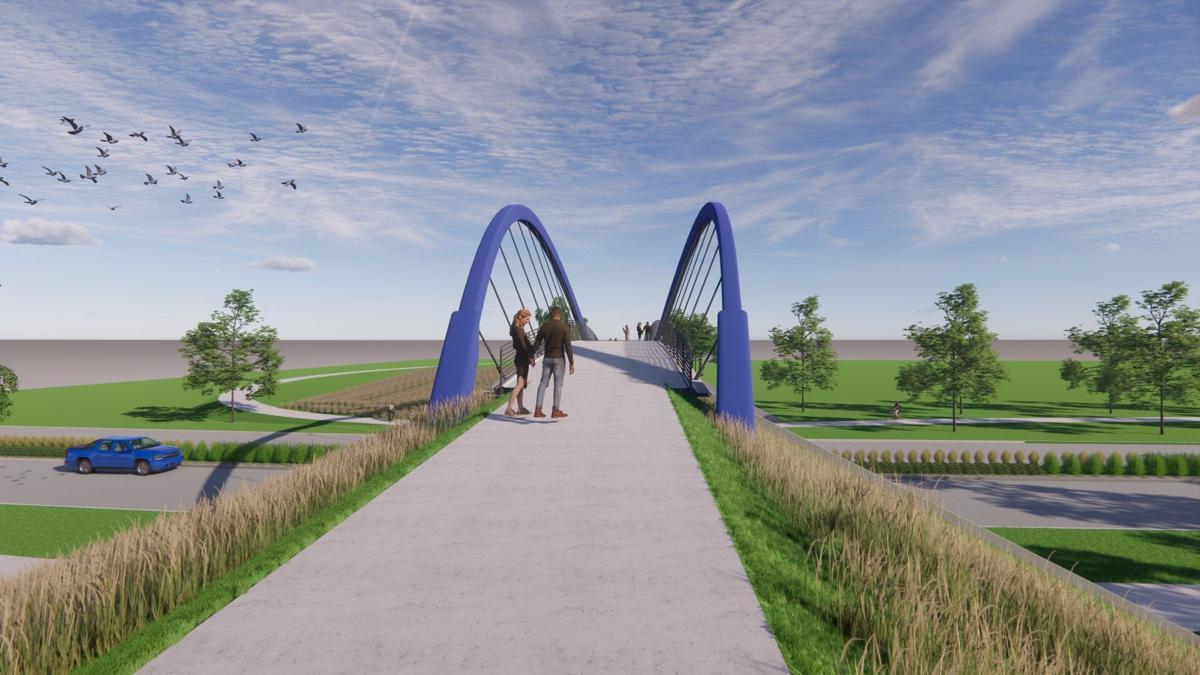 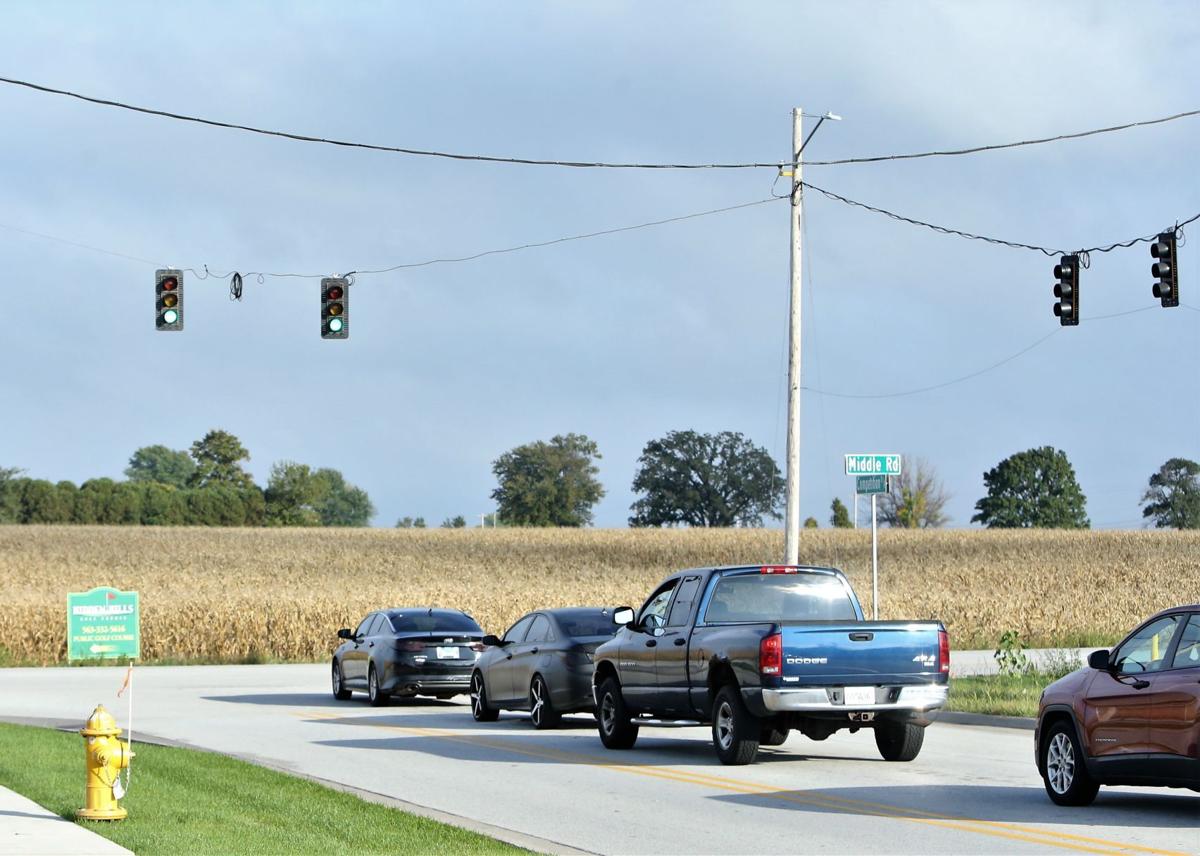 Developers of the TBK Bank Sports Complex and retail area are eyeing an expansion across Middle Road. 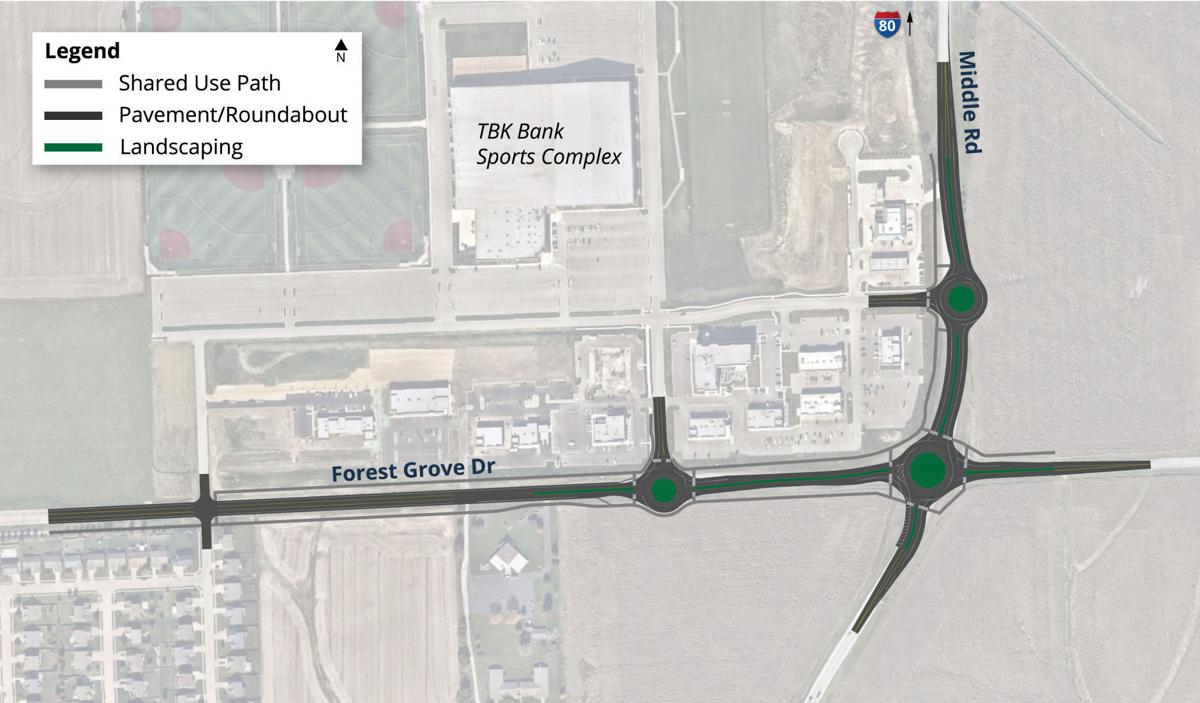 Reconstruction plans for Forest Grove Drive and Middle Road. Contributed by the City of Bettendorf.

Bettendorf has set plans in motion to build a pedestrian bridge across Middle Road in northern Bettendorf near the TBK Bank Sports Complex.

The city council gave city staff an OK on Dec. 21 to apply for a federal grant to cover expenses of a pedestrian bridge, which Economic Development Director Jeff Reiter said would be located north of Kwik Star and south of I-80 and would be coupled with plans to reconstruct Middle Road and Forest Grove Drive leading to the sports complex that has seen increasingly heavy traffic since it first opened.

The new bridge would also connect the current sports complex with future trails and a major new expansion in the works across Middle Road that could double the complex's size.

The proposed pedestrian bridge “is being designed to be functional and to be a ‘gateway sign’ for people coming into Bettendorf off of I-80,” Reiter wrote in an email.

The concept for the bridge mimics the arches of the new I-74 bridge over the Mississippi River, which connects Bettendorf to Moline. The proposed bridge has so-called butterfly arches that are tall enough they can be seen from I-80, Reiter said. The color blue matches the Bettendorf logo's blue color, Reiter added.

"We arrived on the blue as a concept because it works with our branding, and we arrived on the arch span because of its height and its impact it's going to have on this region."

The one-time grant is through the Economic Development Administration, according to a memo to city council members, for infrastructure that supports travel, tourism and outdoor recreation to assist local economies affected by COVID-19 or recent natural disasters.

About $3 million would be secured if Bettendorf wins a grant, according to the memo, and the city would need to assist with constructing connectors to the trail system along Middle Road and Forest Grove Drive.

Reiter said final estimates for Bettendorf’s share of the cost of the project are yet to be determined and would be contingent on final engineering and landscaping and signage.

Reiter told council members on Tuesday that staff believed they had a "home run" application for the grant, having received letters of support for the application from the Pleasant Valley School District, Visit Quad Cities, Quad Cities Chamber, Focus Development, and the TBK Bank Sports Complex. Most importantly, Reiter said, the Bi-State Regional Commission authored a letter of concurrence on the project, which the commission said falls in line with the region's economic development plan.

If everything goes according to plan and the city wins the grant, Reiter said the construction on the pedestrian bridge would begin in early 2024.

It’s part of a larger plan to create a new gateway to the north into Bettendorf, according to city staff, including reconstructing intersections on Forest Grove Drive and Middle Road.

The city hired HDR to design safer intersections on Forest Grove Drive and Middle Road near the sports complex, which draws thousands of visitors every year and is surrounded by hotel, retail, dining, new residential houses and a school that opened this fall, increasing traffic significantly over the past several years. Plus, the developers of the TBK Bank Sports Complex are eyeing a major expansion across Middle Road on 109.5 acres of land, which is planned to add more capacity to the sports complex.

The currently signaled intersections near the sports complex are set to be replaced with two multi-lane and one single lane roundabouts. Those intersections include:

New 10-foot wide recreational trails for pedestrians and bicyclists will line both sides of Forest Grove Drive from Friendship Path to Middle Road. It’ll connect with existing trail that ends at International Drive, and would be expanded if the city wins the pedestrian bridge grant.

Bidding for the project is planned to be in March or April 2022, said City Engineer Brent Morlok, and construction is expected to begin soon after. Morlok said the city is waiting on the Iowa Department of Transportation to review and approve its 90% plan.

According to the city's website for the project, Bettendorf city staff anticipate the roundabouts to take a year to complete, with final landscaping, restoration, and minor construction to be completed the following spring. A pre-construction public meeting is expected to be in early 2022.

The project is also set to include new on-road bike lanes, storm sewer and LED lighting.

A $5.96 million federal aid award is funding the design, engineering and construction activities for the reconstruction project, with the remaining $5.5 million of the project cost paid for by the city, according to the website. 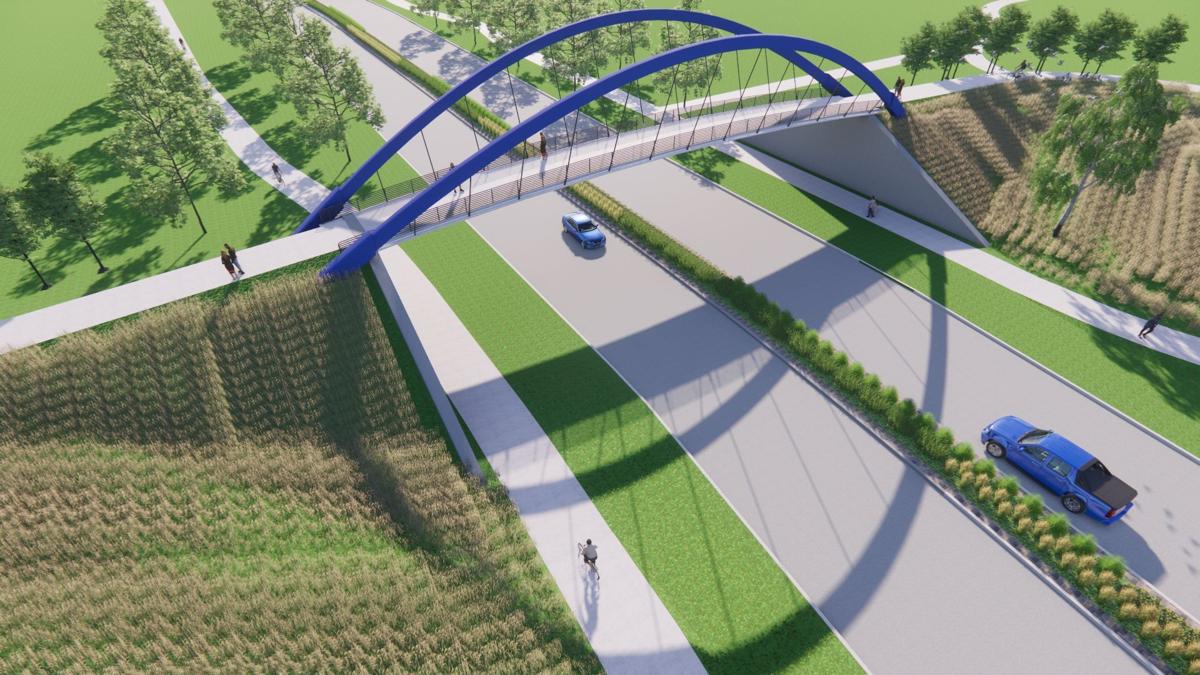 Developers of the TBK Bank Sports Complex and retail area are eyeing an expansion across Middle Road.

Reconstruction plans for Forest Grove Drive and Middle Road. Contributed by the City of Bettendorf. 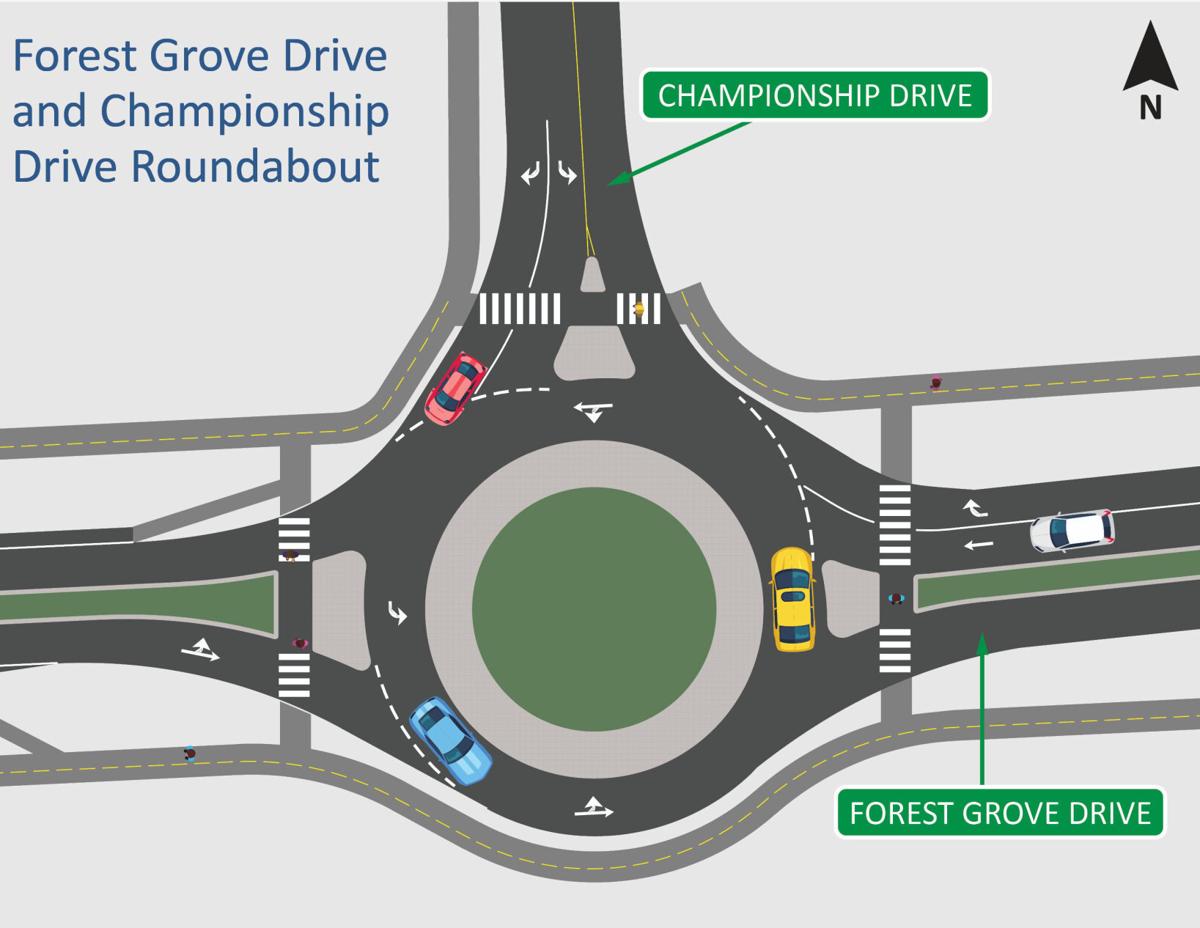 Roundabout concept for the intersection of Forest Grove Drive and Championship Drive. Contributed by the City of Bettendorf. 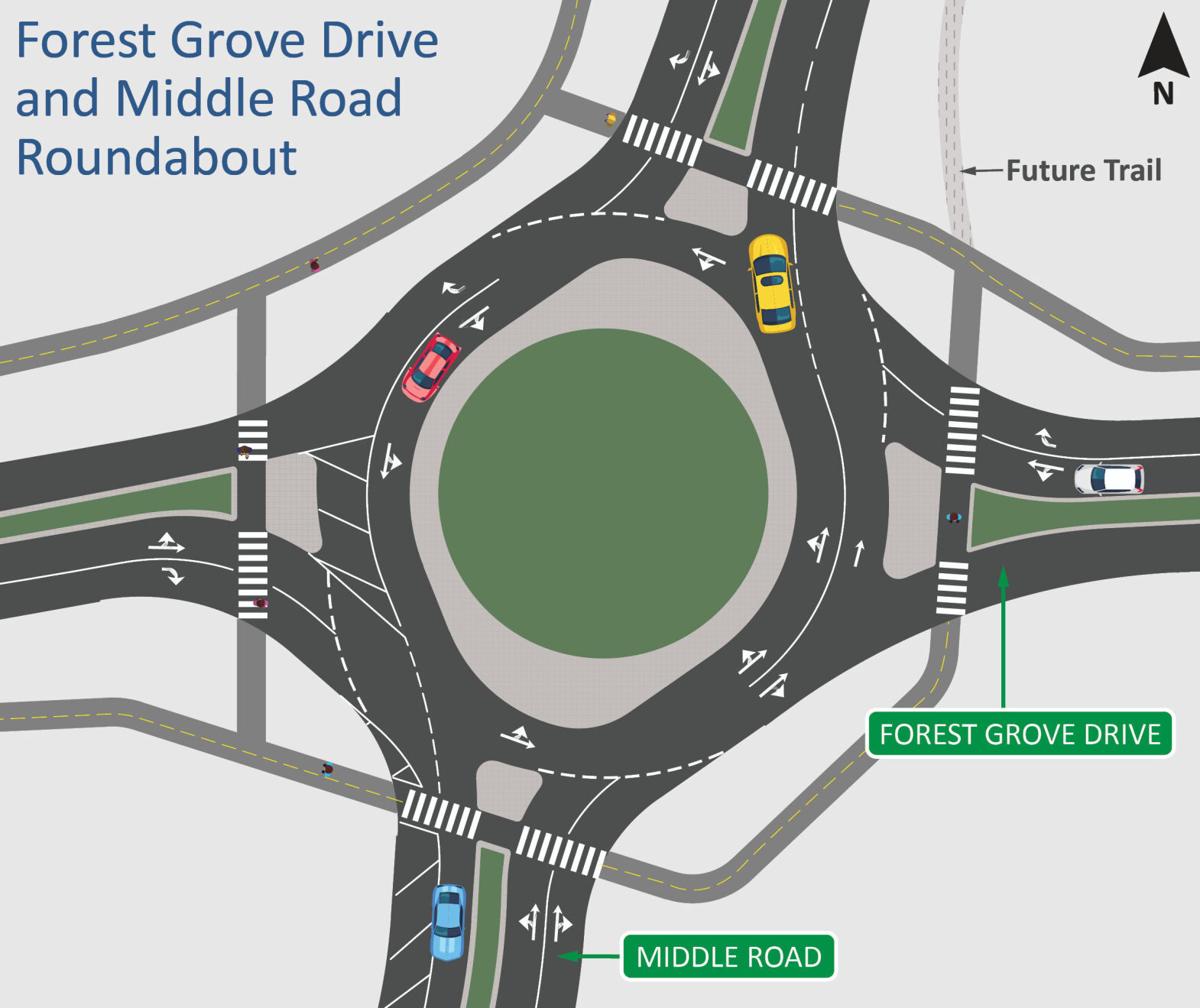 Roundabout concept for the intersection of Forest Grove Drive and Middle Road. Contributed by the City of Bettendorf. 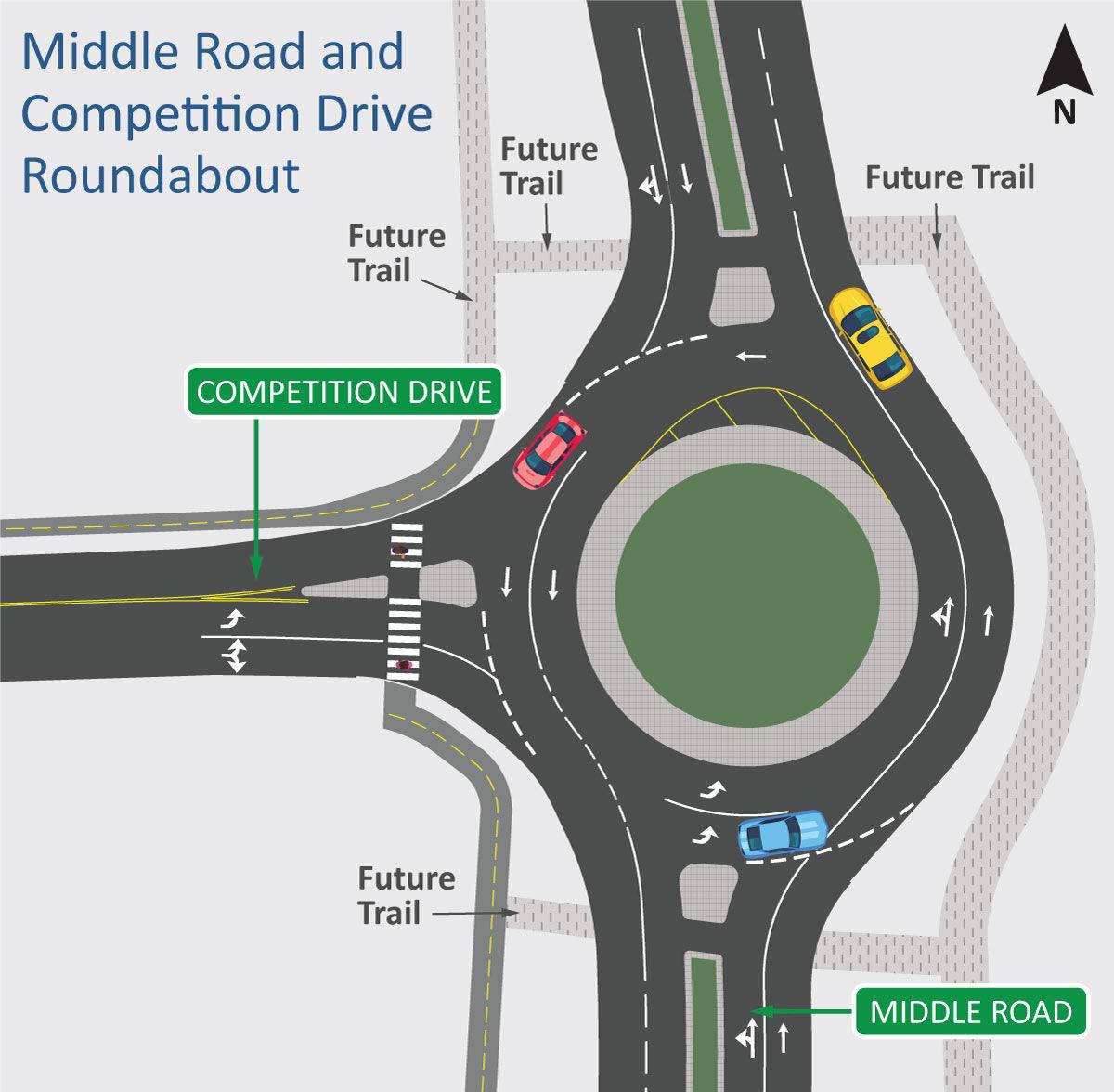 Roundabout concept for the intersection of Middle Road and Competition Drive. Contributed by the City of Bettendorf.