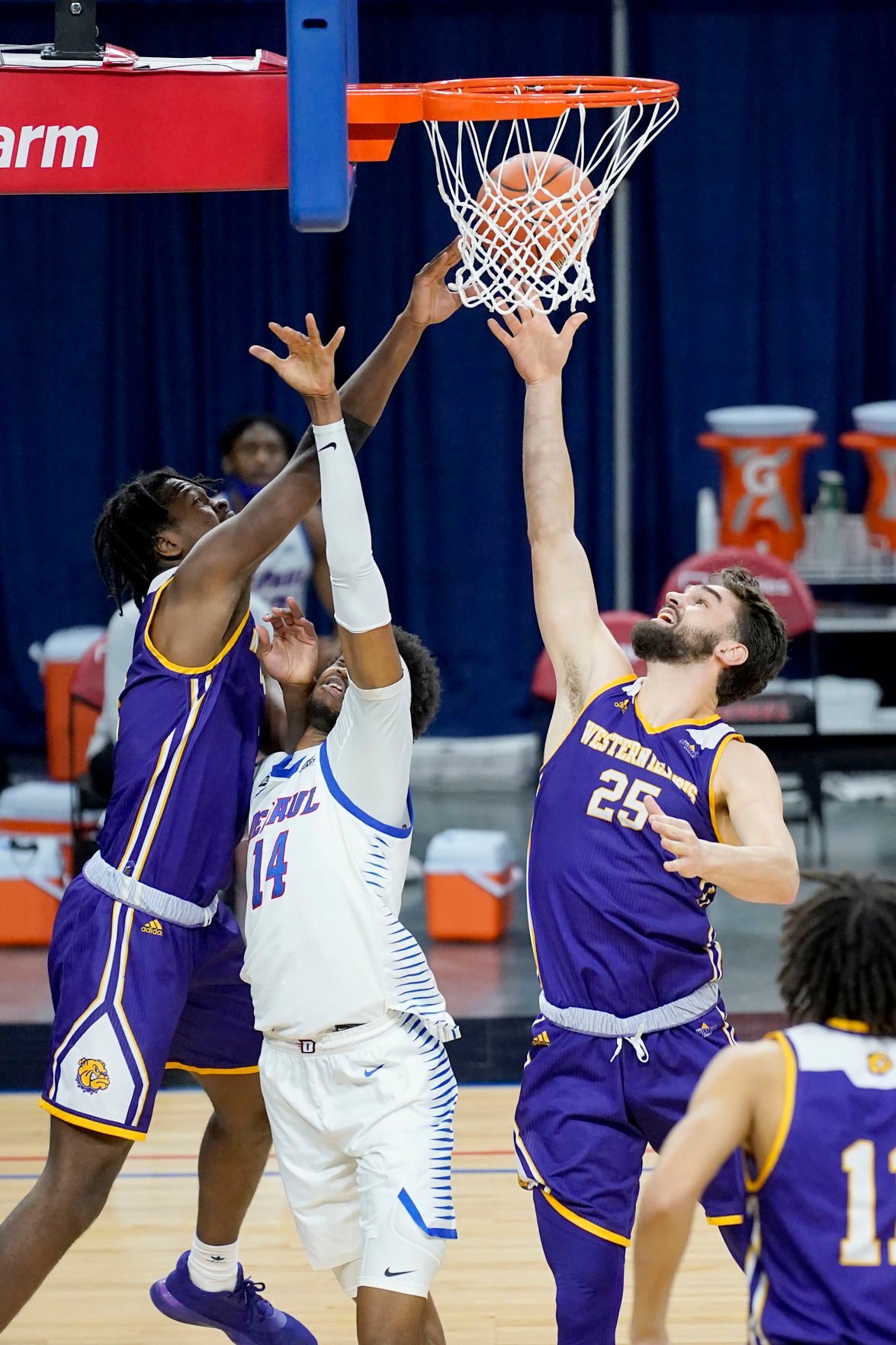 After collecting 1,500 points and 698 rebounds in four years at Pleasant Valley High School, Will Carius (25) has accumulated 1,601 points and 679 rebounds in parts of five seasons at the college level. And he now has decided to play one more season at Western Illinois. 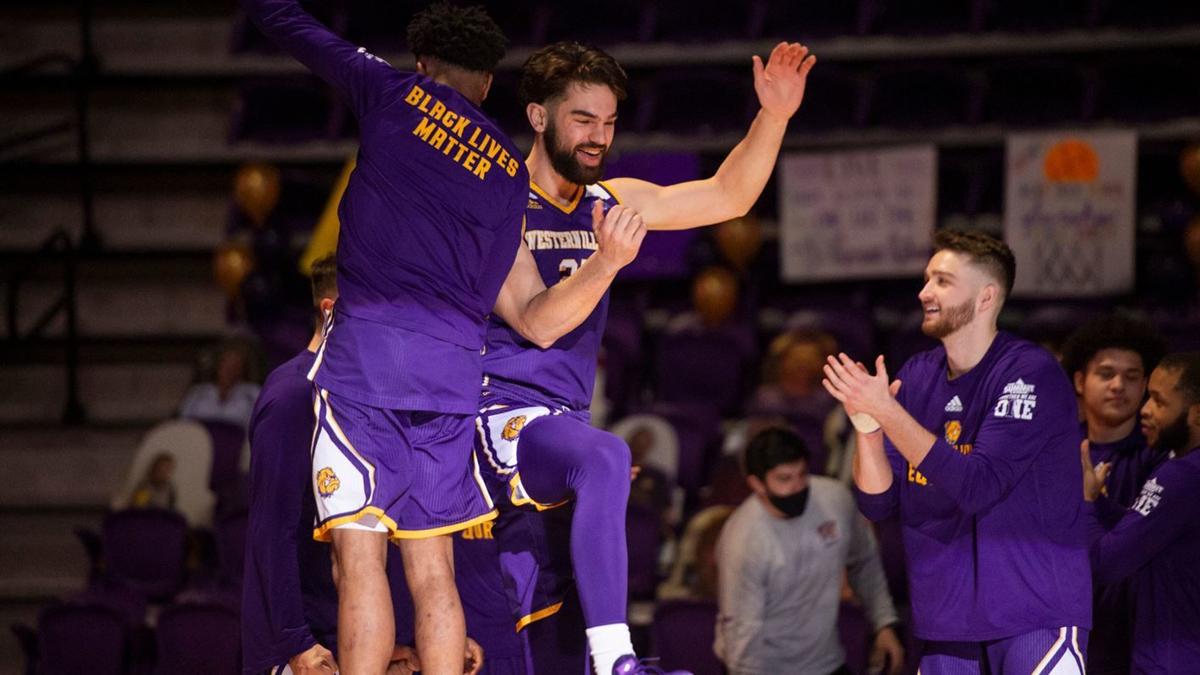 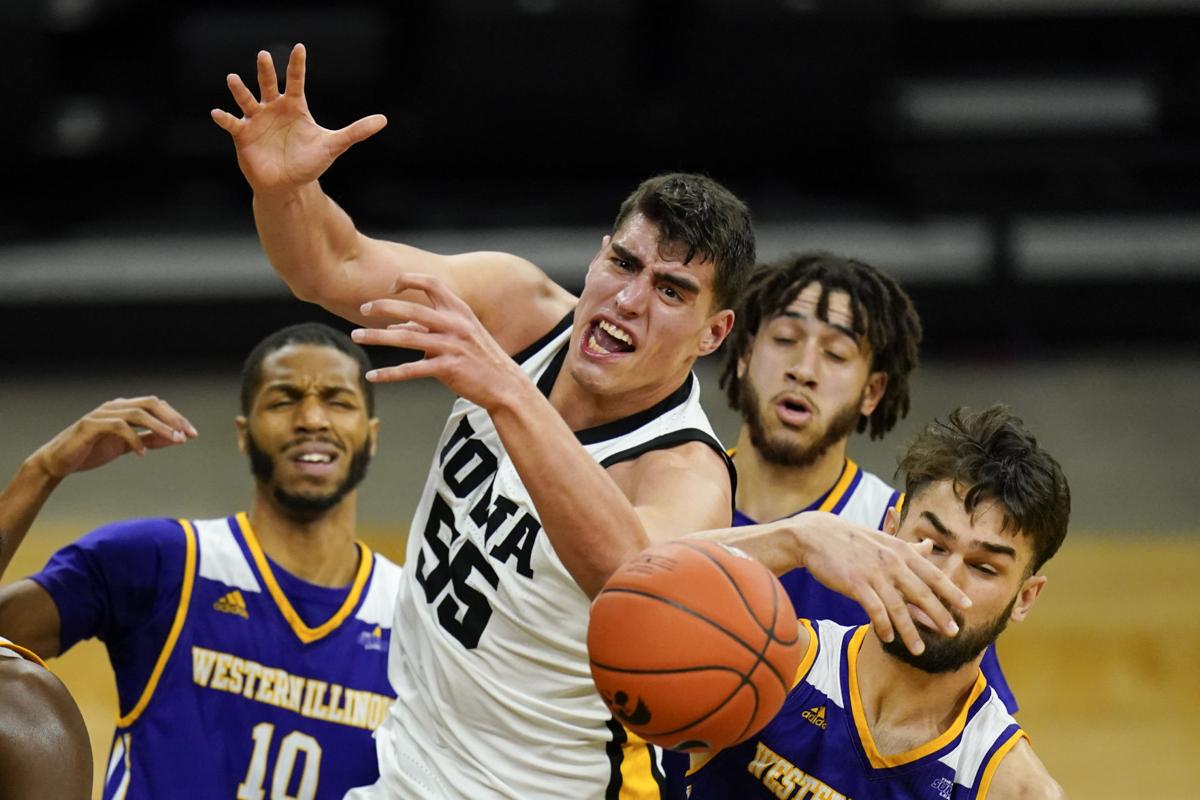 Iowa center Luka Garza (55) fights for a rebound with Western Illinois forward Will Carius, right, during a Dec. 3 game. Carius scored 10 points in the contest, his first at the Division I level.

For a few years now, Will Carius’ goal has been to land a job playing professional basketball overseas somewhere.

Maybe in Europe. Maybe in Asia. Maybe in some other far-off continent. The former Pleasant Valley High School star wasn’t really that choosy.

But with COVID-19 still taking its toll around the globe, this isn’t really the best time to be going international.

So Carius is going to take advantage of a one-time-only opportunity offered by the NCAA: He is going to play one more season at Western Illinois.

"It just seemed like a good opportunity to continue to do what I love to do and finish up my master's degree," Carius said, admitting that the impact of the virus is the primary reason behind his decision.

"So, there is the chance to stay in school a little bit longer and stay in shape and keep working on my game and be part of a great program."

Carius already has made history by being one of the few players ever to play basketball in NCAA Divisions I, II and III. He will most definitely be the first to spend two seasons at each of those levels.

He began his career at D-II Northern Michigan, averaging 10.6 points per game in an injury-shortened freshman season in 2016-17 and 12.3 as a sophomore.

He then transferred to D-III Monmouth College, where his father Brant and grandfather Al had played. He became a superstar there, scoring 62 points in one game, averaging 25.5 points and 11.0 rebounds per game as a junior and earning All-American honors. He posted similar numbers in the first six games the following season before being sidelined by a back injury.

He then took advantage of the NCAA’s graduate transfer rule and enrolled at Western Illinois. Although the Leathernecks only went 7-15 in coach Rob Jeter's debut season, which was somewhat abbreviated by the virus, Carius enjoyed the campaign as much as any he has played at the college level.

"I knew that they were going to be a fun group coming into it but just throughout the year it just showed how good of a fit it was for me," Carius said. "The team was great. It was a great group of guys to play with."

The 6-foot-7 forward was the Leathernecks’ leader and top offensive weapon almost from the very beginning, but he started fairly slow, scoring 10 points with five rebounds, three steals and three blocked shots in an opening 99-58 loss to Iowa.

But as the season progressed, he gained more of a feel for the D-I level.

"It’s definitely a learning curve a little bit," he said. "It’s not like I was horrible in the beginning, but there was just some things I needed to work out for myself and get some games in at this level."

He caught fire later in the season, and on Jan. 29 had a remarkable 34-point game against North Dakota in which he attempted only 12 shots from the field. It was the first time in more than a year that any player in the entire country had scored that many points with that few shot attempts.

It was the start of a six-game stretch in which Carius averaged 24 points per game. He played the full 40 minutes twice in that run and played 39 minutes in two other games.

He cooled off a bit in the final few games but still averaged 14.7 points per game for the season, 16.4 in Summit League play. That was enough to earn second-team all-conference honors and make him very excited about what he and the Leathernecks can do next season.

"It’s just having that full year at this level under my belt," he said. "I’m excited about the things that we can do."

WIU had a young team with only one other senior, and unlike so many other D-I teams, it hasn’t been stripped bare by the NCAA’s transfer portal.

"Our core group who got a lot of minutes is staying around so that’s really exciting," Carius said. "And then we’re adding a couple more pieces."

"I’m really excited about what we have coming together this summer," Carius said. "We didn’t have that last year, to be able to work out over the summer and really sort out what we want our goals to be and what we want to get done."

The decision to stay around another year in Macomb is going to help Carius academically, too, in addition to enhancing his chances of playing overseas in the future.

He had been on an accelerated program to try to earn his master's degree in business administration this summer.

"But since I’ve decided to stay around, I’ve been able to spread it out and be done by next spring," he said. "It will be a situation where I’m not taking a crazy heavy class load so I’ll have even more time to focus on basketball."

Have an easy, breezy summer with the Bettendorf Library

Summer is almost here! The Bettendorf Public Library can help make this season an easy, breezy summer for you and your family.

Junior-led Spartans are acing the competition

With five juniors among its top six, the Pleasant Valley boys tennis team has overwhelmed the competition in the first month of the season.

After collecting 1,500 points and 698 rebounds in four years at Pleasant Valley High School, Will Carius (25) has accumulated 1,601 points and 679 rebounds in parts of five seasons at the college level. And he now has decided to play one more season at Western Illinois.

Iowa center Luka Garza (55) fights for a rebound with Western Illinois forward Will Carius, right, during a Dec. 3 game. Carius scored 10 points in the contest, his first at the Division I level. 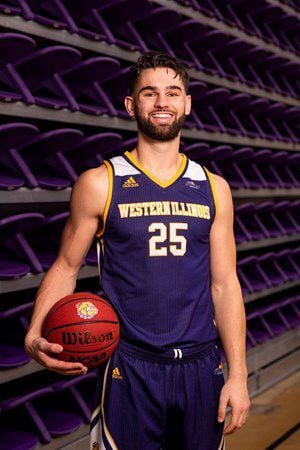