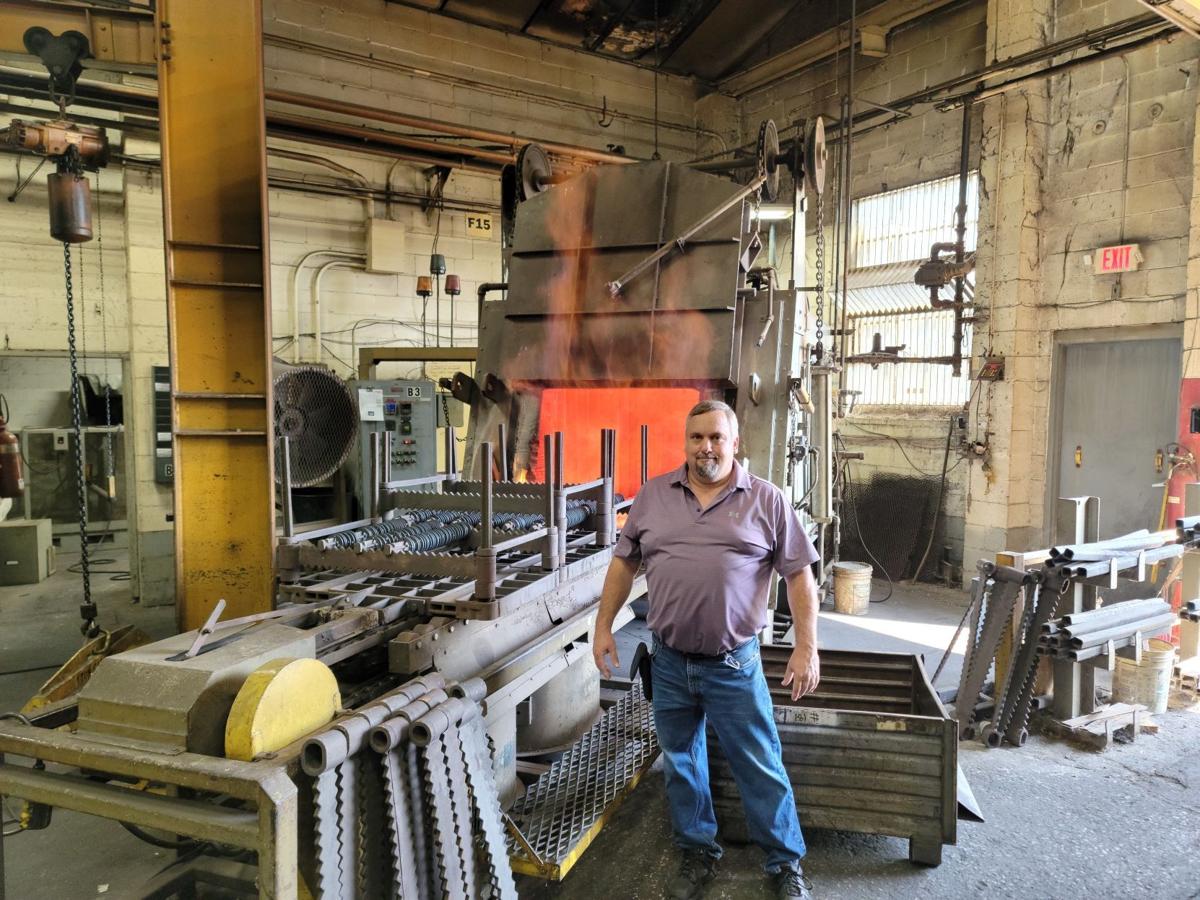 A recent photo of the Donohoo Steel Treating plant. The business has undergone numerous expansions over the years in its original location along Bettendorf’s industrial corridor. 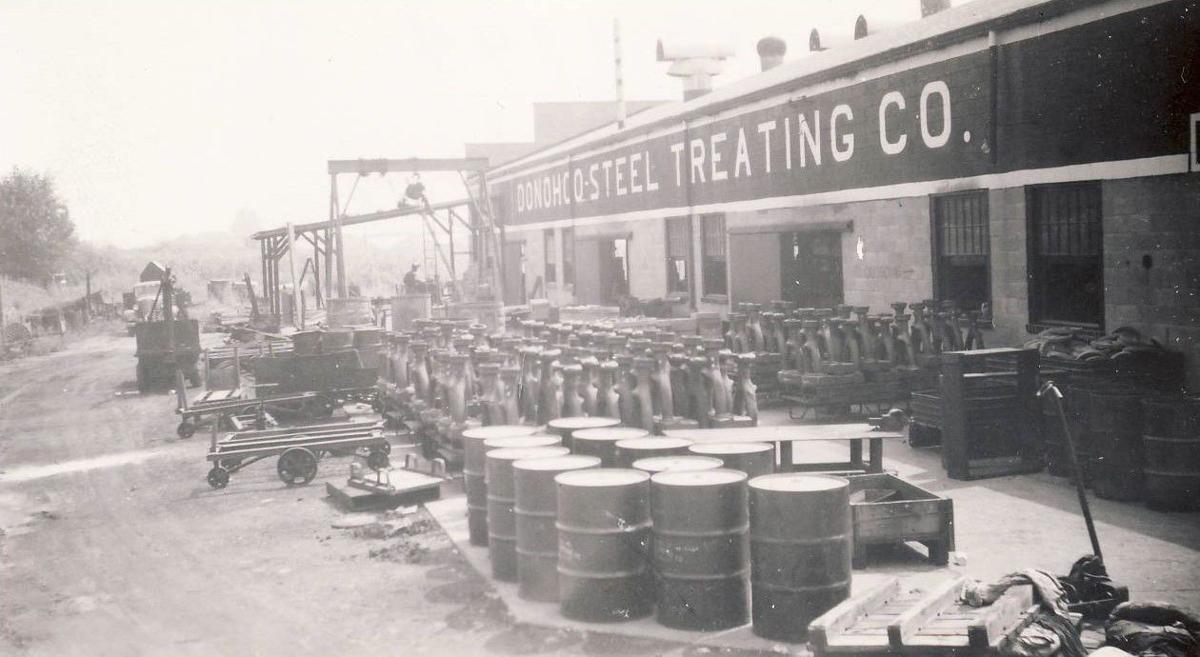 The Donohoo Steel Treating plant in 1949, just three years after it opened.

Chris Zubroski, president of Donohoo Steel Treating, often uses the phrase “back in the day” when talking about the Bettendorf company that is celebrating its 75th anniversary this fall.

It’s a testament to the company’s long history in the commercial heat treating business as technology continues to shape an industry that affects all aspects of our lives.

During an interview, Zubroski points to the blades on a pair of the familiar orange-handled scissors found in many homes to talk about the heat-treating industry.

“These have been heat-treated, to keep them from wearing, and to keep a sharp edge,” he said. “Everything from your automobile and bicycle to your garden tools has had some form of heat treating. People don’t realize how much material is heat-treated in their everyday life.”

Customers bring semi-finished parts to Donohoo to process them through industrial furnaces. The parts are heated and then quenched in oil, water or air.

Zubroski has worked at the plant for close to half of its 75 years, starting right after high school doing maintenance on equipment. He worked his way up to operations manager before buying the business from the third generation of the Donohoo family just over seven years ago.

Completion of construction of the Donohoo plant in 1946 on what was then called Zimmerman Road (now 33rd Street) was met with some fanfare locally. A caption under a photo of the plant in January 1947 in The Davenport Daily Times spoke of a busy schedule during its first year. The Donohoo plant was reported then to be the largest steel-treating plant within a 200-mile radius of Davenport.

Officers of the company at its formation in 1946 were William M. Donohoo, president and treasurer; Gus W. Donohoo, vice president; and Anne Donohoo, secretary. Early stories about the company spoke of William Donohoo’s 40-plus years in the heat-treating industry.

Just three years after the plant opened, the company announced a major expansion that would double its capacity and workforce.

“Rapid expansion has made additional room imperative, officers point out,” it was reported in a story in the Sept. 2, 1949, Daily Times article.

Zubroski said it is likely the manufacturing boom after World War II fueled the need for heat-treating materials for companies producing machinery, such as John Deere, Caterpillar, and International Harvester.

“All of these companies were in this area and they needed heat treating,” he said.

But just months after the Donohoo expansion was announced, a devastating flash fire destroyed most of the plant.

The top headline on the front page of the March 18, 1950, Daily Times told the story: “FIRE WRECKS STEEL TREATING PLANT”. Only a paint shed was saved, and the two employees in the plant at the time escaped without injuries.

While the fire still smoldered, William Donohoo announced plans to build again on the same site as soon as it was possible. Less than a year later, with the Korean War underway, the rebuilt plant was at near-capacity production, “busy with defense orders from industrial plants within a 500-mile radius,” according to The Daily Times.

In the ensuing years, the plant has undergone a number of expansions, Zubroski said, as the workflow and technology have changed the face of the business.

“Even going back in my time, the manual labor involved was back-breaking work,” he said. “Now we have hoists and cranes and fork trucks to make it easier.” Electronic controllers and programmable machinery have also changed the business.

Full-time staff at the plant is usually around 20, with operations going 24 hours a day, six days a week, he said.

And while Donohoo Steel Treating has seen many changes over its 75 years, one unwavering principle remains: a commitment to quality and customer service.

“At Donohoo Steel Treating, it is our solemn belief that the most direct path to growth and prosperity is through the quality of our work and the quality of relationships with our customers. We are committed to following this simple philosophy in order to achieve a superior quality standard,” reads the company’s Quality Policy.

Zubroski is proud of the quality and quick turnaround that Donohoo provides its customers.

“Our specialty here tends to be smaller lots of parts and faster turnaround,” he said. Eighty-five percent of all orders are completed in 48-72 hours or less.

“Our company success for 75 years would not have been possible without the dedication and hard work of our employees past and present,” he said.

Donohoo also is committed to supporting the community, with employees volunteering for various events, including the annual Downtown Bettendorf cleanup. Zubroski is a past president of the Bettendorf Business Network and serves on its board of directors.

— What’s New at the BBN? is a column provided by the Bettendorf Business Network.

A recent photo of the Donohoo Steel Treating plant. The business has undergone numerous expansions over the years in its original location along Bettendorf’s industrial corridor.

The Donohoo Steel Treating plant in 1949, just three years after it opened.