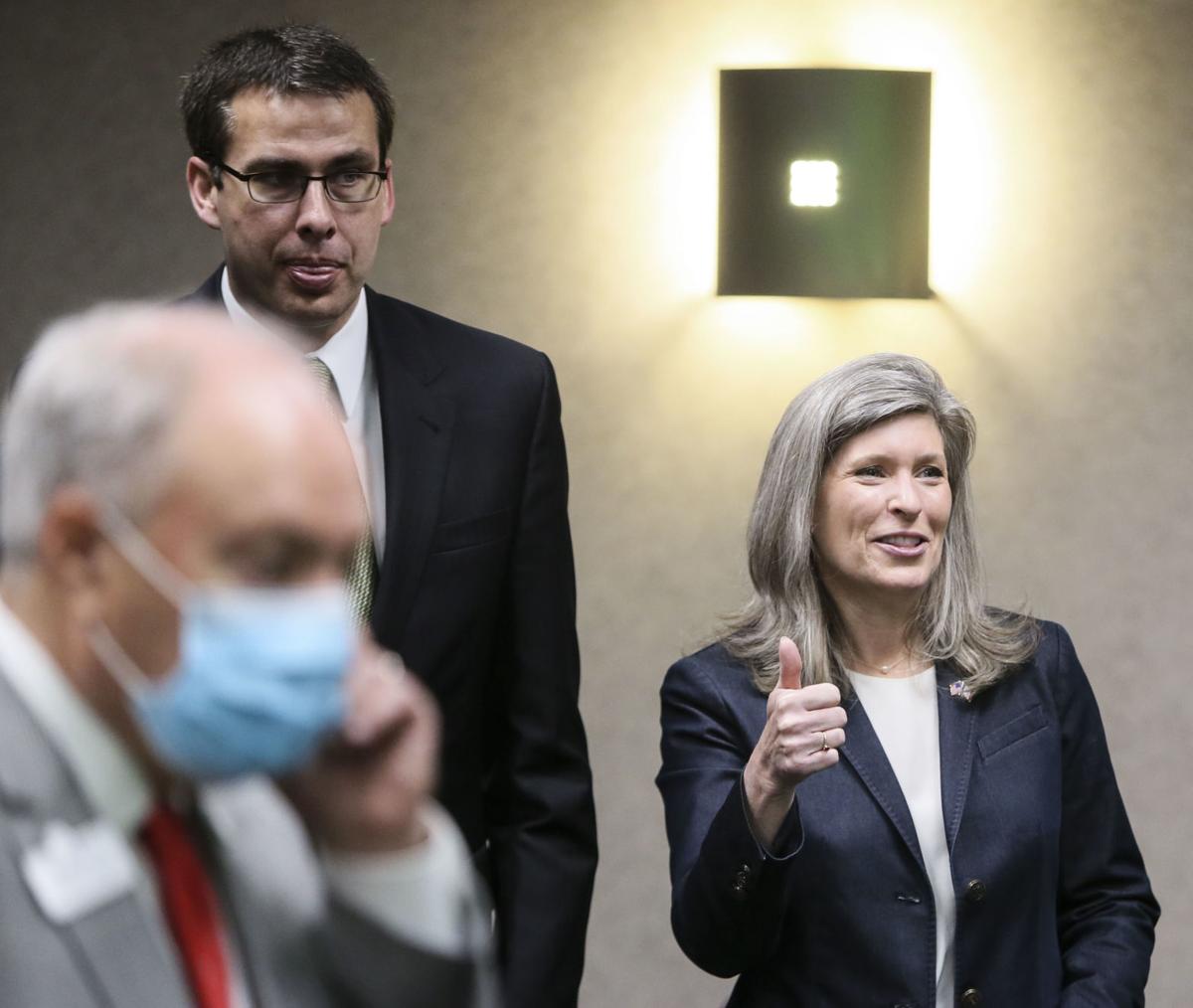 Iowa Sen. Joni Ernst, R-Iowa, listens to Bettendorf Mayor Bob Gallagher speak to media on her visit with Bettendorf city officials Friday. The stop was apart of her 99 County Tour of the state for 2021. 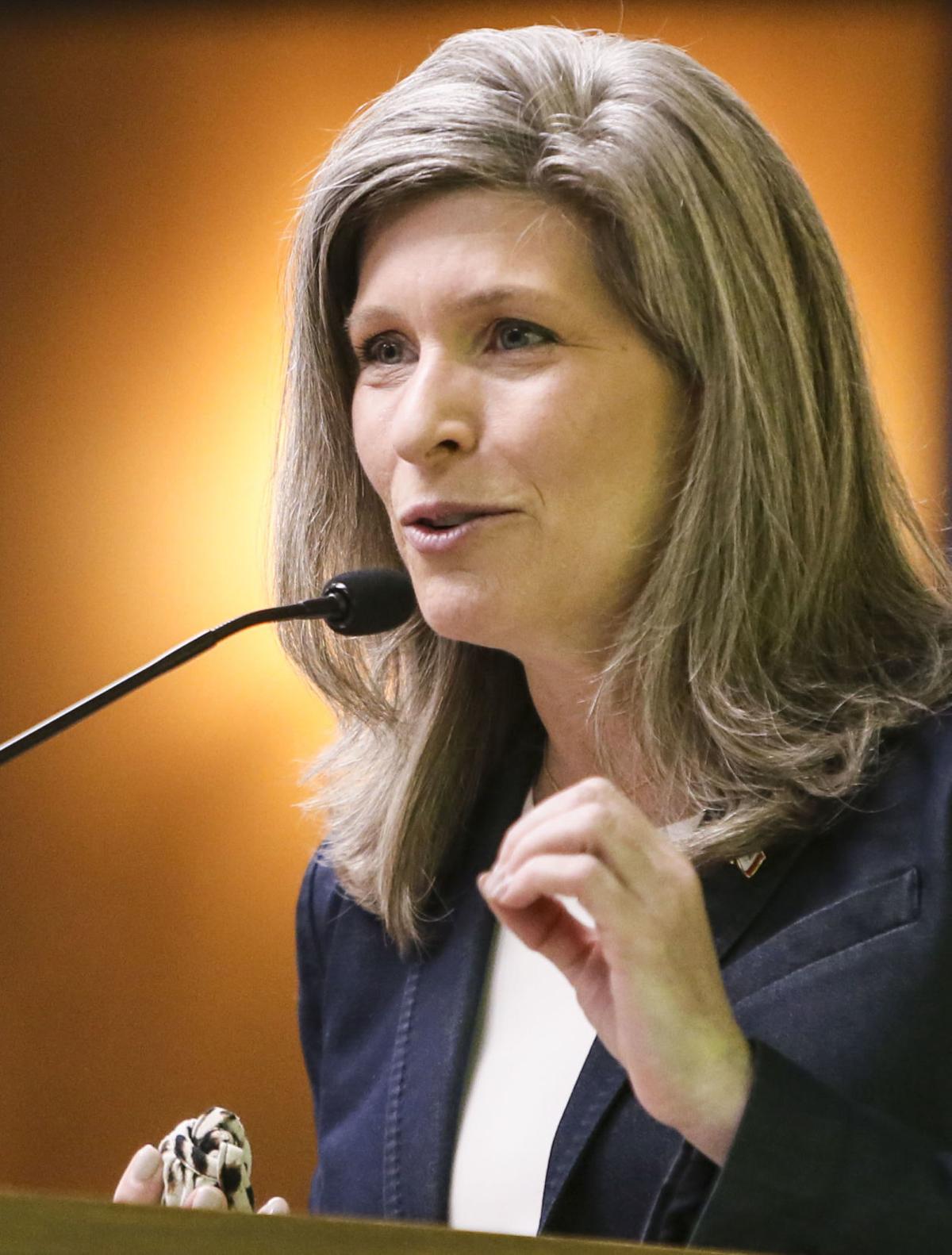 Iowa Sen. Joni Ernst, R-Iowa, speaks during her visit with Bettendorf city officials Friday. The stop was apart of her 99 County Tour of the state for 2021. 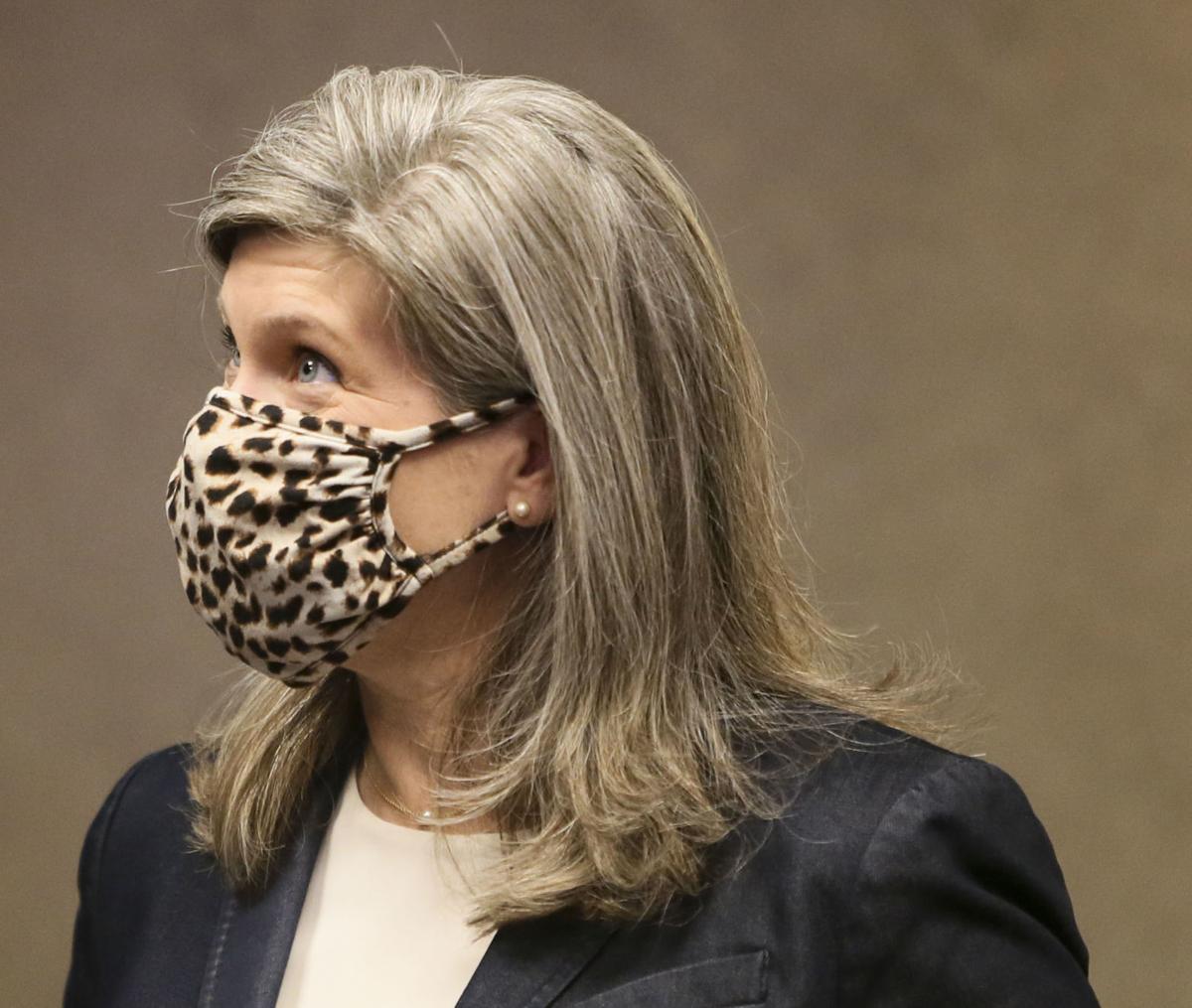 Iowa Sen. Joni Ernst, R-Iowa, spoke to media on her visit with Bettendorf city officials Friday, April 9, 2021. The stop was apart of her 99 County Tour of the state for 2021. 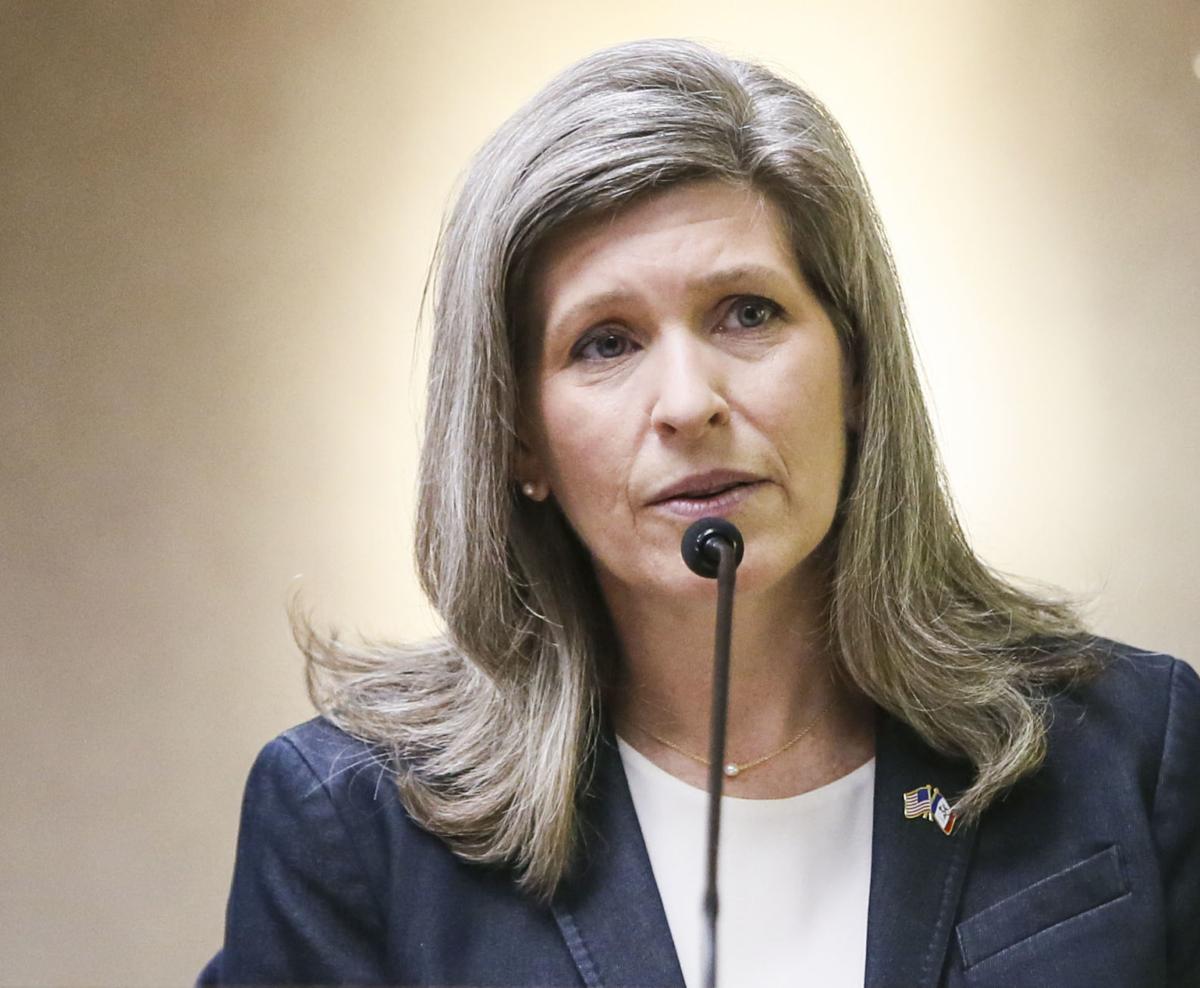 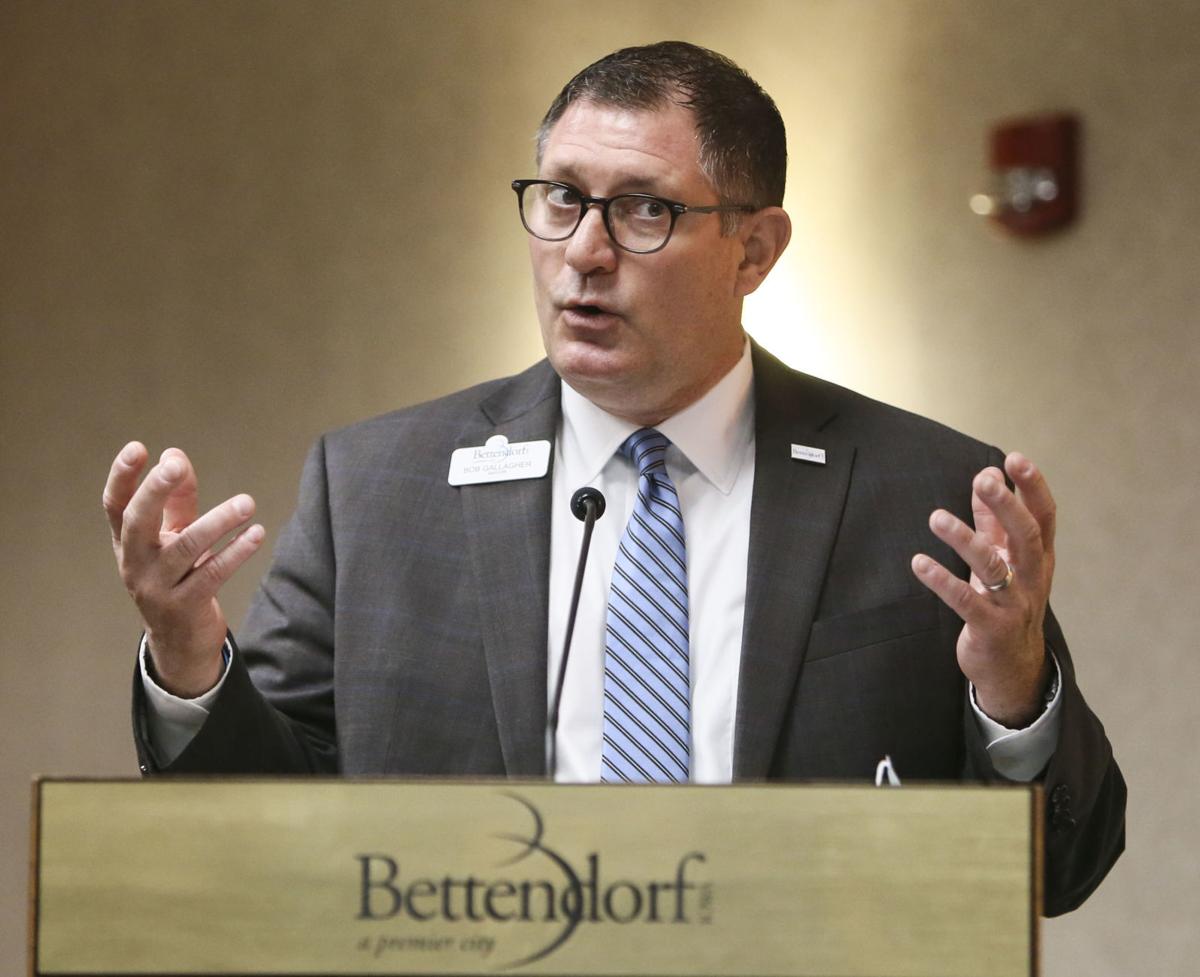 U.S. Sen. Joni Ernst, R-Iowa, on Friday put to bed any speculation as to whether she will run for president in 2024.

During a stop in Bettendorf as part of her regular tour of all 99 counties in Iowa, Ernst said there was "zero" chance she will run for the U.S. presidency in 2024.

Ernst's name had been floated by some media outlets and political oddsmakers as speculation has already begun on possible GOP presidential candidates in 2024.

"I absolutely love working for the people of Iowa," Ernst told reporters Friday. "I'm just really excited to see who pops up as GOP contenders."

Ernst stopped at Bettendorf City Hall, where she spoke with city leaders about ongoing projects in the community, including the city's plans for elevators connected to the new Interstate 74 bridge.

City officials say the project has hit a snag over requirements of the Buy America provision that requires the I-74 project to use primarily U.S.-made parts and components.

City officials say elevator suppliers in the U.S. do not produce specific components of the structure. Due to the lack of domestic availability of certain necessary elevator components, city officials are seeking a Buy America waiver.

If the waiver is rejected, city officials have said they would have to find an elevator company that could custom build the two cars to meet the Buy America requirement, which would likely double the city's cost. Officials have said that it's more likely the city would simply wait out the life of the Buy America agreement and go ahead with plans, including elevator cars with foreign-made components, which would delay the project.

Ernst said she intends to call on Transportation Secretary Pete Buttigieg to support the city's request of the waiver.

The letdown structure on the west side of the Illinois-bound span, near the Bettendorf riverfront, is being built to accommodate pedestrians and bicyclists with elevator cars big enough to easily carry bikes from the bridge to the riverfront paths below.

Ernst and city leaders also discussed plans to reconstruct the Interstate-80 bridge and six-lane the interstate from the Mississippi River to Iowa City, as well as funding upgrades to area lock and dam systems.

"Sixty percent of the world's grain travels down that Mississippi River. Those lock and dam systems that are over 50 years antiquated are going to have to be replaced," Bettendorf Mayor Robert Gallagher said. "The senator is on board, understanding that that's the real type of infrastructure our community and our states need — roads and bridges and sewers," in addition to increased federal funding to help communities protect vital infrastructure such as wastewater treatment plants from flooding being exacerbated by climate change.

About $621 billion of the proposed $2 trillion package would go toward transportation infrastructure such as bridges, roads, public transit, ports, airports and electric vehicle development.

The White House has said the plan would fix 20,000 miles of roads and 10,000 bridges, while also addressing climate change and racial inequities and raising corporate taxes.

"There is more in this package for electric vehicles than our roads and our waterways," Ernst said. "Let's go back and take a look at the work that we did in the (Senate) Environment and Public Works Committee in the last Congress," including work on a bipartisan highway bill, "and craft legislation that focuses on infrastructure; not a lot of fancy, extraneous policies that the Democrats want to see."

Scott County Democrats, in a statement, pushed back on Ernst criticism of Biden's infrastructure plan, claiming "a more accurate estimation (according to CNN) of the total percentage earmarked for traditional infrastructure is 30%."

"Republicans are playing word games while Americans drive across unsafe bridges," the statement reads, which argues Biden's plan will increase jobs. "The truth is, Biden’s proposal expands the traditional idea of infrastructure to reflect our more modern reality - that the information superhighway is as much a part of America’s infrastructure as ... a highway. That American businesses need our essential workers to have reliable childcare."

Ernst, too, addressed Biden's announcement of a half-dozen executive actions Thursday aimed at addressing a proliferation of gun violence across the nation that he called an "epidemic and an international embarrassment."

Ernst said she was "disturbed" by Biden's comments that the Second Amendment is "not absolute," and predicted "you will see lawsuits coming out on these executive orders" for potentially infringing on "law-abiding citizens'" Second Amendment rights.

"(N)o amendment to the Constitution is absolute," Biden said Thursday, addressing complaints that rules to limit how guns are sold or who can own them violate the Second Amendment. "You can’t yell crowd — you can’t [yell] 'fire' in a crowded movie theater and call it freedom of speech. From the very beginning, you couldn’t own any weapon you wanted to own. From the very beginning that the Second Amendment existed, certain people weren’t allowed to have weapons. So the idea is just bizarre to suggest that some of the things we’re recommending are contrary to the Constitution."

Biden said he will take what he termed immediate “common-sense steps” to address gun violence, after a series of mass shootings in recent weeks have brought renewed attention to the issue.

Ernst said any gun-reform proposals should be addressed through legislation rather than executive order.

Ernst said she worked with U.S. Sen. Dianne Feinstein, D-Calif., in the last Congress to address gun legislation as part of her work on the Violence Against Women Act, but was stymied by Senate Democratic leadership, "because I was in an election cycle.

"So we're happy to have those discussions, but, again, I want to make sure that we are protecting law-abiding citizen's rights and find a way forward," Ernst said. "So we're willing to take a look, but we have a lot of folks that are very concerned about this issue and that Democrats will go too far in trying to strip away rights, and we can't allow that."

Ernst: Biden has failed to act on promise to unify country, reach across party lines

Iowa's Republican U.S. senators say Democratic President Joe Biden has failed to act on one of his biggest campaign promises: to unify the cou…

Iowa Sen. Joni Ernst, R-Iowa, listens to Bettendorf Mayor Bob Gallagher speak to media on her visit with Bettendorf city officials Friday. The stop was apart of her 99 County Tour of the state for 2021.

Iowa Sen. Joni Ernst, R-Iowa, speaks during her visit with Bettendorf city officials Friday. The stop was apart of her 99 County Tour of the state for 2021.

Iowa Sen. Joni Ernst, R-Iowa, spoke to media on her visit with Bettendorf city officials Friday, April 9, 2021. The stop was apart of her 99 County Tour of the state for 2021.