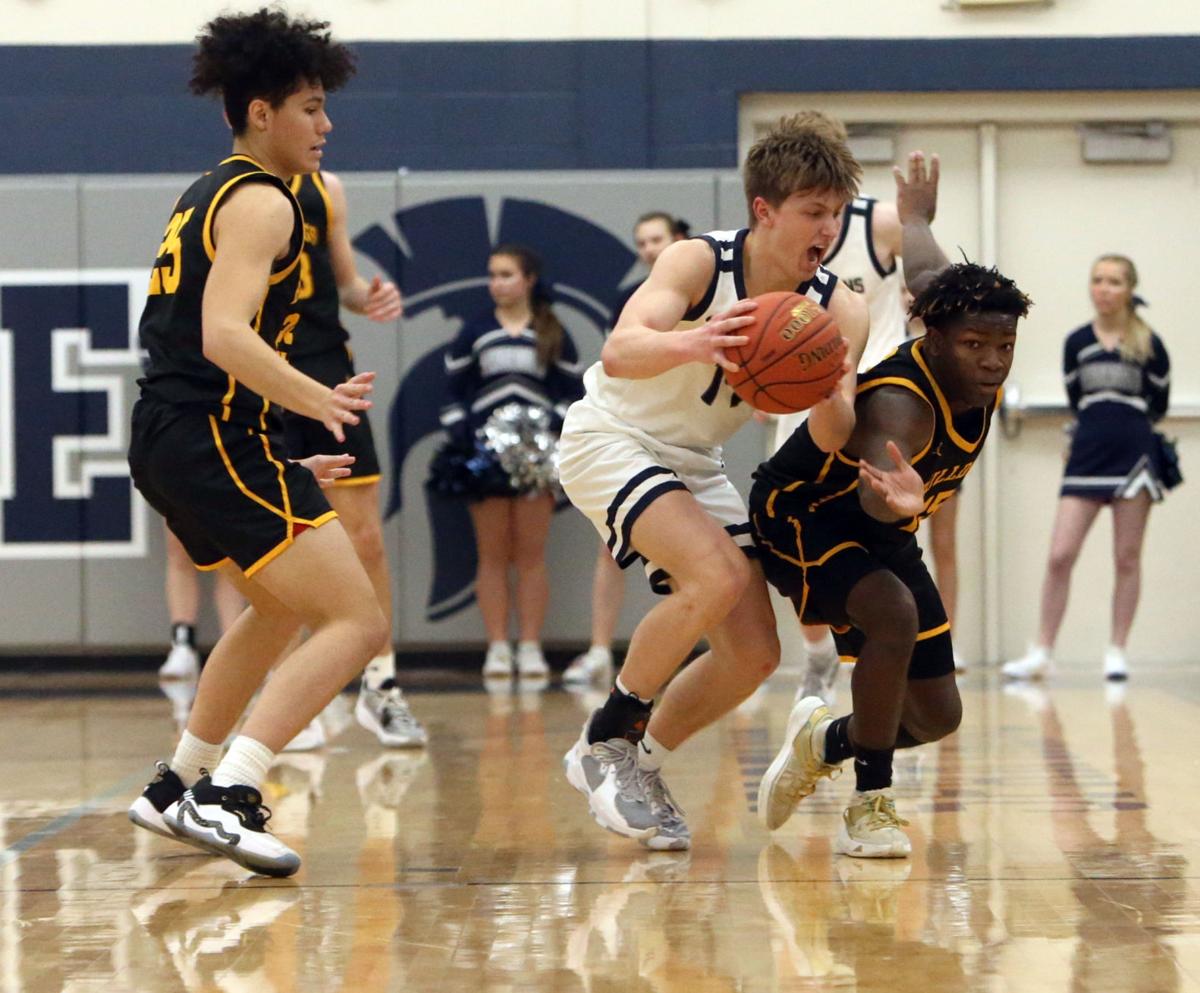 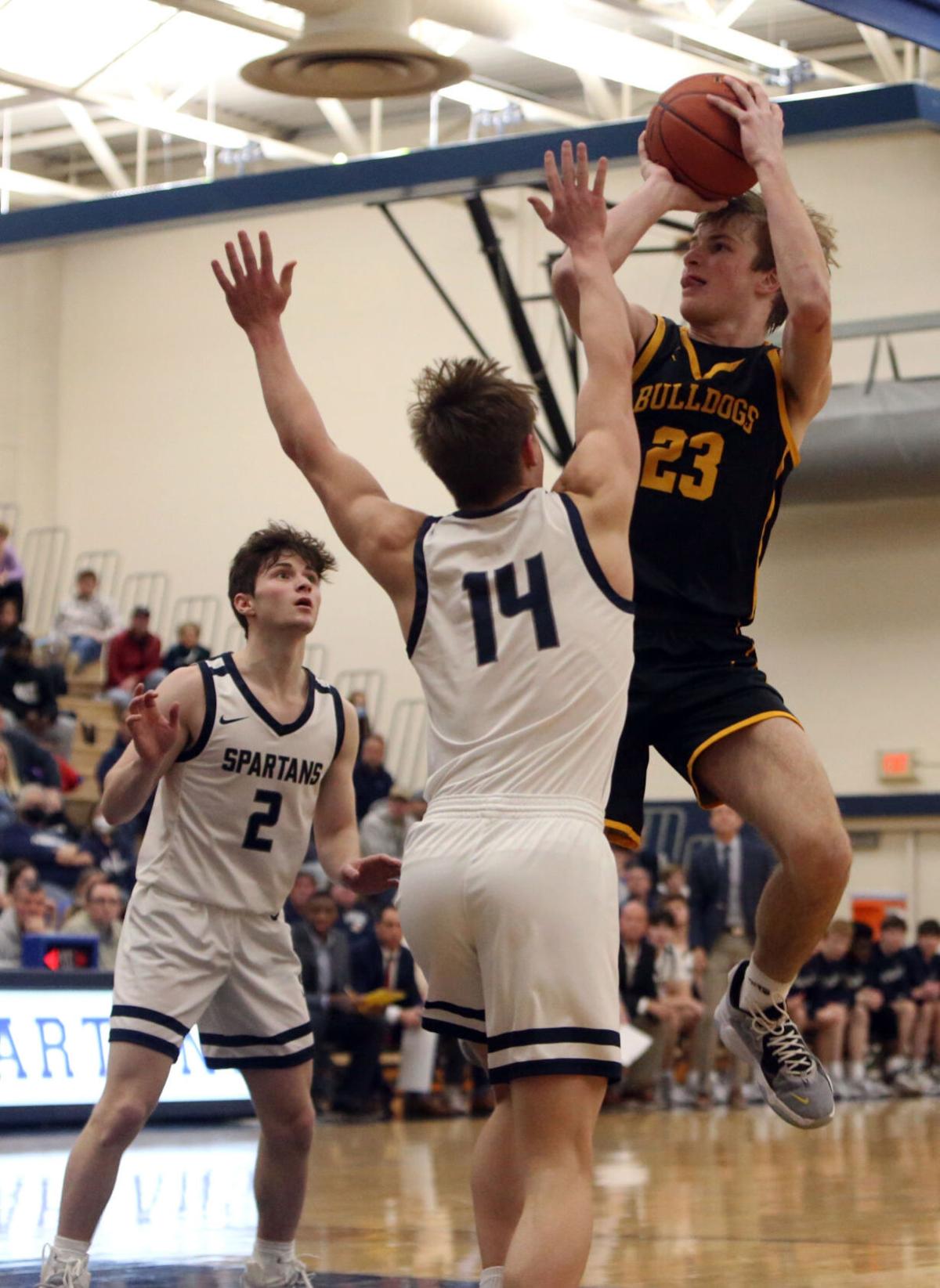 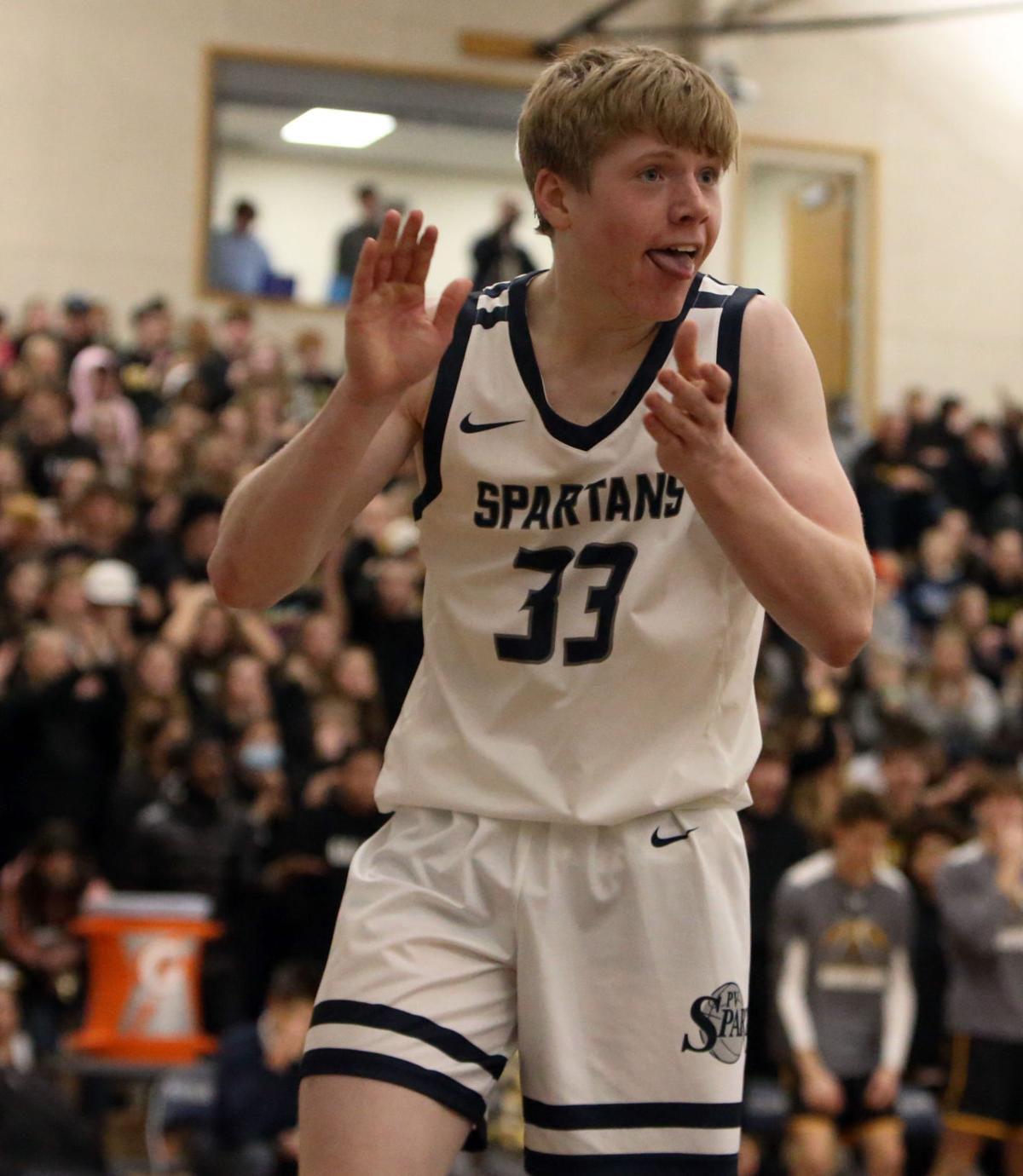 Pleasant Valley's David Gorsline celebrates during Friday's game against Bettendorf. Gorsline had six points and nine rebounds for the Spartans in their 45-36 victory.

There have been some games this season in which the Pleasant Valley High School boys’ basketball team has made shots at a very high percentage.

Friday, Jan. 7 was not one of those occasions.

With its leading scorer 0-for-10 from the field and others struggling to convert at times, the Spartans had to find an alternative route to victory.

The sophomore came up with several critical offensive rebounds and Class 4A third-ranked PV did enough in the second half to stave off a spirited effort from Bettendorf, 45-36, at PV High School.

“It was fun tonight because we got back to old-school PV basketball — guard, get stops and rebound,” Spartans coach Steve Hillman said. “That was the difference.

“David turned it around for us on the offensive glass, something he’s done two or three times this year. We got him in the middle of the floor in the high post and it gives him a great spot to put his head down and rebound. He’s a tough kid.”

Gorsline is listed at only 6-foot, but he offsets that with a relentless motor. He finished the game with nine rebounds (five offensive).

He scored on a putback with just more than 5 ½ minutes left to give PV the lead for good.

“Shots weren’t falling for us, so we had to do the small things coach always talks about,” Gorsline said. “We rebounded, we defended and made plays for our teammates.

“Coach always emphasizes rebounding, and I thought that’s something we really needed tonight. I wanted to get rebounds for my team and make plays.”

Bettendorf assistant coach Alvin Vesey, filling in for head coach Curtis Clark — who was out with illness — admitted Gorsline’s effort on the glass was the difference in the game.

The Bulldogs were right there. They had a 25-17 cushion early in the third quarter thanks to a dozen points from Landon Butler and some chilly Spartans shooting.

“We’ve been a team that’s been able to put forth a good effort this season,” Vesey said. “I was more concerned about our execution than our effort. This rivalry is special, so I was kind of expecting us to play with that energy and spirit.”

Bettendorf was undone by 19 turnovers compared to just five for PV. The Bulldogs also were 2 of 7 at the foul line while the Spartans were 10 of 12.

“We feel like we are close,” Vesey said. “We’ve been in pretty much every game this year. We’re just struggling to find the finishing touches right now. We just hope the guys can keep sticking with it.”

PV did Friday, and that was the difference.

Despite missing 15 shots from beyond the arc in the game, the Spartans outscored the Bulldogs 15-5 in the fourth quarter to stay atop the Mississippi Athletic Conference race.

Connor Borbeck and Joel Lawlor led PV with a dozen points each. In addition to his effort on the glass, Gorsline had six points — including two free throws in the final minute to extend it to a three-possession game.

“We got a lot of confidence back that fourth quarter,” Gorsline said. “Our energy and effort was great. We were super-hyped, having fun out there and playing for each other.”

Hillman, who called it a postseason-type game, said it was an encouraging sign the Spartans could still win when top scorer Ryan Dolphin didn’t make a basket and finished with just four points.

“You learn lessons as you progress through your season,” Hillman said. “We do have really good offensive players, but it didn’t happen tonight. You’ve got to find other ways to win.

“Bettendorf played spirited and with a lot of energy, but our guys in the second half showed a lot of moxie and a lot of toughness.”

Pleasant Valley's David Gorsline celebrates during Friday's game against Bettendorf. Gorsline had six points and nine rebounds for the Spartans in their 45-36 victory.