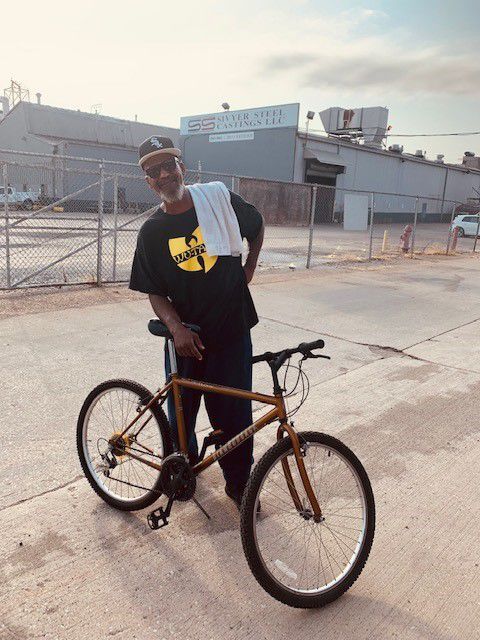 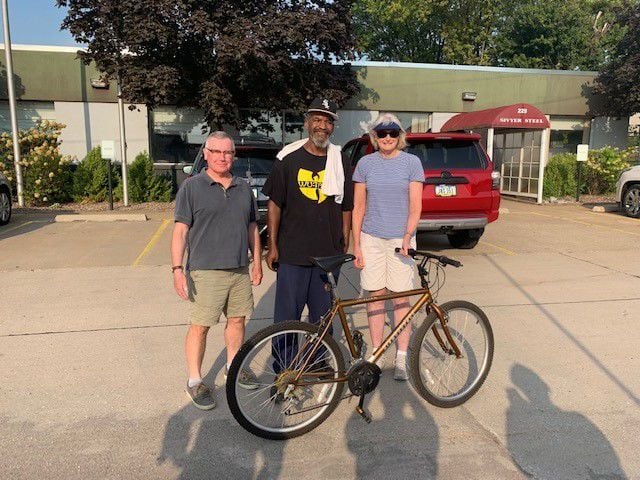 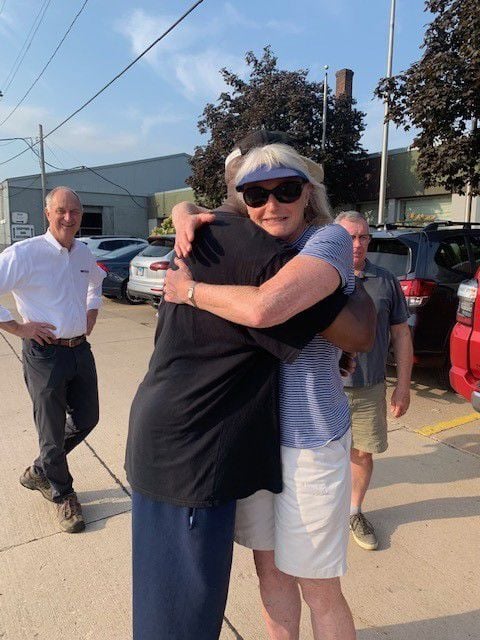 Joe Stewart's new bicycle sat proudly by the steps to his porch. Its brass-colored frame shined in the sunlight, ready to take him wherever he needed to go. Stewart had just used it Friday morning to ride with his grandson to school.

This bike is Stewart's only means of getting around — indispensable for quickly going to work, the store and anywhere else far away. For over a month he was left without a bike after his last one broke.

But a chance meeting with some fellow bike enthusiasts has got him riding again.

Stewart received a free bicycle from the Quad Cities Bicycle Club this week after members learned of him walking back and forth from work every day after a bike malfunction.

"My bike is my transportation," said Stewart, who lives in Bettendorf, "and I appreciate what they did, not knowing me from Adam."

A group of Quad Cities Bicycle Club members was clearing brush along the Riverfront Trail in early September when Stewart happened upon them. The 58-year-old has spoken with them before, he said, and stopped for a conversation.

When club member Kathy Storm noticed Stewart, he was walking down from the highway with a big smile on his face. It was a strange sight for 6:15 p.m., by railroad tracks and a major road, she said, but they quickly hit it off.

It was during this conversation that Stewart revealed his reason for walking — the bike he usually used as transportation to work had broken. Gears on one of the wheels had broke, and as it was the second set he had put on, he said it was a sign to retire it.

That happened in late July, and in the almost two months since, Stewart has walked to his job at Sivyer Steel Castings — a 3-mile round trip. Usually Stewart would go and buy another bike, but the COVID-19 pandemic and other personal challenges made that money needed elsewhere.

"It rode for two years so I can't be mad at it," Stewart said. "It did its job, and maybe in two years I'll be ready for another one."

The club regularly receives bikes donated by people cleaning out garages and basements or who are getting too old to ride, Storm said, and Stewart's bike was one of those donations. They also donate bikes to the Scott County Sheriff's Department and other organizations.

Storm went to Sivyer after meeting Stewart to learn more about who he was, she said, and the idea to gift him a bike went from there.

"He was totally shocked and really excited," Storm said. "He said he could ride with his grandson again."

The club and company were able to surprise Stewart with the bike because he took a two-day vacation at his employer's behest, he said. When he was back he got a call from HR, asking him to come by and that the club had a surprise for him — his new bike.

"I lost my words for a little bit, I didn't want to cry," Stewart said. "I'm just grateful there are people like that out there."

Since Stewart started at Sivyer in July 2011, he hasn't missed a single day. He used to commute from Davenport, and since moving to Bettendorf two years ago he's ridden or walked those 3 miles each day. Biking cuts his commute, usually 20-30 minutes, in half.

Over the years he's traveled to work in all kinds of conditions, and the weather hasn't stopped him yet.

“Joe has been a model employee since the day he started 10 years ago," Sivyer CEO Scott Tinsman said. "Riding his bike every day, originally from west Davenport, neither rain, sleet or snow has ever caused him to miss a day of work. Truly amazing dedication not often seen.”