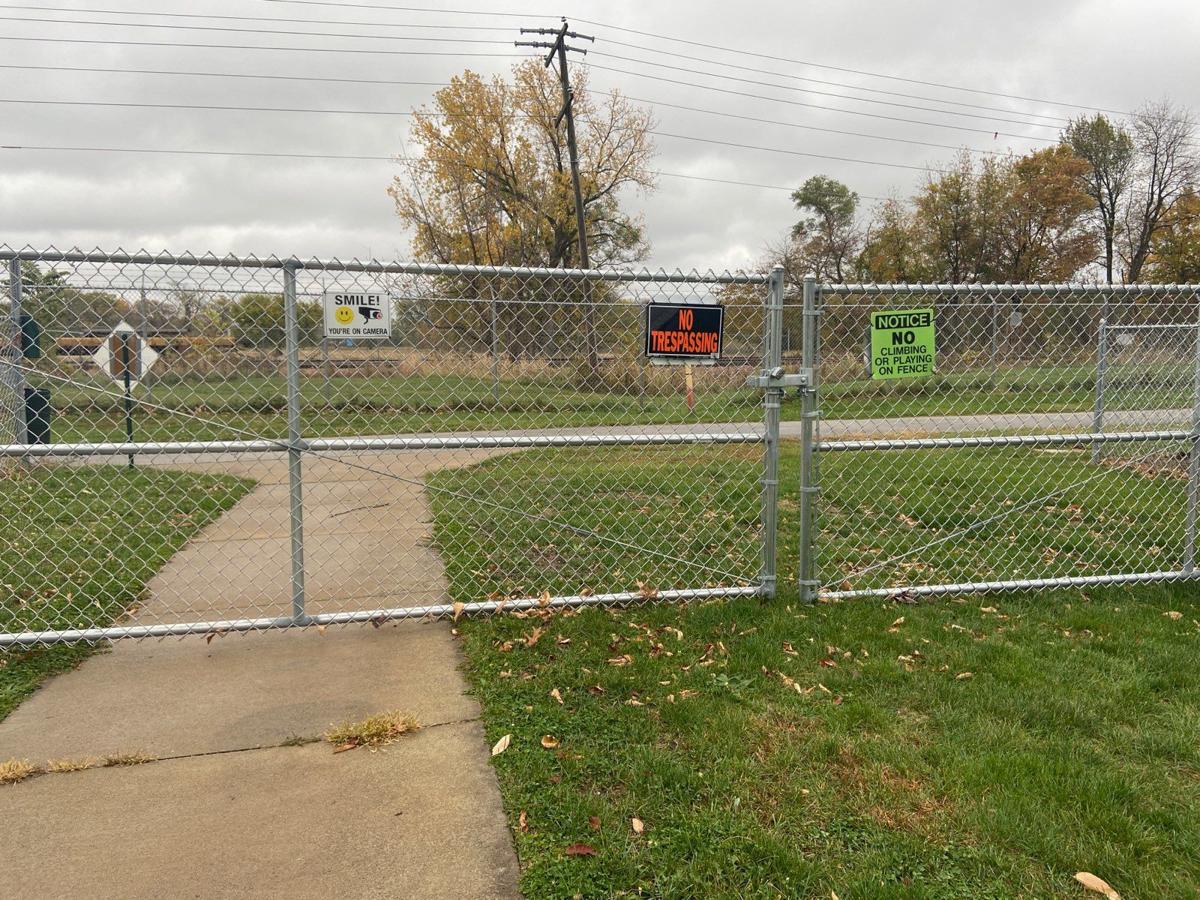 Last year, the city of Riverdale installed a locked chain link gate closing the sidewalk connection between Kensington Drive and the Mississippi River Trail. A Scott County judge has ruled in favor of Riverdale in a dispute over access between cycling trails, and the gate will remain in place. 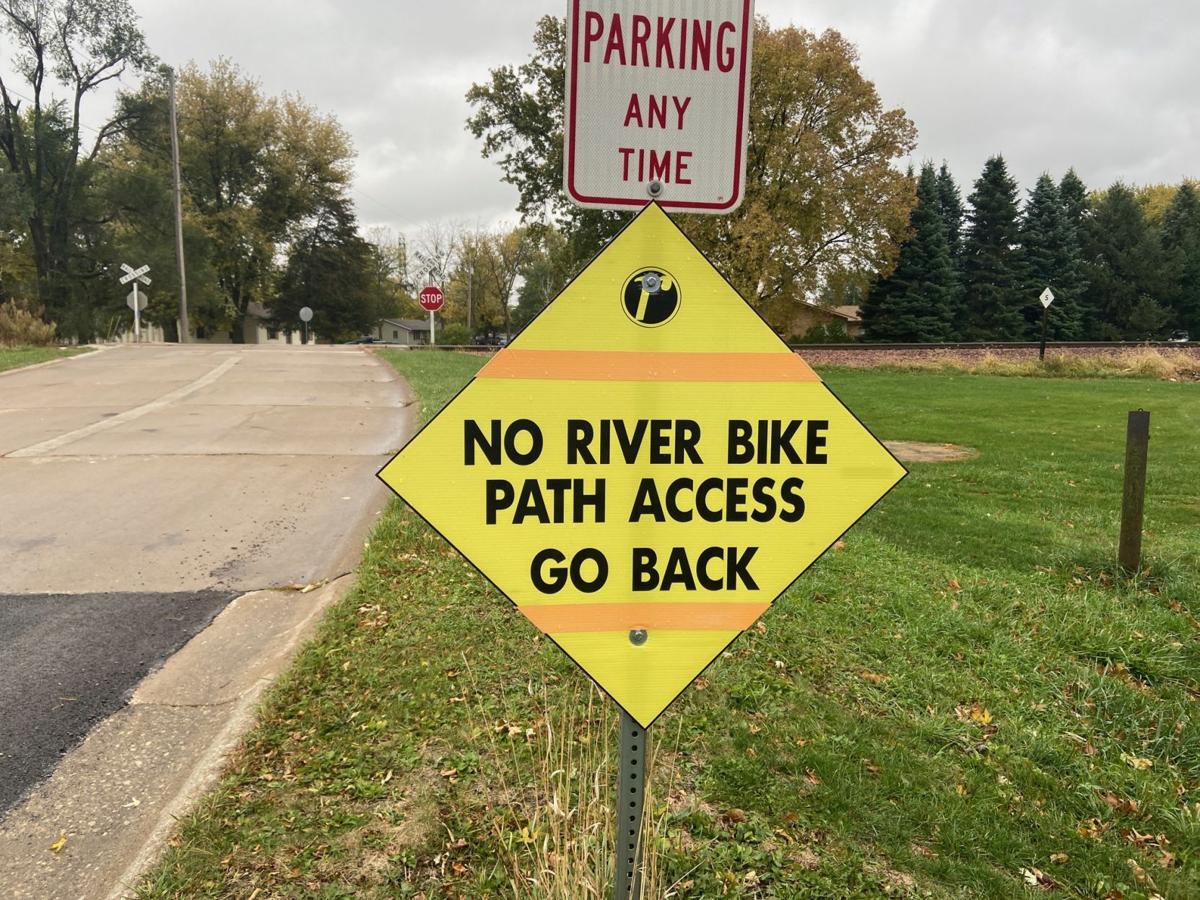 A sign on Riverdale's Kensington Drive warns cyclists that they can no longer get to the Mississippi River Trail from Kensington.

Quad-Cities bike-trail users are appealing a lawsuit decision to the Iowa Supreme Court after a judge ruled in May that the City of Riverdale could keep a gate erected by the city government to block a cut-through between two trail end points.

At the heart of the issue is a path connecting a trail to a neighborhood street people used to move between two bike paths. Neighbors living on South Kensington Street were opposed to people using their street as a short cut between trail heads of the Mississippi River Trail and the Duck Creek Trail.

After neighborhood complaints, the city erected a gate in June, 2020, to block a 30-foot sidewalk leading from the Mississippi River Trail to Kensington Street.

In October, 2020, the Quad-Cities Bicycle Club and the Cornbelt Running Club filed a lawsuit against Riverdale in Scott County, attempting to restore access.

While the access point from the trail to Kensington Street was open, neighbors complained of “incidents of public indecency,” according to a brief filed by the city’s lawyer, including “urination, burglary, theft, assault, vandalism, traffic issues, including high speed chases, disturbances, and other nuisances.” (A lawyer for bike and running activists wrote in a brief these were based on “unsubstantiated hearsay statements.”)

Without the option of Kensington Street, Mississippi River Trail users must continue on the path until it ends near an Iowa Department of Transportation bike-approved intersection at State Street, a highway that trail users can cross to get to the Duck Creek Trail.

Trail users say this is a more dangerous route. The intersection, which has a traffic light, is near Arconic, and sees heavy commercial traffic. A lawyer for Riverdale noted in a brief the intersection meets Iowa Department of Transportation requirements for crossing and no accidents have occurred.

In 2014, The City of Riverdale and Alcoa (now called Arconic) entered into an easement agreement to install and maintain what was called a "sidewalk extension" from the paved portion of South Kensington Street to the Mississippi River Trail, according to a brief filed by an attorney for trail users and a 2014 letter signed by former Mayor Sonya Paddock. When the trail was proposed in 2008, neighbors on South Kensington Street opposed direct connection running through their neighborhood, according to a legal brief filed by an attorney for the City of Riverdale.

The Riverdale attorney stated in the brief that the city closed the sidewalk in part because it "was not designed to accommodate bicycles," and would reduce the city's liability. An attorney for trail users argues the sidewalk constitutes part of the street and putting the fence up is a "nuisance" for blocking off access to a public street.

The dispute led to Bettendorf ending city services, such as snow removal, to Riverdale.

Attorneys for both Riverdale and trail-users told a reporter the Iowa Supreme Court would decide whether to take the case or send it to the Court of Appeals. Neither were sure when that would happen.

Because of the ongoing lawsuit, last week, the Riverdale City Council voted unanimously not to temporarily open the gate Oct. 2 for a bicycle ride across the Quad-Cities that raises money for cancer research, Tour de Brew.

Riverdale Mayor Mike Bawden said everyone was very respectful and commended the cause of Tour de Brew, but council members received advice from their legal counsel recommending not to open the gate because a modification of the council’s position while the suit was under review could confuse matters, Bawden said.

Bawden said some Riverdale residents were upset that the council would consider the action. For Bawden and the council however, he said, a Riverdale bar owner asked the council to consider it so bikers could more easily get to the bar.

“If a taxpayer requests the council to take an action (so long as it isn’t against an ordinance or law) I think we should be able to consider it,” Bawden said.

Last year, the city of Riverdale installed a locked chain link gate closing the sidewalk connection between Kensington Drive and the Mississippi River Trail. A Scott County judge has ruled in favor of Riverdale in a dispute over access between cycling trails, and the gate will remain in place.

A sign on Riverdale's Kensington Drive warns cyclists that they can no longer get to the Mississippi River Trail from Kensington.