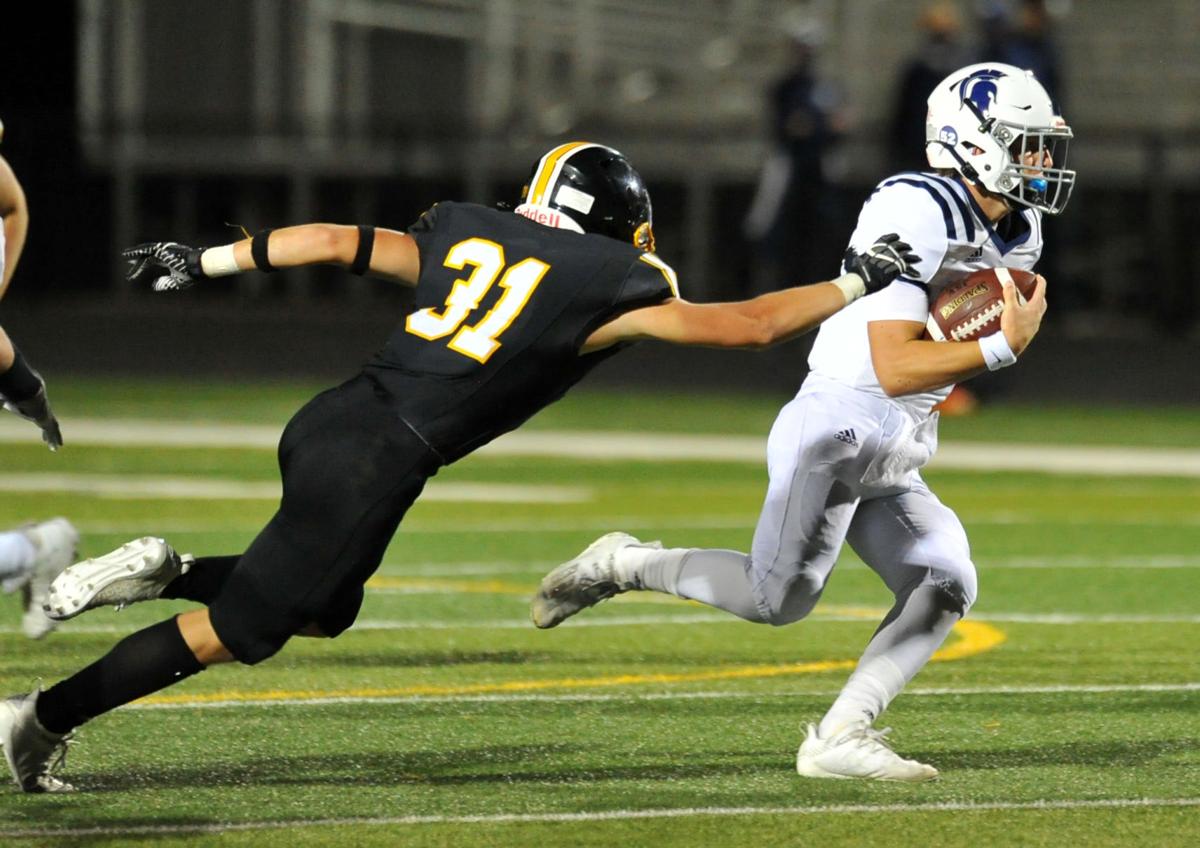 Pleasant Valley quarterback Barrett Lindmark breaks into the open as Bettendorf's Willie Matthys reaches out for him during the first half of Friday's backyard battle. Lindmark rushed for 155 yards on 18 carries to lead PV past Bettendorf 23-6. 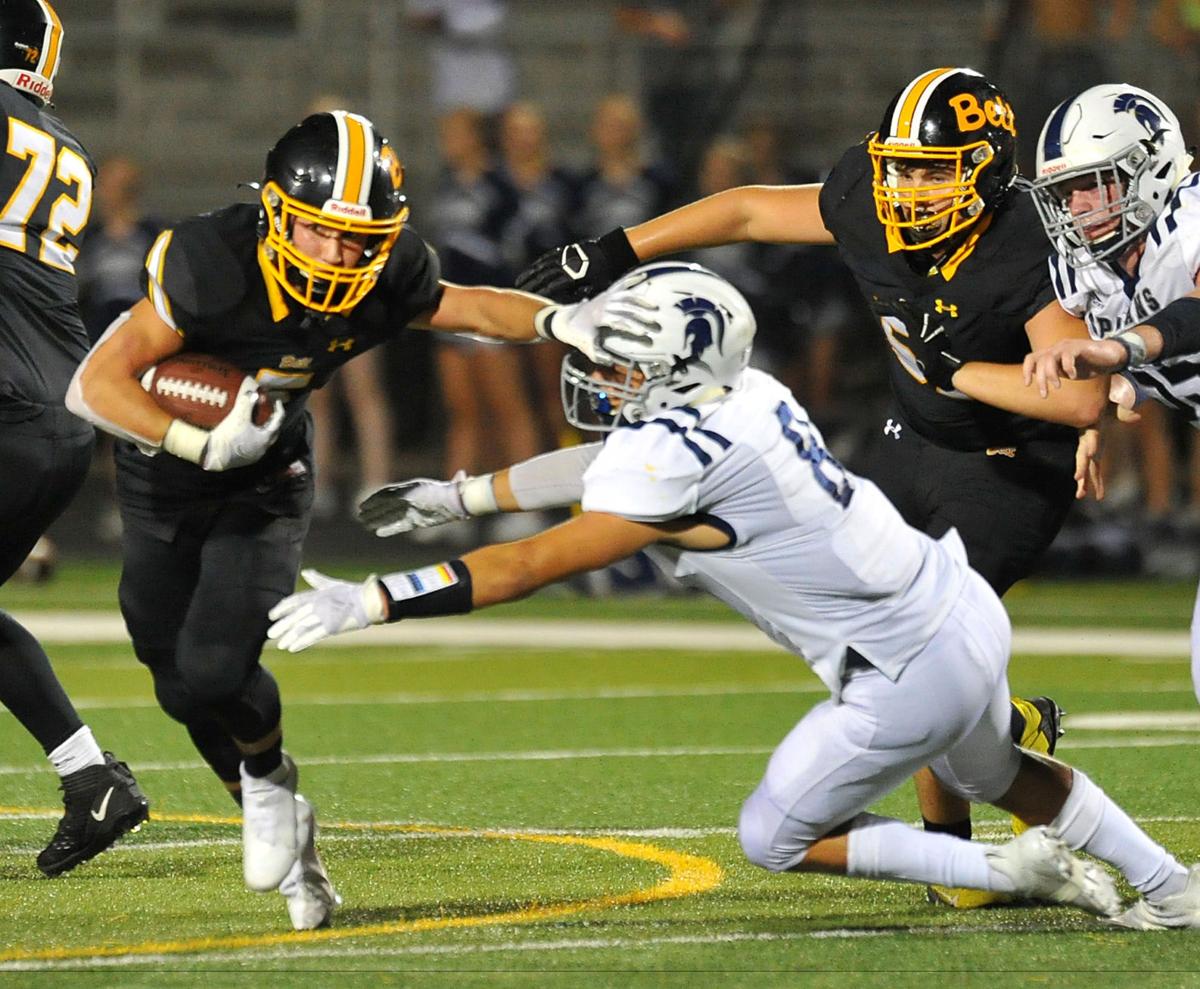 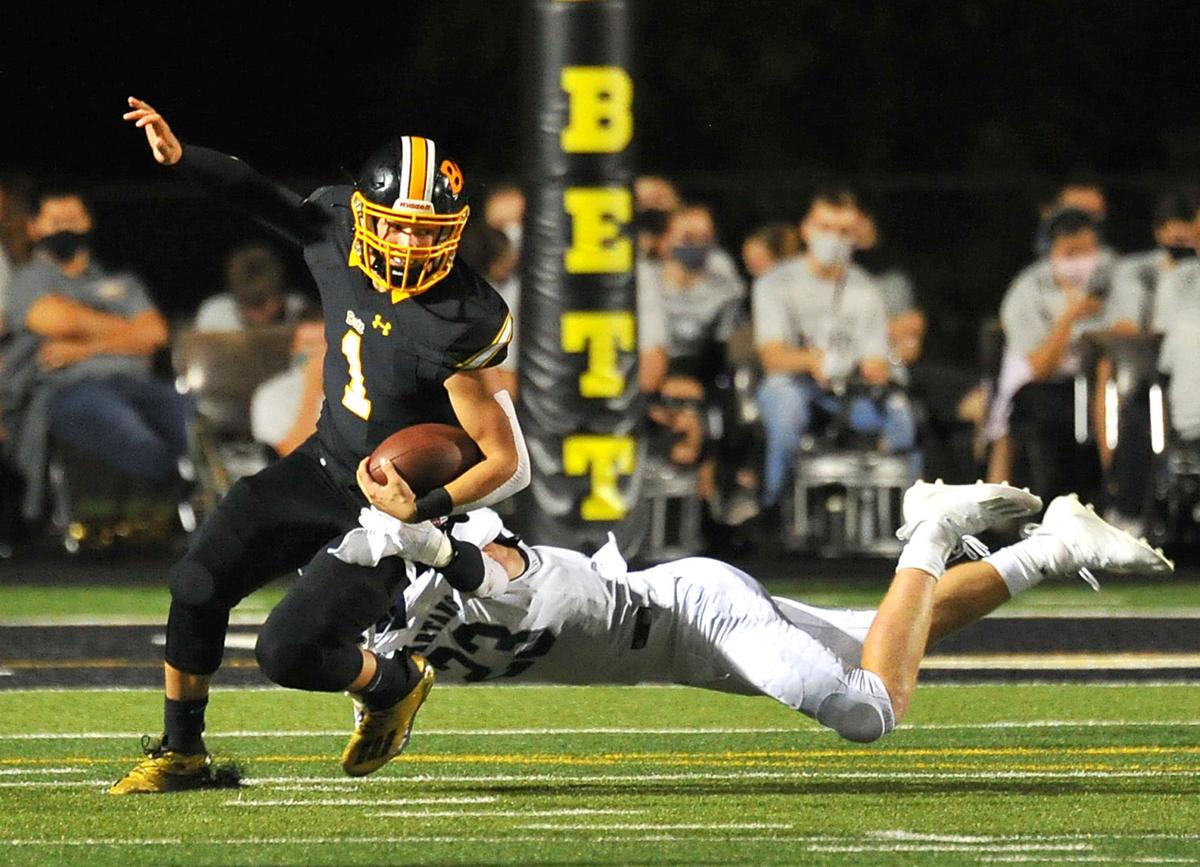 Bettendorf quarterback Zach Garton tries to slip away from a tackle attempt by Pleasant Valley's Matt Mickle in the first half of Friday night's game at TouVelle Stadium in Bettendorf.

A rematch, with much higher stakes, could transpire in several weeks in the playoffs, but PV waltzed into TouVelle Stadium on Sept. 25 and made quite a statement for late September.

Behind a punishing ground attack and a stingy defense, the fifth-ranked team in Class 4A snapped a nine-game losing streak to Bettendorf, 23-6. It was the Spartans’ first victory over the Bulldogs since Sept. 20, 2013.

“This was (seven) years in the making,” PV linebacker Michael Acri said. “There were a lot of guys in the past that wanted this one. We got it done tonight.

“Five-and-oh feels good, but we could see these guys again in November. This is a November team.”

There were no gimmicks. PV did it by controlling the line of scrimmage on both sides.

Coach Rusty VanWetzinga’s squad rushed for 307 yards against a Bettendorf defensive unit which yielded only 38 yards on the ground in its first three games.

“When we are executing at a high level, it is tough to stop,” VanWetzinga said. “As a defense, it is much more demoralizing to watch someone run the ball on you as opposed to passing it.

"We wanted to take away (Kipper)," Bettendorf coach Aaron Wiley said, "but I don't think we took anything away."

After Ryan Cole darted 56 yards for a touchdown on a fourth and 1 play to bring Bettendorf within 9-6 midway through the third quarter, Lindmark called his own number. He reached the second level, slipped through a couple of tackles, spun and raced 61 yards for a touchdown.

“I had great blockers up front, and I knew I had to make big plays in this game,” Lindmark said. “I just happened to find a way to get into the end zone.”

“That was critical because we had momentum back,” Wiley said. “That got it back for them, and they controlled the rest of the game.”

As efficient as PV was on offense, it was exceptional on defense.

With the exception of Cole's touchdown, the Spartans allowed only 22 yards on the ground. The scoring run was the only rush Bettendorf had go for more than five yards.

“Our run defense was not where it needed to be the last couple of weeks,” VanWetzinga said. “Our guys were jacked up to play these guys, and I thought defensively we played really, really well all night.”

The Spartans (5-0) forced the Bulldogs into six punts and limited them to seven first downs, only two in the second half.

“We wanted to show we’re the best defense in the state,” Acri said. “We had a great week of practice and we showed out tonight.

“We had high energy all night and all 11 caps were flying to the ball.”

“This gives us a lot of confidence going into the later weeks,” Lindmark said, “but I wouldn’t be surprised if we see these guys again down the road. We just need to stay confident, stay humble and stay within ourselves.”

For Bettendorf, it is back to the drawing board.

The Bulldogs haven’t scored a point in the first half each of the past two weeks. They also were whistled for 10 penalties, including multiple false-start infractions.

“We’ve got to get better up front on both sides of the ball,” Wiley said. “(PV) has a good defense, but if you’re going to win big games, you’ve got to play against good defenses.

“We’ve got to find some things we can do better on offense and be a little more consistent.”

YWCA has Empowerment Center in Iowa

A warm and inviting environment greets those who walk into the year-old YWCA Quad Cities Iowa Empowerment Center at 1225 E. River Drive, Suite…

During times of heavy rain and Mississippi River flooding, a pump station at Bettendorf's 21st Street near the Isle keeps the downtown from fl…

It was the perfect storm.

Pleasant Valley quarterback Barrett Lindmark breaks into the open as Bettendorf's Willie Matthys reaches out for him during the first half of Friday's backyard battle. Lindmark rushed for 155 yards on 18 carries to lead PV past Bettendorf 23-6.

Bettendorf quarterback Zach Garton tries to slip away from a tackle attempt by Pleasant Valley's Matt Mickle in the first half of Friday night's game at TouVelle Stadium in Bettendorf.