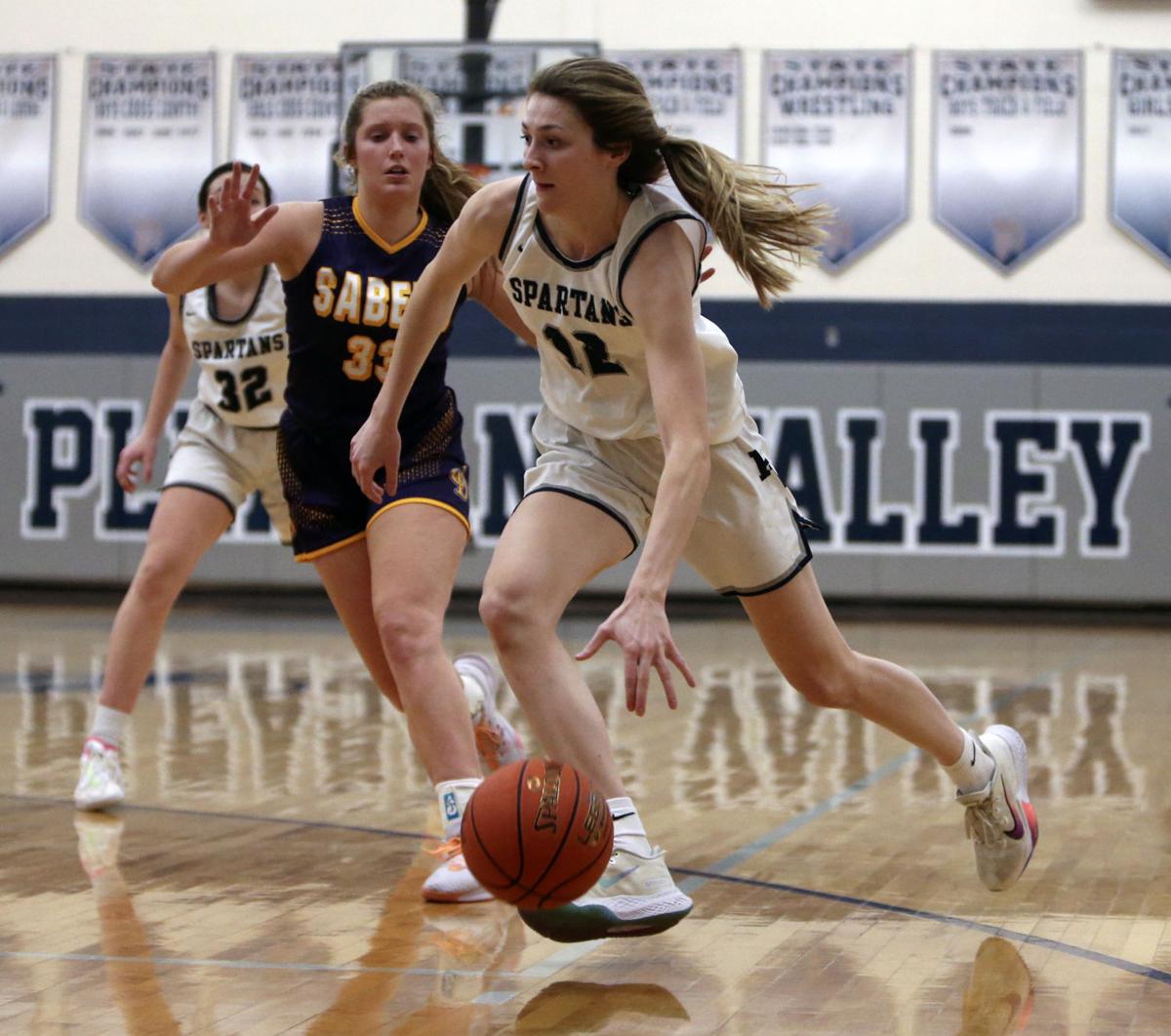 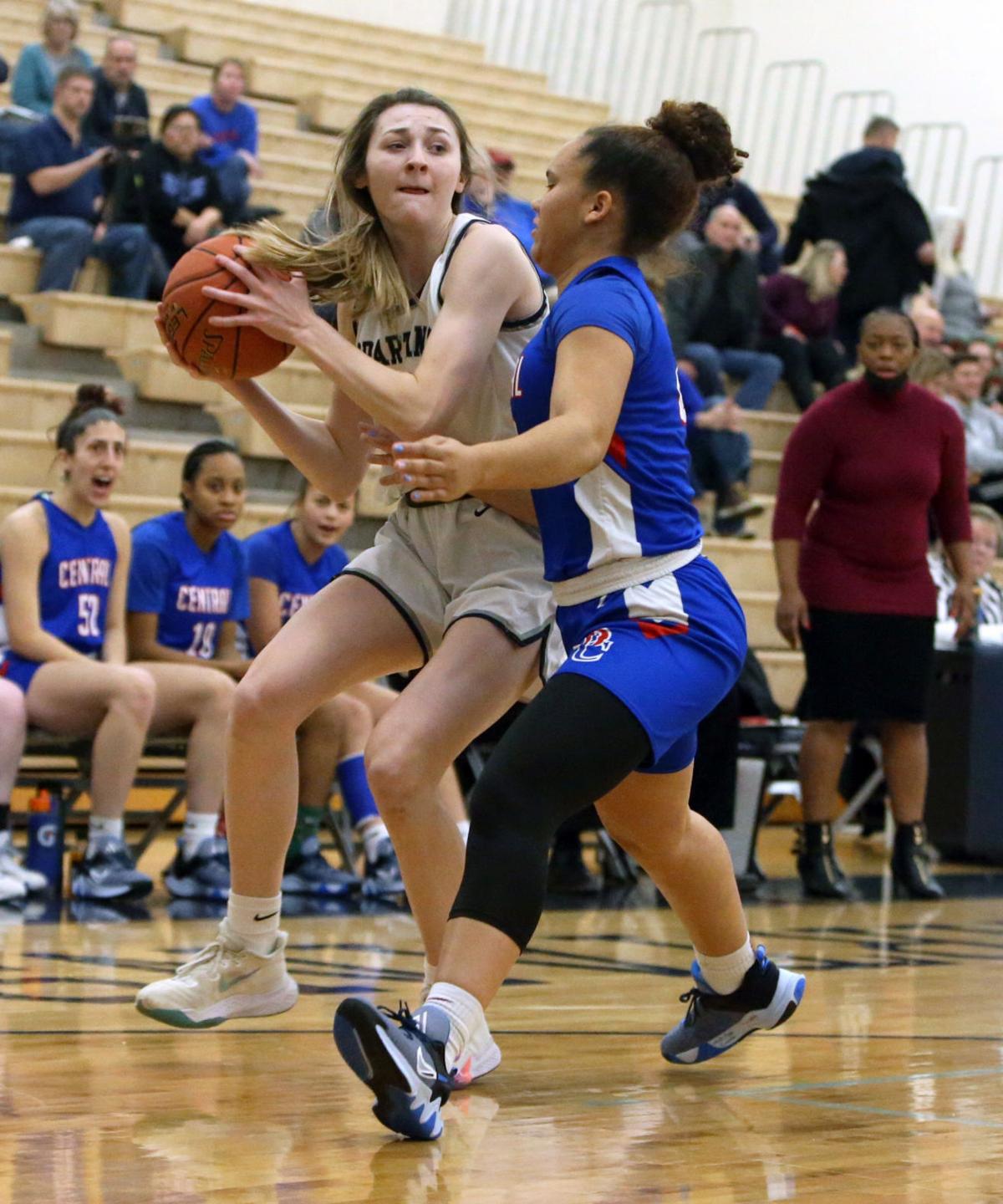 Pleasant Valley's Halle Vice looks to pass while being defended by Davenport Central's Adriauna Mayfield during a MAC game Dec. 21 at Pleasant Valley High School. Vice is averaging a conference-best 19.6 points per game this winter. 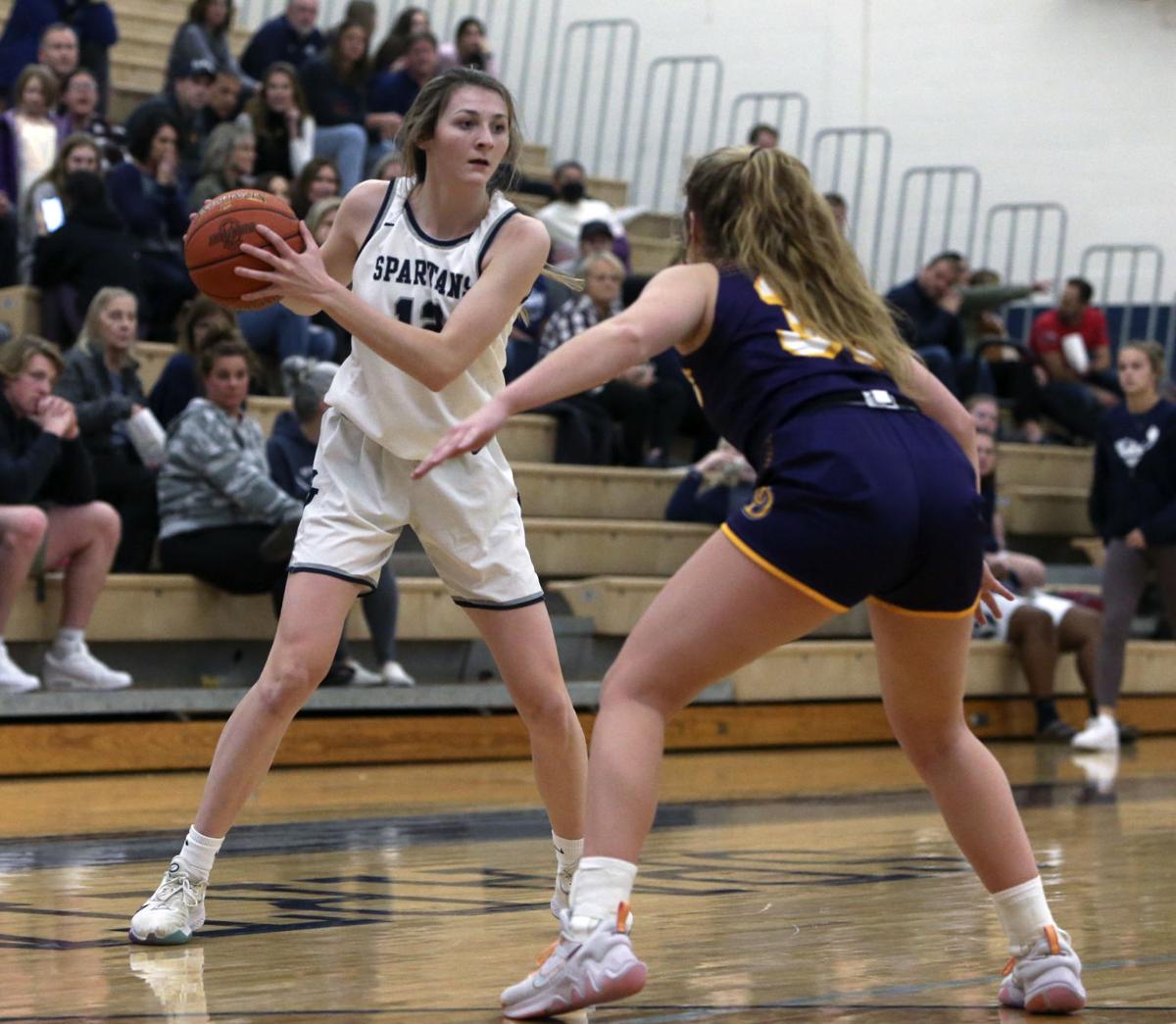 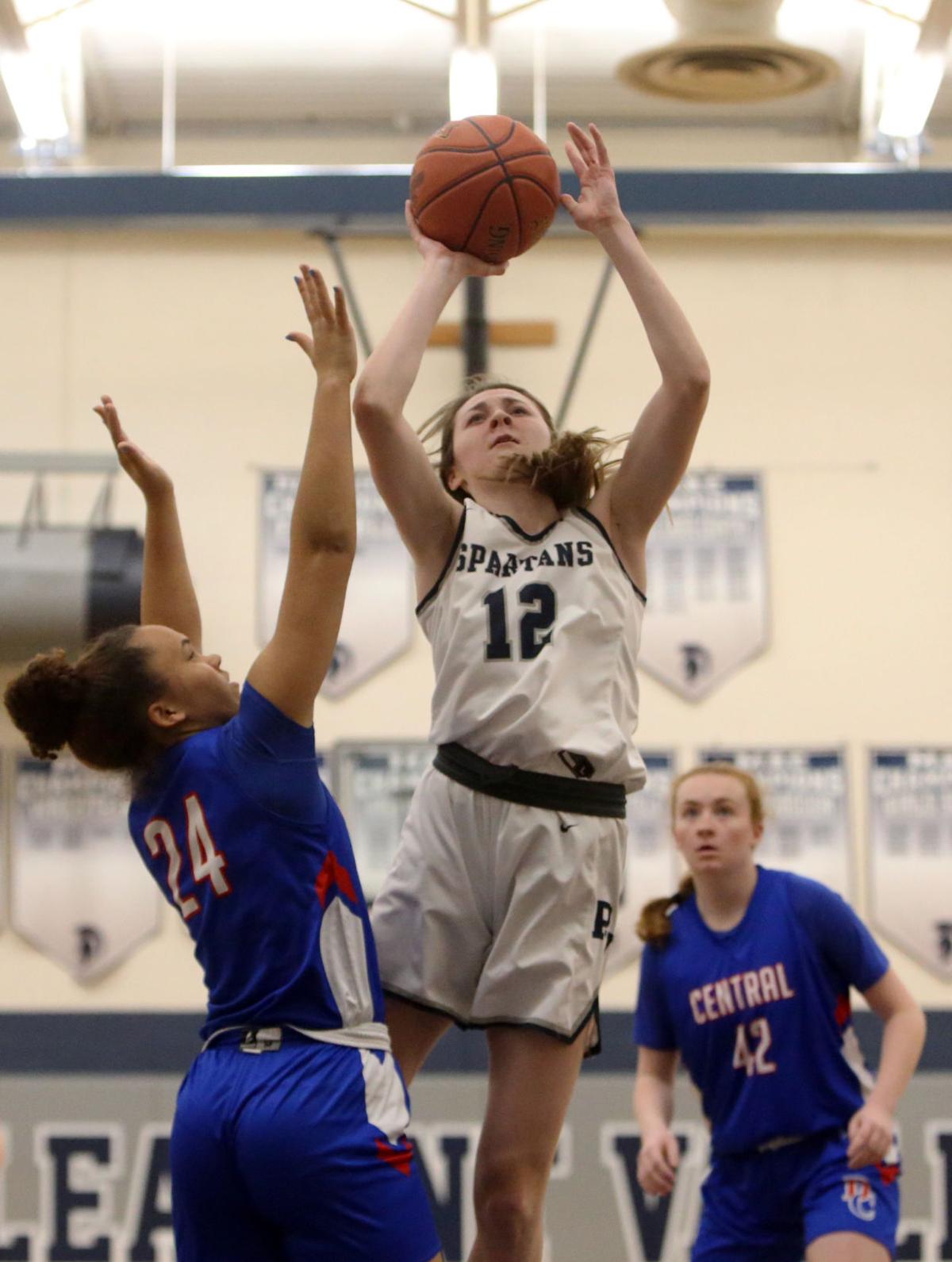 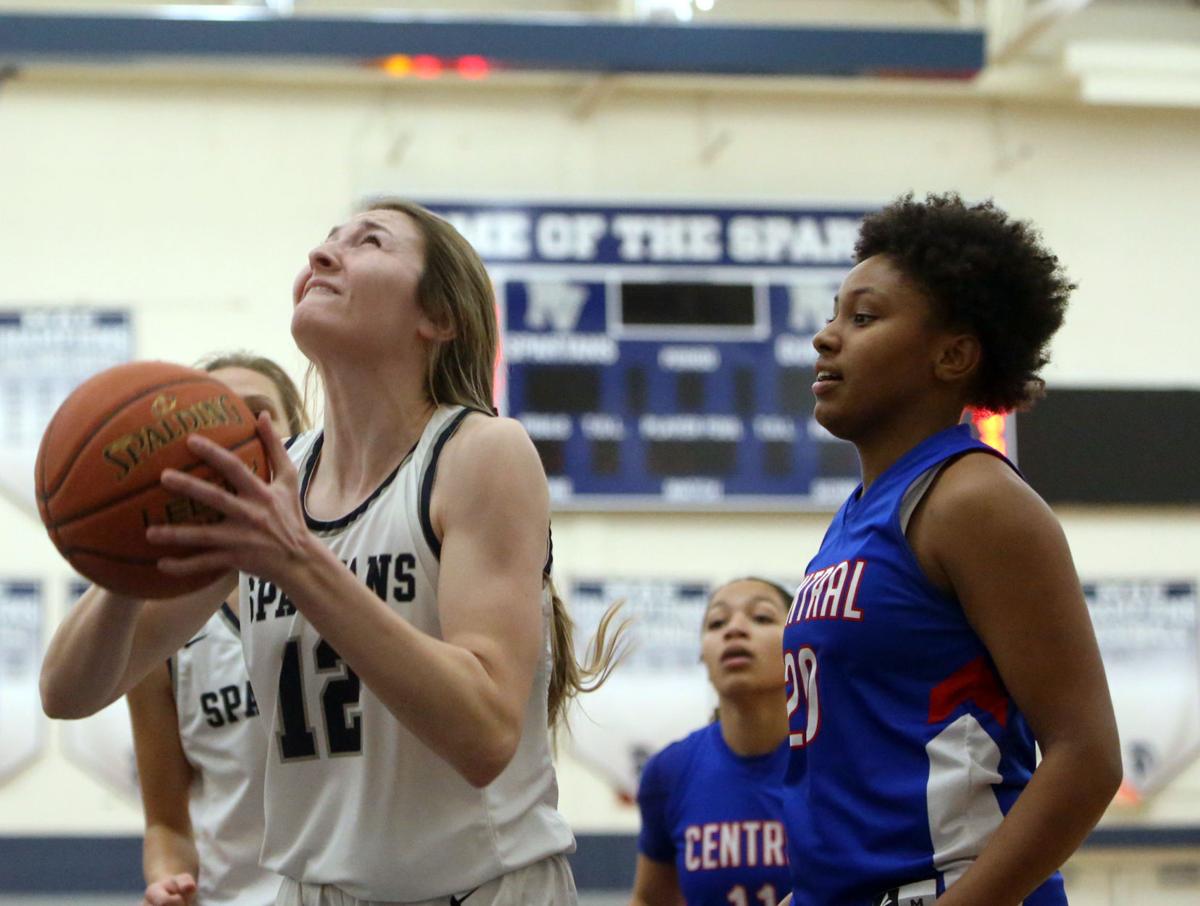 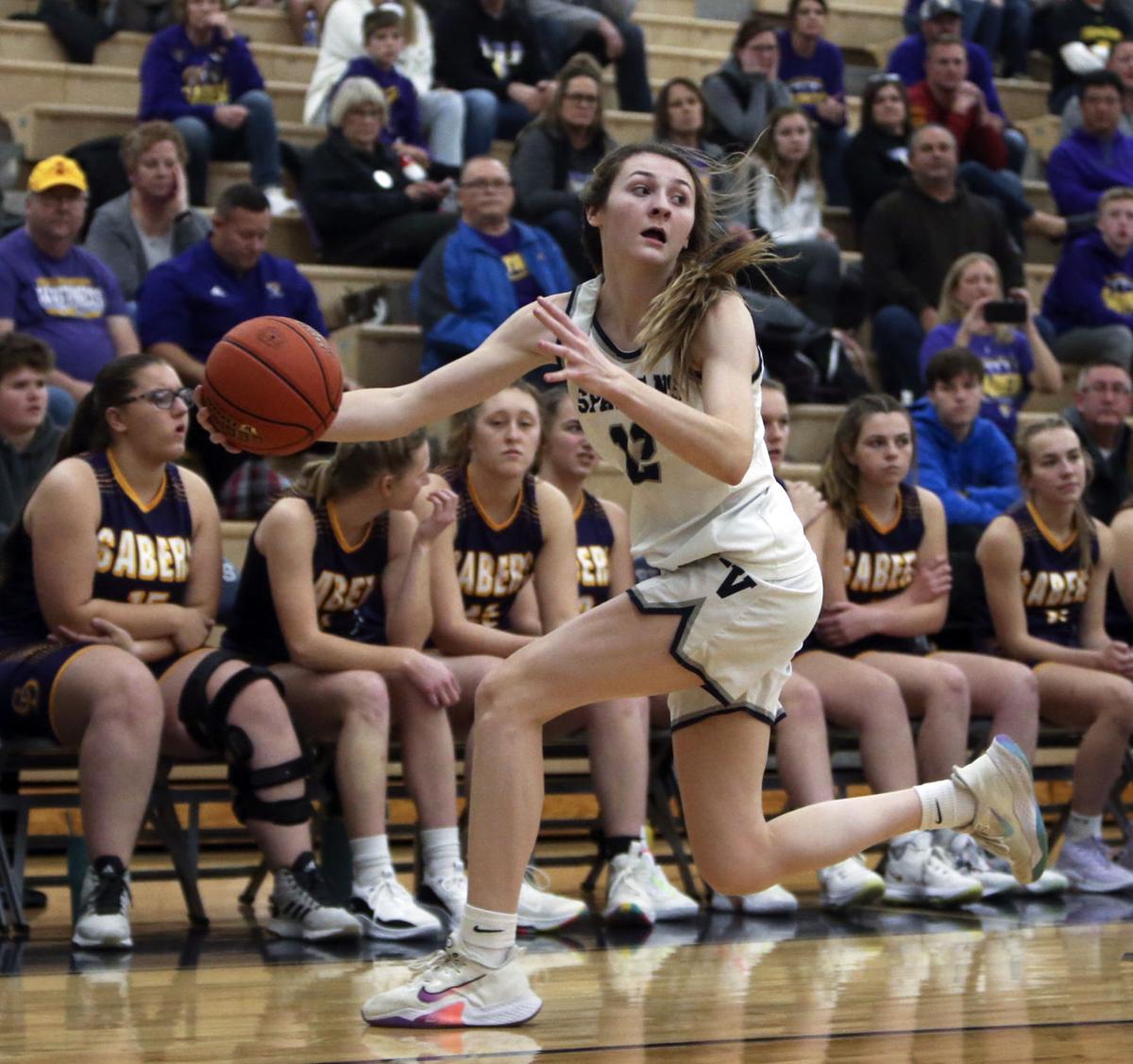 Pleasant Valley's Halle Vice saves a ball from going out of bounds against Central DeWitt during a conference game last month at Pleasant Valley High School.

When the COVID-19 pandemic hit in March 2020 and most schools went to remote learning, Jennifer Goetz had a message for her Pleasant Valley High School girls’ basketball team.

“You have to be in charge of your unseen hours because you’re going to have a lot of those,” Goetz said. “What are you doing when you don’t have teammates there and coaches there?”

Halle Vice went to the gym and worked tirelessly to make herself a better basketball player.

The fruits of her labor are paying off in an enormous way this season.

The 6-foot-1 junior, coming off an all-state volleyball season for the state champion Spartans, is averaging 19.6 points per game — tops in the Mississippi Athletic Conference and fifth best in Iowa Class 5A.

Vice has made a quantum leap this season after averaging 5.4 points per game as a freshman and 12.8 a contest last winter.

“Just expanding my game,” Vice said. “(Shooting) was the part of the game where I thought I needed to get better at.

“I’ve worked on it a lot outside of practice, which makes it more consistent, so in a game it feels like I’m just in the gym shooting.”

Vice was a 20% shooter from the 3-point line as a freshman and progressed to 27% as a sophomore.

Goetz said she’s almost surprised now when a shot from Vice doesn’t drop through the net.

“I know the hours she’s put in — not glorious hours or fun hours for her — to be a good shooter,” Goetz remarked. “She’ll stay after practice and make X-amount of shots. On her off days, she’s in here getting shots up. So when she drops 25 or 26 points in a game, she deserves every ounce of that.”

Vice said she was in the gym about every day during the recent winter break, including Christmas Day and New Year’s Day. Her shooting workouts usually require 300 makes.

Vice has offers from more than a half-dozen Division I programs, including Oklahoma State, Marquette, Northern Iowa and Drake. Iowa has shown some interest as well.

"It was a little bit overwhelming at first, but it is where I want to be," Vice said. "It has always been a dream of mine to go and play at the next level.

"The exposure has definitely helped me."

Vice has a visit planned to Stillwater, Okla., later this month. A college decision could come after PV's basketball season or at some point this spring or summer.

"I just want to stay in the Midwest so my parents can come watch me, but it is about finding a place that is going to make me a better person and a better basketball player," Vice said.

Joining the All-Iowa Attack, a grassroots basketball program out of Ames, has helped Vice get increased exposure.

Each Wednesday during the spring and summer months, she hops in a car with her father and drives to Ames for practice. There are weekend tournaments across the Midwest.

"It is worth it," Vice said. "I wanted to be the best version of myself that I could be and take my game to the next level.

"I'm super glad I joined All-Iowa Attack. Playing against that competition, the best girls in the country, it is a lot more competitive and helped upped my game. I wouldn't be where I am today without them."

Vice had 20 points and seven rebounds last July in helping All-Iowa Attack beat Essence for the 16U championship at Nike Nationals in Augusta, Ga.

She has not slowed down.

"Her confidence level has skyrocketed," PV sophomore Jessie Clemons said. "Her shot has improved greatly and her just staying active over the summer with AAU really helped her a lot and has helped us as well.

"She leads by example."

Vice admitted she was one of the more shy and timid players in the program a year or two ago. But as her basketball skill has improved, her confidence has grown.

"Having that confidence, you come out of your shell a little bit," Vice said. "In the past year, it has been easier for me to be myself a little more."

"Sometimes we use the word 'confidence' so much in sports," Goetz said. "How you get confidence is putting in time and work.

"Halle is so in tune with herself right now and basketball means so much to her. She just carries herself in a way I never would have guessed two years ago."

When Vice came out of the game against Davenport Central two weeks ago with a career-high 26 points and PV in control, she was not flashing a smile or giving high-fives.

Instead, she was asking the coaches why she was turning the ball over frequently on pick-and-roll plays.

"That's her mindset," Goetz said. "She is constantly raising the bar. When you have a player of that caliber raising the bar, it requires everyone else to go along with her.

"I'm so happy for her success. She is only going to continue to climb."

Pleasant Valley's Halle Vice looks to pass while being defended by Davenport Central's Adriauna Mayfield during a MAC game Dec. 21 at Pleasant Valley High School. Vice is averaging a conference-best 19.6 points per game this winter.

Pleasant Valley's Halle Vice saves a ball from going out of bounds against Central DeWitt during a conference game last month at Pleasant Valley High School.