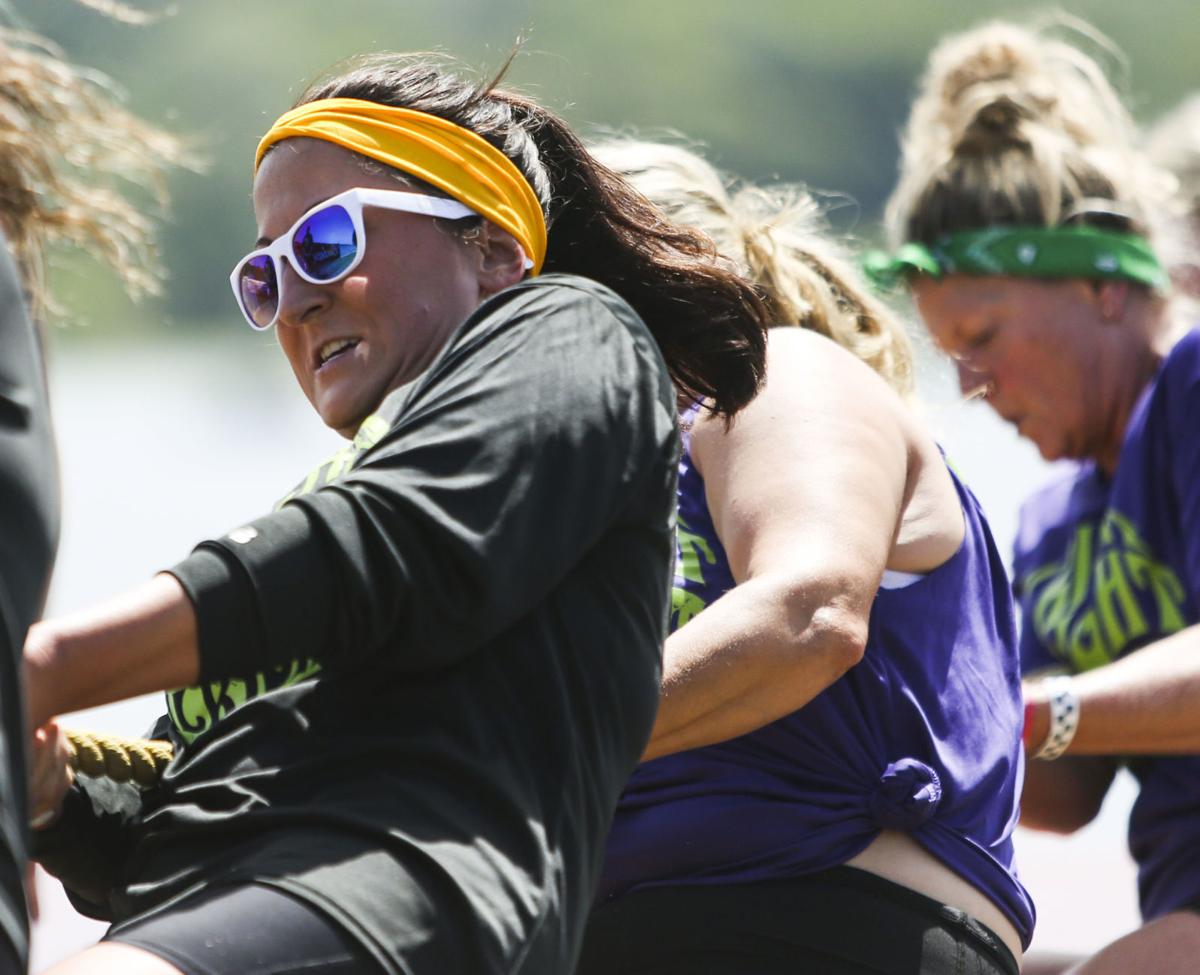 Alycia Kuberski helps pull against an Illinois team on Saturday. 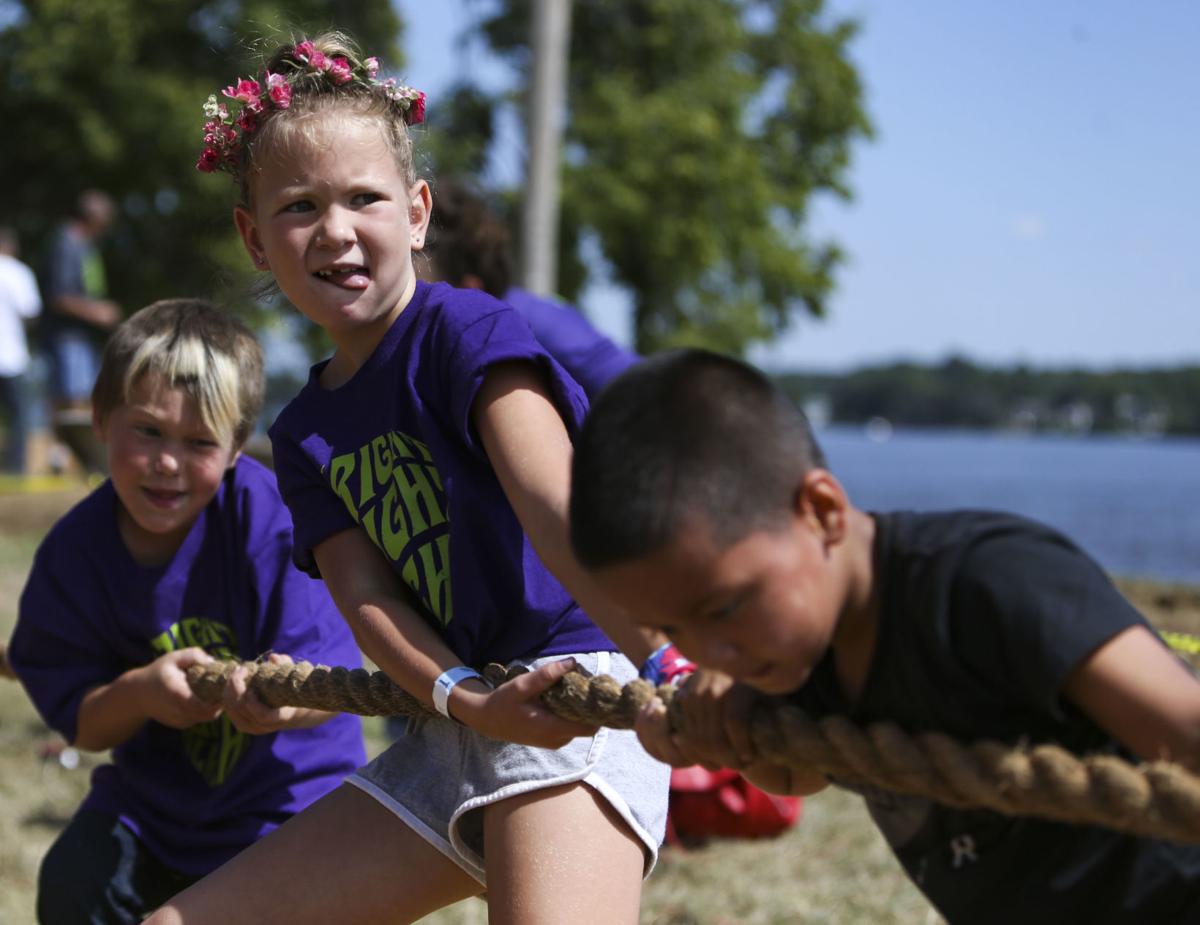 Lyla Christy of LeClaire pulls in the Kids' Tug of War on Saturday. 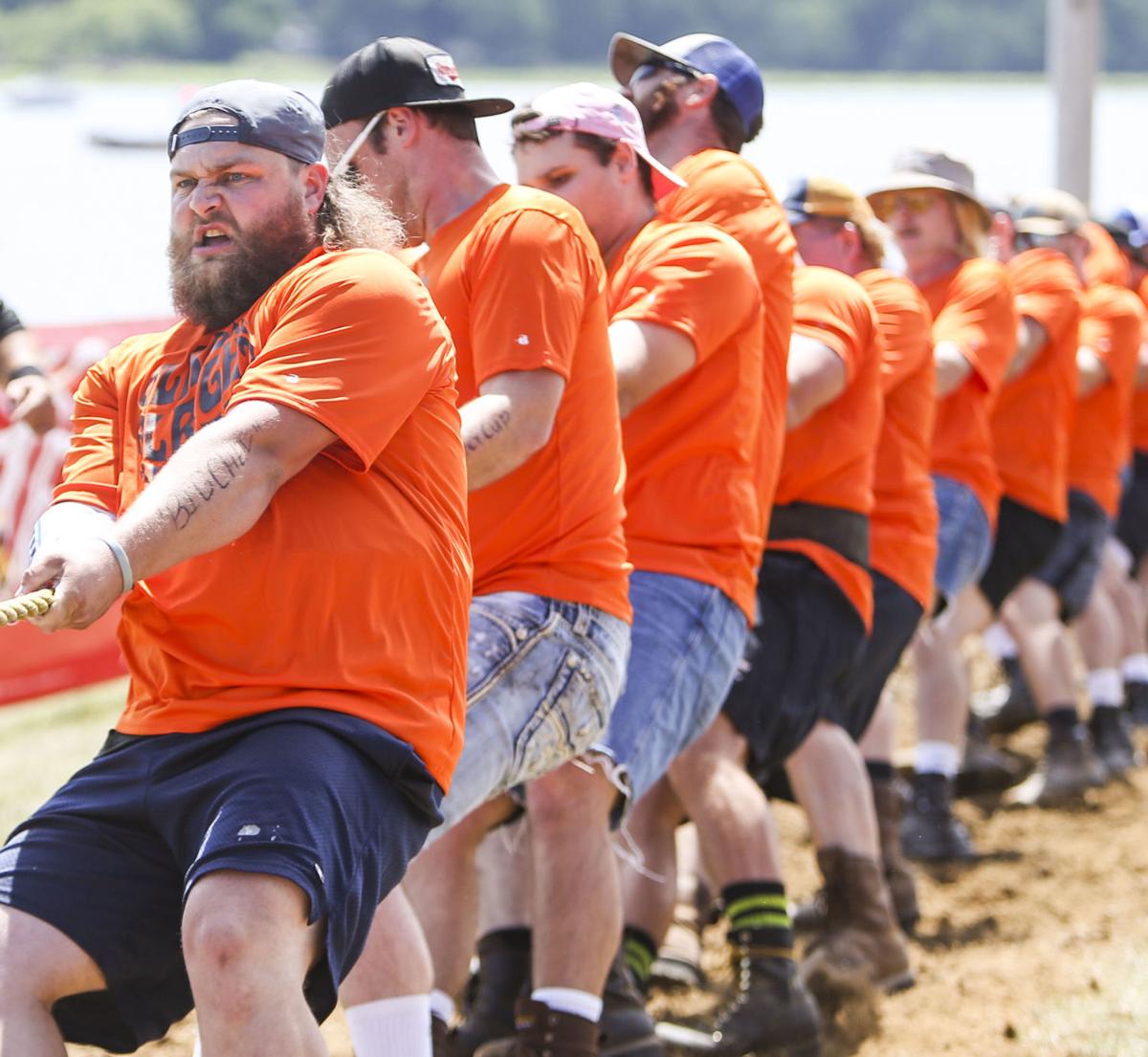 Devin Allbee, of LeClaire, and his teammates pull against an Illinois team on Saturday during the annual Tugfest event held in LeClaire and Port Byron. 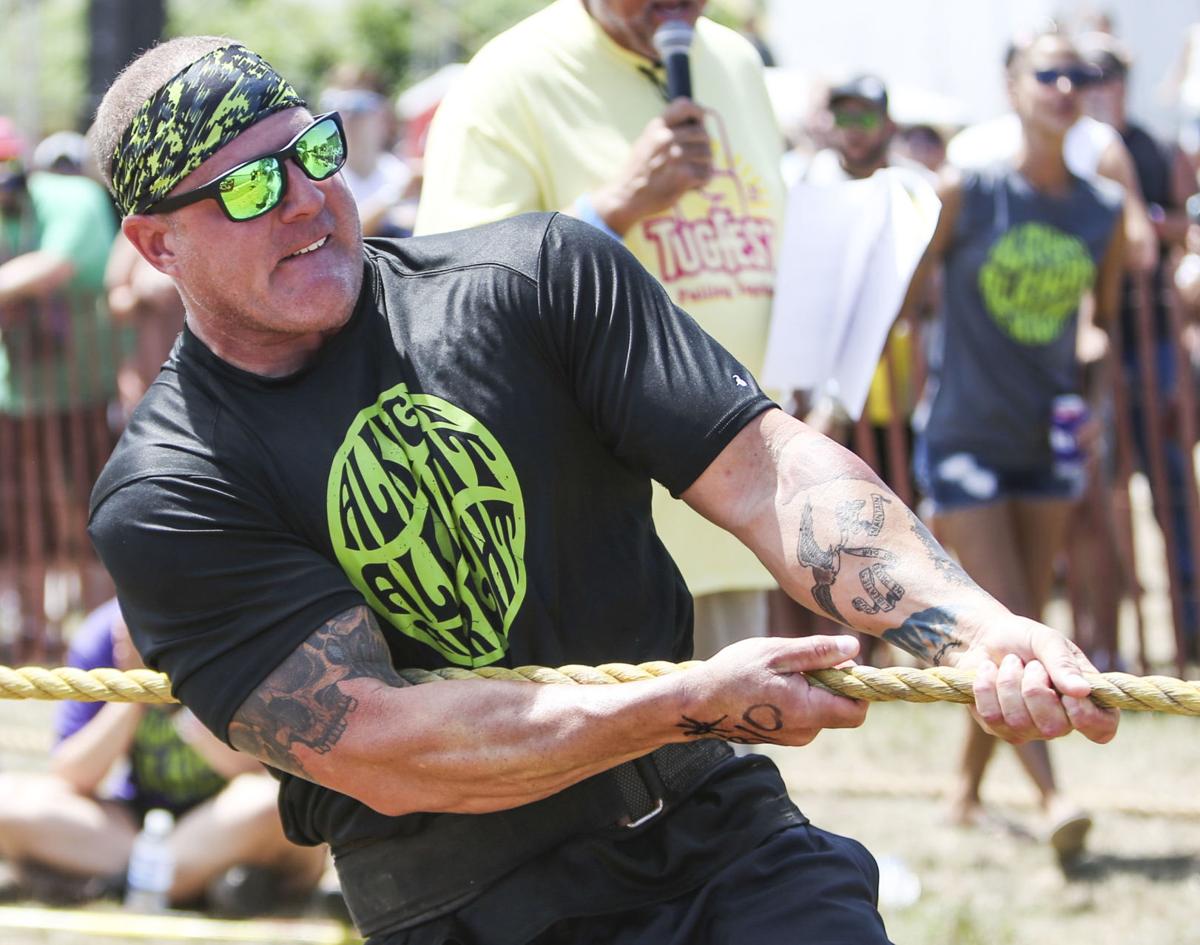 Jeff Thoene of LeClaire pulls against the Illinois side, Saturday.

When the signal came Saturday, the file of orange-shirted men in LeClaire rushed backward, all pulling the thick rope that connected them to the opposing tug-of-war team in Port Byron across the Mississippi River.

As many hundreds of pounds of humanity flexed and struggled, the drifting, slack curve of gold-brown rope floating on the river suddenly skated across the water like a skipped stone, straightening beneath the teams’ opposition.

The Iowa team’s motion slowed as the resistance on the other end increased, but the men continued pulling, their boots stomping and digging furrows into the dust and their upper torsos straining as they worked their way backward.

“Hopefully we are going to see an Iowa win,” Kari Long, president of the Iowa side of Tugfest, said just before the contest began. “Our guys and girls have been practicing very very hard.”

Both sides work hard to make the event happen, and Saturday was all about the teams, she said.

There were 11 three-minute bouts scheduled, and the side who carried the most of them (Illinois by an 8-3 count, according to their Facebook page) takes home the trophy and keeps it for the year. That trophy is an alabaster eagle statue.

The results of Saturday's contest are available on the Tugfest websites and Facebook pages.

When that time had elapsed during the first, the team in LeClaire settled on the ground over which they’d just struggled.

“The hardest three minutes of your life, I’m not gonna lie, but it’s well worth it,” Devin Allbee, captain of that first Iowa team, said afterward.

Allbee, of LeClaire, said participating in the event was a great, fun experience.

“The nice thing is, it’s the only event in the country that gets a major river shut down for three hours,” he said. “So it’s a one-of-a-kind event, so it doesn’t hurt to ever try to say you’ve done it.

A short time earlier, children had a go at the contest. Though smaller in scale, the effort was no less. The kids shouted and grimaced as they fought for every inch of ground.

Emery Flockhart, 8, of Davenport, said her first bout was kind of easy. The second, though, was tougher — her team’s opponents made it feel as if there was an adult pulling on the rope.

He said he was hoping to get youth interested in tug of war. It’s a fun, healthy fitness sport.

There were other activities at the event Saturday — carnival rides, music and food.

“We have had a phenomenal weekend so far,” Long said.

She said she was not sure how many people had visited the 2021 event as of Saturday.

“But this levy has been jam-packed both Thursday and Friday night,” she said. “We’ve had record crowds.”

Bettendorf Library's drive-up window to be closed for three weeks

The Bettendorf Public Library's drive-up window and delivery lane will be closed starting Friday to accommodate the placement of an HVAC unit.

City of LeClaire paid $222,373 to email scammers posing as vendors

Scammers posing as three legitimate vendors emailed the City of LeClaire, requesting the city use a different bank account for payments. From November to February, $222,373 in LeClaire city funds were directed to scammers' accounts. More than half was recovered, but the city is still out $102,000.

Julia and Bryce Flaherty opened the winery in May and are already seeing plenty of repeat customers.

Chris Zubroski, president of Donohoo Steel Treating, often uses the phrase “back in the day” when talking about the Bettendorf company that is…

Bettendorf alderman selected to Rotary District 6000 Board of Directors

Alycia Kuberski helps pull against an Illinois team on Saturday.

Lyla Christy of LeClaire pulls in the Kids' Tug of War on Saturday.

Devin Allbee, of LeClaire, and his teammates pull against an Illinois team on Saturday during the annual Tugfest event held in LeClaire and Port Byron.

Jeff Thoene of LeClaire pulls against the Illinois side, Saturday.