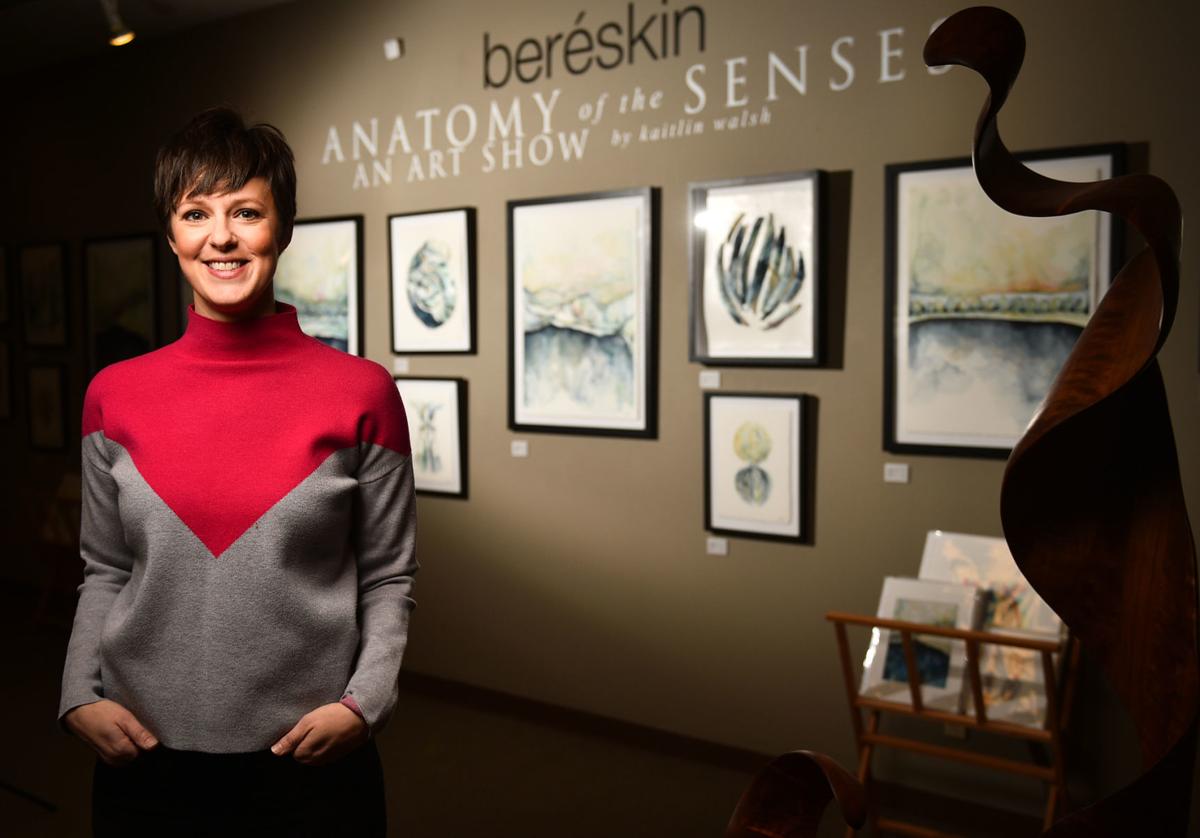 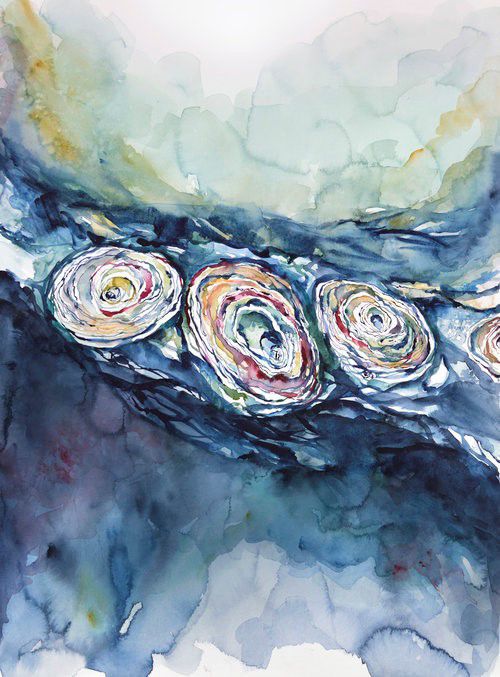 This is one of Kaitlin Walsh's paintings. 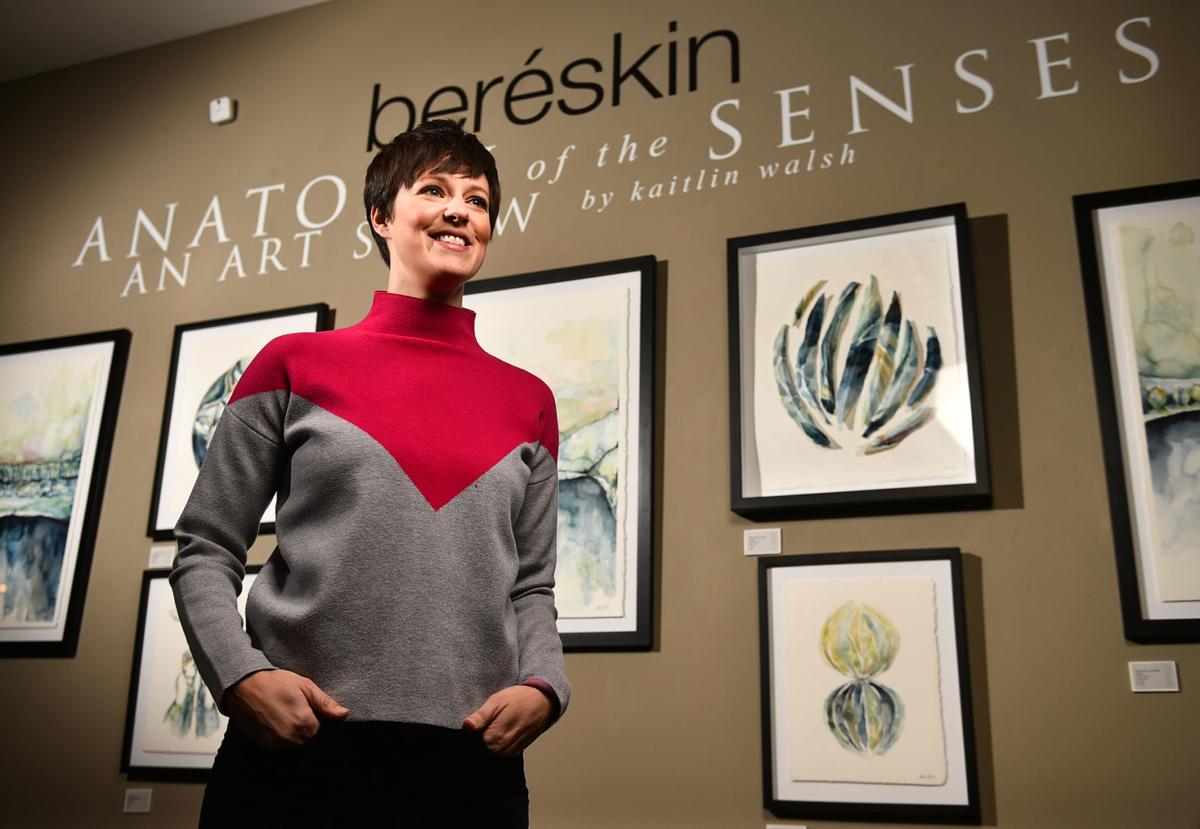 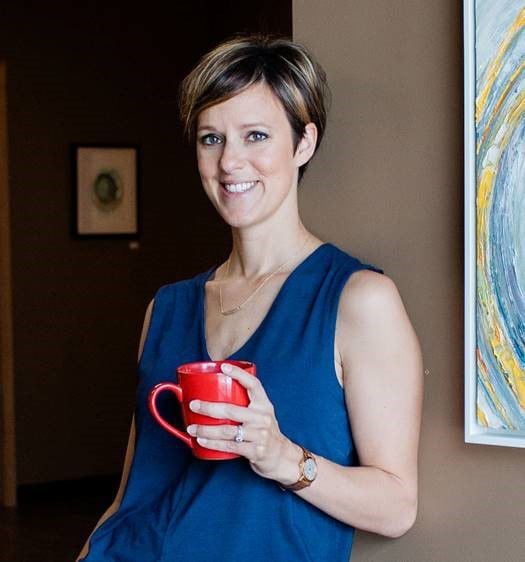 She recently completed the first large exhibit of her 2-D and 3-D paintings at Bereskin Gallery & Art Academy, 2967 State St., Bettendorf, and several of her pieces will be on display through April in the hallway between the RiverCenter and Adler Theatre lobby, 136 E. 3rd St., Davenport.

"Her work is not only inspiring but educational and esthetically pleasing,” gallery owner Pat Bereskin said recently, noting she'll be teaching abstract watercolor on Thursday nights in April. “Her positive energy and enthusiasm for the arts made for an excellent match with our programs. I'm so excited."

From a young age, Walsh was fascinated with both art and science. She's now 34, and her mom and sister are physical therapists; her dad is an eye doctor; and her husband, Marty, is an oral surgeon.

In school, she studied medicine and art. At Marquette University, she majored in advertising with a biology minor. She earned a master's degree in biomedical visualization at the University of Illinois at Chicago, which offers one of just a handful of such programs nationwide.

“It’s pretty rigorous,” Walsh said. “You have to have so many art classes and so many science classes.”

Most graduates work for drug companies, doing animation and illustrations, she said. “Even in commercials, you’ll see quick animations for how medications work in the bloodstream, or patient education videos. People are willing to pay big money for good animation.”

In early 2012, right after Walsh and her husband married, and he did his residency at Travis Air Force Base in northern California, she became pregnant.

“We knew early on he was very small,” Walsh said of her oldest son, Henry, noting she had “placental insufficiency,” and he was born at 30 weeks, weighing 2 pounds, 5 ounces. He was in the neonatal intensive care unit for 72 days.

“It helped me focus on what was going well, so that helped me find the joy,” Walsh said of painting. “It was months and years — to this day — of just angst, what the long-term effects may be. That’s where painting helped me. It made me marvel; my whole life I’ve marveled at anatomy. I’ve loved it. It was a way to output my appreciation for what was going well.”

“For some reason, it soothed me,” she said. “It helped me learn more and more. I’ve always had a passionate love for anatomy. It took me a really long time to paint NICU (neonatal intensive care unit) paintings. I get commissioned to do embryo paintings, and a lot of paintings like 'first touch of babies.' That what was hard for me, to do super-small preemies. But now it’s fine.”

“It was a scary, demanding and traumatic time,” Walsh wrote on her website, lyonroadart.com. “In the hospital, we had to learn to appreciate the physiological aspects of my son that were performing correctly, rather than fixating on problem areas. We learned to appreciate the hard work of nurses, doctors and therapists, as well as the never-ending support of friends and family. To this day, I am presented with reminders of how much worse it could have been, and I take a moment to be thankful for my children's current health and well-being.”

Her other two pregnancies were normal, and her youngest, Tommy, is now 2, and daughter Rosie is 5. “They’re just a joy — they’re more a joy than painting, and I can’t give them a higher compliment,” Walsh said. “My soul just wants to be painting.”

Marty worked as an oral surgeon in Omaha, and they moved to the Quad-Cities last June for his job at Spring Park in Davenport.

She has been selling her art on Etsy since 2015, and Walsh is in the top 1% of Etsy sellers. She has sold 15,000 prints of her anatomical fine-art paintings. Many reflect specific cells of eyes, ears, taste buds and nerves.

“The idea behind it is our senses are a gift, a lovely gift, but they’re often wasted — not used for good things, putting bad things in front of our eyes,” she said. “That’s why each has a high and low or light and dark. We can take the gift of the senses in one of two directions.”

Some of her works are 3-D pieces made with raised paper, glue and heavy varnish. “It bothers that watercolor is not seen as an intense medium,” Walsh said. “I wanted to do something more structural to show what watercolor could be, if you give it a little bit of love.”

She won first place at the Rock Island Art Guild in early February with a painting of the temporal bone in the skull, and she’s working on a series of all the bones in the skull and later will do bones of the hands and ribs.

Many of her customers work in the medical field, and others have gone through health hardships, including fertility issues.

This is one of Kaitlin Walsh's paintings.