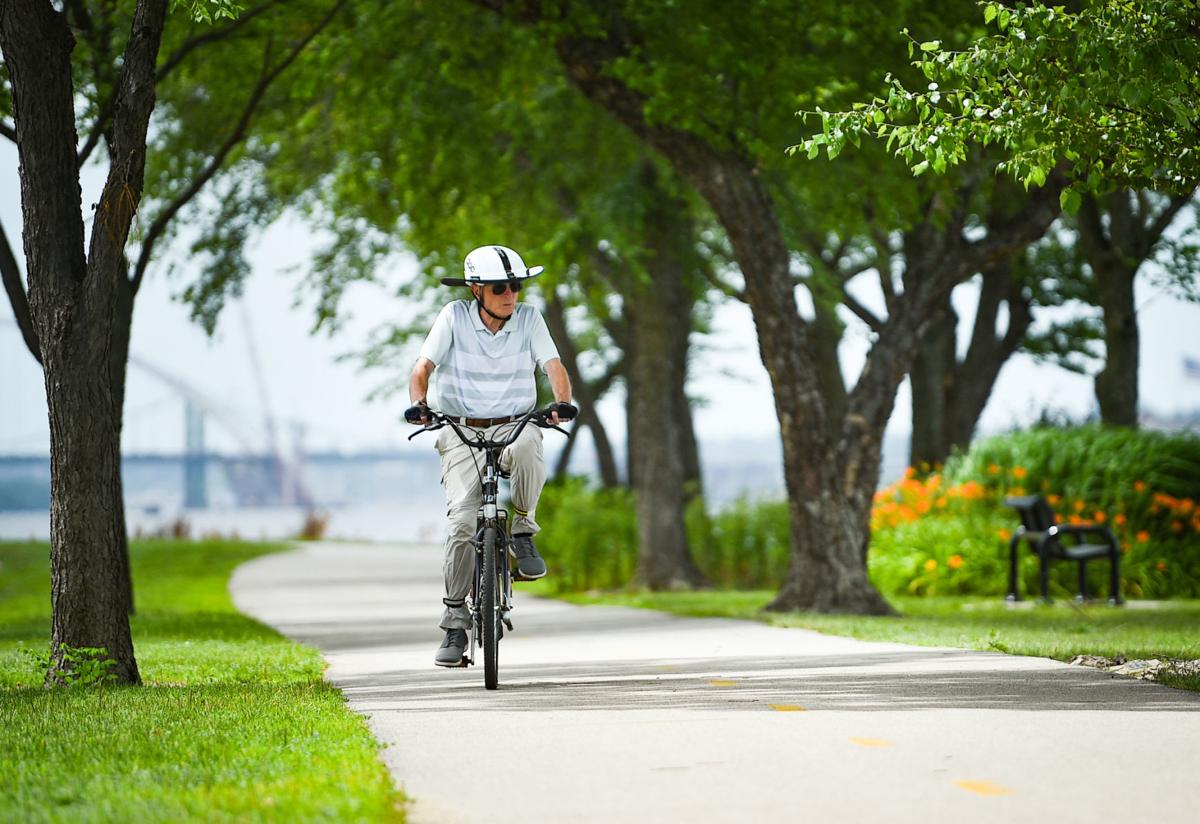 Ralph Horton, of Moline, rides his bike along Ben Butterworth Parkway Monday, June 29, 2020, in Moline. There's been a surge in bicycle sales since the pandemic started, as people look for activities that allow social distancing. 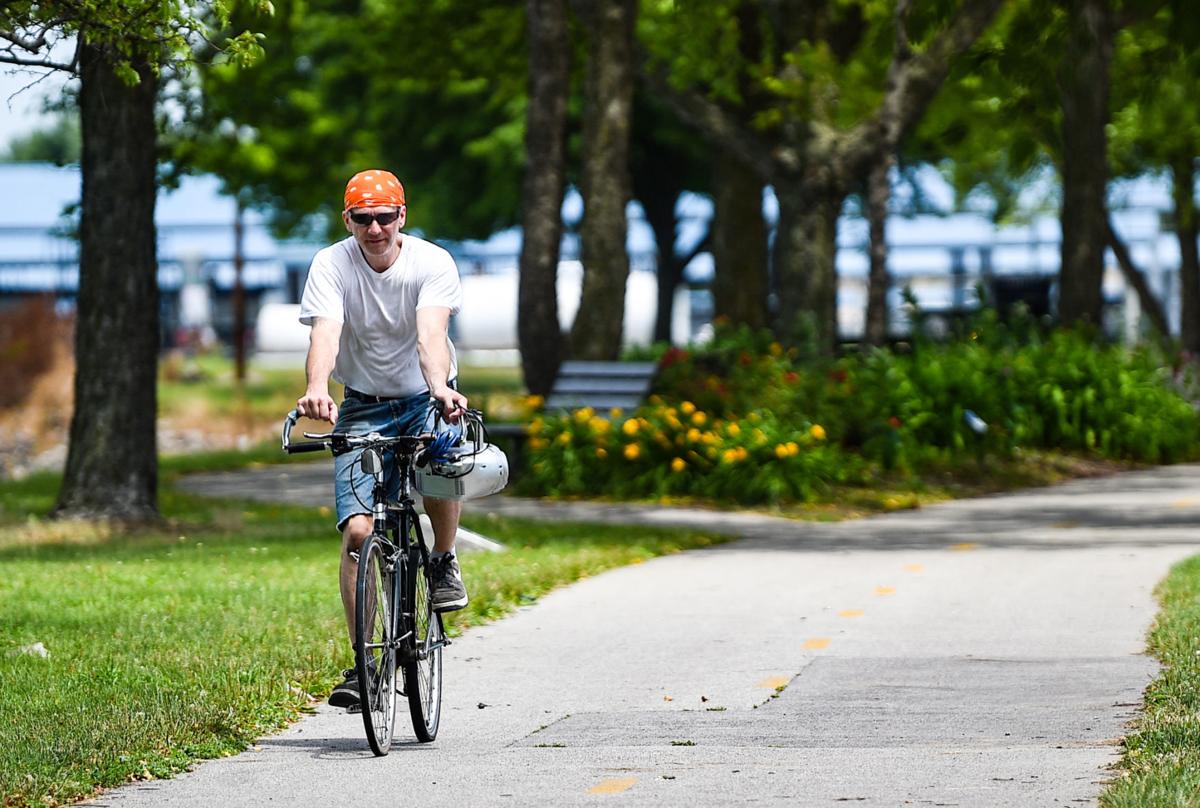 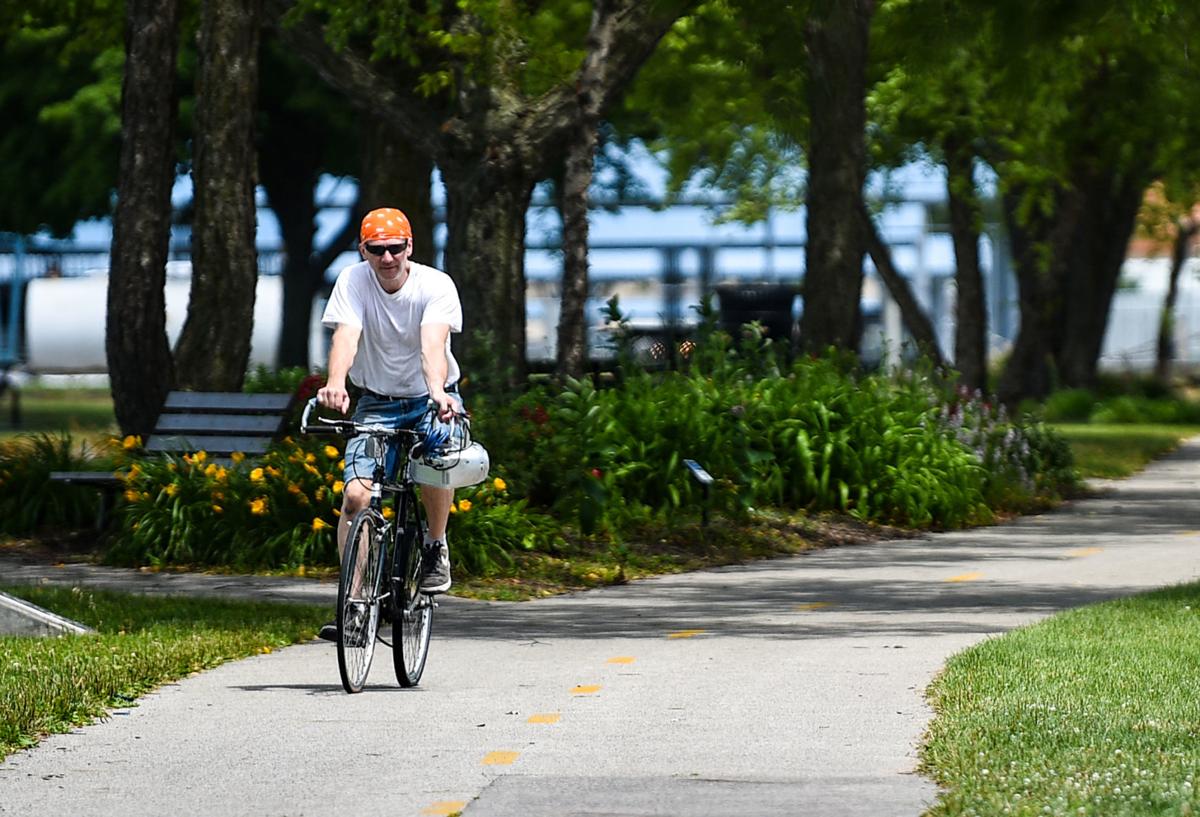 While gyms, some area parks and more have temporarily closed and travel has screeched to a halt during the COVID-19 pandemic, fitness enthusiasts and families are taking to the streets and bike paths, and scooping up bicycles faster than area stores can build them.

Many customers who haven’t ridden in years or are just getting started are gravitating toward more “entry-level” bikes, he said, such as comfort-style bicycles and some hybrid bicycles, which are a mix of a mountain bike and a road bike.

“A lot of that stuff just flew off the shelves pretty quick,” he said.

Other bike shops are seeing the same, it's a national trend. The Associated Press reported that over the past two months, bicycle sales saw their biggest spike in the U.S. since the oil crisis of the 1970s, according to Jay Townley, who analyzes cycling industry trends at Human Powered Solutions.

As COVID-19 closed many doors, cycling “kind of took off,” said Jerry Neff, one of the owners of Jerry & Sparky's Bicycle Shop in Davenport. It “was one of the few things (people) could do."

People are traveling from all over the Midwest to buy bikes at Q-C stores because “there’s such a shortage,” Neff said. “We’re very blessed … that we’re booming like this.”

And sales aren’t the only thing “booming.” “We have seen, definitely, an increase not only in bike sales, but in repairs,” said Loree Phlypo, who co-owns Let's Ride Inc., in Silvis, with her husband, Tim.

“People are bringing bikes (in) and trying to make them work,” Tim said. Some are bicycles that haven’t been ridden in four or five years, while others haven’t been out of the garage in 10 years or more, he said.

“(We’re) really starting to have a hard time with getting parts,” he said.

But in a seasonal business, it’s hard to complain about the stress.

The Associated Press reported that the bicycle craze has led to shortages that will take weeks, or perhaps months, to resolve, particularly in the U.S., which relies on China for about 90% of its bicycles, Townley said. Production in China was mostly shut down due to the coronavirus, but is now resuming.

Thankfully, “(we) are able to say that we do have bikes,” Loree said, with more coming probably in the middle of July, Tim added.

Locally, the last boom for bikes was probably around 2001 after gas prices surged, said Dan Adams, store manager of Healthy Habits in Bettendorf.

“We’re seeing bikes that probably haven’t been out of the garage since then” in for repairs and maintenance.

The largest bicycle shortages, area shops say, are with comfort-style and hybrid bikes for adults and teens, as well as kids’ bikes. “We just can’t get them (kids’ bikes),” Loree said, adding that all of their vendors are sold out.

Kids’ bikes are hard to come by at Healthy Habits, too, Adams said. In addition, "family bike path-style bikes have all just been flying off the shelves,” too.

Hybrids are popular because they let the cyclist “ride on the bike path and on the street,” Loree said.

This comes in handy as “people (are) trying to figure out what they’re going to do,” Adams said, especially in areas such as the Quad-Cities, which is as packed with bike lanes on city streets as it is with trails and bike paths.

“We’re very fortunate,” Loree said, as the Q-C features the Mississippi River Trail, the Hennepin Canal Parkway and more, plus “a lot of mountain biking” paths.

“(We’re) hoping to see (cycling) as a trend that continues,” Adams said, and that folks can take this time to see “how much good infrastructure we have.”

With mountain bike trails to “awesome bike paths,” he said, he hopes people see cycling as something they can “keep doing beyond the one summer of COVID.”

About Town: Holiday lights, tacos, and a museum chat

Charlie Brown specials to air on broadcast TV after all

"The Great Pumpkin" never showed on broadcast TV this year, but after a deal with PBS, the Charlie Brown Thanksgiving and Christmas specials will return.

START THE WEEK OFF RIGHT: Can't see friends and family this Thanksgiving? Here are 5 ways to cope

The holidays are right around the corner, which means that we may have to do things a little bit differently this year due to the federal Cent…

Before she ended her run on “The Big Bang Theory,” Cuoco acquired the rights to “The Flight Attendant,” a bestseller about an airline employee who wakes up in bed next to a dead man. Now, she stars in it.

Close and Adams are perennial Oscar bridesmaids. They could have strutted up the aisle if director Ron Howard's production had been a little better.

George Clooney once gave 14 friends $1 million each — in cash

In an interview with GQ, actor George Clooney confirmed the story that he gave 14 friends $1 million each after the success of the movie "Gravity."

A contestant on TV's "Wipeout," a man in his 30s, died after completing the show's obstacle course, authorities and sources close to the production said.

Just when you thought it wasn’t safe to binge a network show, David E. Kelley arrives with “Big Sky.”

Movies in a Minute: 'Sound of Metal' & 'Hillbilly Elegy'

Movies in a Minute: 'Sound of Metal' & 'Hillbilly Elegy'

The Queen's Gambit: How a Netflix show is increasing the popularity of chess

The Queen's Gambit: How a Netflix show is increasing the popularity of chess

Check out these amazing replicas of landmarks made out of matchsticks

Check out these amazing replicas of landmarks made out of matchsticks

Ralph Horton, of Moline, rides his bike along Ben Butterworth Parkway Monday, June 29, 2020, in Moline. There's been a surge in bicycle sales since the pandemic started, as people look for activities that allow social distancing.