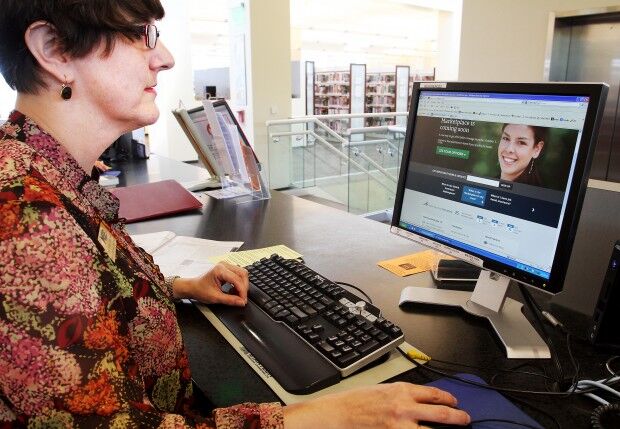 Lisa Williams, adult services coordinator at the Moline Public Library, shows the website patrons can access for information on the federal Affordable Care Act, and the Illinois Health Insurance Marketplace. Librarians across the Quad-Cities received special training to help consumers. 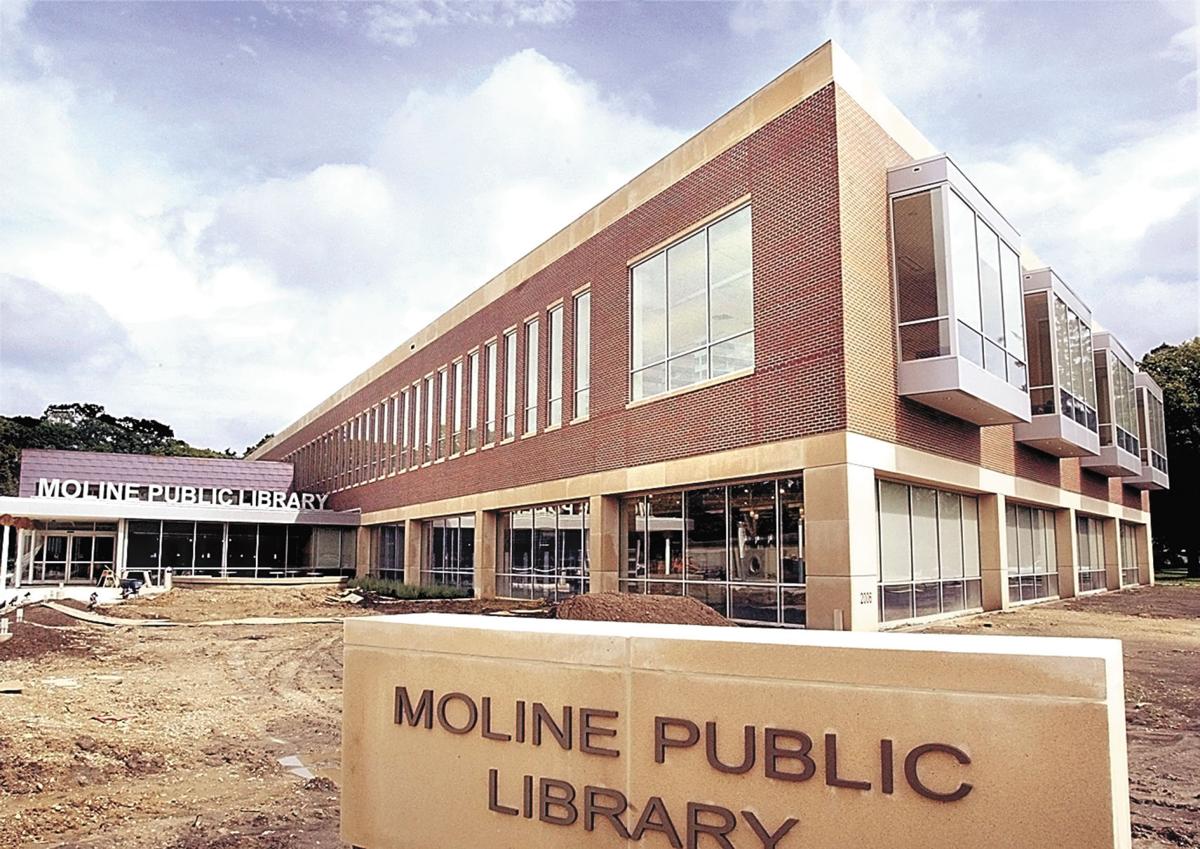 After months of dealing with water leaks that could damage thousands of books and other materials, the Moline Public Library will soon get a new roof. City council members approved a bid of $633,400 during the Sept. 1 committee of the whole meeting, advancing the matter to the Sept. 15 city council meeting for approval. Alderman Michael Waldron, Ward 7, was absent. "The roof at the library has failed. It's currently being held down by sandbags," said Municipal Services General Manager Rodd Schick.

The last line of Ernest Hemingway's novel "The Sun Also Rises," published in 1926, is "Isn't it pretty to think so?" While it isn't Hemingway's most famous line, it can evoke emotions in readers and inspiration in artists.

Before this year, to use that line, or even to find other, lesser-known works published in the same year, could be incredibly difficult and expensive. But as of Jan. 1, 2022, many works that have been copyrighted for 95 years have officially entered the public domain.

The public domain is the umbrella under which materials not protected by intellectual property rights fall, as they are free to be used and built upon by anyone. It goes beyond just literature, with around 400,000 sound recordings from before 1923 added this year, along with films and music.

In addition to "The Sun Also Rises," literary works entering the public domain this year include "Winnie-the-Pooh" by A. A. Milne, "The Weary Blues" by Langston Hughes and "Bambi, a Life in the Woods" by Felix Salten. Jazz recordings and music compositions will also be available, as well as silent films starring Buster Keaton and Greta Garbo.

Midwest Writing Center Marketing and Program Specialist Sarah Elgatian said a lot of the works entering the public domain were a product of the Harlem Renaissance, a huge arts and cultural revival among Black Americans in major cities, centering in Harlem. To have those works freely available could be wildly impactful on contemporary education and art, she said.

"It really helps people be exposed to these ideas and these concepts in these works, but not have to add that to their their budget at this particular point," said Moline Public Library Adult and Young Adult Services Coordinator Lisa Williams said. "And for artists to have the availability."

Elgatian's favorite Hemingway novel is "The Sun Also Rises," so she was excited to hear about it becoming free to access. As a writer, she said having free access to art and literature allows artists to take directly from what they're inspired by and make something new out of it. That's how the world has gotten "West Side Story" and "Pride and Prejudice and Zombies" by Seth Grahame-Smith.

As someone working with young writers, not having to jump through hoops to teach students about important pieces makes her work easier, and gives students the chance to learn something new.

"For me, with 'The Sun Also Rises,' the way Hemingway dances around time passing, the way that he manipulates language such that the sentences are either totally void of adjectives or three pages long, was a huge revelation to me as a student of literature," Elgatian said. "So being able to say, 'Use my favorite writing to say what he did here that was effective, now you try it,' is a big deal."

For those looking to learn more about copyright laws and to access public domain works, Williams said the Duke Law School Center for the Study of the Public Domain, the Library of Congress and the HathiTrust Digital Library are good places to start. The Moline Public Library, along with other local libraries, offer free Wi-Fi and access to computers for those without internet.

While libraries provide a constant free source of analog and digital materials, Williams said there's no way they could carry hundreds of thousands of materials copyrighted almost a century ago. However, having famous works enter the public domain means they can focus efforts on providing other pieces for their patrons.

"What I like about it as a librarian is if we can provide free public access to these treasures, that allows us to serve a lot of people in a lot of ways, but it also allows us to use our money to buy other things that are not in the public domain that will serve our patrons' interests as well," Williams said.

Roundup: Quad-City and Midwest authors to put on your to be read list

Local authors have published works on everything from Iowa soil to wars between fantastical planets.

“Taking Down Backpage: Fighting the World’s Largest Sex Trafficker" by Maggy Krell; NYU Press (192 pages, $22.95) ——— It’s the best justice system money can buy. As a prosecutor in California, Maggy Krell saw that unfairness daily, particularly when cops would do sweeps of streetwalkers. Pimps and johns who exploited prostitutes went free. The women went to jail. Krell’s book, “Taking Down ...

In 1973, a Korean War veteran with a Ph.D. in English from Boston University published his first novel, a detective tale called "The Godwulf Manuscript." Its hero was a private detective named Spenser (no first name). Robert B. Parker’s books about him became a phenomenon — Parker wrote 40 bestselling novels about Spenser (as well as numerous books in three other series) before he died at his ...

Evison deftly weaves stories of the present and the past, illustrating how all of our lives and futures are linked together. "Small World" by Jonathan Evison; Dutton (480 pages, $28) ——— The passengers aboard the Amtrak Coast Starlight are all bound for Seattle. Strangers on a train, they will all be affected by an accident that will derail plans and upend lives. Jonathan Evison's "Small ...

In kids' book, Sotomayor asks: Whom have you helped today?

The book comes out Tuesday and is Sotomayor's third book for young readers.

Ulrich Boschwitz wrote his novel about a German Jew on the run in the days after Kristallnacht. One day last March, former U.S. Sen. Rudy Boschwitz opened his Wall Street Journal to find a review of a book that had been written by his cousin Ulrich. His cousin, who he hadn't known was a writer. His cousin, who had died in 1942. "I was startled when it appeared," Rudy said. "I had never heard ...

SEATTLE — Elizabeth George does have an endgame for her bestselling Inspector Thomas Lynley mysteries — the newest of which, "Something to Hide," arrived in bookstores Jan. 11. But, to the relief of the many fans of the series, she hasn't arrived there yet. George, speaking in a telephone interview from her Seattle home, said she's always delighted to begin a new Lynley book: "There's always a ...

What We’re Reading: To tell the truth, these self-help books about work and burnout are stressing me out

Lisa Williams, adult services coordinator at the Moline Public Library, shows the website patrons can access for information on the federal Affordable Care Act, and the Illinois Health Insurance Marketplace. Librarians across the Quad-Cities received special training to help consumers.

After months of dealing with water leaks that could damage thousands of books and other materials, the Moline Public Library will soon get a new roof. City council members approved a bid of $633,400 during the Sept. 1 committee of the whole meeting, advancing the matter to the Sept. 15 city council meeting for approval. Alderman Michael Waldron, Ward 7, was absent. "The roof at the library has failed. It's currently being held down by sandbags," said Municipal Services General Manager Rodd Schick.