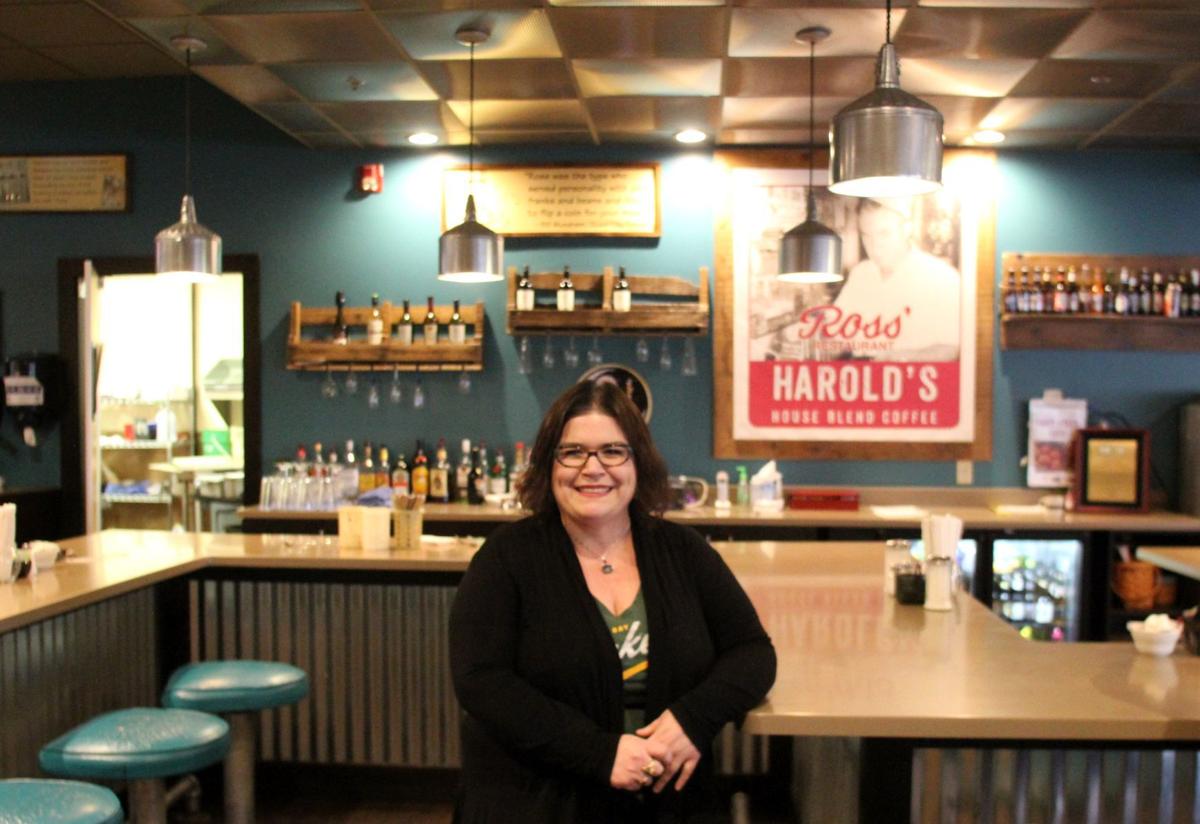 Melissa Friedhof-Rodgers, general manager at Ross' Restaurant, says the horseshoe-shaped counter is her favorite spot inside the eatery's new home on Falcon Avenue. 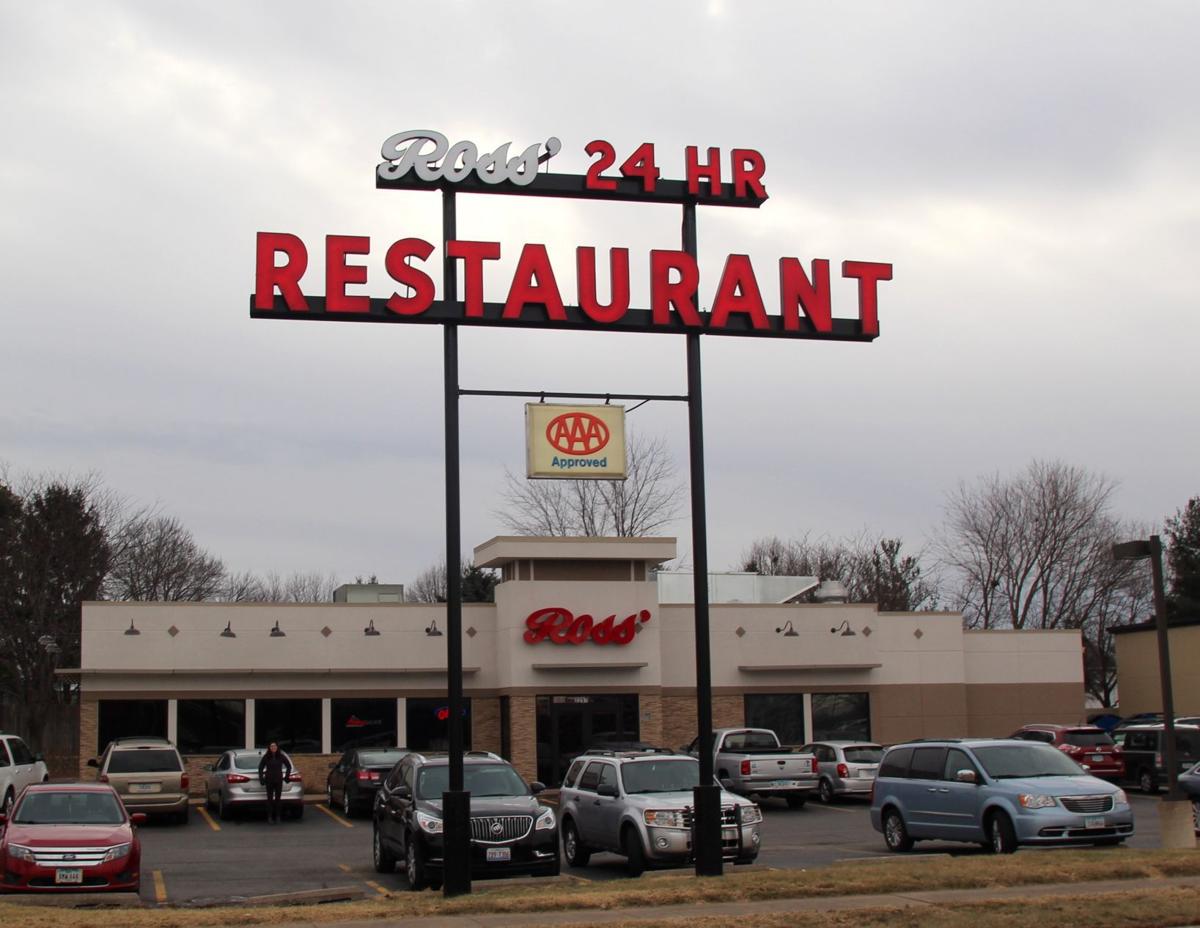 Ross' Restaurant moved to its new home on Falcon Avenue, Bettendorf, in October 2015. 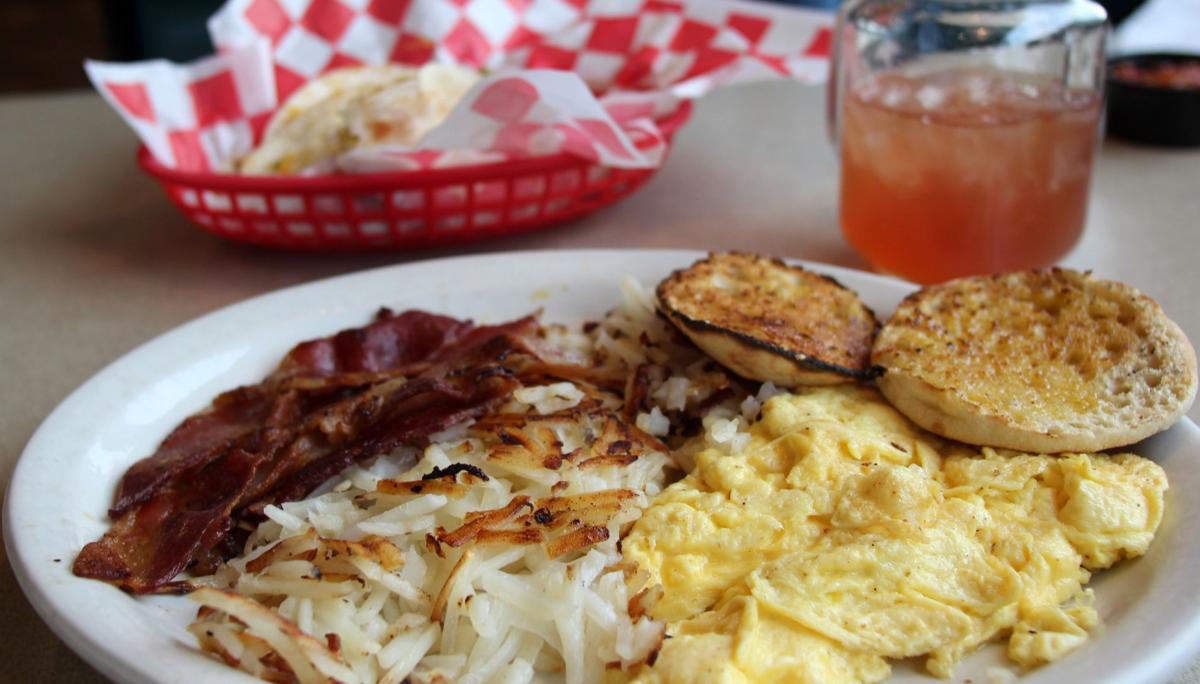 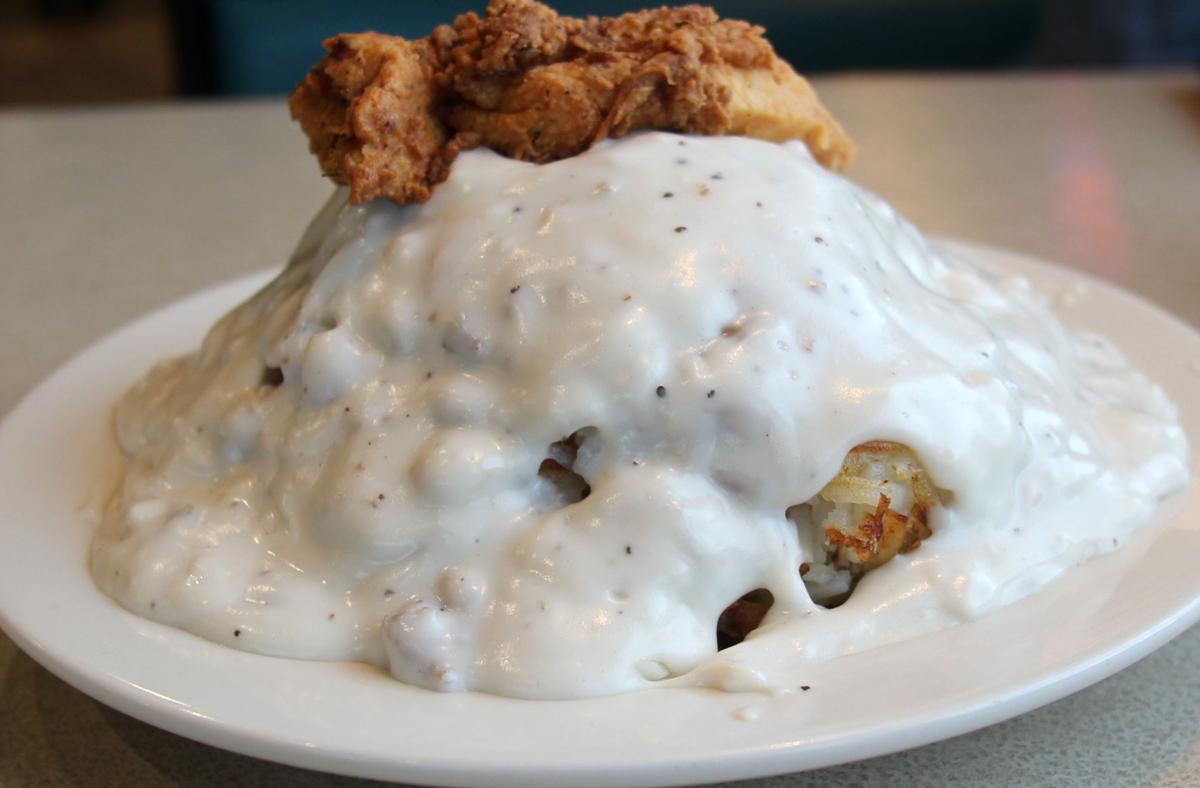 The Cockadoodle Doo Mountain is one of many over-sized plates served at Ross' Restaurant. 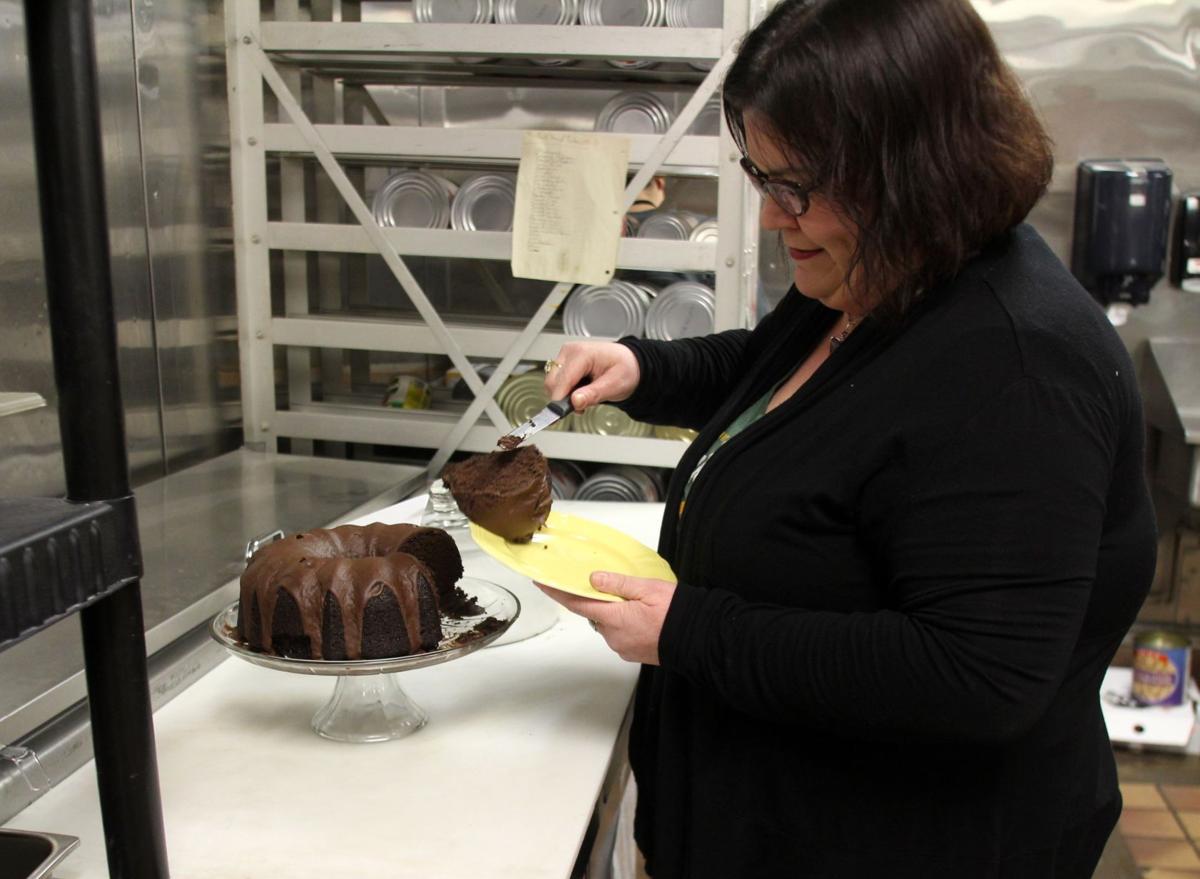 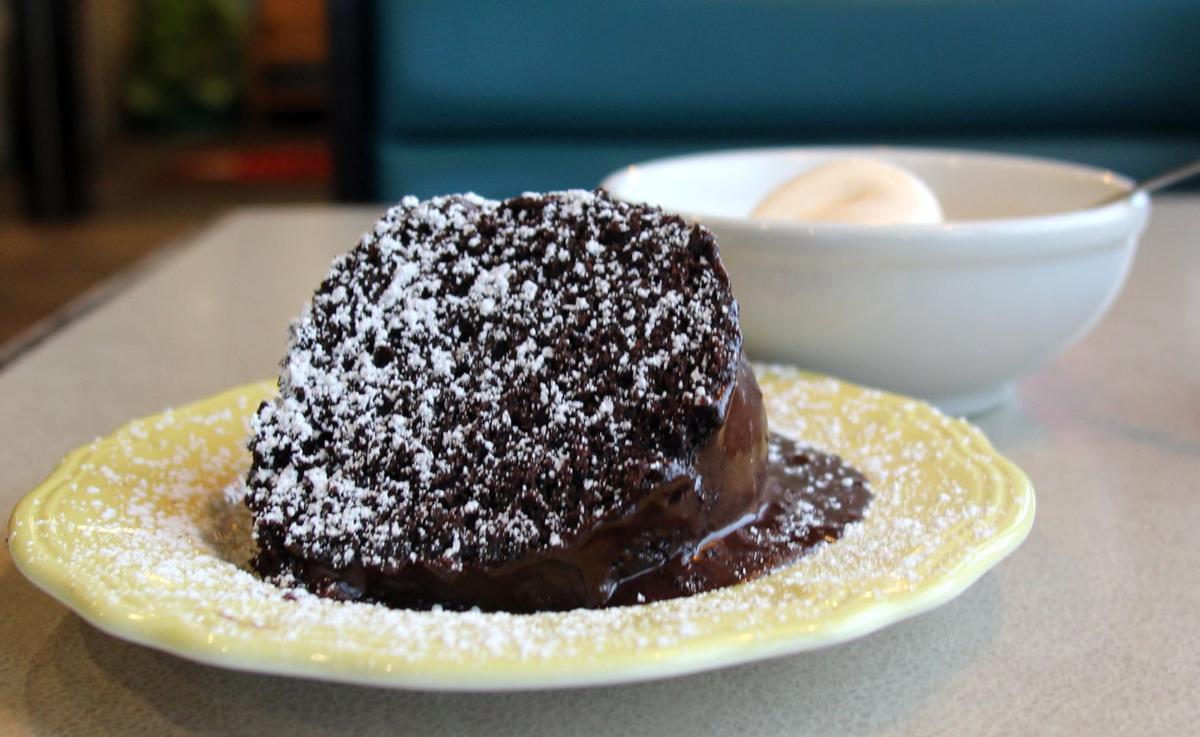 The OMG Chocolate Cake is a vegan dark chocolate treat at Ross' Restaurant.

Last month, I launched a series in the Quad-City Times Food section with the mission of reaching and writing about the far corners of the Quad-City dining landscape.

So far, I’ve enjoyed going "On the Road" and visiting places such as Kalmes Restaurant in St. Donatus, Iowa, and Maple Street Grille in Orion, Illinois. I'm looking forward to more of these miniature road trips, in search of hidden food treasures.

But this week, in place of a far-away adventure, I decided to explore a Quad-City treasure that’s not so hidden. It's pretty obvious.

Since I moved here about a year ago, I’ve heard that Ross’ Restaurant is a go-to choice for 24-hour eating, a must-stop for presidential candidates and a good place to take your mom for brunch. It was starting to feel like everyone, including President Barack Obama and Johnny Cash, had been there — except for me.

So, on Sunday, I visited Ross’ Restaurant for the first time.

I ordered the No. 1 breakfast special, watched mountain-sized plates go to nearby tables and asked for stories about the black-and-white photos, some that go back to the 1940s, on the walls.

And I had that homey feeling that everybody probably feels when they go to the 77-year-old establishment. I like how Melissa Freidhof-Rodgers, the restaurant’s current general manager and granddaughter of the restaurant’s founder, summed it up for me.

"A lot of people ask, 'What's special about it,'" she said. "It's one of those things that’s hard to explain, but what it comes down to is ... it’s really more than a restaurant."

When I called Melissa’s mother Cynthia Friedhof, who owns Ross’ with her husband, Ron, I was curious for her take on the restaurant’s history and what makes it special.

I didn't expect what she said first.

“A story would be good, so people know we’re actually open,” Freidhof said.

Sure, everybody knows about Ross’ Restaurant. But, Friedhof said, not everyone knows that when its longtime downtown Bettendorf home closed in 2015 to make way for the new Interstate 74 bridge, the restaurant didn’t go away.

"This is the truth of the matter," she said. "A lot of people still think we're closed. They tell me all of the time that they're so sorry we closed, and I tell them we're open.”

When a restaurant has been around as long as Ross’, “it seems you have to reach one person at a time,” Friedhof said.

In October 2015, the Friedhofs moved the diner, which originally opened in 1940 under the name Bettendorf Maid-Rite, to its current location at 2297 Falcon Ave., Bettendorf.

While Friedhof describes saying goodbye to that “iconic” spot as “the most traumatic thing of my life," she has adjusted to the new neighborhood over the past 15 or so months.

"It was really hard to leave that place, because there was so much history," she said. "But what we really loved was the people. And they still come.”

People are still visiting Ross’, indeed. When I talked to Melissa Freidhof-Rodgers after my first-ever Ross' meal, she said business is busier than ever at the new location.

She grew up at the restaurant, and after years away working in social work, she returned to the family business about 15 years ago.

"I feel as at home here as I did at the old store," she said. "I think about the people who come here, six generations of people, and it's a real community."

Parts of the old restaurant, such as booths, wall art and tables, are the same here and other parts were upgraded.

"It's a beautiful space that reflects who we've become over the last 77 years," she said. "It pays homage to how we started, but it's a fresh face."

Ross’ has certainly evolved over the years, especially on the menu side, she said.

When I walked in on Sunday, I was surprised to see a line of regionally made kombucha available and to hear Friedhof-Rodgers say they sell more kombucha than hot tea. I also was surprised to see locally sourced eggs and chicken sausage on the menu and loaves of homemade bread cooling in the kitchen and to hear about recipes passed on from Melissa’s great-grandmother.

That surprise factor I experienced is what Cynthia Friedhof calls a “little bit of an identity crisis.”

"People think we only do the decadent stuff and the diner stuff, and that’s not true," she said. “We do so many things they don't know about, whether it’s working with local farmers or having gluten-free options.”

One opposite-of-diner option, which I (thankfully) got a taste of, is the OMG Chocolate Cake, a vegan dark chocolate cake that’s a creation from Freidhof-Rodgers.

"It's a cake that looks amazing, but you don't have to feel all that bad about," she said.

She said Ross’ will continue to offer the famous Magic Mountain, a dish consisting of Texas toast covered with ground beef, French fries, cheese and chopped onions. It also will continue surprising people.

“I want it to be a place where you can get the burgers and hash browns but also the healthy sustainable meal,” she said. “We try to always keep up with those things and add to our menu.”

Ross’ Restaurant is as famous for the Magic Mountain as it is for visits from celebrities such as Jimi Hendrix and Chuck Berry.

“It’s just an institution,” Cynthia Friedhof said. “I have so many stories, I’m going to write a book about it all one day.”

In her book, there’s one thing that sets Ross’ apart: It’s family-run.

"Today, family-owned businesses are like endangered species," she said. "They're all going away."

But not Ross’ Restaurant.

"I think people have a longing for nostalgia and memories, and we naturally have that," Friedhof-Rodgers said. "It's a reminder of the past."

To Friedhof-Rodgers, the move to Falcon Avenue, where each day is "a labor of love," is a marker of new memories.

For me, I'm glad to finally have a Ross's memory of my own.

Ross' 24 Hour Restaurant owners announced the purchase of the former Frank's Pizza building near 18th and 53rd in Bettendorf, Iowa as the new …

On the road: Maple Street Grille is a 'destination place' in Orion

Grilled cheeses aren’t on Maple Street Grille’s menu, but the chef doesn’t say so when a table orders three of the sandwiches during lunchtime.

On the road: Family is everything at Geno's Pizza in Preston, Iowa

Gene Camp doesn’t make the pizzas that much anymore.

On the road: Since 1850s, 'small town way' pays off at Kalmes Restaurant

On the wall of the restaurant that’s been in his family for 160 years, there’s a black-and-white photo of a young Windy Kalmes.

Treehouse Pub and Eatery plants its roots in Bettendorf

For the past 20 or so years, Brian and Kathy Rashid have worked so-called normal jobs. She was a nurse and he sold satellite TVs.

Melissa Friedhof-Rodgers, general manager at Ross' Restaurant, says the horseshoe-shaped counter is her favorite spot inside the eatery's new home on Falcon Avenue.

Ross' Restaurant moved to its new home on Falcon Avenue, Bettendorf, in October 2015.

The Cockadoodle Doo Mountain is one of many over-sized plates served at Ross' Restaurant.

The OMG Chocolate Cake is a vegan dark chocolate treat at Ross' Restaurant.