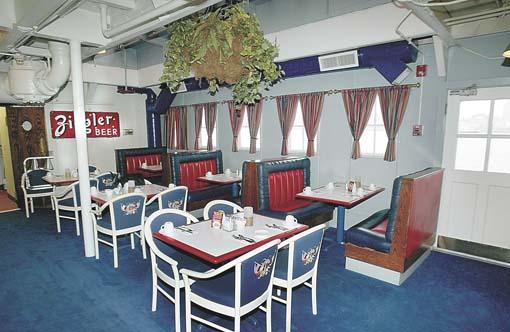 Photos by Larry Fisher/ON THE RIVER The Effie Afton restaurant, owned by and located adjacent to Jumer’s Casino Rock Island, once was a towboat and still has most of its original machinery.

The view from the Effie Afton restaurant includes the Davenport skyline and Casino Rock Island. Between 400 and 500 people dine there daily.
Jennifer DeWittON THE RIVER

From the authentic remnants of an engine room to the original piping overhead, nautical décor and the lapping waves outside, the Effie Afton is in an exclusive club of restaurants floating on the Mississippi River.

Built as a towboat in the early 1940s for the U.S. Army Corps of Engineers, the Effie Afton has been the restaurant of Jumer’s Casino Rock Island since D. James Jumer brought riverboat gaming to the Illinois Quad-Cities in 1992.

A separate vessel from Casino Rock Island, the Effie Afton plays host daily to between 400 and 500 lunch and dinner customers — a majority of whom drop by for a bite before or after a spin on the gaming boat. But its quality food and value also make it a regular stop for the hordes of workers in downtown Rock Island.

Dan Connors, Jumer’s director of food and beverages, admits that the restaurant is an amenity to the jewel of the property, the casino itself. But in true Jumer’s style, good food is critical to the operation, Connors says. He has worked for the Jumer’s company for 31 years, the past four at the Effie Afton and nine years before that as general manager of the then-Jumer’s Castle Lodge in Bettendorf.

“Mr. Jumer started in the restaurant business, so whether it’s a restaurant in a hotel or a restaurant with a casino, the foundation is food,” says Bill Renk, the company’s vice president of sales and marketing.

“What we do here, we do well,” says Connors, an executive chef by trade. With a keen attention to quality, he purchases choice meats and other food items for his menus as if “it were a center-of-the-plate restaurant.”

“We’re the best-kept secret, value-wise,” he adds, describing the Effie Afton’s weekly seafood nights that could challenge the best exclusive seafood restaurant in variety, as

well as a nightly prime-rib buffet and Sunday brunch, which costs $6.95 per person.

All meals are served buffet-style in the cozy quarters of the 115-seat restaurant. Patrons sit at tables located in each nook and cranny of the former towboat amid equipment that once gave life to the tow and “now is all for show,” Renk says.

Guests, who must be 21 years or older because of Illinois gaming rules, will find a décor rich in reds and blues, and chairs embroidered with anchors, life preservers and flags.

Originally named the Mateur, the boat was retired in 1978 and used as a training facility for deck hands in Mississippi. It was renamed the Effie Afton as a tribute to a 19th century steamer of the same name after Jumer acquired and renovated it.

The original Effie Afton became wedged crosswise in the draw span of the first railroad bridge to cross the river near Rock Island. That 1856 maiden voyage ended in a fire, which damaged the bridge and destroyed the boat.

While the fact that the Effie Afton once was an actual working boat lends to its charm, it also adds to the challenges for the 30-member restaurant crew, Connors says. “Everything is very tight and small, including the kitchen. It’s a challenge every day,” he says.

But those days might be numbered, as Jumer’s moves forward with plans to relocate the casino from the Mississippi to a new $90-million-plus complex near Illinois 92 and U.S. 280.

Those plans — which are years in the making — have received preliminary approval from the state’s gaming commission, Renk says. While Jumer’s received approval last year to move off the water, it still needs the state’s nod to begin construction for the new casino, which could open by 2007, he adds.

When that occurs, the downtown site — and the Effie Afton — “all go away,” Renk says.

But the new complex will include the casino as well as three restaurants and a parking deck in its first phase.

A hotel, multi-use space and expanded parking are planned in the second phase. As with the company’s history, food will be a centerpiece.

Queen Elizabeth II Zoomed with Prince George on his birthday

Photos by Larry Fisher/ON THE RIVER The Effie Afton restaurant, owned by and located adjacent to Jumer’s Casino Rock Island, once was a towboat and still has most of its original machinery.

The view from the Effie Afton restaurant includes the Davenport skyline and Casino Rock Island. Between 400 and 500 people dine there daily.
© Copyright 2021 The Quad City Times, 500 E 3rd St. Davenport, IA | Terms of Use | Privacy Policy
Powered by BLOX Content Management System from TownNews.com.
You don't have any notifications.