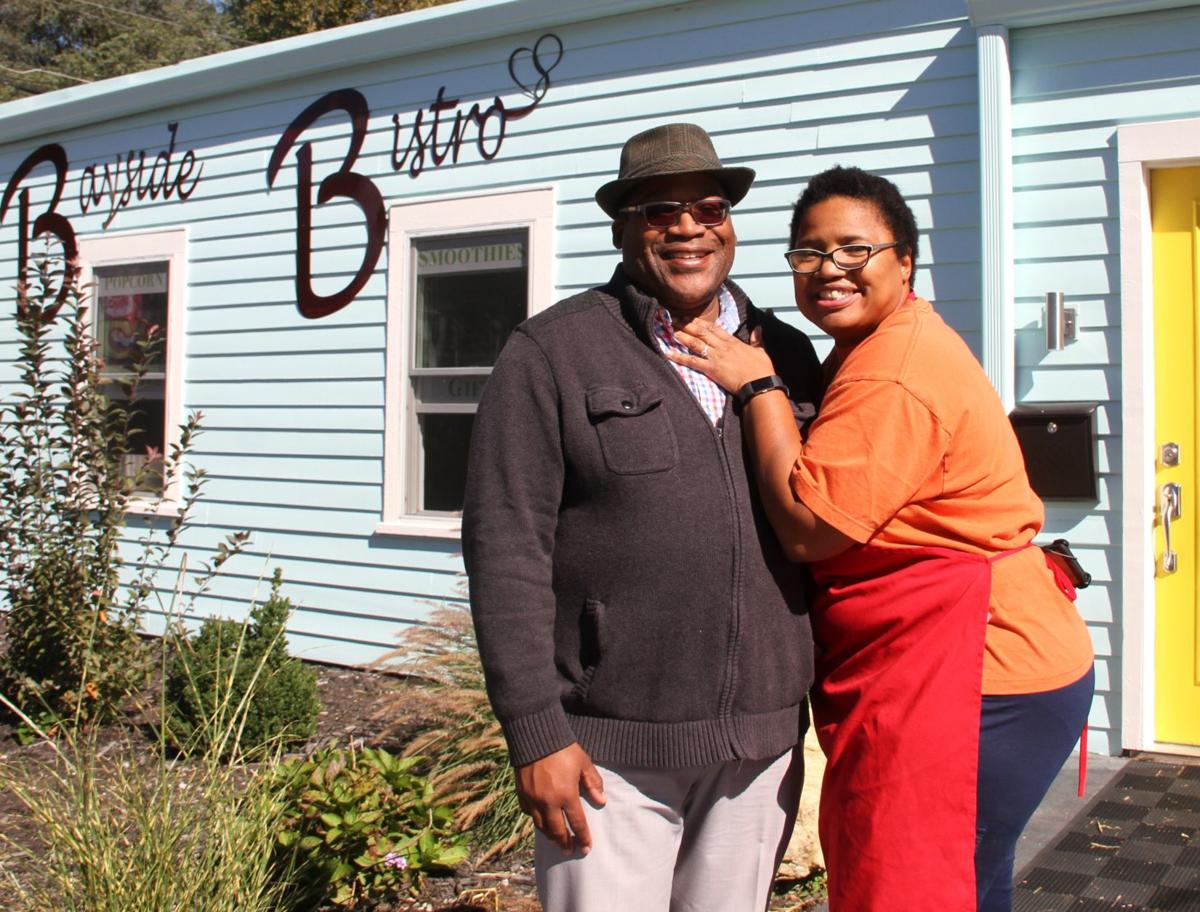 Darryl and Latisha Howlett pose in front of their restaurant, Bayside Bistro, in the Village of East Davenport. 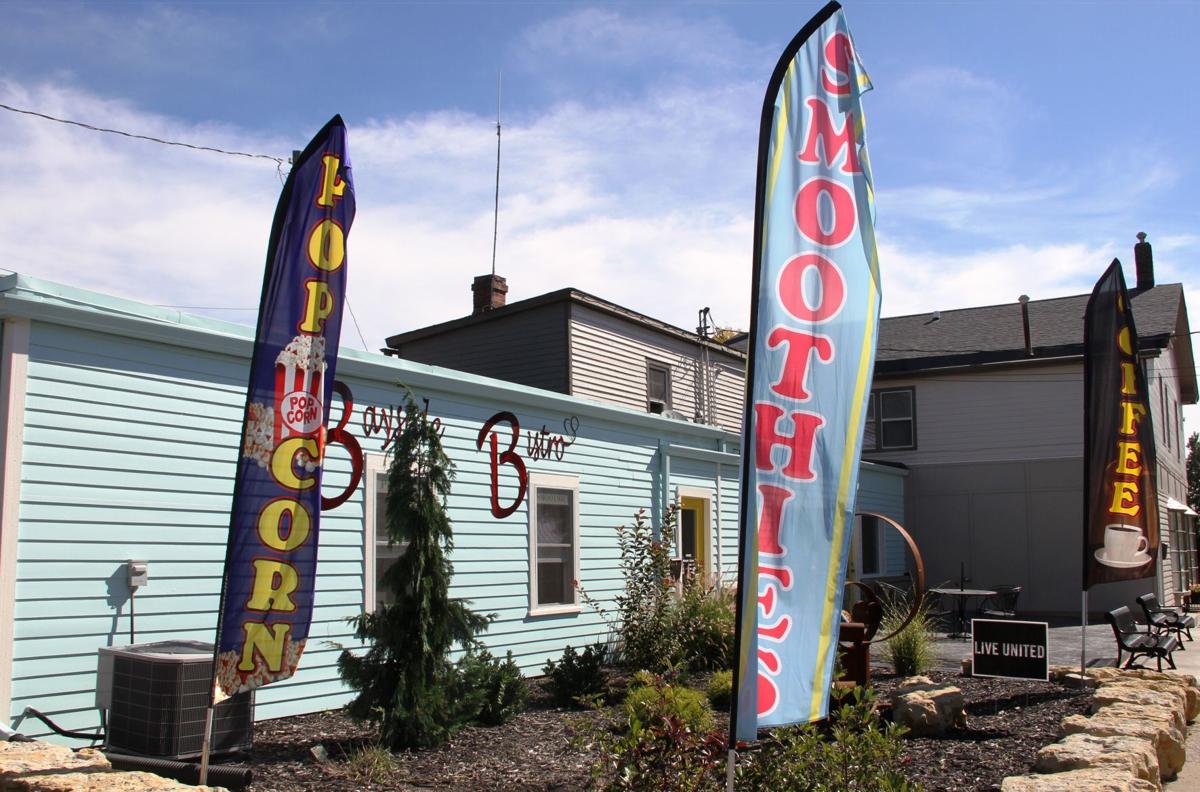 Bayside Bistro opened on Aug. 26 on Christie Street in the Village of East Davenport. 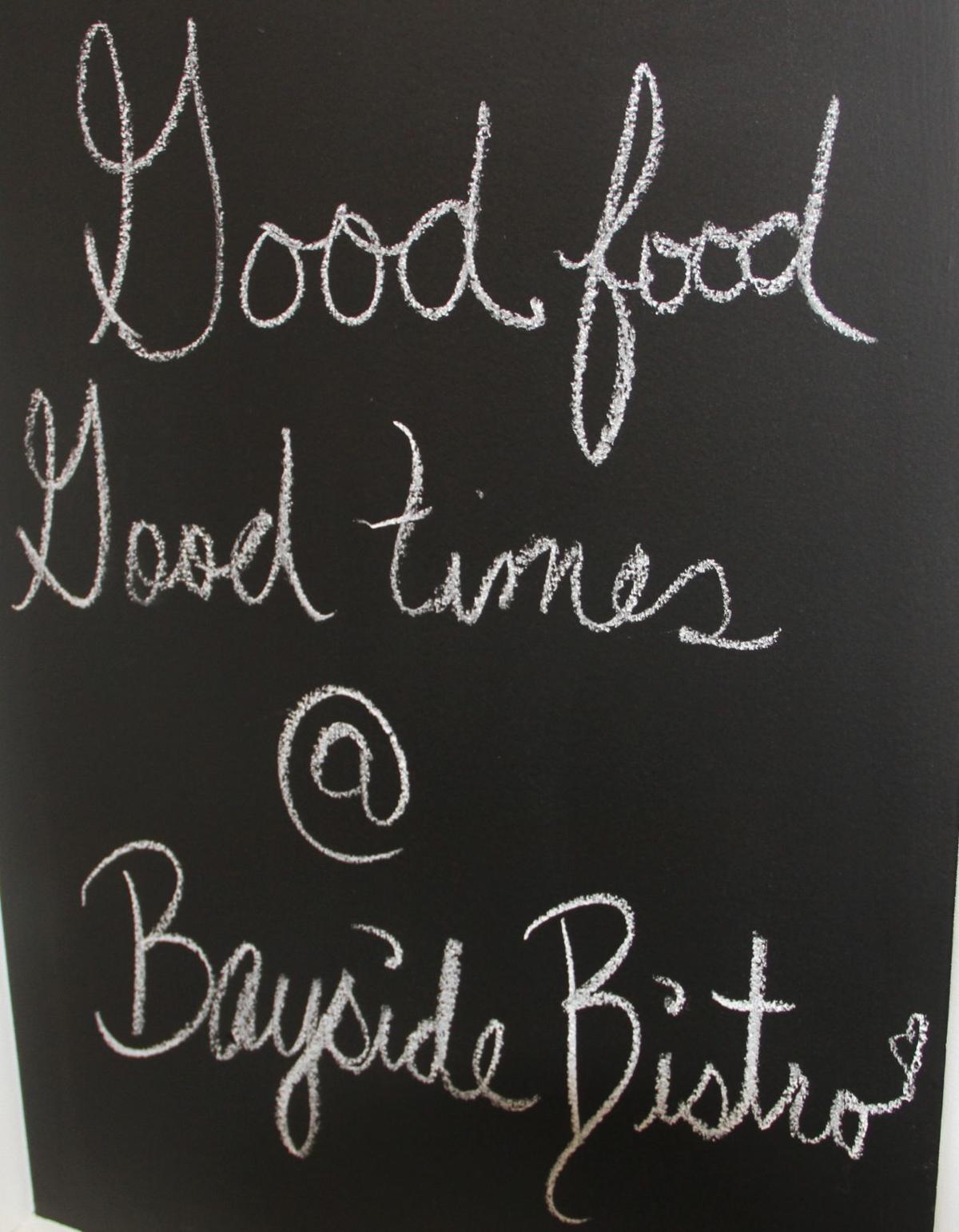 A chalkboard sign is seen inside Bayside Bistro, the newest restaurant to open in the Village of East Davenport. 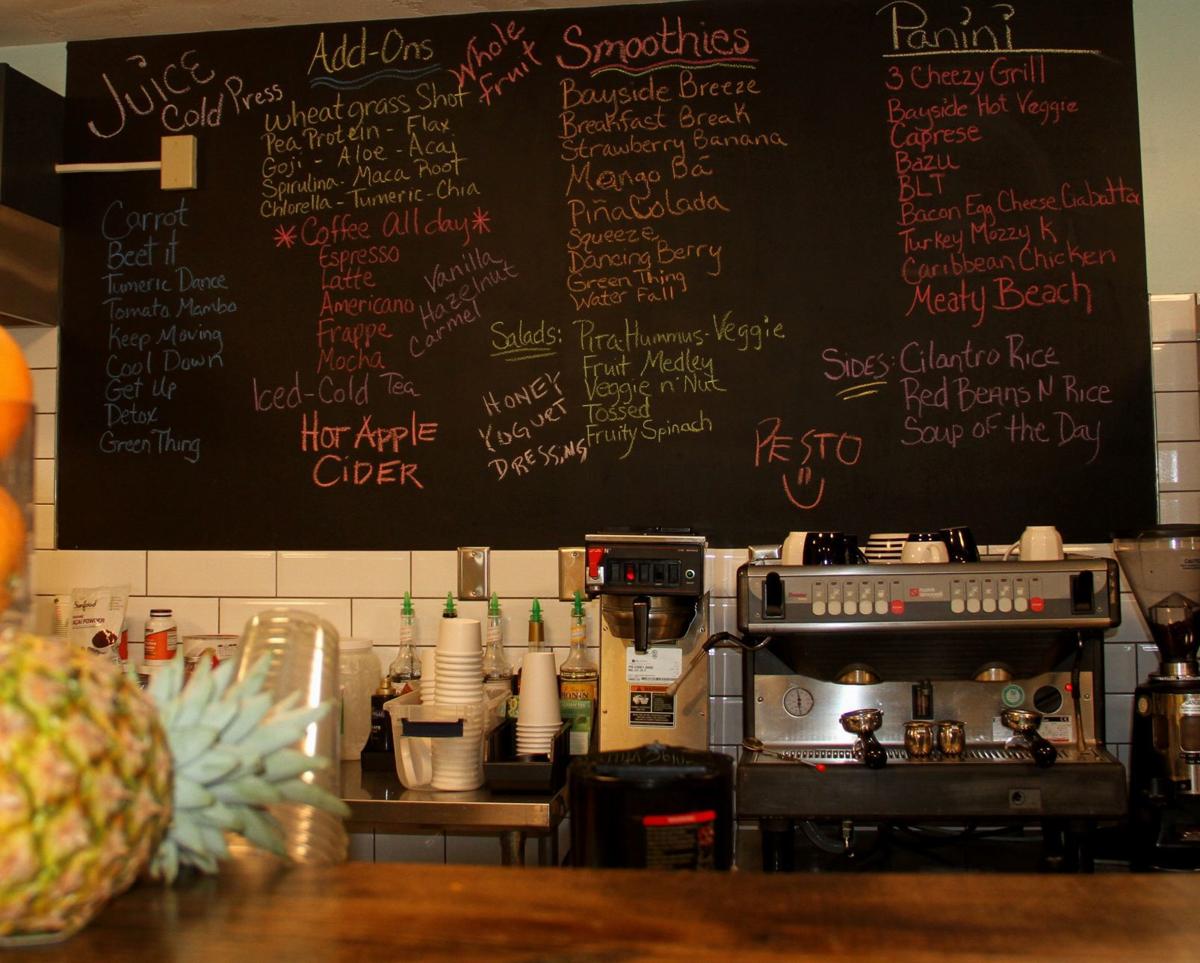 The menu, featuring smoothies, sandwiches and coffee, is on display at Bayside Bistro in the Village of East Davenport. 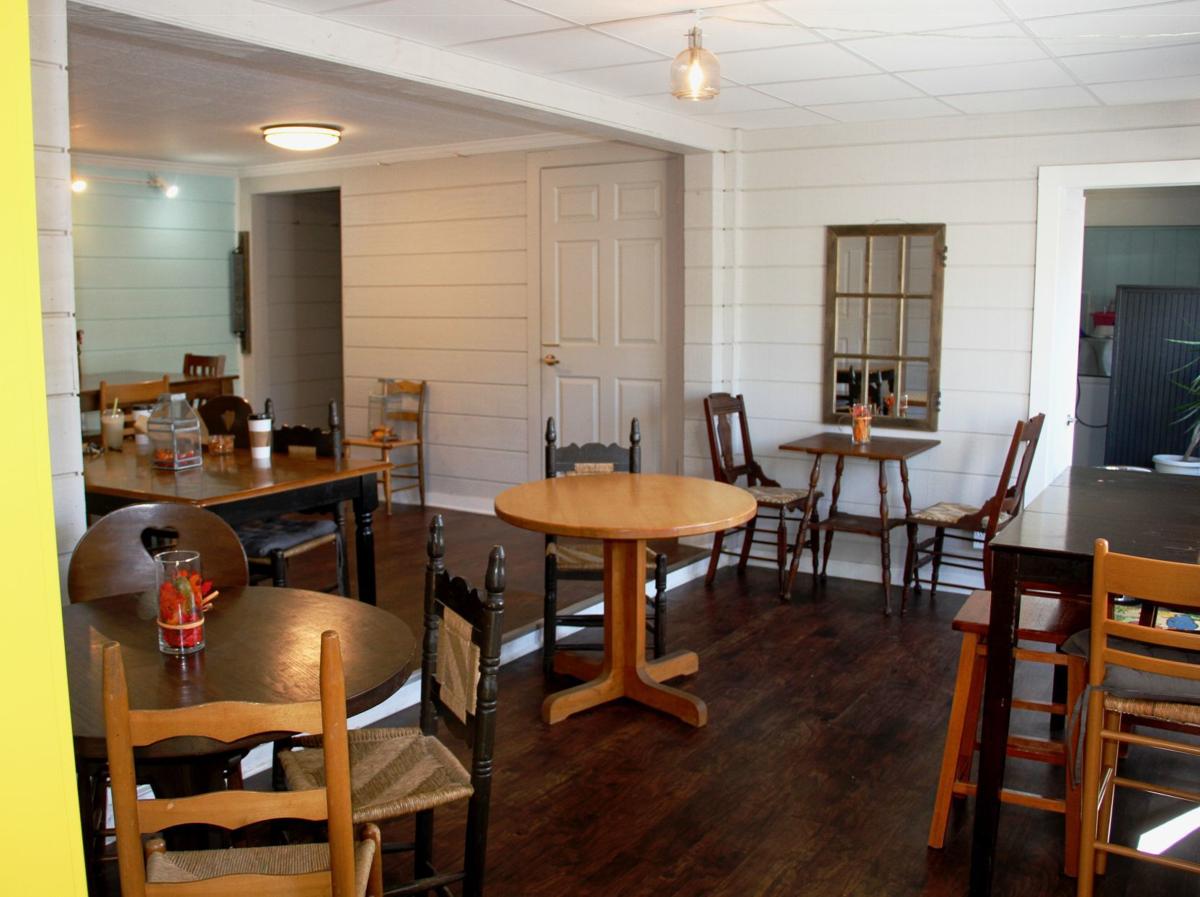 Owner Latisha Howlett envisioned the interior of Bayside Bistro to have a homey and vacation-esque atmosphere. 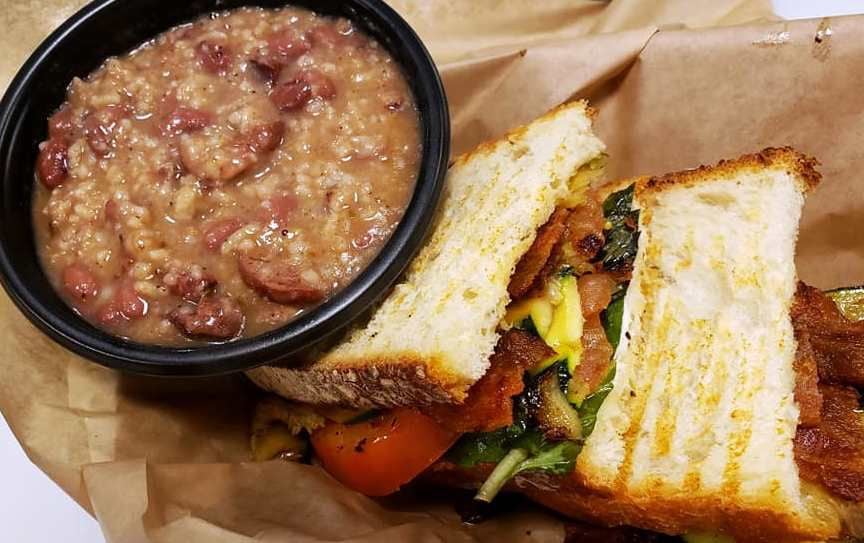 A sandwich and soup at Bayside Bistro.

A variety of flavors of popcorn are available at Bayside Bistro in Davenport. 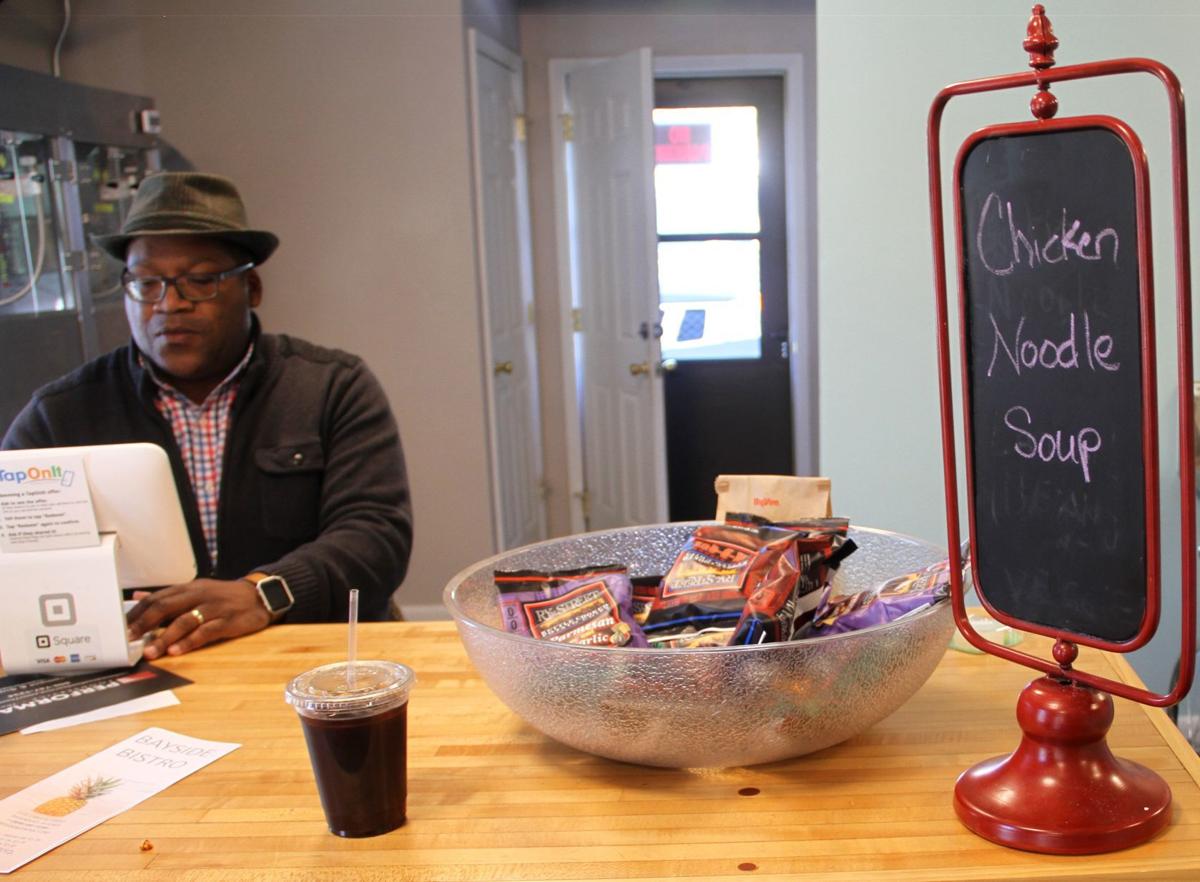 Darryl Howlett takes an order behind the counter at Bayside Bistro, a restaurant that opened in August in the Village of East Davenport.

The internet is down during a recent afternoon visit to Bayside Bistro, and, even though they don’t really show it, it’s bothering the eatery’s owners.

Latisha Howlett has headphones wrapped around her neck, at-the-ready for phone calls, while she talks with the internet provider and also calls out an order for a “3 Cheezy Grill,” her version of a grilled cheese sandwich.

Her husband, Darryl, remarks that, usually, Caribbean music is playing in the background, which adds to the place’s “relaxing vibe.” But, again, the internet is down.

And he isn’t too stressed to say, “Thank you, sweetheart.”

There is nothing revolutionary about the menu items at Bayside Bistro, which opened on Aug. 26 on Christie Street across the street from Lagomarcino’s in the East Village of Davenport.

The healthy-leaning menu features specialty coffees, fresh juices, a wide variety of smoothies, salads and a selection of paninis, including a few vegetarian options and others like the Caribbean chicken and the “Meaty Beach,” as well as a breakfast sandwich.

The Bayside name is already well known for its smoothies, which the Howlett family has sold since 2009 at the Freight House Farmers Market.

The self-proclaimed “smoothieologists” drew a following there with seemingly simple fruit-filled concoctions such as Strawberry Banana or Pina Colada smoothies.

“A lot of people would come back and ask us, ‘How did you make this so good?’” Darryl, who works full-time as the First Army public affairs officer, said. “And we said, ‘We make ours with love.’”

She also makes sure some part of her food is healthy, as Darryl can attest to.

Latisha has translated that to Bayside Bistro in, for example, a panini that includes homemade red pepper hummus and bacon, among other ingredients.

Darryl and Latisha have tried a brick-and-mortar version of Bayside before.

They opened it in 2011 near the Mississippi Valley Fairgrounds on Locust Street. It closed after about a year.

The couple, who has lived in the Quad-Cities since 1999, didn’t want to rush into another location. So, they waited.

“When found out about this spot,” Darryl said, “We quickly got on it.”

They renovated the large space, formerly occupied by Central Market Popcorn Company and other businesses, to match the tropical theme of Bayside Bistro. The outside was painted a soothing light blue and the interior features antique tables and chair and the feeling of being on a boardwalk just a short walk from the beach. A scenic boardwalk painting and an arrow sign reading “Beach,” which actually points to the restroom, help with that atmosphere.

“In the Midwest, everyone wants to be bay-side,” Latisha said. “It’s a destination place. It’s a vacation spot. No matter what time of year it is, you can come here and feel the sunshine.”

The couple also outfitted the restaurant so that when customers walk in, they are greeted by an open-style kitchen, which Latisha says is reminiscent of their home.

“When I’m in my home cooking, I love to talk,” she said. “And I don’t want you around the corner. I want you right there so we can have a conversation.”

It’s true at home and at Bayside: Conversations range from light to heavy.

“I have counseled a lot of people in my kitchen,” she said. “I rejoice when others rejoice. I mourn when others mourn.”

Latisha, who got her love of cooking from her mother, tends to think there’s no better place to vent, heal, laugh or cry than around food.

“When you’re here, I want you to feel like you’re at home,” she said.

A big part of that feeling is being treated to anything Latisha conjures up in the kitchen. Latisha has owned several of her own businesses and also works as an area realtor. But, making food? That’s not so much a job as it is in her blood.

“Some people are very creative with words, others with drawings and paintings and others, which I admire the most, are creative homemakers,” she said. “They can make a cardboard box into something beautiful. That’s not where my talent lies. But I can make anything in the kitchen. If I have eaten it, I can make it.”

She is quick to add this: “I’m not a baker, because there are rules.”

All about the experience

When Latisha thinks about her family’s journey with Bayside Smoothies and now Bayside Bistro, tears come to her eyes.

It has taken awhile to get it — mostly, the location — right.

“To put it boldly, it’s like having the bad boyfriend or the bad girlfriend,” she said. “It’s like trying to make a relationship work that just isn’t. And then, opening this place, it feels like coming into a relationship that was positively meant to be from the moment it starts. And it feels good all over and you just want to commit. You just know it’s right without a shadow of a doubt. And that’s how I feel about the space I’m in.”

“Bayside was always about an experience,” Darryl added. “And this place fits that experience.”

To be clear, though, running a restaurant is more of a “nightmare,” as Latisha puts it coyly, than a dream business.

“It’s very labor intensive,” she said. “This is not for the faint of heart. It’s not for anyone who just has good recipe for a sandwich. You have to really be in it and love what you’re doing.”

That is especially true on an afternoon like this, where not much seems to be going smoothly, she said.

Soon, though, the internet comes back on and so does the Caribbean music and Latisha said there’s a reason — actually four — she keeps going.

“We originally started this for our children,” she said. “This is their legacy just as much as it is mine.”

Yes, you could say they feel strongly about this restaurant.

On a chalkboard in the dining room, a handwritten message asks customers to leave Bayside Bistro reviews on Facebook.

Reviews are all positive, so far. But Latisha said she knows, at some point, a negative comment or two will be left.

And, with everything she’s been through on this afternoon and in the decade since her family started a business called Bayside, she has something to say about that.

“This is a place of tenderness and respect, where the food is handled that way, specifically for you, because we love to serve,” she said. “The food truly is an expression of my heart. So, if you don’t like the way my heart is presented, don’t crush it.”

Darryl and Latisha Howlett pose in front of their restaurant, Bayside Bistro, in the Village of East Davenport.

Bayside Bistro opened on Aug. 26 on Christie Street in the Village of East Davenport.

A chalkboard sign is seen inside Bayside Bistro, the newest restaurant to open in the Village of East Davenport.

The menu, featuring smoothies, sandwiches and coffee, is on display at Bayside Bistro in the Village of East Davenport.

Owner Latisha Howlett envisioned the interior of Bayside Bistro to have a homey and vacation-esque atmosphere.

A sandwich and soup at Bayside Bistro.

A variety of flavors of popcorn are available at Bayside Bistro in Davenport.

Darryl Howlett takes an order behind the counter at Bayside Bistro, a restaurant that opened in August in the Village of East Davenport.