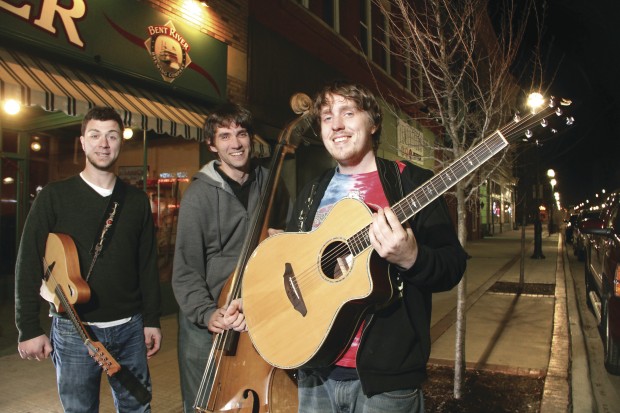 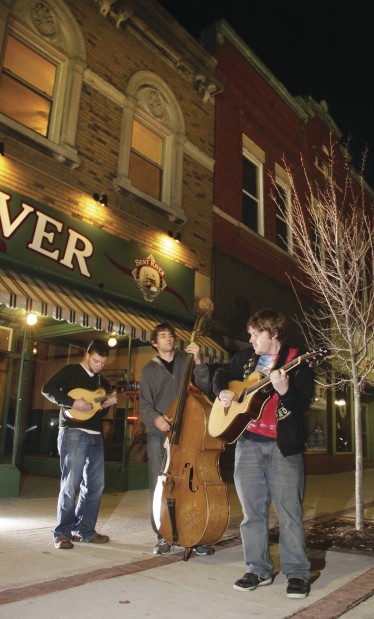 One of the newest bands in the Quad-City area is the bluegrass trio Squid's Beard. (Photo by Kevin E. Schmidt/QUAD-CITY TIMES)

While Jon Moss, Dan Olds and Chad Koker are and have been veterans of various Quad-City rock bands for years, they're ready to make some noise by being quieter.

The three formed the acoustic bluegrass trio Squid's Beard in September and they already see benefits to the genre.

"It's so much different," guitarist Moss said. "Less equipment is awesome."

"My ears don't hurt from ringing and headache. Our practices are a lot more quieter," bass player Olds added. "I love that."

"You're not bringing your amps, your pedal board, your speakers," mandolin and strings Koker replied.

The band members switch off on vocals.

Moss began getting into bluegrass music about a year ago.

"I wasn't really a big bluegrass fan, but just started learning it and jamming," he said.

Moss and Olds, both students at Black Hawk College in Moline, met in August.

"We were just listening to some bluegrass in the car one day and he suggested starting a bluegrass band," Olds said.

Koker was later recruited to fill out the trio.

They became fans of modern bluegrass acts such as the Hackensaw Boys, Cornmeal and The Devil Makes Three, and they're also getting into older acts such as New Riders of the Purple Sage. The next step, members say, is to go way back and soak in bluegrass pioneers such as Bill Monroe.

"People may say they don't like the sound, but everyone enjoys it even a little bit," Moss said of their performances so far.

The trio is an opening act this weekend for Quincy, Ill., band Ghost Hollow Road at Rozz-Tox in Rock Island.

After several opening-act slots, they're ready to headline their own show in a few months. The three already have a half-dozen original songs.

Oh, and the name? It's got nothing to do with underwater life, but rather a loyal area music fan with a large beard.

"We were joking about it one night and said it would be a good band name," Koker said. "It stuck and we started playing shows before we told him. I had to call and tell him we'd named our band after his beard.

"I finally got to call him back on New Year's Eve and he gave us his blessing," Koker added.

What: Squid's Beard, opening for Ghost Hollow Road and Hellwater

One of the newest bands in the Quad-City area is the bluegrass trio Squid's Beard. (Photo by Kevin E. Schmidt/QUAD-CITY TIMES)