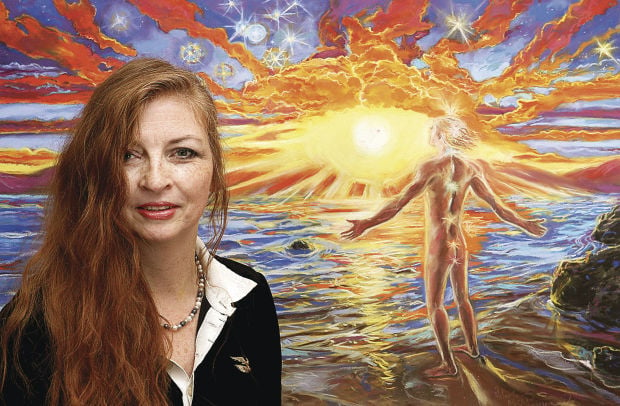 Artist Valerie McManus of Wilton, Iowa, poses with her painting that was chosen for the cover of a Grammy- nominated album by musician Peter Kater. The Grammy Awards will be presented Sunday. (Photo by Jeff Cook/QUAD-CITY TIMES) 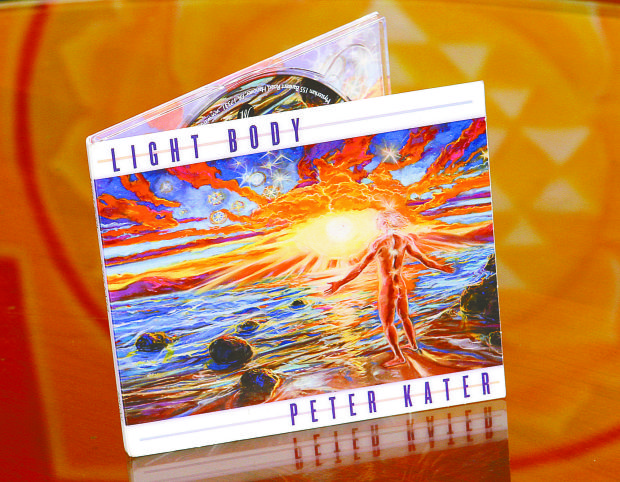 This is the cover of the Grammy-nominated record by Peter Kater that is up for an award Sunday at the annual awards presentation. A painting by Valerie McManus, of Wilton, Iowa, graces the cover. (Photo by Jeff Cook/QUAD-CITY TIMES)

WILTON, Iowa — Of the hundreds of albums up for Grammy Awards this weekend, only one has a cover with a back story that includes the Wilton Candy Kitchen, yoga and a nude man.

It happened thanks to Wilton native Margaret “Peggy” Nopoulos Glatfelter, who teaches yoga in Spring Grove, a town of 2,000 people in south-central Pennsylvania.

Glatfelter met McManus about 15 years ago when the former returned home and was at the Candy Kitchen, which is operated by her parents.

McManus, a Pleasant Valley area native, learned pranayama, a yoga-based breathing exercise, from Glatfelter. That became critical in McManus’ healing after the removal of a brain tumor, which resulted in her having to relearn how to walk, talk, drive and paint.

They found kindred spirits: Both are now in their 50s, within two years of each other, and their respective children are close in age, too.

“Valerie’s art is in every room in my house except, I think, for the kitchen,” Glatfelter said by cellphone from Pennsylvania, via a speaker placed on McManus’ dining room table in Wilton.

“Whoever did that painting has to do the album cover,” Bowden told Glatfelter.

When asked whether she would create an album cover for Kater, McManus was “taken aback because I already have Peter’s work here that I listen to.”

The eventual choice became an explosion of color to represent a sunset at Kater’s then-home on the Hawaiian island of Maui.

“I love to look at the sunsets because they’re works of art,” McManus said.

She added a human figure to the painting. A nude figure model posed for the body while the face was painted as a representation of Kater’s head rather than a portrait. She added star signs as well as a very small planet passing by the sun. McManus did all of her painting while seated on the floor of her Wilton home’s screened-in porch.

Kater was quite pleased with the painting, McManus and Glatfelter said, and wanted to make prints of it for friends. The original hangs in the foyer of his new home in Boulder, Colo.

McManus has completed another piece, what she calls a “geometric representation of the cosmos,” that Glatfelter is certain will become Kater’s next album cover.

Kater, a former pianist who has worked with John Denver and John Fogerty, was born in America but has lived in Germany for much of his life.

“His skill is above and beyond,” McManus said. “He is really doing some wonderful work and I’m really pleased with his work.”

She never expected her art would be on a Grammy-nominated album cover and couldn’t believe it when Glatfelter called to tell her the news.

“I was shocked. I was just so surprised. And then it just kept ballooning,” she said. “I was happy just the way it was, and I had gone on to other things. I wasn’t thinking about this any more.”

McManus is returning to a concentration on her main artistic focus — oil-painted portraits of individuals, families and pets. The extra touch, she said, is getting to know the subjects before she begins painting.

Glatfelter said she is thrilled with the collaboration that ended up award-nominated.

“This is what blossoms when you connect with people. You can’t predict it, you just have to let it go on its own,” she said. “Things like this happen a lot, just the synchronicities of life. When you get into these spiritual places and practices, the universe will unfold. It’s not a matter of thinking about what you’re going to do next because it pales in comparison to the bigger picture.

“What I try to do is step aside and let it happen.”

Eric Clapton said he won't perform at venues requiring COVID-19 vaccines after a UK announcement that vaccine passports will be mandatory at crowded venues.

Artist Valerie McManus of Wilton, Iowa, poses with her painting that was chosen for the cover of a Grammy- nominated album by musician Peter Kater. The Grammy Awards will be presented Sunday. (Photo by Jeff Cook/QUAD-CITY TIMES)

This is the cover of the Grammy-nominated record by Peter Kater that is up for an award Sunday at the annual awards presentation. A painting by Valerie McManus, of Wilton, Iowa, graces the cover. (Photo by Jeff Cook/QUAD-CITY TIMES)