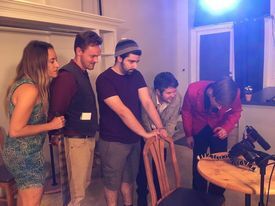 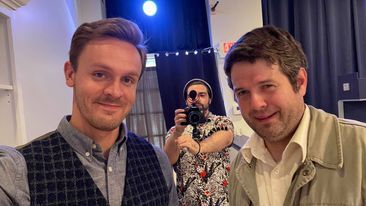 "QUAD CITIES" creators Kurt Oberhaus and Justin Marxen pose for a photo along with Khalil Hacker, who is holding the camera. 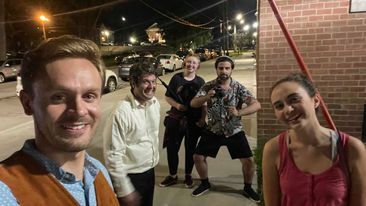 The first scene of "QUAD CITIES" shows only a dark room, with a man begging to a killer that he'll do better. The next scene features detectives, bloody bones, and a familiar backdrop of the Mississippi River.

"QUAD CITIES," a murder mystery miniseries set in its namesake, was created by Quad-Cities natives Kurt Oberhaus and Justin Marxen. All five episodes are out on YouTube now, just in time for Halloween.

While they originally planned to release the final episode on Oct. 30, they decided to release it early so it wouldn't conflict with Halloween celebrations.

"People really seem to be enjoying it," Oberhaus said. "It's just a fun entertaining miniseries to watch before Halloween."

"QUAD CITIES" follows private investigator Harry Walters, played by Marxen, and "Quad City Post" reporter Dave Lucas, played by Oberhaus, as they investigate the grisly murders of different actors. They run, drive and sneak around the Quad-Cities trying to figure out the secrets of the strange — and perhaps sinister — couple that runs the Hilltop Theater, where all the actors worked.

Oberhaus said they weren't going for high-brow, Oscar-level production with "QUAD CITIES," and were just having fun with the story and each other. The idea came from them throwing ideas for genre and characters around, then they decided to go for it. Marxen wrote the script, Oberhaus did some rewrites, and they produced and acted in it together.

Some Quad-Cities staples are name-dropped or spotted throughout the show. Circa '21 Dinner Playhouse was one of the theaters a victim worked at, parts of a body were found at LeClaire Park, and Walters and Lucas grabbed their seventh coffee of the day at the now-closed Theo's Java Club.

Much of the cast and crew on the show are from the area, and they filmed it all in the Quad-Cities area in just five days in the summer. One of the more surprising difficulties of filming was dealing with loud Davenport traffic, but other than that things went smoothly.

The first episode has around 2,000 views on YouTube, which the filmmakers said was a big jump from previous productions they've posted on the website. They've also heard some interest from viewers in seeing another season.

In addition to posting it on YouTube, they've also shown episodes at conventions like Midwest Monster Fest.

Marxen and Oberhaus met at West High School when they took a theater class together. Between building sets for the school's production of "The Music Man," the pair learned of each other's hobby of making movies.

What started out as a friendly rivalry turned into a long-lasting friendship, and Oberhaus and Marxen have made some short and feature films together over the years.

"We both share the same passion and love for acting and movies, so whenever we're acting together a lot of the time, we just get so into the scene," Marxen said. "He's great to work off of, and is like a brother to me, so just having him there all the time is great."

In the show's final scene, the detective and reporter are relaxing after a climactic end to their case when they get news of a murder by the base of the Centennial Bridge. If they decide to work on a second season, Oberhaus and Marxen's characters could crack more cases in the QC.

The erasure is yet another time the Simpsons predicted the future.

Paige offers to plan the annual holiday party at her parent's hotel in the Rockies, the Coyote Creek Inn, which will surely help her score a promotion at the upscale event planning company she works for. She decides on a "Christmas around the world" theme, to showcase the universal magic of the season through the diverse Christmas traditions of the Inn's guests. Dylan, a charismatic real estate developer and single father, is visiting Coyote Creek for the holidays with his son. What Paige doesn't know is that her parents are planning to sell the Inn and that the potential buyer is her new acquaintance Dylan. The fate of the Inn and Paige's relationships are both left for the magic of the holiday season to decide.

The live TV musical returns with NBC’s starry new "Annie" adaptation. Drag queens are the rage in a new singing competition and a campy Christmas movie.

When single mom Liz Darling finds out her estranged father, Dennis has been injured in a minor accident, she returns to her hometown of Portside for the first Christmas in years. Not much has changed except for Luke, her childhood best friend, who's definitely not the same boy she remembers. While this might not have been the holiday she'd imagined, Liz sees this as an opportunity to show her daughter Hannah the kind of magical Christmas she'd once shared with her own mother. One of their favorite traditions was participating in the town's annual Christmas Eve Sailboat Parade of Lights but after her mother passed away, the family boat was docked for good along with her father's Christmas spirit. When Liz discovers he may lose their family home, she comes up with a plan: enlist Luke's help to fix up the boat and create a floating light display spectacular enough to win the parade's $25,000 grand prize. Unbeknownst to her, Luke has a plan of his own that may finally win her heart

As we rush headlong into the holiday season, an eclectic night of TV includes the season finale of NBC’s sci-fi hit "La Brea" and an installment of ABC’s "Superstar" profiling the late George Michael.

‘The Tower’: The BritBox Mystery Makes One Key Change From Source Novel

Why did a Muslim teenager and a white police constable plummet to their deaths? 'Game of Thrones' star Gemma Whelan is on the case.

Angie is a successful surgeon in New York City but finds herself wondering what her life would be like if she had married her former boyfriend Tyler, who is now a successful sportscaster. She takes the train home after work one night but instead of arriving at her apartment in Yonkers, she somehow finds herself transported to her hometown in Connecticut 10 years in the past. At first, she's naturally disoriented by her unexpected time travel but slowly acclimates. With the advice of the train's enigmatic conductor (Lloyd), Angie navigates her visit to this Christmas past. As she works to figure out how to get back to the future, Angie has the chance to reconnect with her family and longtime friend Ben; she even teams up with her sister Kristen to help her parents, Evelyn and Marty, rekindle their romance. Along the way, Angie gains a new perspective and discovers what — and who — is truly important to her.

"QUAD CITIES" creators Kurt Oberhaus and Justin Marxen pose for a photo along with Khalil Hacker, who is holding the camera.