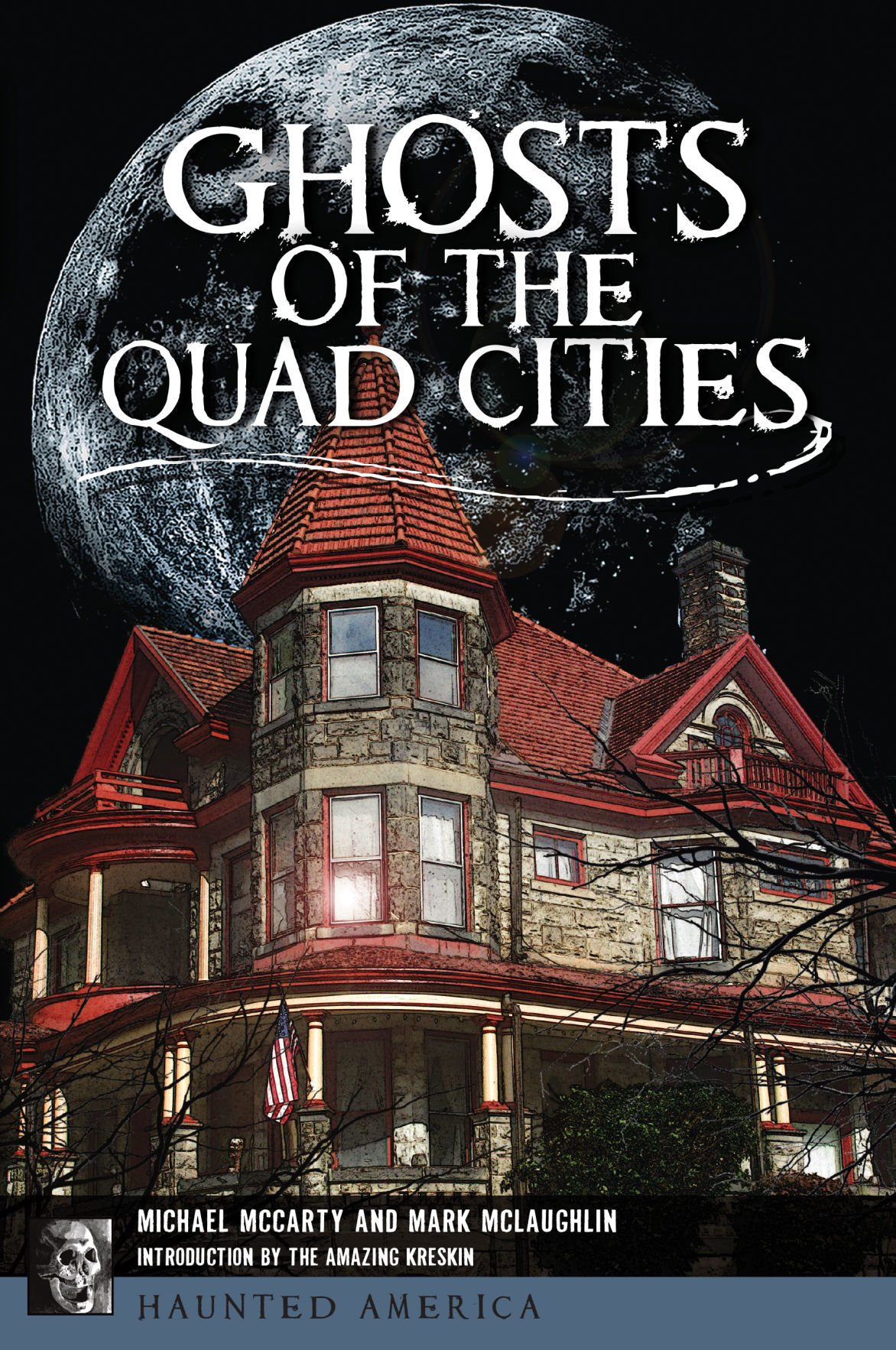 The cover of "Ghosts of the Quad Cities," published by The History Press. 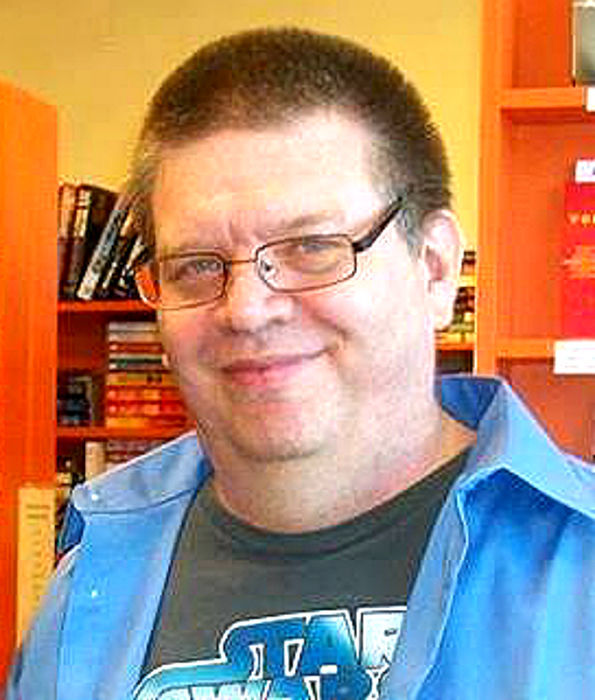 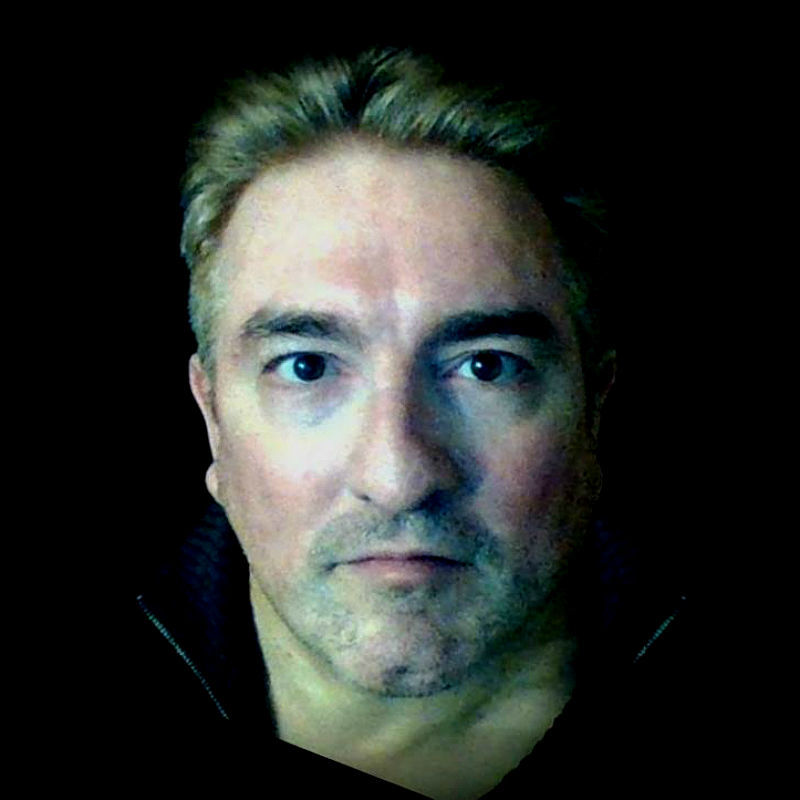 ROCK ISLAND — With their experience writing horror fiction — apart and together — veteran authors Mark McLaughlin of Davenport, and Michael McCarty of Rock Island — seem natural picks to pen their first partnership in nonfiction.

Their new book, “Ghosts of the Quad Cities,” will be released Monday, Sept. 16, by Haunted America, a division of the Charleston, S.C.-based The History Press. The 112-page paperback is an examination of supernatural, otherworldly happenings in the region, offering examples of spooky stories at 22 Q-C sites, including 11 in Davenport and seven in Rock Island.

“It's a dream come true,” McCarty said Tuesday of the book, for which he took many photos. “It's beautifully laid out, and Mark pushed that level of writing and editing to Stephen King-esque levels.”

Author of more than 40 works of fiction and nonfiction, McCarty is a five-time Bram Stoker Award finalist and winner the David R. Collins' Literary Achievement Award from the Midwest Writing Center. McLaughlin — who also has about 40 books and short-story collections to his credit — is a Bram Stoker Award-winning author whose fiction, nonfiction and poetry have appeared in more than 1,000 magazines, newspapers, websites and anthologies.

The men have collaborated on about a half-dozen fiction stories. McCarty usually comes up with the outline and overview, and McLaughlin fills in the details. McCarty has known the famous mentalist, The Amazing Kreskin (born George Joseph Kresge, now 84), for 30 years, which partly inspired him to write the new “Ghosts” book.

McCarty co-authored the 2012 book, “Conversations With Kreskin.” When he worked for the old Funny Bone comedy club in Davenport, he brought in Kreskin in 1991 to conduct a séance at Phi Kappa Chi House at Palmer College, 723 Main St., Davenport. A chapter of the new book is devoted to the house, and Kreskin wrote the book's introduction.

“People bring up the Phi Kappa Chi fraternity all the time, when they talk about haunted places in the Quad Cities,” Kyle Dickson, former assistant director of Davenport's German American Heritage Center, says in the book. In April 2019, he left to become curator of education at a museum in Las Cruces, N.M.

Other Davenport “haunted” locations in the book include Hotel Blackhawk (where actor Cary Grant was staying in 1986 when he had a massive stroke and later died), Oakdale Cemetery, City Hall, The Rock 'N' Roll Mansion (on Brady Street, a former mortuary), St. Ambrose University and Palmer College and Masonic Temple. It also includes the Black Angel of Moline’s Riverside Cemetery to the spectral Confederate POWs of Arsenal Island. Its illustrious supernatural residents include the Hanging Ghost that “occupies” Davenport’s City Hall and a Phantom Washwoman who “wanders” Bettendorf’s Central Avenue.

One of the newest Q-C haunted spots is the Halloween-themed Igor's Bistro, 3055 38th St., Rock Island.

Built in the early 20th century, the former residence has passed through several hands, home to varying businesses. Chef and co-owner Rick Lopez says in the book that the Illinois Paranormal Research Group did an investigation that indicated as many as five deceased spirits linger in the eatery, and he relates ghost stories at Igor's.

During his research for the book, McCarty held in-depth conversations with paranormal investigators. He admires their work. “They had to do their research, and treat it as a problem. This is the evidence we had. I was really impressed with all the local groups we talked to.”

“The thing about this book, more than any other one, is the combination of mystery and history,” McCarty said. “We're taking the history of the area, the mystery of the ghosts, and combining it. There are people who lived here their entire life and didn't know this.”

“There's a lot of famous ghost stories around the Midwest,” McCarty said, noting he used to live two doors down from the John Looney mansion at 1635 20th St., Rock Island. That's another thing that inspired him to write the book.

“Ultimately, there's people who debunk stories, or people that think this is 100 percent true, and we really went into it with a journalistic attitude,” he said. “We didn't say one or another. We viewed both sides of the story, and leave it for people to judge for themselves.”

“I'm the first to say, I don't know,” McLaughlin said of evidence for ghosts. “There's a lot of things a person isn't equipped to know. For example, we believe in oxygen but we can't see it. We sure enjoy breathing it. I still don't know if there are ghosts. It was enjoyable and educating to learn what other people think, and to learn what people had to say about it, and do the research. To go back in history, and learn what people thought in the past.

“Ultimately, for me, the most enjoyable part was, it was a testament to the human beliefs of both faith and optimism to think there are people who say, I believe there are ghosts and that we can overcome death,” he said. “I'd like to think we all will someday go on to a higher realm of existence.”

Not only will there be copies of “Ghosts of the Quad Cities” ($21.99) on sale, but they'll also have copies of many of their other books – including McCarty's new fiction book, “Dark Cities: Dark Tales,” with three short stories set in the Q-C. McLaughlin has a new book, “City of Living Shadows,” a collection with his frequent partner Michael Sheehan, Jr.

Comedy, rap, burlesque among the Valentine's Day entertainment options in the Quad-Cities

Don’t have any Valentine’s Day plans yet? You can choose from a variety of fun options in the Quad-Cities, including:

Here's a look at a few beloved musicians, athletes, actors and other stars we've said goodbye to so far in 2020.

Bottled Up: Don't miss Wine at the Warehouse March 7 in Davenport

Amid all of the excitement surrounding Valentine’s Day, it’s hard to believe that we are already fast approaching springtime in the Quad-Citie…

The cover of "Ghosts of the Quad Cities," published by The History Press.