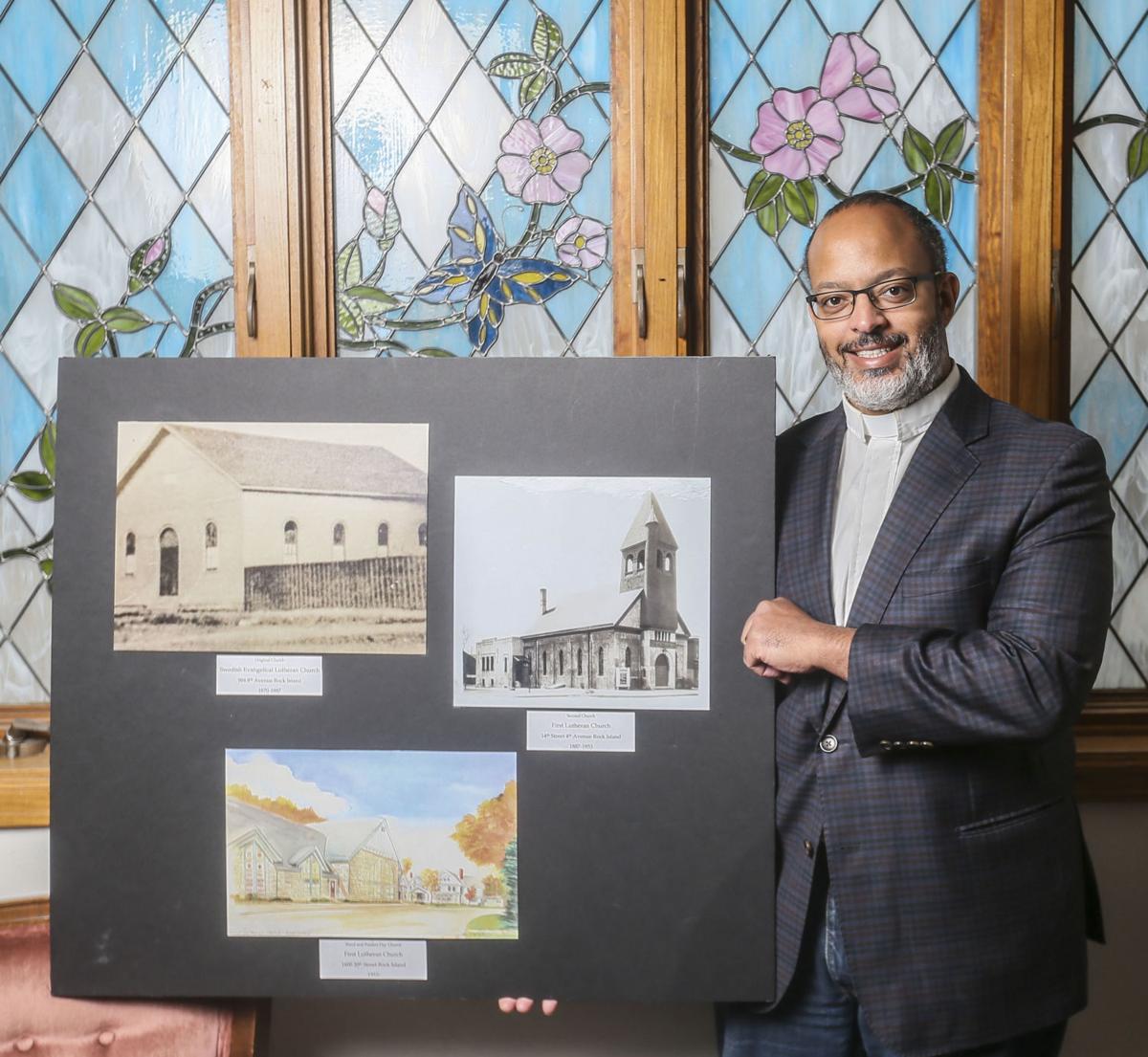 Rev. Chris Lee, Pastor at The First Evangelical Lutheran Church holds images of his church through the years. The church is celebrating its 150th anniversary. 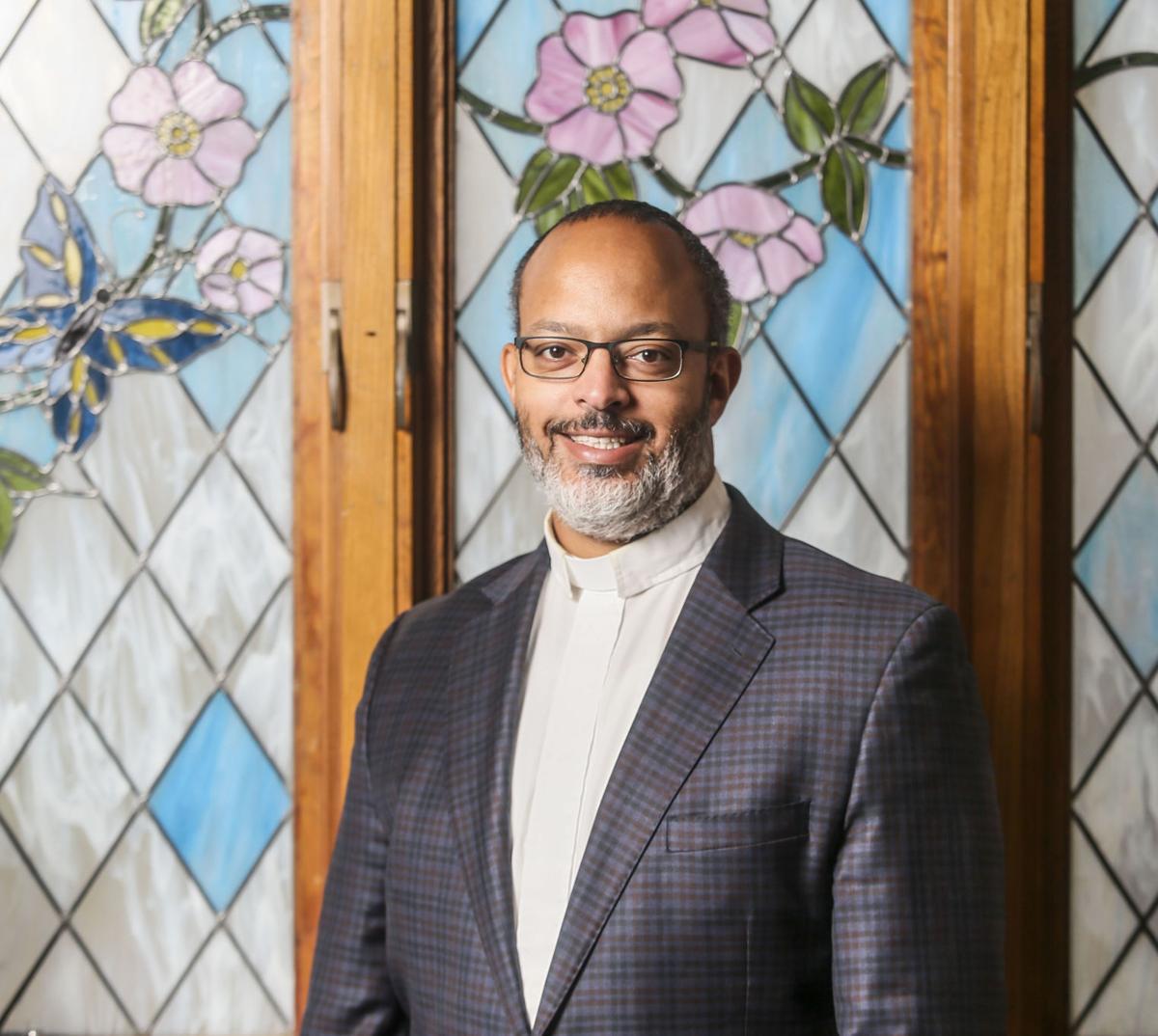 ROCK ISLAND – Milestones are being reached at First Lutheran Church in Rock Island, but can’t be celebrated because of COVID-19 restricts.

Such is the case for the church's 150th anniversary.

Ten years ago church members celebrated the 140th anniversary with the music production of “Gospel Animals,” and a dinner. Church members intended to celebrate First Lutheran’s golden birthday with a dinner theater revival, but that came to a halt with restrictions from the pandemic.

First Lutheran was founded Nov. 19, 1870, by Swedish immigrants and was called the Swedish Evangelical Church, with a membership of 80 adults and 24 children.

Sandy Stoit, a member of the church anniversary committee, said work began “immediately” on the first church building at 904 8th Ave. One of the first pastors of the church was the Rev. T.N. Hasselquist, president of Augustana College and Seminary.

Membership grew and they needed more space. A new church was built at 4th Ave and 14th Street, Rock Island, now Orr’s Mortuary. The church was completed in 1887 at a cost of $5,550.

Swedish was the language of the church, and a summer Swedish school was held for children of the congregation. “The Old Schoolhouse” was built at the back of the church and used for those classes.

In 1923, the official language of the church was changed to English and with that the church became the First Evangelical Lutheran Church.

Stoit said a Sunday evening service continued to be conducted in Swedish for the older members, but that soon disappeared.

“The ministers serving the church into the 1940’s were expected to be able to read the Bible in the Swedish language to the older members,” she said.

The congregation continued to grow, prompting another expansion. In 1948, the Rev. William Berg, discovered the availability of the property, “The Lindens,” a five-acre point on the hill where 17th and 20th Streets meet.

An 18-room house, built by Stuart and Grace Velie Harper in 1907, and a carriage house graced the acreage.

Church records show the owners decided to sell the property, but Rev. Berg still had to convince the congregation. On Jan, 13, 1948, the property and buildings were sold to First Lutheran Church for $50,000.

“Many church members considered this purchase extravagant,” Stoit said. “How to build on the property became an issue, and the increase in prices and the pending Korean War made building a new church impossible.”

Members decided instead to renovate the carriage house and stable into a church.

Groundbreaking was held on Oct. 19, 1952, and the old stable was varnished from floor to ceiling.

Stoit said the cross beams in the rear of the church are the same which carriages circled under so many years ago. The three rooms on the second floor where the property caretaker once lived became the choir and organ loft. The chancel at the south end of the church was added and a narthex was annexed to the building at the north end.

The church was dedicated Oct. 25, 1953. It was completed without a steeple, keeping with the simplicity of the stable, and the congregation planned to build a bell tower at the south end of the property when funds became available. The memorial bell tower was built and dedicated July 7, 1957.

The project was completed in 1990 and crosses were made from the old gold stained glass in the original windows and sold as mementos of the 115th anniversary of First Lutheran.

Gardens and benches have been added to the property, allowing for meditation, and a labyrinth has been added on the north lawn of the parish house.

The Rev. Greg Mayer was called to serve as pastor of the Rock Island church in 2001. He retired in 2014 and the Rev. Christopher Lee was called to First Lutheran in 2018.

Tickets cost $10 and reservations are requested by Nov. 1. For more information, visit firstlutheranri.org or call 309-788-9661.

Rev. Chris Lee, Pastor at The First Evangelical Lutheran Church holds images of his church through the years. The church is celebrating its 150th anniversary.