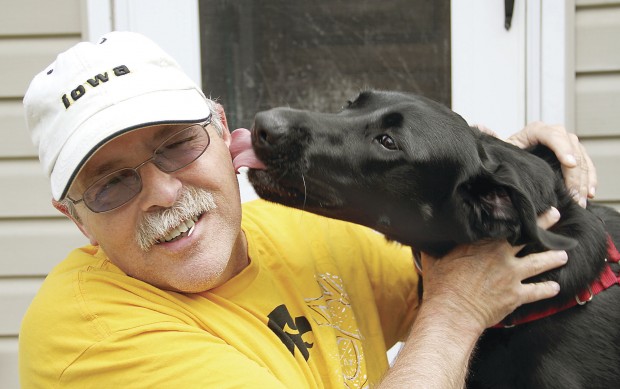 Denny Gray of Davenport gets a kiss from his Labrador puppy Misty. Gray, who is a Navy veteran of the Vietnam War, suffered a heart attack only last week ago, adding to his long history of health troubles. (Larry Fisher/QUAD-CITY TIMES) 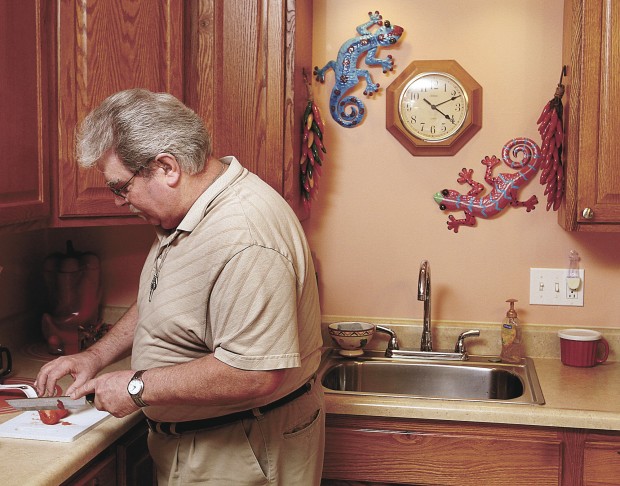 Vietnam veteran Bill Pinault works in the kitchen of his Davenport home. Pinnault loves to cook for his family and fellow members of Holy Family Catholic Church. (Jeff Cook/QUAD-CITY TIMES) 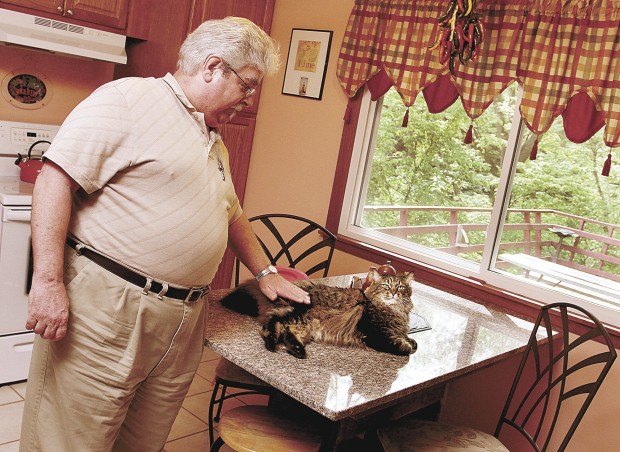 Bill Pinault greets Rascal, his family's pet cat. The Davenport man, who drove trucks loaded with Agent Orange during the Vietnam War, has battled diabetes for years and heart problems since the 1980s. (Jeff Cook/QUAD-CITY TIMES)

Before Dennis Flaherty and his fellow Marines set up a helicopter site in the jungles of Vietnam, a plane spread herbicides on the trees to clear a path.

"Agent Orange was sprayed along the flight lines," explained Flaherty, a 65-year-old veteran from Davenport. "We'd load planes with Agent Orange and other chemicals and then set the barrels down."

The orange-striped barrels that gave the contents their infamous name were later cut up to be used in latrines. Some were even rinsed out and fitted with racks on which to grill hamburgers, he said.

Denny Gray, 61, of Davenport, was in the U.S. Navy during 1968. He served on the U.S.S. Jamestown, which was permanently stationed in Vietnam. He got to spend a few days onshore in the South Vietnamese capital of Saigon, staying at the Presidential Hotel.

The three Vietnam veterans all are examples of people who developed chronic, debilitating diseases following their military service. Flaherty has Parkinson's disease, and both Pinnault and Gray have type 2 diabetes as well as ischemic heart disease - also called hardening of the arteries.

This past fall, the U.S. Department of Veterans Affairs expanded the definition of diseases associated with Agent Orange exposure to include heart disease, Parkinson's and chronic B-cell leukemia. Diabetes has been on the list for years, as are several types of cancer.

It is presumed that veterans who served in Vietnam from 1962 to ‘75 could have been exposed to the toxic substances and could develop one or more the illnesses blamed on exposure to them.

The U.S. Department of Veterans Affairs (which used to be called the Veterans Administration) offers these veterans health benefits and disability compensation, something that was not always the case, and the list of conditions presumed to be associated with exposure to Agent Orange has grown in the past 20 years. The department has recognized that several cancers, heart problems and other health concerns are related to exposure.

A registry was established in 1978, and health coverage has expanded in the years since then. Eligible veterans may now receive a full range of medical benefits, a free comprehensive health exam and monthly payments for those who have become disabled.

Area advocates - including David Woods, Scott County's director of veterans affairs - work hard to spread the word about the benefits. About 2.5 million people served in Vietnam during the war, he points out, and every veteran should know what he or she is entitled to.

What is Agent Orange?

Agent Orange is the code name for herbicides that were widely used in Vietnam for years to defoliate plants and trees that provided cover for enemy combatants. At the same time, the dispersal of it affected food supplies for both the Viet Cong and the country's rural residents. The name comes from the orange-striped 55-gallon drums in which it was stored.

Between 1961 and 1971, the U.S. military sprayed more than 19 million gallons of herbicides in Vietnam. Several types were used, but Agent Orange was the most common product, and it was applied in highly concentrated levels for part of that time.

The heavy toll on veterans

Gray is on full disability these days and suffered a heart attack only about a week ago. He has 15 stents in his heart and has battled diabetes for 30 years. He is single, enjoys riding his Harley-Davidson motorcycles, works in his garden and has a Labrador puppy.

Pinnault is employed in human resources at the Rock Island Arsenal and hopes to retire next year after 27 years at the facility. He has had diabetes for years and developed heart problems in the 1980s. He is married and loves to cook for both his family and the people of his faith at Holy Family Catholic Church in Davenport.

Flaherty, who is married, has adult children and is a grandfather. He is fully retired from 3E, Electrical Engineering and Equipment Co. in Davenport. He has halted most of his volunteer activities at St. Anthony's Catholic Church in Davenport.

Following his discharge from the Marine Corps, he was a distance runner until his "legs gave out" at the age of 52 years and he began to suffer from extreme fatigue. A visit to the VA clinic in Bettendorf led to the Parkinson's diagnosis.

The three veterans all said they appreciate how the Department of Veterans Affairs has helped them.

"It is a lot easier to get into and get the care and medication that you need," Pinnault said. Gray noted that almost all of his medications are now paid for, to the tune of about $150 a month.

The three veterans have experienced their share of frustration with government bureaucracy. It took Gray almost five years to receive full disability benefits, a wait stemming from the fact that he was in the Navy and is known as a "brown water" vet because he spent a relatively brief time on the ground in Vietnam.

Flaherty, who was in the Marine Corps, still has to authenticate his war service as a truck driver and has been at it for about six years, he said.

The Department of Veterans Affairs does have a backlog of cases, but it is working hard to clear that up, said Gloria Risius, a public affairs officer for the department in Des Moines. Cases such as Gray's can be very complicated in terms of trying to track down exact service orders from 43 years ago, she explained.

That said, there are almost 10 cases pending in the Des Moines office that involve ischemic heart disease, Parkinson's or the specific type of leukemia related to Agent Orange exposure, Risius said, with some other cases being handled elsewhere in the United States.

"We strongly encourage veterans to apply," she said.

A veteran's exposure to Agent Orange in Vietnam typically comes out in a medical history. That exposure is harder to prove in cases concerning the Navy vets, she added.

But the situation is improving. Woods, for example, speaks to veterans groups about their military benefits, as well as to doctors, nurses, "whoever will listen to me," he said. He tries his best to find out what wrong and shows vets the way to get help.

"We are getting the word out and getting these folks taken care of," he said.

Flaherty, a devout Catholic, is one veteran with no regrets about the past.

"Every day's a blessing," he said. "I'm grateful the Lord God let me come home and I had a chance to do good work. I wish I could have more time to enjoy my life, like a normal retired person. But that's just the way it works out. I can't complain. The Lord's been pretty good to me."

Sign up here to get the latest health & fitness updates in your inbox every week!

- To help comfirm service in the Vietnam War and eligibility for benefits, veterans should contact the U.S. Department of Veterans Affairs by …

Denny Gray of Davenport gets a kiss from his Labrador puppy Misty. Gray, who is a Navy veteran of the Vietnam War, suffered a heart attack only last week ago, adding to his long history of health troubles. (Larry Fisher/QUAD-CITY TIMES)

Vietnam veteran Bill Pinault works in the kitchen of his Davenport home. Pinnault loves to cook for his family and fellow members of Holy Family Catholic Church. (Jeff Cook/QUAD-CITY TIMES)