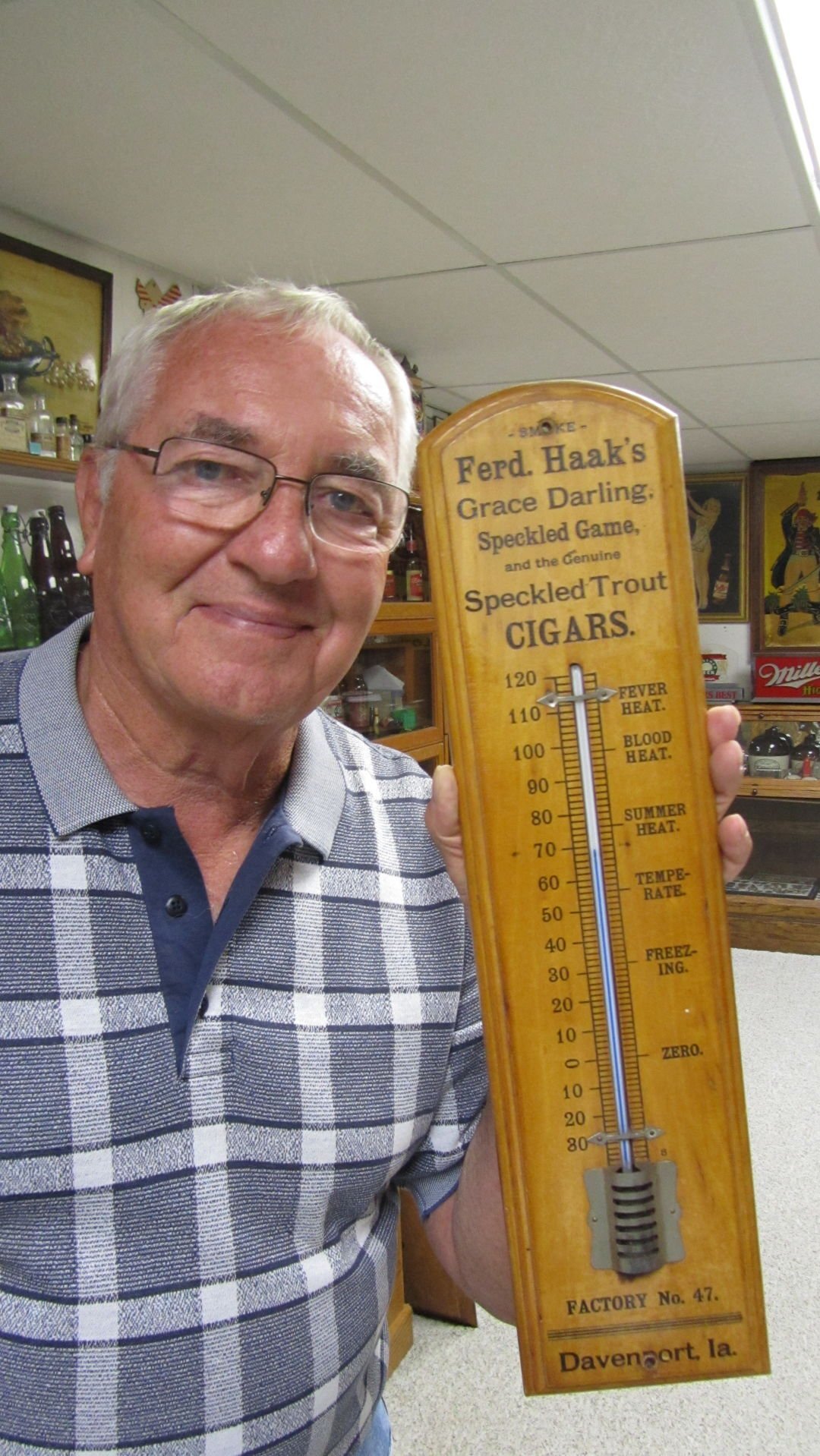 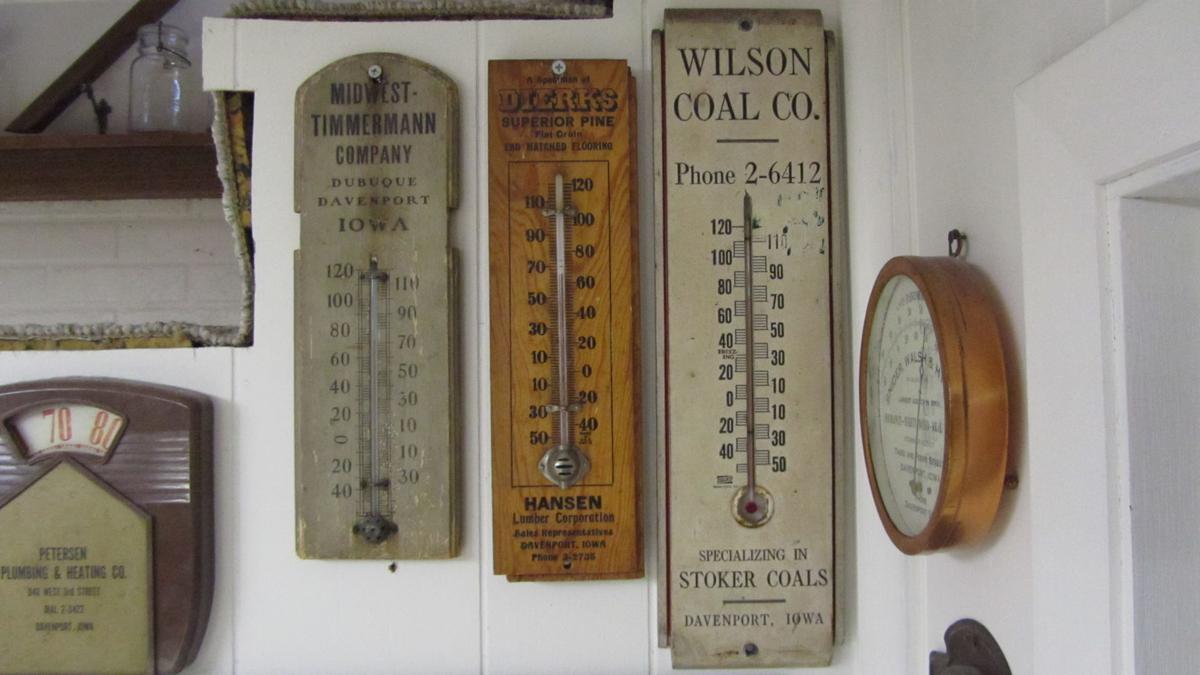 The thermometer in the middle is mounted on an actual piece of tongue-and-groove flooring. 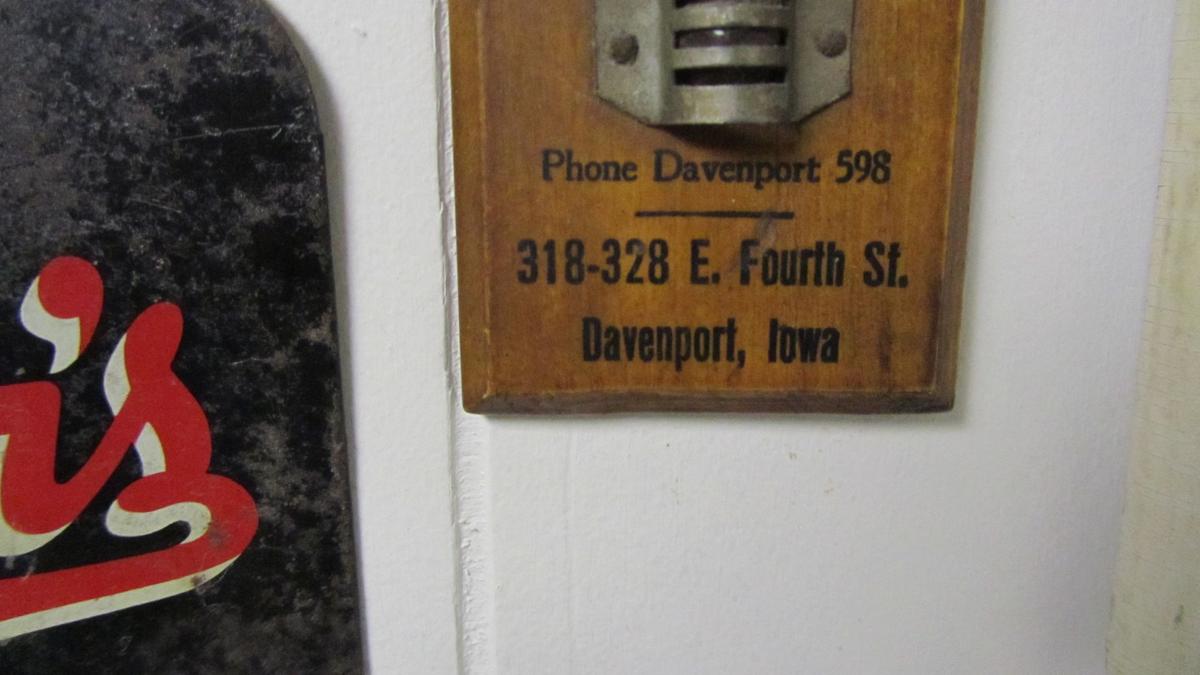 When telephones were new and scarce, phone numbers were shorter. Note the "598" for this company. 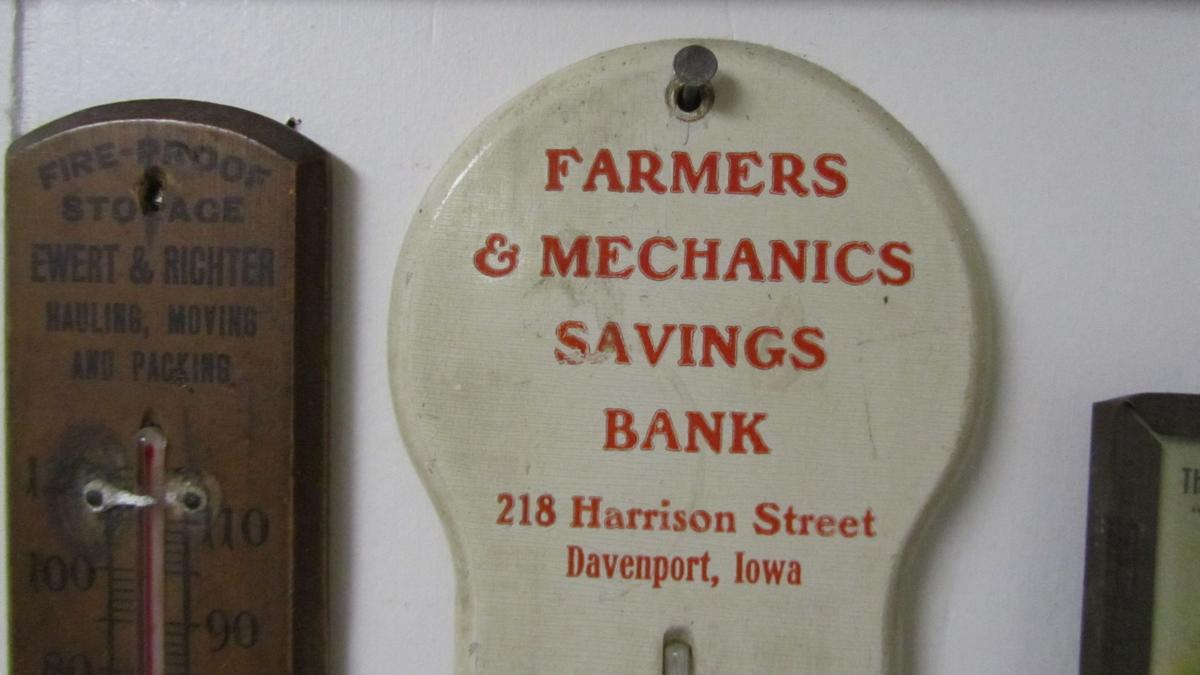 Most of Merle Vastine's thermometers came from businesses that no longer exist, such as this bank.

In the early 1900s, thermometers were a popular advertising give-away.

There were no newscasts reporting on the weather, so it was handy for people to check the temperature on a thermometer before going outside. Coat and hat, or will a jacket do? And, in checking, the person would be reminded of the sponsoring business.

Merle Vastine, a collector specializing in all things made in Davenport, has numerous thermometers hanging on a wall in his Davenport basement. For him, they're all about history. Most reflect companies that have long since disappeared, but whose memory is kept alive by the object.

You can see some of Vastine's collectibles on Sunday, Aug. 28, when they will be among the items for show and sale at the Mississippi Valley Antique Bottle and Advertising Show and Sale in Davenport.

Vastine has many favorites among his thermometers. The former Hansen Lumber Corp. had a thermometer mounted to an actual piece of tongue-and-groove flooring to advertise its Dierks Superior Pine.

While flooring and cigars are still made, some of Vastine's thermometers are from businesses whose whole reason for existing has disappeared. There's no need, for example, for companies that sell "stoker coal" because homes aren't heated with coal anymore.

But at least two of Vastine's thermometers are from companies still thriving today.

And the Lagomarcino Confectionary with its "'Ideal' ice cream, home made candy, fancy fruits and fountain lunch" hardly needs an introduction.

PennyWise Episode 39: Easy ways to save money on holiday decorations this year

Habits to avoid while being a houseguest

Habits to avoid while being a houseguest

Most contractors take their duty of good work seriously, but not all. Here’s a rundown of some of the most common scams and how to avoid them.

A savory year is in store for 2022 with the Garden Calendar produced by Iowa State University Extension and Outreach.

If you’ve ever saved up to buy a nice couch or armchair — or have one you inherited and absolutely love — you know how much it hurts the first time a glass of wine tips all over your favorite couch. First, don’t panic! A stain doesn’t mean the end for your couch. Just learn how to combat tough stains, and while you’re at it, get in the habit of regularly cleaning your furniture to keep it looking its best.

Ask the Builder: Building a safe fireplace and chimney

It’s that time of year when you might be thinking of starting your first indoor fire — if you haven't already gotten your fireplace or wood-burning stove going. I happen to have two wood-burning fireplaces in my own home. Both are see-through, so four rooms in my house get the benefit of a roaring fire.

The thermometer in the middle is mounted on an actual piece of tongue-and-groove flooring.

When telephones were new and scarce, phone numbers were shorter. Note the "598" for this company.

Most of Merle Vastine's thermometers came from businesses that no longer exist, such as this bank.