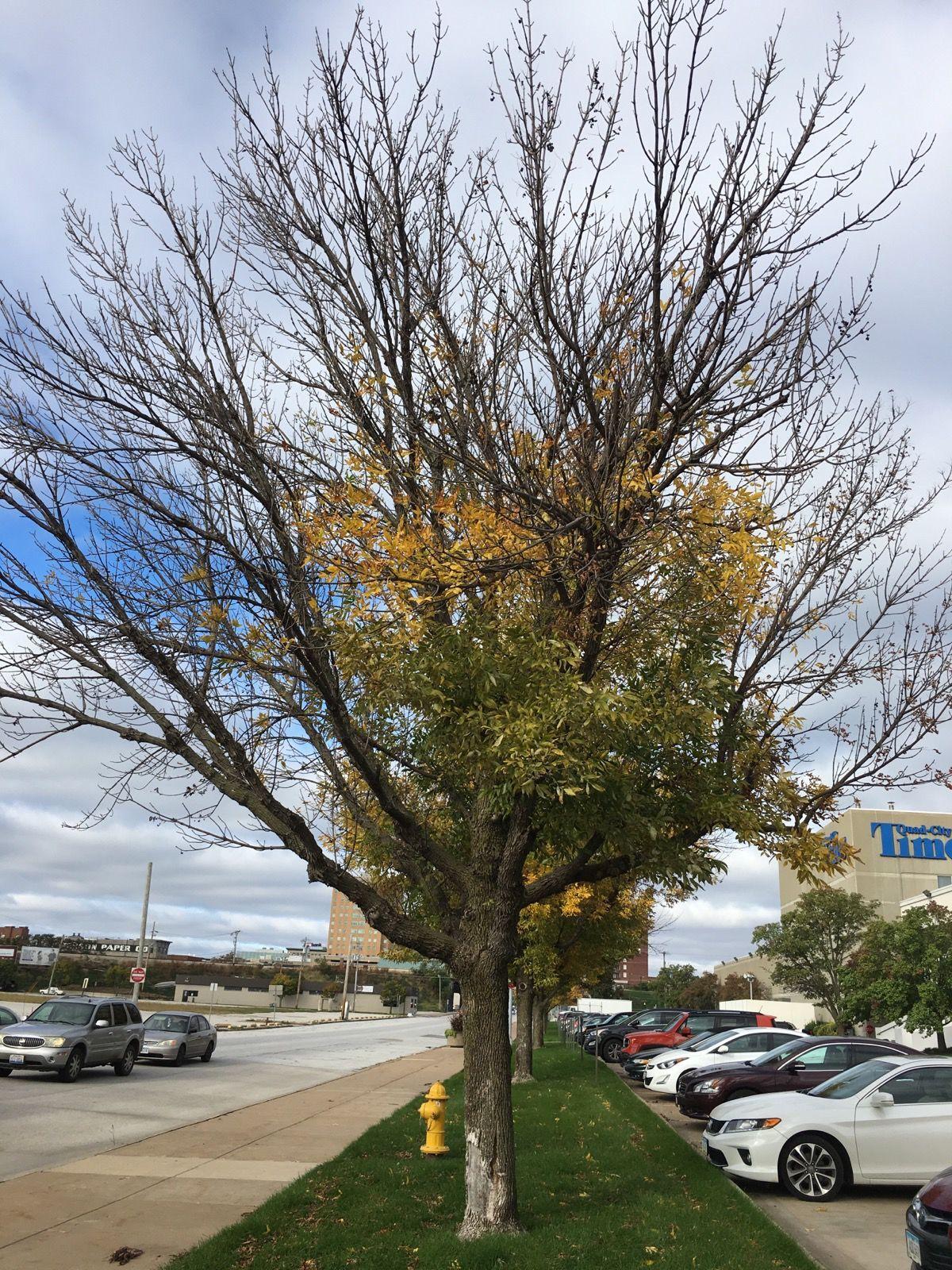 This is one of many dying ash trees in the Quad-Cities. 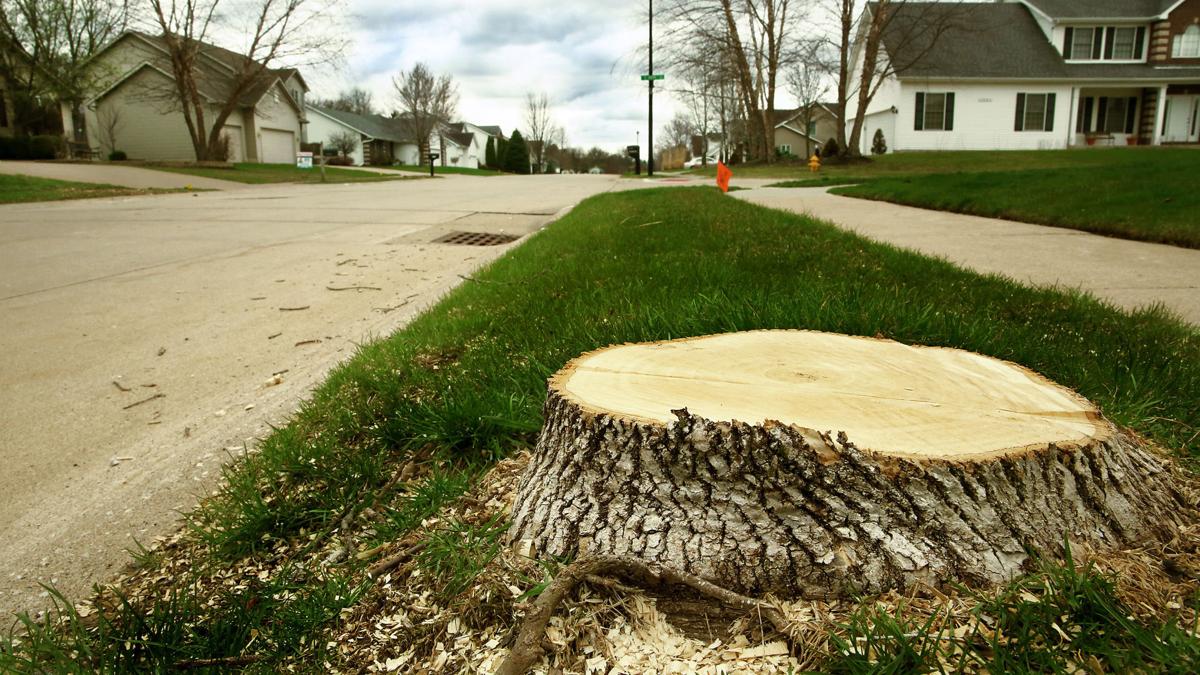 The emerald ash borer has taken up residence in the Quad-Cities in a big way, with untreated trees dying left and right. We'll see a lot more blank spaces in the years ahead. 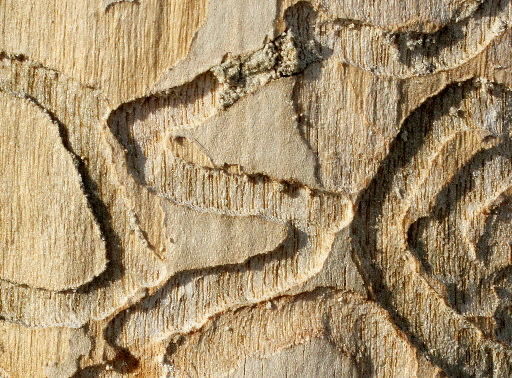 Emerald ash borer larvae create serpentine channels as they eat their way through the layer of a tree that supplies its nutrients, thereby choking the tree and causing it to die. The tree in this picture was in Rock Island.

The emerald ash borer (Agrilus planipennis) has plagued native ash trees in Illinois and Iowa since 2006 and 2010, respectively. This pest was first introduced in 2002 around the Detroit area and rapidly spread across Michigan and Indiana to infect most of Iowa and Illinois today.

"Sadly, the emerald ash borer will eventually wipe out our native ash species as we know them, leaving a major void in our urban forests and natural areas since ash is currently so prevalent," Ryan Pankau, a horticulture educator with University of Illinois Extension, said.

Two such past incidences have caused the virtual elimination of American elm and American chestnut trees across our continent.

The impact of chestnut blight was extensive. The American chestnut's native range spans more than 20 states in the eastern U.S., from Maine to Georgia, and accounted for about 50% of the eastern deciduous forest.

“Chestnut was a highly prized timber and wildlife tree, producing nuts for wildlife and even humans, as well as lumber of superior quality,” Pankau said. Chestnut wood has excellent resistance to rot with fiber as strong as many of the oak species we covet today. It was used for everything from structural lumber to fine furniture.

“It is just really hard to imagine how the disappearance of chestnut impacted life in the eastern United States, changing everything from timber products to the diversity of biota in eastern forests,” Pankau said.

Chestnut blight differs from emerald ash borer because it is fungal pathogen of chestnut as opposed to an insect pest. The fungus was first identified in its native land of China where it was hardly a pathogen of any significant threat, typically infecting dying twigs and bark.

"However, since our native chestnuts don’t have any co-evolutionary history with this pathogen, they have little resistance," Pankau said. Once established, the pathogen spreads from tree to tree by wind dispersion, creating cankers that grow rapidly and girdle stems.

Infected chestnut trees were first observed in New York City in 1904. By 1940, chestnuts were wiped out as a commercial species and active component of its original ecosystem. To this day, chestnut still exists in its home range because the roots and root collar are resistant, allowing sprouts from old root systems to grow before the pathogen attacks and kills the above-ground portion of the plant.

“The fate of American elm was determined by a combination of fungal pathogen and elm bark beetles, collectively referred to as Dutch Elm Disease,” Pankau said. “Very similar to the emerald ash borer, larvae of the elm bark beetle tunnel into the wood of elm trees.”

As the larvae feed on infected trees, they are exposed to fungal spores which they disperse after emerging as adults and feeding on other elm trees. Once introduced, the fungus grows into conductive tissues in the tree. As the tree’s defenses respond, the conductive tissue is clogged, stopping transport of water and nutrients, while the pathogen persists.

“It is an interesting relationship between insect and fungi, that is somewhat limited by the dispersion rate of beetles, spreading slower than wind-dispersed pathogens like Chestnut Blight,” Pankau said.

Dutch Elm Disease was introduced near Cleveland in the 1930s, reaching Chicago in the 1960s and the western limits of American elm’s natural range by the 1970s. Although American elm did not have the timber value of chestnut, it had a much more extensive range, extending from the east coast to the Dakotas and down to central Texas. It was a large component of eastern forests, occupying a wide range of environmental conditions.

“This adaptability made the elm an excellent urban tree that was widely planted, creating a huge impact to urban forests as the disease spread, much like what we are seeing with emerald ash borer today,” Pankau says.

Emerald ash borer is fatal to ash trees because the larvae eat the conductive tissue within branches and trunks, often causing death within two to five years of initial infection. The beetle does fly and disperse on its own, but human movement of firewood has rapidly advanced its spread. Ash trees are important timber species, as well as urban trees, comprising up to 50% of the urban forest in some cities.

“As an arborist, it has been very sad to watch the spread of emerald ash borer as it follows in the footsteps of past introduced outbreaks,” Pankau said.

Make your house a home

For the holidays: Get inspiring home and gift ideas – sign up now!

Comfort height toilets: What to consider before getting one

Most comfort height toilets are about the same height as a standard dining room chair, commonly called "chair height."

Hurricane season 2021: What do you put in your first-aid kit?

Stock your first-aid kit and store in a waterproof container • First-aid manual. • Sterile adhesive bandages in assorted sizes. • Sterile gauze pads and roller bandages in a variety of sizes. • Hypoallergenic adhesive tape. • Scissors and tweezers. • Needle, for sewing and removing splinters. • Bars of soap in their own plastic bags or waterproof containers. • Moist towelettes. • Antiseptic ...

How to choose the best spray faucet for your kitchen

Many pull-down and pullout kitchen faucets have different spray head features from which to choose. Here are some options to consider.

'An old house deserves a family': A Rock Island couple brought a house in the Broadway district back to life

Once a pink house with blue pillars, the Schmid's home in Rock Island’s Broadway Historic District is now honored by the Rock Island Preservation Society.

Earth Talk: What is a 'pollinator lawn' and how can I make one?

Turning your own lawn into a pollinator or “bee” lawn can help restore the kinds of natural habitat no longer available to pollinators.

Tips for growing your own tomatoes — from seed to fruit

Tomatoes are one of the easiest foods to grow yourself, but a little planning and care go a long way to make sure your plants prosper and produce the best crop.

This is one of many dying ash trees in the Quad-Cities.

The emerald ash borer has taken up residence in the Quad-Cities in a big way, with untreated trees dying left and right. We'll see a lot more blank spaces in the years ahead.

Emerald ash borer larvae create serpentine channels as they eat their way through the layer of a tree that supplies its nutrients, thereby choking the tree and causing it to die. The tree in this picture was in Rock Island.