Homefront: Horses were still in use when 1st span of Interstate 74 bridge opened
Share this
{{featured_button_text}}
1 of 7

The cover of a pamphlet celebrating the opening of the Iowa-Illinois Memorial bridge.

Inside pages of the pamphlet celebrating the opening of the Iowa-Illinois Memorial bridge. 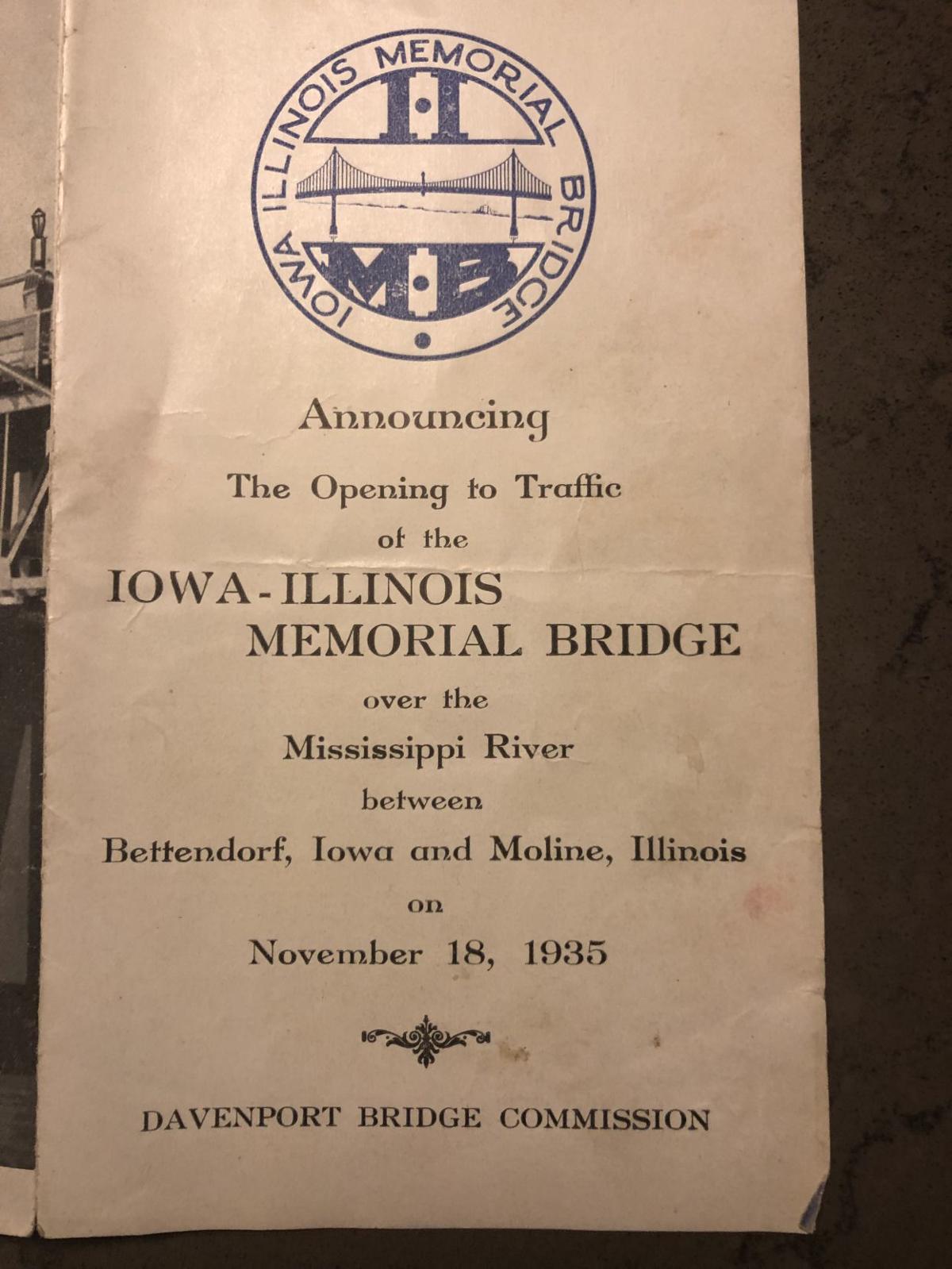 The cover of the 1935 bridge pamphlet. 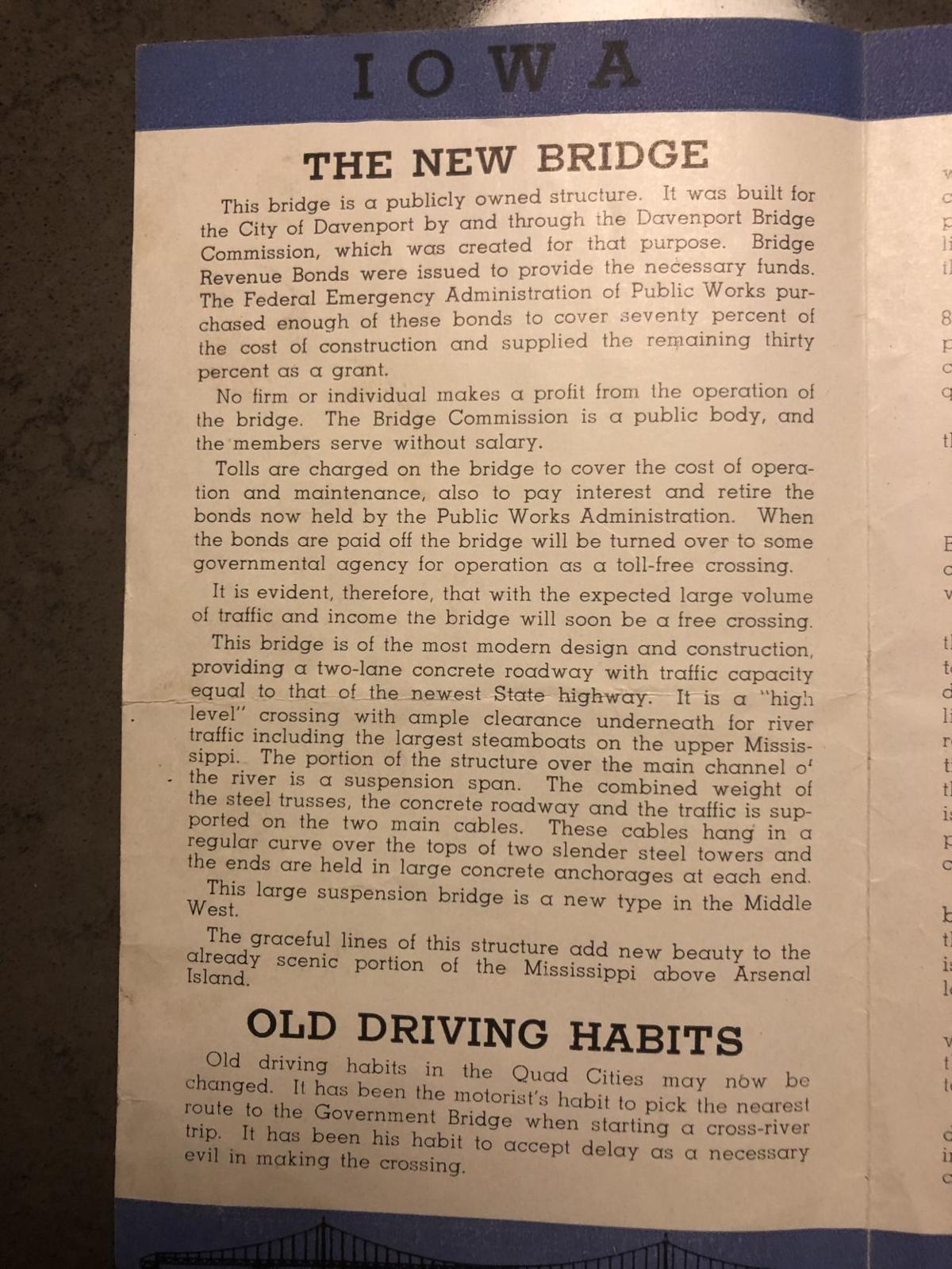 First page of the bridge pamphlet. 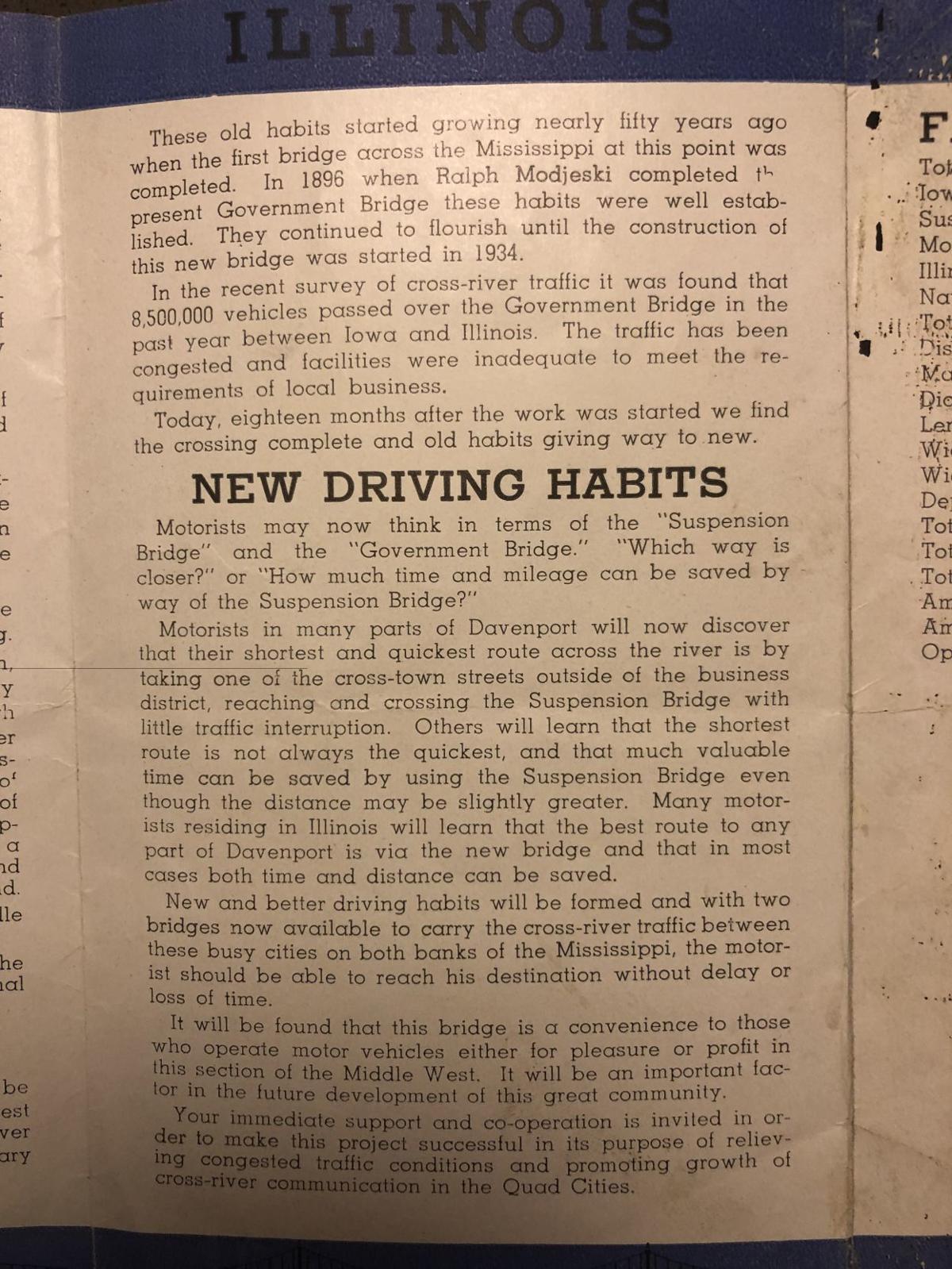 Second page of the bridge pamphlet. 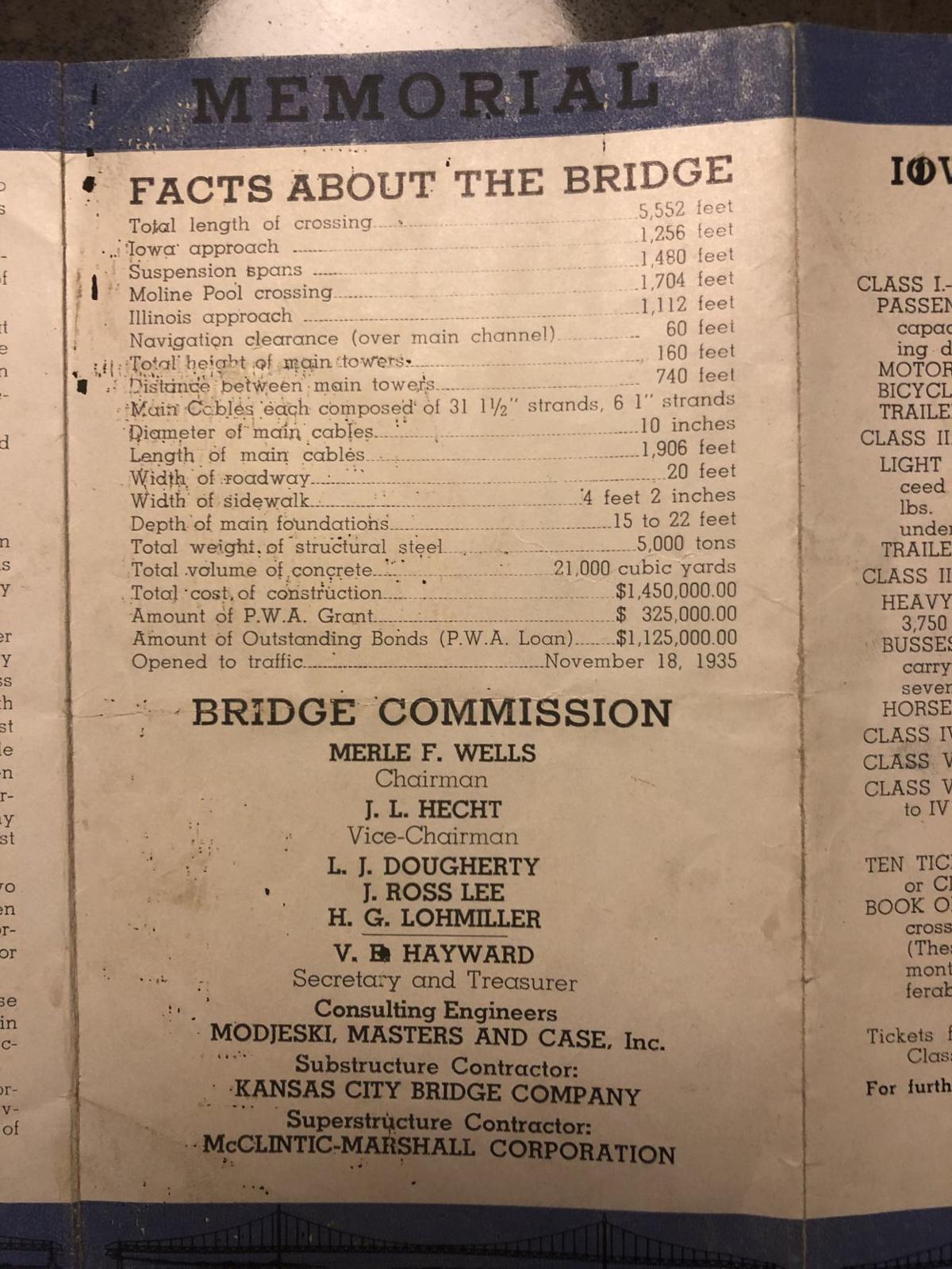 Third page of the bridge pamphlet. 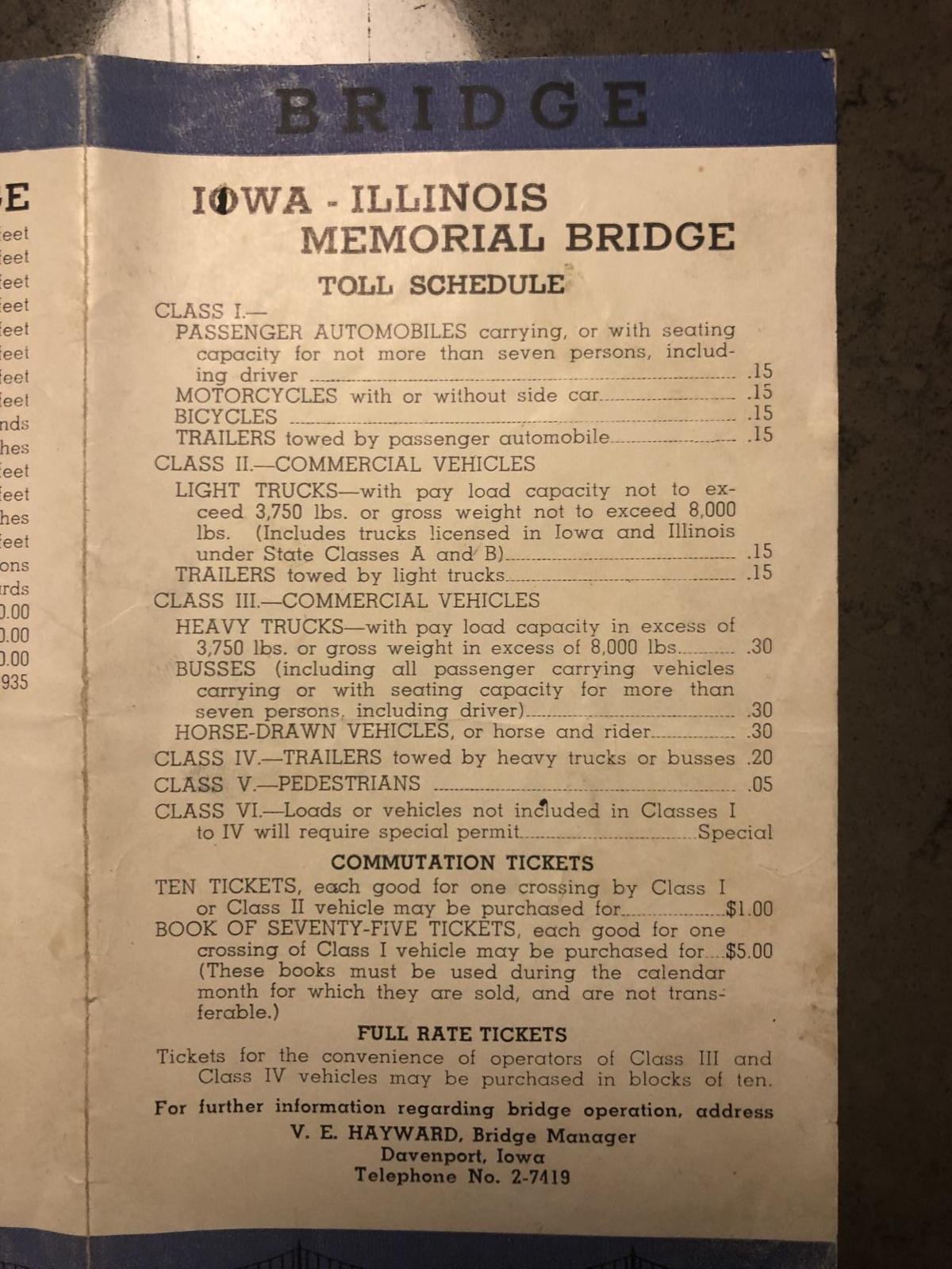 Fourth page of the bridge pamphlet.

The daily view of workers building the new Interstate 74 bridge prompted Lenore Knock, of Rock Island, to go digging through the "stuff" her parents kept over the years, in search of a pamphlet celebrating the opening of the  original Bettendorf-Moline span.

She found it, and it provides a peek into Quad-City history. I find the picture of just one span striking because I'm not used to seeing it that way. How different things are today.

Also really interesting is the chart listing the tolls that would be collected for crossing. Passenger cars, pedestrians (there was a sidewalk 4 feet, 2 inches wide), bicycles, light trucks and motorcycles could cross for 15 cents, but a horse-drawn vehicle or a horse and rider had to pay 30 cents.

Just the fact that the chart accounted for horses is interesting enough, but that they were charged more than motorized vehicles adds to that. Were bridge managers trying to discourage horses? Or were they accounting for extra work needed for clean-up?

Also interesting is that the bridge was constructed by an entity called the Davenport Bridge Commission. What?

I turned to researcher Karen O'Connor at the Richardson-Sloane Special Collections Center at the Davenport Public Library to see if she could shed some light on this.

The need for another bridge across the Mississippi was in the talking stages since the 1920s, according to a newspaper article from Oct. 23, 1966. At that time, there was only the Government Bridge between Davenport and Rock Island.

In 1928 a group of Quad-City businessmen organized to build a new bridge as a private toll venture and the group received a franchise from Congress. Ninety years later, their names still are recognizable — Bettendorf (the man, not the city), Von Maur, French, Hecht, Kohrs, Bechtel, Mueller, Adler, Lane and so on.

Then the stock market crashed and plans were put on hold. The men soon decided bridge-building should be a civic venture and assigned their rights to the city of Davenport.

On July 7, 1934, 70 men began work at the foot of Bettendorf's 14th Street, according to the newspaper account. Work also began simultaneously on the Illinois side. The bridge was formally dedicated as the Iowa-Illinois Memorial Bridge on Nov. 18, 1935 — a breathtakingly quick 16 months later!

So yes, the city of Davenport built — and until the 1970s, owned — the bridge in Bettendorf/Moline.

The first span cost $1.46 million. Bridge revenue bonds were issued to provide the money. The Federal Emergency Administration of Public Works purchased enough of the bonds to cover 70 percent of the cost of construction and awarded a grant to supply the remaining 30 percent.

Tolls were charged to operate and maintain the bridge and to pay interest on, and retire, the bonds held by the Public Works Administration.

The consulting engineers for the bridge were Modjeski, Master and Case, Inc.

At the beginning of his career, Ralph Modjeski also designed the Government Bridge, which opened in 1896. His firm's involvement in the Bettendorf/Moline bridge was a bookend to his career.

What the final cost and opening date of the bridge currently under construction turns out to be is a wait-and-see proposition.

Piecing the French property back together in McClellan Heights

The home now owned by Jim and Michelle Solis Russell was built during 1912-1914 by Nathaniel French, described as one of the most influential …

The cover of a pamphlet celebrating the opening of the Iowa-Illinois Memorial bridge.

Inside pages of the pamphlet celebrating the opening of the Iowa-Illinois Memorial bridge.

The cover of the 1935 bridge pamphlet.

First page of the bridge pamphlet.

Second page of the bridge pamphlet.

Third page of the bridge pamphlet.

Fourth page of the bridge pamphlet.