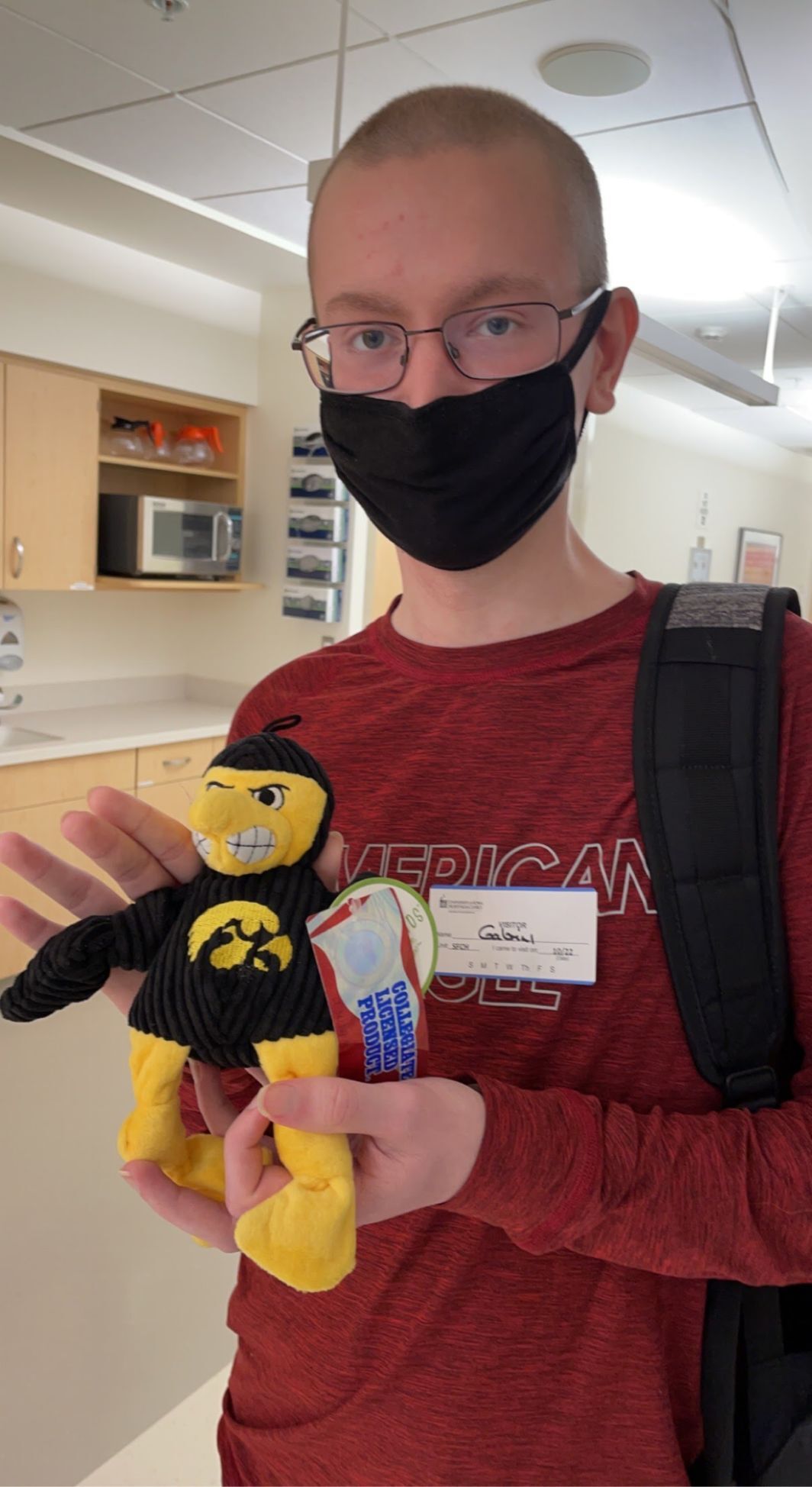 Gabe Sander with a Herky the Hawkeye doll that went into space on a SpaceX mission. Herky's voyage raised money for St. Jude's and The University of Iowa Stead Family Children's Hospital. 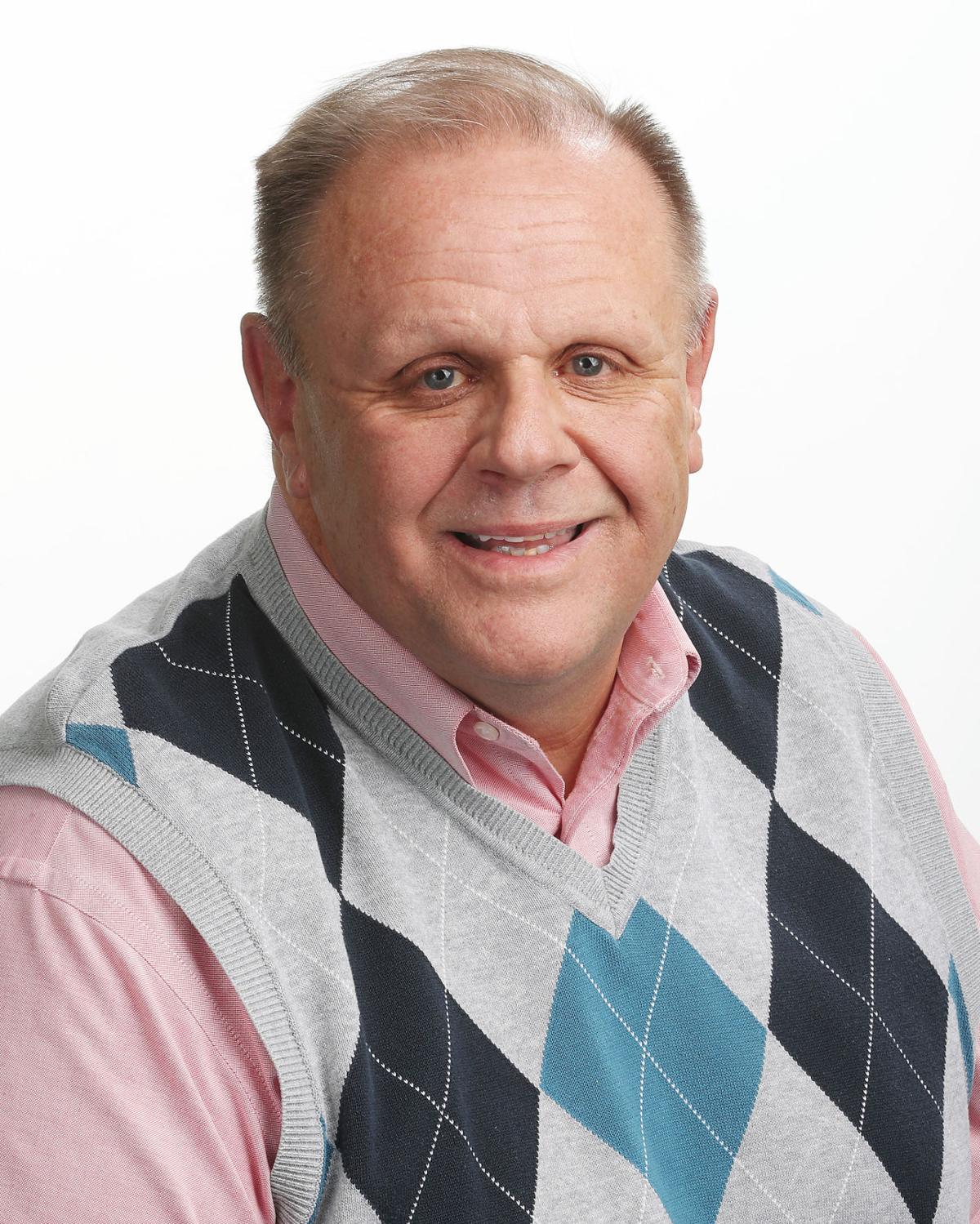 Gabe Sander possesses a clever, keen and uplifting wit. His unbending spirit and unique drive draw people to him.

Despite life throwing him the wickedest of curveballs, he lives to have a positive and lasting impact on the world. Fresh, fearless and modest to a fault, Sander is an inspiration to many.

The 19-year-old Davenport resident also digs space, enamored with the challenge it takes to reach it and taken with the exploration that surrounds it. He seeks to know and understand all that is cool above the clouds.

Sander also knows a good fight when it surrounds him.

Today, the tough-as-nails Sander, is in the late stages of a 17-month scrap with medulloblastoma, a central nervous system brain tumor, which in Sander’s case, was cancerous.

After an agonizing seven-week search for an answer to debilitating dizziness and nausea, the tumor required a nine-hour operation to remove it. That was followed by radiation five days a week and several rounds and months  of chemotherapy. Sander says his final batch of chemotherapy is slated for the week before Thanksgiving.

Though he continues to wage a battle for his own life, the health and well-being of others is never far from Sander’s creative mind and giving heart. He is truly a big-picture dude.

“What impressed me so much about Gabe was despite having surgery on his brain, being unable to drive or do most of the normal early adulthood activities, and undergoing so many cycles of chemo, he seemed to take it all in stride,’’ Perry said.

“He would find humor in the way his body behaved in his current condition. When his symptoms started, Gabe’s mother, Nikki, had to be a strong advocate to get her son’s symptoms taken seriously. With the support of his family, Gabe’s just going to quietly and confidently “do this thing over here.’’

And by “do this thing” I mean beat brain cancer and send things to space.

In September, Sander, a University of Iowa fan and someone impressed with the work that goes on at Iowa’s Stead Family Children’s Hospital, was offered the chance to make an impact on those the Stead serves.

He would give the Inspiration4 crew aboard the SpaceX A Crew Dragon a stuffed Herky the Hawkeye doll that would travel from lift off to landing aboard the world’s first orbital mission with no professional astronauts.

The flight was named to commemorate the four-person crew and their associated "pillars" of support for St. Jude Children's Research Hospital in Memphis, Tenn: leadership, hope, generosity and prosperity. The ship’s four occupants circled Earth for three days, splashing down off the Florida coast on Sept. 18.

Following its travels aboard the history-making mission, the Herky doll was donated and will be auctioned in the coming months to benefit research, development and the many amazing programs offered at Stead.

“The Herky idea came from a response I made to the Inspiration4 Twitter account,’’ said Sander, charting the path of Herky going into space and returning to make a difference in the lives of many. “The tweet asked, ‘What unique items or memorabilia should go to space? The Inspiration4 team wants your ideas. Some of these items may be auctioned to support St. Jude.’’

“I sent an email with my idea to send Herky to space hoping that it could be auctioned or raffled to benefit The University of Iowa Stead Family Children’s Hospital but thought it would still be awesome if it could support the research done for childhood cancer at St. Jude’s,’’ Sander added.

“I got an email from Scott Poteet saying they’d love to send him to space. Scott Poteet, come to find out, was the mission director for Inspiration4. I wanted to give them an idea they couldn’t refuse and as a 19-year-old, I don’t need a stuffed animal. After Inspiration4 returned, I got an email asking where I would like Herky sent so I had him sent to the Stead Family Children’s Hospital.’’

Sander’s idea and generous nature led to a touching pre-launch offer from Poteet, the Inspiration4 crew and the SpaceX community.

“In one of the follow up emails to Scott, I asked if I could come watch expecting that he would provide an address to come view with us paying for the trip and hotel,’’ Sander said. “This was not the case. They paid for me, my dad and my older brother’s airfare and hotel. We also were invited to attend all the special tours and parties that occurred that week. These VIP events were mostly attended by the friends and families of the crew, some SpaceX employees and some St. Jude employees. We felt so fortunate to be included in that group. I got to thank Scott personally in a facility called Hanger X, an 8-stage booster refurbishment facility. The booster with the most flights in the hanger was eight but that’s not the current record; that’s 10. They only allowed seven people in Hanger X that day and I was one of them."

Fighting cancer has changed the way Sander approaches life. Unchanged is the appreciation for all he has, his family and tremendous support system, which will always remain in place. Today, though, there are specifics to what he is chasing. Sander is simply wise beyond his years.

“My goals have changed since my cancer diagnosis,’’ Sander said, noting he has 12 hours of college credit on his resume, but his plans to return to work and school are on hold for the moment.

“I want to do the things that are important to me and live simply,’’ he added. “I want to work on getting my private pilot’s license and live small. I want to build a tiny house on a gooseneck trailer. It will be entirely solar powered.I bought an electric vehicle. Even though I don’t drive much, we take that back and forth to my appointments in Iowa City. It already has 12,500 miles on it and it’s saved me over $1,000 in gas.’’

Here’s hoping for a simple life for an amazing young man fighting a complicated disease.

Columnist John Marx can be reached at newsroom@qctimes.com.

PennyWise Episode 40: How to be sure your donation makes an impact

PennyWise Episode 40: How to be sure your donation makes an impact

Revamp your workplace wardrobe with these money saving tips

Revamp your workplace wardrobe with these money saving tips

Gifts for couples who have everything

Gifts for couples who have everything

It is but a shade past six on a dark, late-fall morning.

Gabe Sander with a Herky the Hawkeye doll that went into space on a SpaceX mission. Herky's voyage raised money for St. Jude's and The University of Iowa Stead Family Children's Hospital.