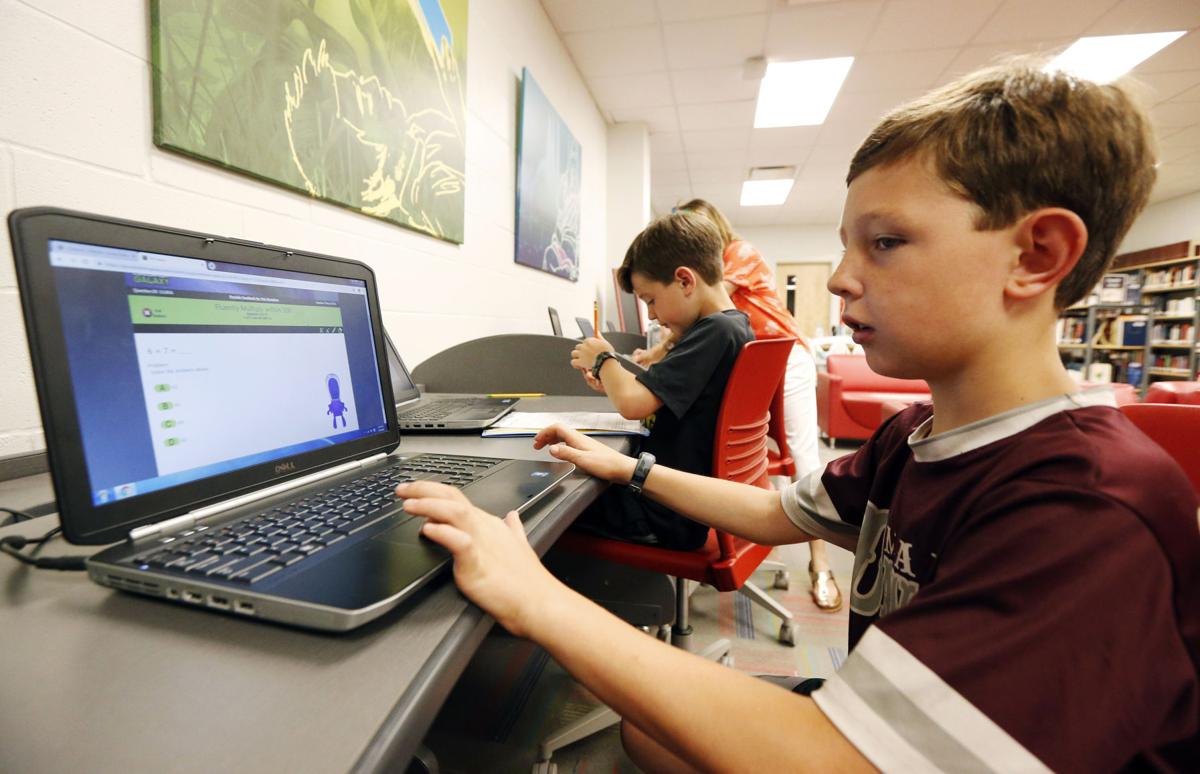 In this May 8, 2019, photo, third-grade student Miles Stidham uses an East Webster High School laptop to do homework in Maben, Miss. The Stidhams are unable to get internet at their home in the country, so they take advantage of the internet in the school's library. (AP Photo/Rogelio V. Solis) 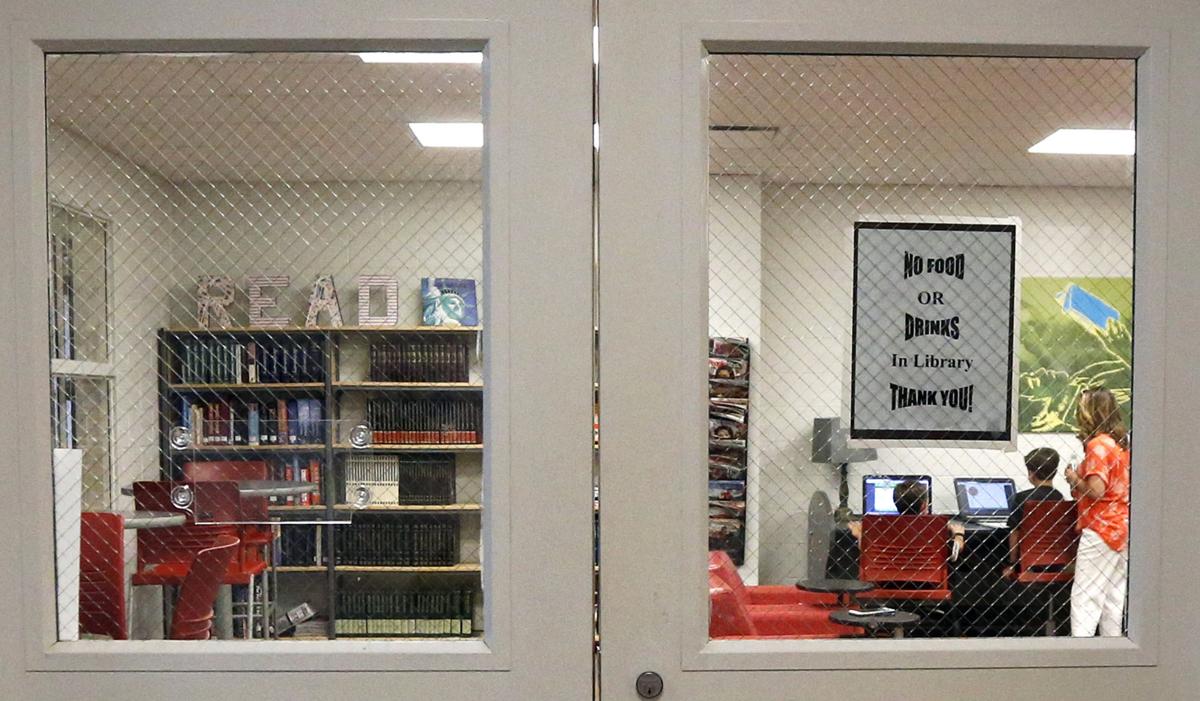 In this May 8, 2019, photo, the Stidham family does homework in the library of the East Webster High School, in Maben, Miss. The Stidhams are unable to get internet at their home in the county, so they take advantage of the internet in the school's library to work on their homework. (AP Photo/Rogelio V. Solis)

HARTFORD, Conn. (AP) — With no computer or internet at home, Raegan Byrd's homework assignments present a nightly challenge: How much can she get done using just her smartphone?

On the tiny screen, she switches between web pages for research projects, losing track of tabs whenever friends send messages. She uses her thumbs to tap out school papers, but when glitches keep her from submitting assignments electronically, she writes them out by hand.

"At least I have something, instead of nothing, to explain the situation," said Raegan, a high school senior in Hartford.

She is among nearly 3 million students around the country who face struggles keeping up with their studies because they must make do without home internet. In classrooms, access to laptops and the internet is nearly universal. But at home, the cost of internet service and gaps in its availability create obstacles in urban areas and rural communities alike.

In what has become known as the homework gap, an estimated 17% of U.S. students do not have access to computers at home and 18% do not have home access to broadband internet, according to an Associated Press analysis of census data.

Until a couple of years ago, Raegan's school gave every student a laptop equipped with an internet hot spot. But that grant program lapsed. In the area surrounding the school in the city's north end, less than half of households have home access.

School districts, local governments and others have tried to help. Districts installed wireless internet on buses and loaned out hot spots. Many communities compiled lists of wi-fi-enabled restaurants and other businesses where children are welcome to linger and do schoolwork. Others repurposed unused television frequencies to provide connectivity, a strategy that the Hartford Public Library plans to try next year in the north end.

Some students study in the parking lots of schools, libraries or restaurants — wherever they can find a signal.

The consequences can be dire for children in these situations, because students with home internet consistently score higher in reading, math and science. And the homework gap in many ways mirrors broader educational barriers for poor and minority students.

Students without internet at home are more likely to be students of color, from low-income families or in households with lower parental education levels. Janice Flemming-Butler, who has researched barriers to internet access in Hartford's largely black north end, said the disadvantage for minority students is an injustice on the same level as "when black people didn't have books."

Raegan, who is black, is grateful for her iPhone, and the data plan paid for by her grandfather. The honors student at Hartford's Journalism and Media Academy tries to make as much progress as possible while at school.

Classmate Madison Elbert has access to her mother's computer at home, but she was without home internet this spring, which added to deadline stress for a research project.

"I really have to do everything on my phone because I have my data and that's it," she said.

Administrators say they try to make the school a welcoming place, with efforts including an after-school dinner program, in part to encourage them to use the technology at the building. Some teachers offer class time for students to work on projects that require an internet connection.

English teacher Susan Johnston said she also tries to stick with educational programs that offer smartphone apps. Going back to paper and chalkboards is not an option, she said.

"I have kids all the time who are like, 'Miss, can you just give me a paper copy of this?' And I'm like, 'Well, no, because I really need you to get familiar with technology because it's not going away,'" she said.

A third of households with school-age children that do not have home internet cite the expense as the main reason, according to federal Education Department statistics gathered in 2017 and released in May. The survey found the number of households without internet has been declining overall but was still at 14 percent for metropolitan areas and 18 percent in nonmetropolitan areas.

A commissioner at the Federal Communications Commission, Jessica Rosenworcel, called the homework gap "the cruelest part of the digital divide."

In rural northern Mississippi, reliable home internet is not available for some at any price.

On many afternoons, Sharon Stidham corrals her four boys into the school library at East Webster High School, where her husband is assistant principal, so they can use the internet for schoolwork. A cellphone tower is visible through the trees from their home on a hilltop near Maben, but the internet signal does not reach their house, even after they built a special antenna on top of a nearby family cabin.

A third of the 294 households in Maben have no computer and close to half have no internet.

Her 10-year-old son, Miles, who was recently diagnosed with dyslexia, plays an educational computer game that his parents hope will help improve his reading and math skills. His brother, 12-year-old Cooper, says teachers sometimes tell students to watch a YouTube video to help figure out a math problem, but that's not an option at his house.

On the outskirts of Starkville, home to Mississippi State University, Jennifer Hartness said her children often have to drive into town for a reliable internet connection. Her daughter Abigail Shaw, who does a blend of high school and college work on the campus of a community college, said most assignments have to be completed using online software, and that she relies on downloading class presentations to study.

"We spend a lot of time at the coffee shops, and we went to McDonald's parking lot before then," Abigail said.

At home, the family uses a satellite dish that costs $170 a month. It allows a certain amount of high-speed data each month and then slows to a crawl. Hartness said it's particularly unreliable for uploading data. Abigail said she has lost work when satellites or phones have frozen.

Raegan says she has learned to take responsibility for her own education.

"What school does a good job with," she said, "is making students realize that when you go out into the world, you have to do things for yourself."

My son took the ball at midfield, bolted up the line and blew past the defender, all grass between him and the goalie. Everyone saw what happened next. Our coaches were yelling. Parents were screaming. A mom on the opposing team cringed and laughed. She saw it. I remember her smug little face.

Vaping marketing: Many warn vaping is a dangerous, deadly habit targeted at kids

What should schools do when a second-grader makes a threat?

Earlier this month, mom Amber Dunevant was told that one of her 7-year-old daughter’s classmates had put her daughter on a “kill list” at Parkview Elementary in Chula Vista, Calif.

Jamie Heit has spent precious little time obsessing over the daily coronavirus tally. She’s worried, for sure. But she’s got her hands full playing substitute teacher and traffic cop in one of the countless households dealing with pandemic-induced cabin fever.

In this May 8, 2019, photo, third-grade student Miles Stidham uses an East Webster High School laptop to do homework in Maben, Miss. The Stidhams are unable to get internet at their home in the country, so they take advantage of the internet in the school's library. (AP Photo/Rogelio V. Solis)

In this May 8, 2019, photo, the Stidham family does homework in the library of the East Webster High School, in Maben, Miss. The Stidhams are unable to get internet at their home in the county, so they take advantage of the internet in the school's library to work on their homework. (AP Photo/Rogelio V. Solis) 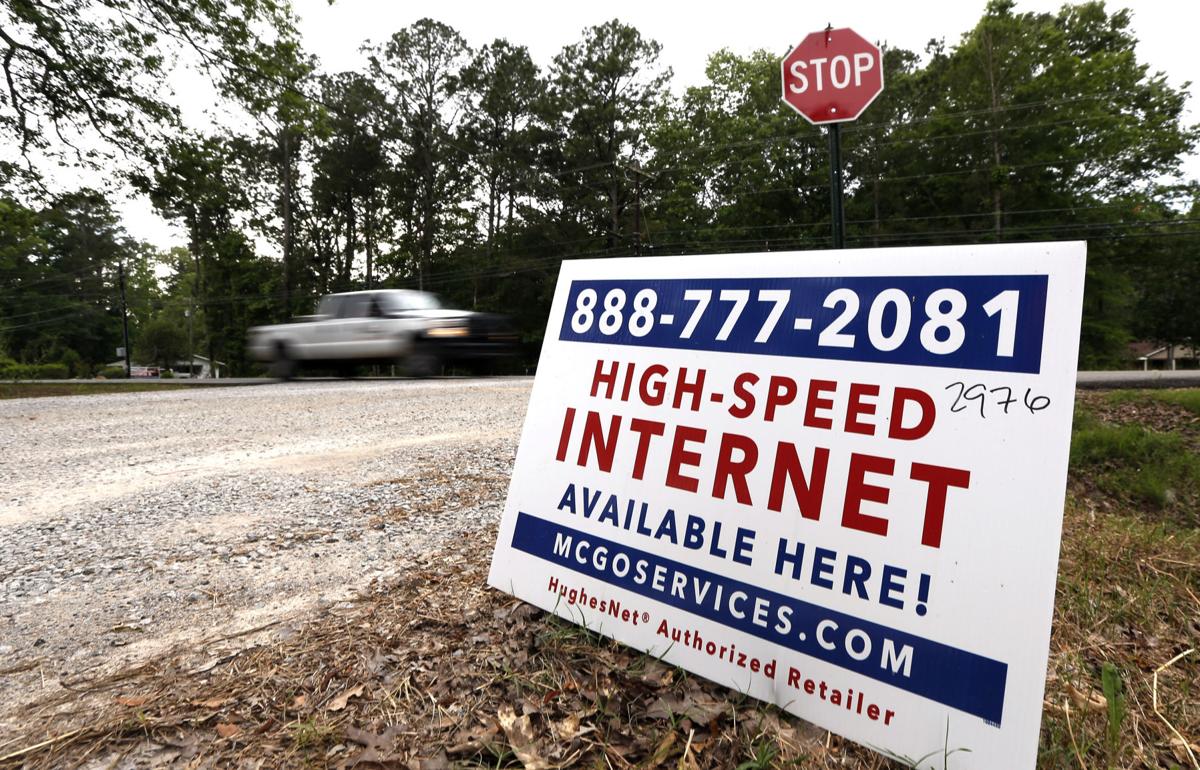 In this May 8, 2019, photo, a car drives past a sign advertising high-speed internet service near Starkville, Miss. In classrooms, access to laptops and the internet is nearly universal. But many students struggle to keep up from home because of the cost of internet service and gaps in its availability. (AP Photo/Rogelio V. Solis) 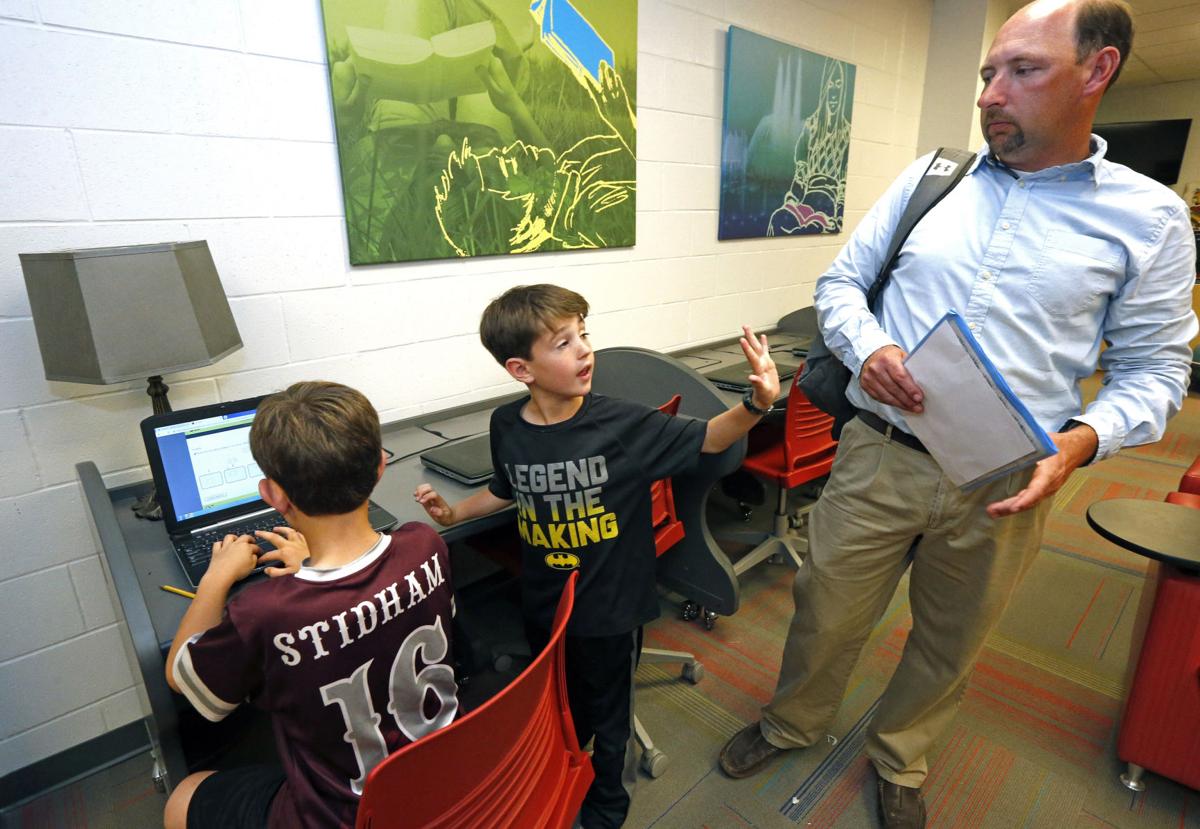 In this May 8, 2019, photograph, Graham Stidham, center, asks his father, East Webster High School Assistant Principal Corey Stidham, for a few more minutes of internet use so his brother, Miles, left, can finish his educational game, at the school's laptop bank in Maben, Miss. The Stidhams are unable to get internet at their rural home, so they take advantage of the internet in the school's library to do homework. (AP Photo/Rogelio V. Solis) 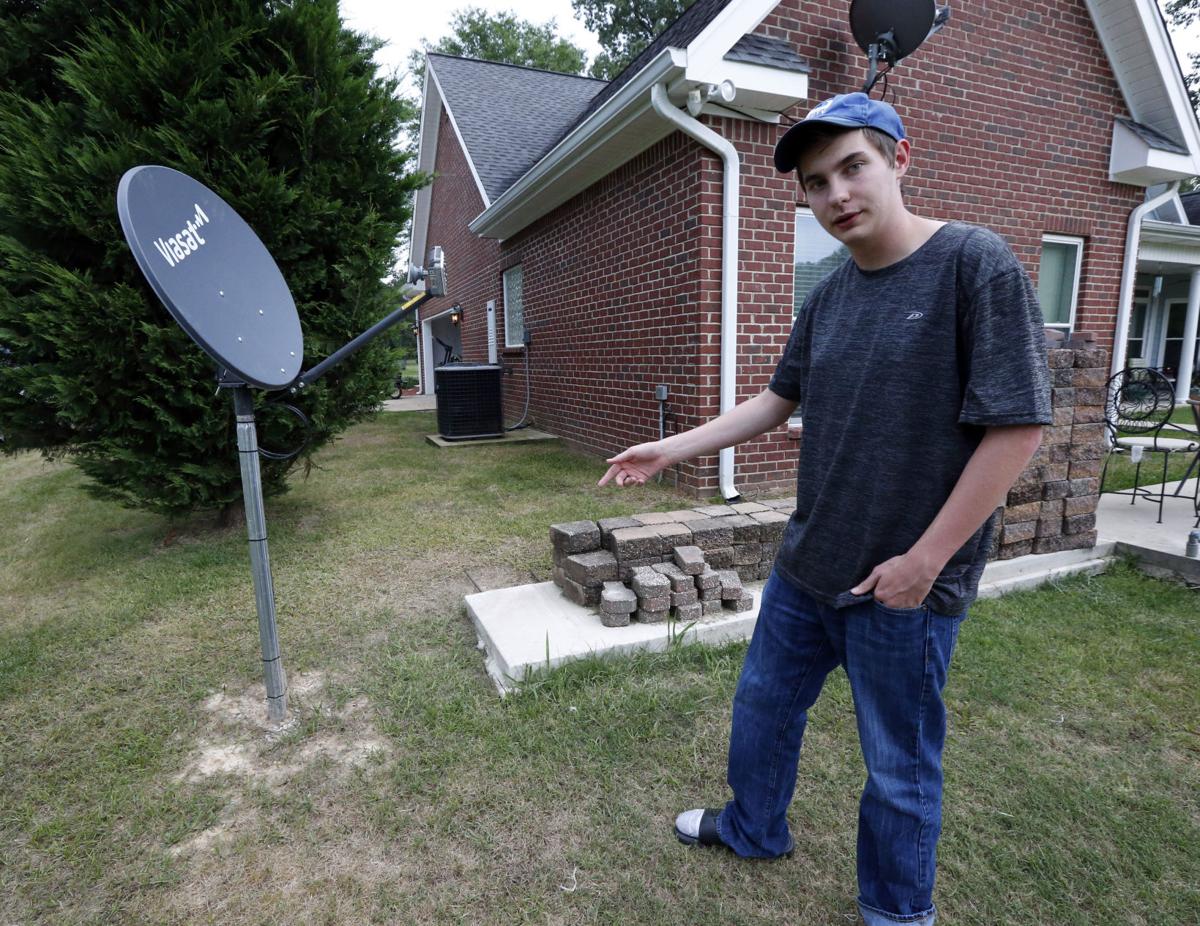 In this May 8, 2019, photo, Riley Shaw talks about his family's internet at his home outside Starkville, Miss. The satellite dish allows a certain amount of high-speed data each month and then slows to a crawl. (AP Photo/Rogelio V. Solis) 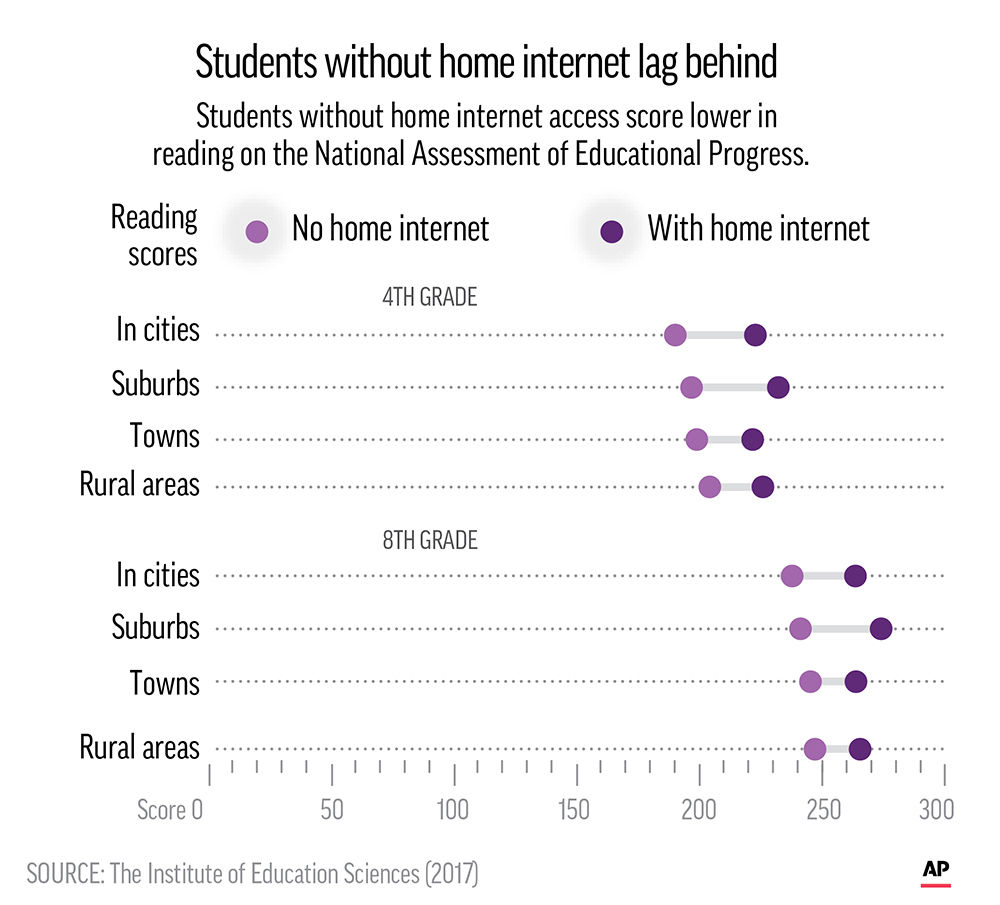 Students without home computers lag behind.;