If you have a pet, you’ve probably wished at some point that it could talk to you. Too bad that’s impossible ... or is it? Alexis Devine would tell you that her dog can — in a way.

Devine, an artist in Tacoma, Wash., has had Bunny, a female Sheepadoodle, for a year. And in that time, Devine says she’s introduced Bunny to more than 50 words by teaching her to press buttons that play words out loud.

For instance, as seen in videos Devine has posted on social media, if Bunny wants to go to the park, she’ll press a button that says “park.” Or, if she wants to play, she’ll hit the button for “play.” Those posts on Instagram and TikTok have become wildly popular, with the duo amassing over 300,000 followers on Instagram and 3.4 million followers on TikTok.

Over the past year, Bunny's owner Alexis Devine has been teaching her to use an intricate system of buttons with words or phrases to communicate — and it's working! https://t.co/ZFOMjnBgt5

Devine was inspired after finding, on Instagram, Christina Hunger, a speech-language pathologist who teaches her dog, Stella, how to communicate with buttons.

“My goal before I got her was that I wanted to have the most connected, engaged relationship possible and just see what the possibilities are,” Devine said. “I feel like there’s so much potential in animal relationships and I really wanted to make the most of it.”

Devine uses puzzle-piece-like boards called HexTiles to hold the buttons in place. The HexTiles are made by FluentPet, which is owned by CleverPet, a company founded by cognitive scientist Leo Trottier. Trottier said those who test the HexTile prototype, like Devine, don’t get paid to use them, but they do get money when they refer customers with a link.

The buttons are organized using the Fitzgerald Key, a system developed by Edith Fitzgerald, a teacher who thought it would be easier for deaf children to learn sentence structure if words were grouped in sentence parts such as people, actions, places and things. The buttons are used as a tool for augmentative and alternative communication (AAC), a practice that speech-language pathologists use with nonverbal people to communicate.

While Devine was open to trying the buttons, they were never something she forced on Bunny. She said they were on the back burner while she was teaching Bunny basic obedience as a puppy.

“If it works, it works — cool, and if it doesn’t, you know, whatever, fun experiment,” Devine said of her approach to the buttons.

Despite this, Bunny ended up being interested in the buttons and took to them quickly, Devine said, adding that Bunny will initiate conversations throughout the day.

So how does Bunny learn to use the buttons? Devine said a lot of it is from repetition. Normally when Devine adds words, she’s already using the word in conversation with Bunny. The hope, she said, is that Bunny has already built an association with that word.

Then, to help her learn the button’s position on the tiles, Devine will repeat the word and reinforce the behavior after Bunny presses a button. For example, their first button said “outside.” They put it by the door, and every time they would go outside, Devine would press the button, then say the word “outside,” and let Bunny out.

Going by Devine’s videos, Bunny can also make sentences — well, her version of sentences. Devine said Bunny learns where the buttons are located through muscle memory and through the sound of the button, kind of like how a pianist can play a song without looking at the keys. So, for example, if she wants to play tug, she’ll hit the buttons for “play,” “tug” and “now.”

If you’re skeptical as to whether Bunny actually knows what she’s saying, rather than randomly pressing buttons, Devine is with you. She said she has moments of skepticism all the time.

“It seems to me, for her to have a full comprehension of all this it would, should, take years,” she said.

However, Devine said it sometimes really seems like Bunny has a clear understanding of what her owner is saying. For example, during the interview, as Devine was talking about her skepticism, Bunny pressed the buttons for the words “cat,” “friend” and “outside” because she saw a cat outside, Devine said. But other times, it seems more random — and Devine thinks it’s important to remain skeptical.

“It’s very, very up and down for me,” she said. “I’ve always sort of considered myself a hopeful skeptic. I think it’s going to take a lot more time and a lot more research to know exactly what’s going on and how much comprehension actually exists.”

Get a dose of adorable in your inbox

Receive local adoptable pets PLUS updates for pet lovers in your inbox every week!

Looking to improve your heart health? You might want to think about getting a dog.

A Tennessee police department is mourning the loss of Sjaak, a K-9 officer that died after being shot three times when a man opened fire on a patrol car.

Go fish: Tips for setting up aquarium in your home

If you want to set up your first aquarium, you might be wondering how to get started and which fish species to adopt. Here are some tips.

Dogs by the dollars: Here's the cost of owning a canine

Rover.com has broken down the dollars-and-cents angle of owning a dog. From initial costs to surprise expenses, here are some figures to consider.

Studies show that people who have a dog exercise more and spend more time outside, when compared with those who don’t, says Kazi. This is true simply because people have to walk their dogs and care for them. Both the exercise and the outdoor time can bring benefits, such as lowering blood pressure and cholesterol and improving heart rate.

Demographic data show that dog owners are more likely to be married, which has been linked to better health. They’re more likely to have the physical space for a dog, which means they might have a higher income level. But even after adjusting for those and other confounding factors, evidence of a benefit appears to remain in the data, says Kazi. “After reviewing the literature, it’s my conclusion that there is very likely some effect from having a dog,” he says.

Studies show that people who have a dog exercise more and spend more time outside, when compared with those who don’t, says Kazi. This is true simply because people have to walk their dogs and care for them. Both the exercise and the outdoor time can bring benefits, such as lowering blood pressure and cholesterol and improving heart rate.

Dogs may also have an effect on the human body’s intestinal bacterial population known as the microbiome, because they introduce germs to the home, says Kazi. These microbiome changes may help heart health, an effect similar to that seen when you eat healthy probiotics found in fermented foods.

Looking to improve your heart health? You might want to think about getting a dog.

Can cat lovers get the same benefits? “The available evidence is almost entirely about dogs,” Kazi says. There may be some mental health benefits from cat ownership. But you’re not getting the same physical benefit of exercising. Until there are more studies, it’s hard to extrapolate these findings to other pets, he says.

Watch this little girl swim with her 11-foot pet python

Watch this little girl swim with her 11-foot pet python 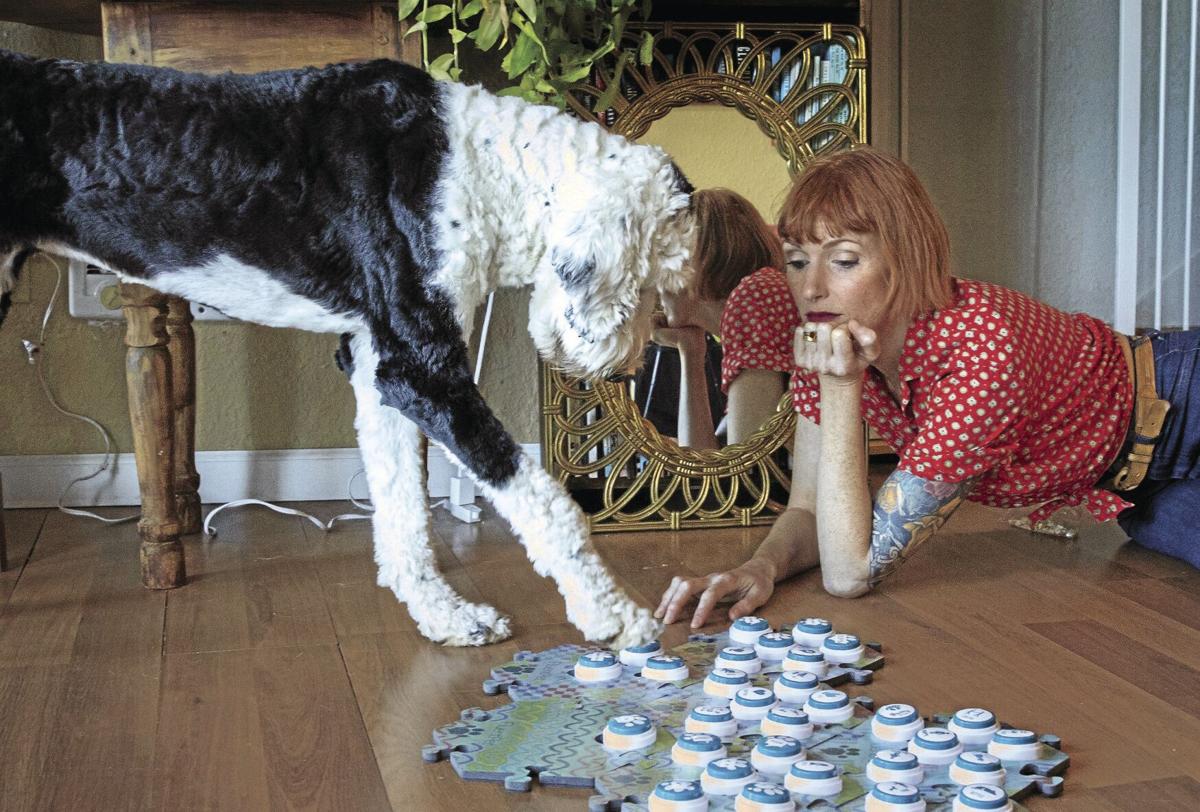 After telling her dog Bunny that she loves her, Alexis Devine waits for a response. Bunny taps on the button that says "thank you" at their Tacoma, Wash., home. 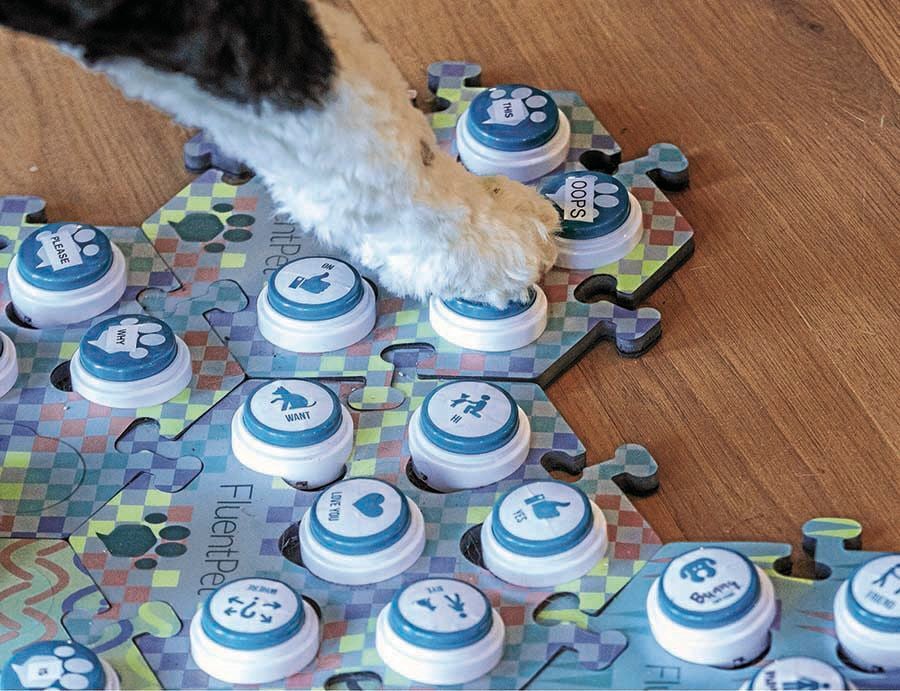 Mounted onto the tiles are 65 buttons with different words that Bunny is either learning or already knows.