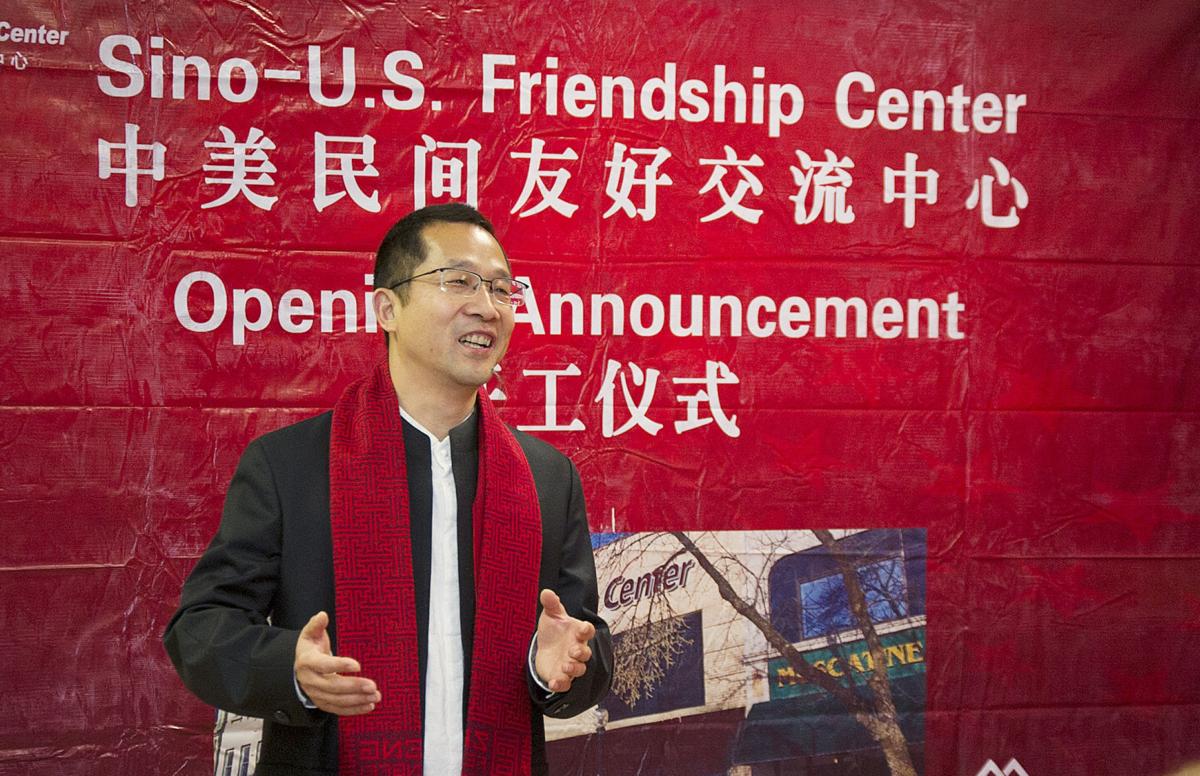 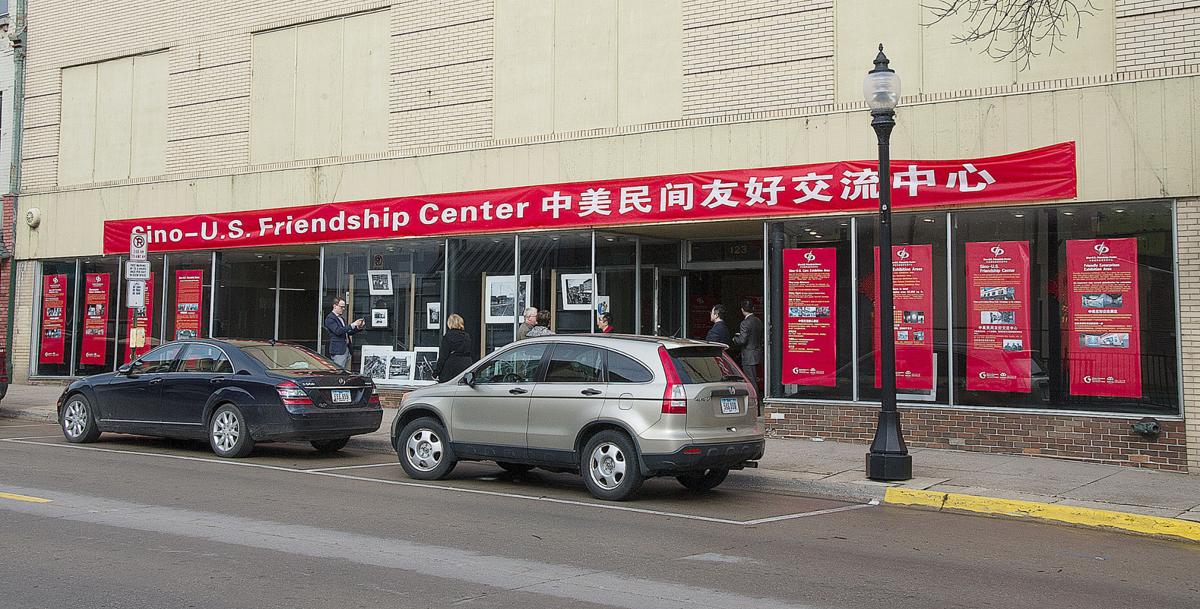 The new Sino-U.S. Friendship Center is located next to the Muscatine History and Industry Center on West 2nd Street in downtown Muscatine. It is expected to open in September. 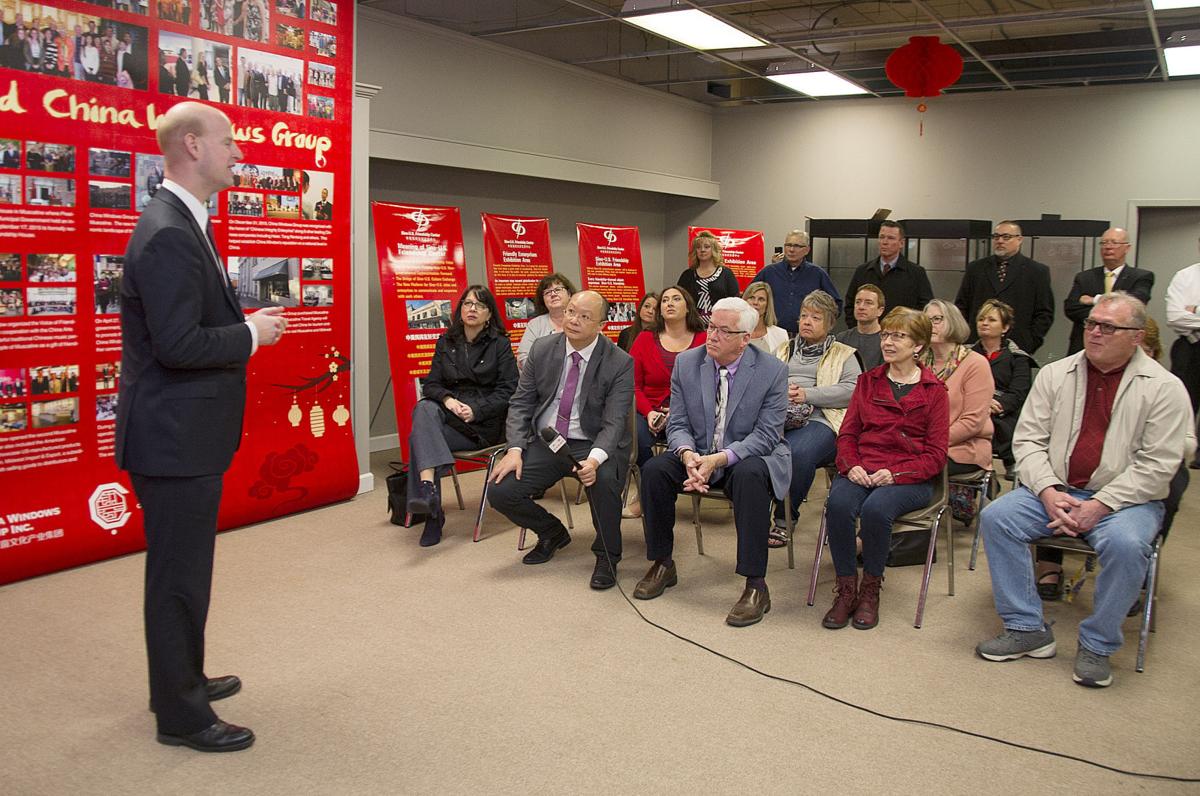 Dan Stein, vice president of the Muscatine-China Initiatives, welcomes people to an announcement of the new Sino-U.S. Friendship Center Monday in the former Marie Lindsay location in downtown Muscatine.

MUSCATINE – Work is expected to begin this month to turn a former furniture store in downtown Muscatine into a Sino-U.S. Friendship Center that will add another link to the already strong relationship between the community and China.

Details about the 33,000-square-foot center were announced Monday by Glad Cheng, chairman of China Windows Group Inc., whose company has made several sizable investments in the river community he now calls home for half of the year. Cheng estimates the investment in the friendship center at $1 million, which includes the cost to purchase the building and the renovations.

With bright red posters on the windows of the former Marie Lindsay furniture store building at 129 W. 2nd St., the project has already drawn the curiosity of passers-by in the downtown area. The center is expected to open in September.

Cheng, 46, was all smiles as he welcomed Muscatine business and community leaders to the announcement event.

Addressing the gathering, Cheng said he realized many Americans do not know much about China.

He hopes the Sino-U.S. Friendship Center goes a long way to change that.

“I want to show you Chinese tea, Chinese acupuncture, Chinese food,” he said. He said what Americans hear in the news about China isn’t the whole story. It’s important that people of both countries get to know each other, he said. That’s been the foundation of the Muscatine-China friendship.

Daniel P. Stein, senior vice president and senior loan officer at CBI Bank & Trust and chairman of the Muscatine-China Initiatives Committee, said establishment of the friendship center will build upon the “tremendous amount of momentum” in Muscatine, including the construction of the $42-million-plus Merrill Hotel and Conference Center across the street.

“This is one more pillar to make Muscatine the best it can be,” Stein told the gathering.

During a week when Chinese President Xi Jinping is scheduled to meet in Florida with President Donald Trump, Muscatine leaders were reminded of how the China connection began — with Xi’s visit to the community in 1985 with a group to study agricultural methods in Iowa and later, in 2012, when he returned as vice president of China to meet with the Muscatine residents he calls his “old friends.”

Sarah Lande, one of the “old friends” of Xi’s and who hosted the 2012 meeting in her home, encouraged Muscatine residents to become involved in the friendship with China.

The Core Exhibition Area will be considered the main part and will feature key events in the relationship between China and the United States, including the “ping pong diplomacy” of the 1970s, the Flying Tigers U.S. aviators who flew for China during World War II, and a Hall of Fame.

The Friendly Enterprises Area will be an opportunity for businesses to show how they have worked to accelerate the Sino-U.S. friendship.

Diplomacy in many facets of the relationship between the two countries will be shown through photos, videos and interactive exhibits.

Cheng said when the center opens in September, visitors will get the “first feel of China here.” He is hopeful, too, that more Americans will become interested in traveling to China. To that end, Muscatine Travel, the travel agency owned by China Windows Group, will move from its current location at 104 W. 2nd St. to the friendship center after it opens.

Andrea Kreitner, travel consultant, said the agency has arranged tours in China and will be bringing Chinese citizens to Muscatine as well.

Mary Wildermuth, director of the Muscatine History and Industry Center at 117 W. 2nd St., said the neighboring centers will complement each other.

“It will definitely augment the growth of downtown,” she said.

A two-man reporting crew based in Washington, D.C., from China Network Television also was on hand to do a story about the friendship center.

Chinese citizens have become familiar with Muscatine through two Muscatine Centers established by Cheng in the cities of Yiwu and Jinan. Those two cities have a combined population of more than 8 million people.

Liz Boardman is the Quad-City Times City Editor, manages the Economy section and Bettendorf News, and is the house Freedom of Information Act geek. A Rock Island native, she joined the Times in 2016.

Two arrested in Wapello after investigation into identity theft and narcotics

WAPELLO — Two arrests have been made in connection with a fraud, identity theft and narcotics investigation, the Louisa County Sheriff’s Depar…

The new Sino-U.S. Friendship Center is located next to the Muscatine History and Industry Center on West 2nd Street in downtown Muscatine. It is expected to open in September.

Dan Stein, vice president of the Muscatine-China Initiatives, welcomes people to an announcement of the new Sino-U.S. Friendship Center Monday in the former Marie Lindsay location in downtown Muscatine.